One 63-year-old woman, who presented with cholestatic jaundice due to common bile duct compression produced by primary retroperitoneal fibrosis, is studied. The patient was operated six years ago because of hydronephrosis, when the disease was first diagnosed. Magnetic resonance cholangiopancreatography (MRCP) revealed the presence of extrahepatic bile duct obstruction, which once was considered to be pathognomonic of pancreatic cancer. CT-scan demonstrated the change of retroperitoneal fibrosis around left kidney, atrophy of right kidney, and obstruction of extrahepatic bile duct (pancreatic head). An explorative laparotomy was performed, and the retroperitoneum and pancreas were grayish-white and hard, the fibrotic pancreatic head compressed the common bile duct. Bile duct stricture was managed by Rouxen-Y hepatocholangio-jejunostomy. To the best of our knowledge, few similar cases of retroperitoneal fibrosis have been reported.

Retroperitoneum is one of the most complex regions of human anatomy as it contains a variety of organs and structures from different systems, in particular those belonging to the urinary and digestive tracts and the vascular systems. Primary retroperitoneal fibrosis (Ormond’s disease) is a rare disorder typically with an insidious clinical course, characterized by the presence of dense, grayish-white plaques centered around the abdominal aorta in this space. The peak incidence of this uncommon disease is between the ages of 40 and 60 years and mostly in men[1]. Most commonly, it causes fibrous encasementb of the ureters and subsequent obstructive hydronephrosis. Atypical sites of involvement include the duodenum, colon, urinary bladder, mesentery, small intestine and epidural space. Typically, mass effect from the enlarging fibrosis plaque leads to compromise of surrounding structures. For example, extrinsic compression can lead to small and large bowel obstruction, vena cava stasis, and arterial insufficiency in lower extremities.

In this report, we describe an unusual case of this rare disorder, which presented with obstructive jaundice caused by the compression of common bile duct due to the involved diffusive pancreatic fibrosis. To the best of our knowledge, few similar cases of Ormond’s disease have been reported.

One 63-year-old woman was sent to our hospital because of jaundice, slight loss of weight and anorexia in October 2003. The patient was operated six years ago because of hydronephrosis, when the Ormond’s disease was first diagnosed. After operation, no corticosteroid was administrated and no reopening of the ureter was observed up to the admission to our hospital. Her antihypertensive medications included Fufangluobuma (TCM compound) and metoprolol. 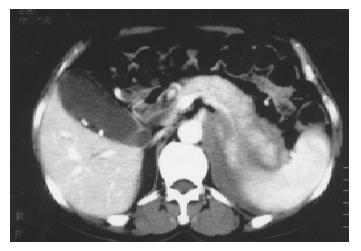 Figure 1 CT-scan demonstrated the change of retroperitoneal fibrosis around left kidney, atrophy of right kidney. The den-sity of the whole pancreas was homogeneous. 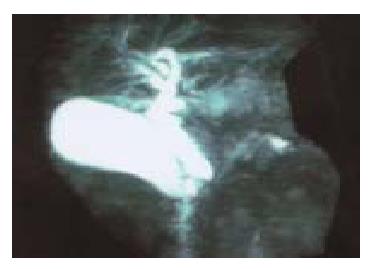 A presumptive diagnosis of pancreatic cancer or cholangio-carcinoma was made and an explorative laparotomy was performed. We found that the retroperitoneum and pancreas were grayish-white, and the consistency of them was hard (Figure 3). The fibrotic pancreatic head compressed the common bile duct. Then the gallbladder was resected and a Rouxen-Y hepatocholangio-jejunostomy was constructed. Adjacent lymph nodes were not enlarged or malignant. The patient recovered fully after surgery. 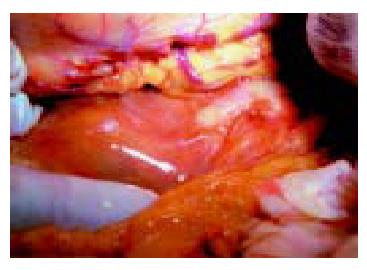 Figure 3 Retroperitoneum and pancreas were grayish-white and hard.
DISCUSSION

Ormond’s disease is a rare disorder characterized by transformation of normal fat tissue into a retractile fibrosis mass. Although the etiology of this chronic process is still unclear, the proposed mechanism is thought to be an autoimmune disorder secondary to the development of antibodies produced against ceroid, a polymer of oxidized lipid and protein[2,3]. This hypothesis is based upon the finding of association between atherosclerotic plaques of the aorta and retroperitoneal fibrosis[4,5]. It is thought that inflammatory antigens like ceroid pass through the adventitia into the periaortic fatty tissue and produce a periaortic and periarterial fibrosis[6-8]. In addition, several pharmacological substances have been cited as possible causative agents of retroperitoneal fibrosis[3]. Methysergide is the only drug that has been proved to cause retroperitoneal fibrosis[2]. Other suspected causative drugs include β -adrenergic blockers, antihypertensives, analgesics[3]. The medications of this patient included metoprolol, which is a kind of β -adrenergic blocker, but we were not able to identify the exact etiologic agent of this disease.

The presentation of retroperitoneal fibrosis in this patient was unique for two reasons. Ormond’s disease often manifests clinically by constriction and compression of ureters, blood vessels and nerves. This patient had had an initial manifestation of Ormond’s disease affecting left ureter before this admission. Uncommonly, upon this admission she presented with clinical manifestation of obstructive jaundice, which was due to the compression of portions of the common bile duct. There have been only 9 reports of retroperitoneal fibrosis with cholestatic jaundice due to compression of the distal part of the common bile duct by fibrotic pancreatic head[9-15]. A second distinctive feature of this Ormond’s disease case was the direct involvement of the pancreas, which has not previously been highlighted and led to diagnostic difficulty. Obstructive jaundice due to the retroperitoneal fibrosis of pancreas head is easy to mimicking the carcinoma of pancreas. In some authors’ opinion, sclerosing pancreatitis due to retroperitoneal fibrosis as this patient has been classified into the new clinical entity-“autoimmune related pancreatitis” or “autoimmune pancreatitis”.

Management of retroperitoneal fibrosis includes surgical relief of extrinsically compressed or encased structures, deep tissue biopsies to confirm the diagnosis and to exclude the malignant variant, and the use of corticosteroids (and other immunosuppressants) to prevent further progression of the disease[2]. There is no definitive duration or dosage of corticosteroids recommended for the therapy of this disease. This patient did not take corticosteroids.

In conclusion, this atypical retroperitoneal fibrosis illustrates that this disease involves the pancreas, and diffusive pancreatic fibrosis (sclerosing pancreatitis) can affect the common bile duct to manifest the initial symptom of cholestatic jaundice. Additionally, surgeons should pay attention to this condition mimicking pancreatic carcinoma or cholangiocarcinoma.