AIM: To construct a pEgr-IFNγ plasmid and to investigate its expression properties of interferon-γ (INF-γ ) induced by irradiation and the effect of gene-radiotherapy on the growth of melanoma.

METHODS: A recombined plasmid, pEgr-IFNγ , was constructed and transfected into B16 cell line with lipofectamine. The expression properties of pEgr-IFNγ were investigated by ELISA. Then, a B16 melanoma-bearing model was established in mice, and the plasmid was injected into the tumor tissue. The tumor received 20 Gy X-ray irradiation 36 h after injection, and IFN-γ expression was detected from the tumor tissue. A tumor growth curve at different time points was determined.

Radiotherapy is one of the treatments for cancer. However, its therapeutic effect is still unsatisfactory, and thus new therapeutic strategy must be adopted. Gene therapy in combination with radiotherapy is one of the most important advances[1-4]. The introduction of Egr-1 promoter induced by irradiation has provided a possible approach to this combination therapy[5-6].

IFNγ is the first cytokine produced by gene engineering and used for treatment of carcinoma, and has anti-tumor effects. Its antitumor mechanism includes direct inhibition of tumor cell proliferation, and indirect action by activating cytotoxic activities[7-18]. In the present study we constructed the pEgr-IFNγ plasmid by connecting IFNγ cDNA to Egr-1 promoter to investigate its expression properties in B16 cells and its antitumor effect in mice.

The expression vector for pEgr-IFNγ is shown in Figure 1. 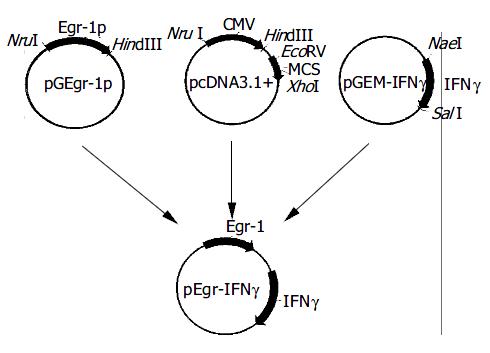 B16 cell line was cultured in MH Radiobiology Research Unit of Jilin University and maintained in RPMI 1640 (Life Technologies) with 100 mL/L fetal bovine serum (Hyclone Laboratories), L-glutamine, 100 μg/mL of streptomycin, and 100 U/mL of penicillin. The cell line was incubated at 37 °C in 50 mL/L CO2.

B16 cells were transfected in a 6-well plate when the cells reached 70% confluence. Solution A was prepared by addition of 10 μg of pEgr-IFNγ or pcDNA3.1+ to 100 μL serum-free medium (SFM), and solution B by addition of 10 μL liposome to 100 μL SFM. Solutions A and B were mixed at room temperature for 30 min, then mixed with 0.8 mL SFM, the mixture was added to the rinsed cells. The medium was replaced with fresh and complete medium 6 h after transfection.

Supernatants from different groups were collected for detection of the IFNγ expression with ELISA kit (Genzyme).

Establishment of B16 melanoma-bearing model

Adult female Kunming mice were provided by the Experimental Animal Center of Jilin University, with an average weight of 18 ± 2 g.

A melanoma-bearing model was established by subcutaneous injection at right hind limb with 0.1 mL B16 cells (5 × 10 6 /mL), 10 d later, tumor tissue received multi-focus injection of plasmids packaged with liposome (20 μg plasmid and 0.1 mL liposome per mouse) for the experimental groups.

Tumor size was measured. Then, tumor volume (V) was calculated according to the formula: V (mm3) = L × W 2/2, where, L: the longest diameter of tumor; W: the diameter at right angles on the largest horizontal section. Tumor growth rate (f) was the ratio of the volume at different time points over the initial volume (V0).

Pre- and post-transfection of B16 cells are shown in Figure 2. 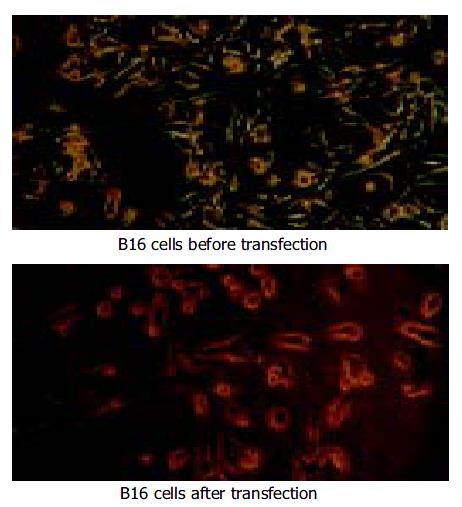 Figure 2 Pre- and post-transfection of B16 cells.
IFNγ expressions in B16 cells transfected with pEgr-IFNγ after different doses of X-irradiation

After transfection B16 cells received different doses of X-ray irradiation. The cells of control group were transfected with pcDNA3.1+ plasmid. Six hours after irradiation IFNγ expression and mRNA level were detected. 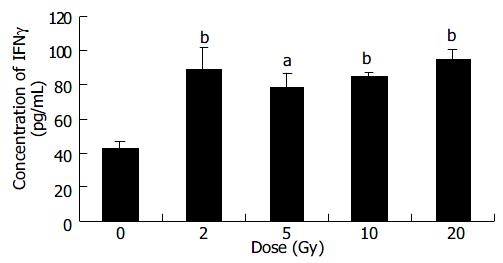 After irradiation IFNγ mRNA could be detected in B16 cells (Figure 4). The level of IFNγ mRNA was compared with that of GAPDH, and their ratios are shown in Table 1. The IFNγ mRNA levels in 2-20 Gy groups were higher than that of 0 Gy group.

After transfection B16 cells received 2 Gy irradiation while the control group received sham irradiation. IFNγ expression was detected 6 h later. Irradiation and detection were repeated 5 times at an interval of 24 h. 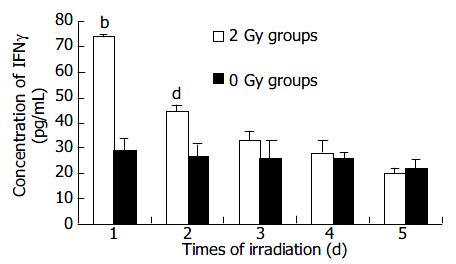 Melanoma-bearing mice of different groups were shown in Figure 7. 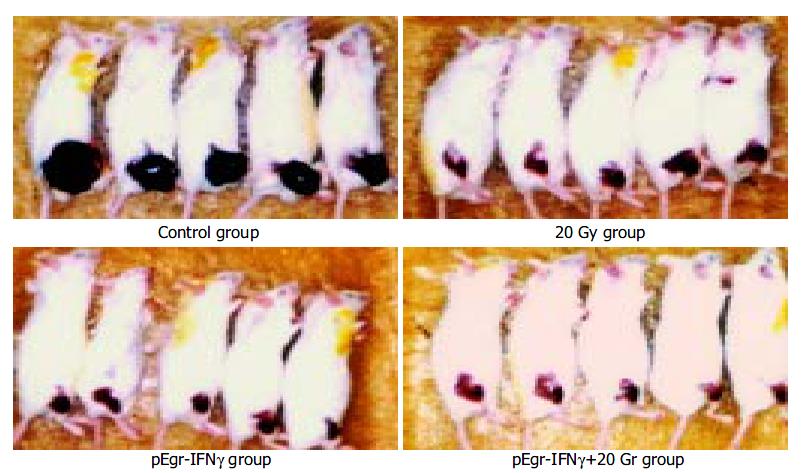 In 1992 Weichselbaum put forward the new therapeutic strategy that took advantage of the dual tumor-killing effects of genetherapy and radiotherapy, namely, to choose certain exogenous genes that could be activated by irradiation and then transcript some cytotoxic proteins to kill the tumor cells. They also established the techniques that might be used for target gene therapy of carcinomas[19-25].

It had been reported that Egr-1 was transcriptionally induced by exposure to irradiation, and its induction by irradiation was conferred by serum response or CC (A/T) rGG elements in its promoter region[26-30]. Based on this finding, we firstly connected IFNγ cDNA with Egr-1 promoter to construct pEgr-IFNγ plasmid to investigate the expression properties in B16 melanoma cells. Furthermore, a melanoma model was established by subcutaneous injection of B16 cells, and then plasmids were injected to observe its antitumor effect in vivo.

Secondly, the results of in vivo experiments showed that the proliferation of melanoma was significantly inhibited in pEgr-IFNγ group in comparison with control group between 6 and 15 d after irradiation (P < 0.001). So was pEgr-IFNγ gene-radiotherapy group compared with control and 20 Gy groups between 3 and 15 d after irradiation (P < 0.001). IFNγ expression was detected in melanoma tissue having receivied injection of pEgr-IFNγ plasmid. These results demonstrated that injection of pEgr-IFNγ improved antitumor effect, and combined pEgr-IFNγ and irradiation showed the most optimal effect.

This study combined pEgr-IFNγ plasmid and irradiation, and demonstrated much more enhanced antitumor efficacy than either one in the melanoma model. It was very easy to administer directly the plasmid into melanoma tissue, and therapeutic dose could also be administered as required. The tumor could be effectively exposed to radiation with external beam or intratumoral sources, or both, to enhance local IFNγ expression and boost local tumor control. Increased IFNγ levels might elicit systemic mediators, such as cytokines and matrix proteinases, which target occult distant metastases and thereby further enhance the therapeutic ratio. The absence of systemic toxicities with intratumoral administration of IFNγ supports the safe addition of pEgr-IFNγ gene radiotherapy to current antitumor protocols.