RESULTS: The expressions of hB1F were shown in livers from 6 of 7 transgenic mouse lines. The overexpression of hB1F transgene did not cause pathological changes. Expressions of three genes were up-regulated, while down-regulation was observed for 25 genes.

CONCLUSION: The overexpression of hB1F transgene may cause changes of gene expression profiles in the liver of transgenic mice.

Human hepatitis B virus enhancer II B1 binding factor (hB1F, also known as LRH-1, hFTF, CPF) belongs to the fushi tarazu factor 1 (FTZ-F1) nuclear receptor subfamily, which was formally designated as NR5A2[1-3]. Like other FsTZ-F1 receptors, hB1F contains a particular FTZ-F1 box which is located at the C-terminus of the DNA-binding domain (DBD) and binds to the response element as monomer[1]. The biological function of hB1F is just being unveiled. It has been reported that hB1F and/or its rodent homologs play an important role in regulating the liver-specific expression of several genes[4,5]. Recent findings pinpoint hB1F as a critical transcription regulator in bile acid biosynthesis[2,6,7], cholesterol homeostasis[8-10], sex hormone biosynthesis[11-13], and lipid metabolism[14].

Expression of the transgene

Total RNA was isolated from tissues with the TRIzol reagent (Invitrogen) according to the manufacturer’s instructions. Semiquantitative RT-PCR reactions were performed with primer pair sets 5’-CCGACAAGTGGTACATGGAA-3’ and 5’-CTGCTGCGGG TAGTTACA CA-3’ for hB1F cDNA, and 5’-AACTTTGGCATTGTGGAAGG-3’ and 5’-TGTGAGGGAG ATGCTCAGTG-3’ for mouse glyceraldehyde-3-phosphate dehydrogenase (GAPDH) cDNA, which resulted in the generation of 300 bp and 600 bp products, respectively. PCR reactions were performed 30 cycles at 94 °C for 1 min, at 57 °C for 1 min, and at 72 °C for 1 min. PCR products were electrophoresed on 15 g/L agarose gels.

For Western blotting, protein samples from tissues were prepared according to the protocol from Santa Cruz Biotechnology, Inc. Each protein sample (50 μg) was electrophoresed on 100 g/L SDS-polyacrylamide gel and transferred to PVDF membrane. Membranes were blocked with 50 g/L non-fat milk in Tween-TBS (TBST) overnight at 4 °C and incubated with the anti-Flag antibody (Sigma) at a dilution of 1:500 in TBST for 2 h at room temperature. Membranes were washed three times with TBST and incubated with a horseradish peroxidase-conjugated anti-mouse IgG at a dilution of 1:2000 at room temperature for 1 h. Immunodetection was carried out with an enhanced chemilu-minescence kit (Amersham Pharmacia Biotech) according to the manufacturer’s instructions.

Tissue samples were fixed in 10% (vol/vol) neutral formalin, embedded in paraffin, and sectioned for staining. Immunohisto-chemistry was performed on deparaffinized sections. Tissue sections were permeabilized with 3 g/L Triton X-100 in PBS for 30 min. After washed with PBS, sections were saturated for 30 min at room temperature with PBS containing 50 mL/L milk and then incubated for 1 h at room temperature with the anti-Flag antibody (1/250 dilution). This incubation was followed by five washes for 5 min in PBS-10 mL/L milk and then incubated with a sheep anti-mouse IgG (1/100 dilution) in PBS-milk for 1 h at room temperature. Sections were then washed five times for 5 min in PBS and coverslipped with 500 mL/L glycerol in PBS and examined under a microscope and photographed. Immunochemistry and pathological analyses were carrried out at the Department of Pathology, Changhai Hospital of the Second Military Medical University.

RNAs were isolated from livers of two male transgenic mice (TGM-4) and a male C57 mouse. Expressions of 8, 315 genes of the mice were analyzed by using BiostarM-80s cDNA arrays (Biostar genechip Inc., Shanghai, China). Control C57 mouse liver cDNA was labeled with fluorescence Cy3 and TGM-4 liver cDNA was labeled with fluorescence Cy5. Cy3 intensity values were adjusted to Cy3* by multiplying a normalization coefficient. The ratios of Cy5/Cy3* were calculated and genes were identified as either up-regulated when the ratio > 2, or down-regulated when the ratio < 0.5.

Primers used in PCR for CBG gene were 5’-TGTCGTCGCTGCA CTTAATC-3’ and 5’-AGCACATTCCCTTCATCCAG-3’, and for FPPS gene 5’-GGCCATGTGGATCT TGGTAG-3’ and 5’-GAGGAGAGGCTCGTAGCAGA-3’, which resulted in generations of 255 bp and 301 bp products, respectively. The cycling parameters were at 94 °C for 5 min, followed by 30 cycles at 94 °C for 1 min, at 57 °C for 1 min, and at 72 °C for 1 min. The PCR products were separated on 1.5% agarose gels. Signals were quantified by density analysis of the digital images using Alpha image software (Alpha Co., Ltd). 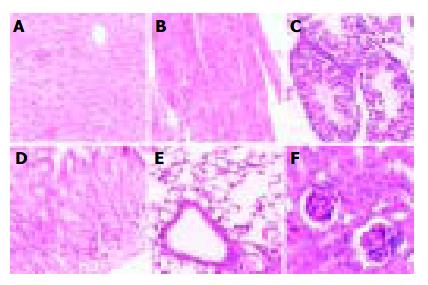 Based on the results of the microchip analysis, some of the differentially expressed genes including corticosteroid-binding globulin (CBG) and farnesyl pyrophosphate synthase (FPPS) were subjected to further analysis. Semi-quantitative RT-PCR was performed with samples used in the microchip analysis and also with additional samples from other transgenic lines, TGM-1, TGM-3, TGM-6, and TGM-7. The corticosteroid binding globulin (serine/cysteine proteinase inhibitor) gene was up-regulated in the liver of TGM-4 (Figure 5) and the farnesyl pyrophosphate synthase gene was down-regulated in all transgenic mouse lines (Figure 6). These results were well consistent with the microchip analysis data.

Figure 5 Semi-quantitative RT-PCR results of CBG expression in livers of TGM-4 and C57 control mouse. A: lane 1: DNA molecular weight marker DL2 000; lane 2: C57 control mouse; lane 3: TGM-4. B: The ratio of CBG/GAPDH was caclutated for each sample and used as an indication for the relative expression of CBG. The average value for the control was taken as 1. RT-PCR was repeated three times and the results were presented as mean±SE. Statistical significance was subjected to one-way ANOVA and Student-Newman-Keuls multiple range test. aP < 0.05 vs control.

Figure 6 Semi-quantitative RT-PCR results of FPPS expression in livers of TGMs and C57 control mouse. A: lane 1: DNA molecular weight marker DL2000; lane 2: TGM-1; lane 3: TGM-3; lane 4: TGM-4; lane 5: TGM-6; lane 6: TGM-7; lane 7: C57 control mouse. B: The ratio of FPPS/GAPDH was caclutated for each sample and used as an indication for the relative expression of FPPS. The average value for the control was taken as 1. RT-PCR was repeated three times and results were presented as mean±SE. Statistical significance was subjected to one-way ANOVA and Student-Newman-Keuls multiple range test. aP < 0.05 vs control.
DISCUSSION

In this report, we verified the expression of hB1F transgene in several transgenic lines we have constructed previously. Results from RT-PCR and Western blotting analysis indicated that hB1F transgene was expressed in livers of all transgenic lines but with different expression levels. Besides liver, the transgene was also expressed in other organs such as stomach and testis (data not shown). The tissue expression pattern of hB1F transgene was expected since the transcription of thet ransgene was under the control of the CMV early promoter which has a relative broad tissue expression range. Although hB1F was thought previously to be present mainly in liver and pancreas, recent data revealed that it could be expressed in many types of tissues, such as intestine[10,16], ovary[17], adrenal gland[12], and preadipocytes[11,18]. Therefore, the transgenic lines established and verified in this study would provide a valuable animal model for studying the function of hB1F in multiple tissues.

Given that hB1F plays an important role in cholesterol homeostasis and bile acid biosynthesis, it is somewhat unexpected that no discernable pathological changes resulting from the overexpression of hB1F transgene have occurred in these transgenic lines. It is possible that the overexpression of hB1F might negatively feedback on the expression of the endogenous mouse counterpart of hB1F, mLRH-1. It remains to determine whether the expression of the enodgeous mLRH-1 changes in cells overexpressing hB1F. On the other hand, it is apparent from the microchip analysis that the expression of some genes were altered in livers of these transgenic lines. Since disturbance to metabolic pathways such as the cholesterol homeostasis might require a long incubation time before any pathological phenotypes could be observed, it is necessary to perform a long term follow-up investigation on the possible pathological changes.

Among the genes identified to exhibit altered expressions in hB1F transgenic mice, the gene that encodes the farnesyl pyrophosphate synthase (FPPS) is the most interesting one. FPPS could catalyse the formation of farnesyl pyrophosphate (FPP) through the condensation of dimethylallyl pyrophosphate with two molecules of isopentenyl pyrophosphate. FPP is a key cellular intermediate for the biosynthesis of isoprenoids and a precursor of cholesterol, steroid hormones, dolichols, haem A and ubiquinone. Furthermore, it has been found that FPP and its derivative geranylgeranyl pyrophosphate are involved in prenylation, a post-translational modification of a variety of cellular proteins that influence their proper cellular localizations and biological functions[19]. The semi-quantitative RT-PCR results confirmed the down-regulated expression of FPPS in all transgenic lines, suggesting that inhibition of the expression of FPPS has a general effect on hB1F transgenic mice, unrelated to other reasons such as the position effect due to the integration of the transgene. Given the complexity of the regulatory network for the cholesterol homeostasis, it is still early to speculate on the molecular mechanism underlying the inhibition of expression of FPPS in hB1F transgenic mice. Whether hB1F directly or indirectly inhibits the expression of FPPS awaits future study.