AIM: The protective effects of sodium butyrate and NSAIDs (especially the highly selective COX-2 inhibitors) have attracted considerable interest recently. In this study, primary adenoma cells and HT-29 were used to investigate whether the above drugs would be effective for reducing proliferation and inducing apoptosis. Additionally, it was investigated whether NSAIDs would strengthen the effects of sodium butyrate and its possible mechanisms.

METHODS: In vitro primary cell culture of colorectal adenomas and HT-29 were used for this investigation. PGE2 isolated from HT-29 cell culture supernatants was investigated by ELISA. MTT was employed to detect the anti-proliferative effects on both adenoma and HT-29 culture cells. FCM was used for apoptosis rate and cell cycle analysis. The morphology of apoptotic cells was investigated by means of electromicroscopy.

Colorectal cancer remains the major cause of cancer-related mortality in the developed countries. With improvement in economic status, the incidence of colorectal cancer is increasing in China. Prevention of the disease is a more attractive approach to dealing with the problem than treatment of existing disease for both medical and fiscal reasons. Clinical evidences showed that removal of colorectal adenoma could attenuate 76%-90% risk of colorectal cancer, but the yearly relapse rate has reached 10%-15%. Therefore, the urgent task is to develop new strategies to prevent the disease. With regard to chemoprevention, butyrate sodium (sodium butyrate) and non-steroidal anti-inflammatory drugs (NSAIDs), especially selective COX-2 inhibitors have attracted more attention.

Evidences have shown that low fat and high dietary fiber diet could protect against colorectal cancer. Dietary fiber could be fermented by symbiotic bacteria in the large bowel and then a short chain fatty acid-butyrate, could be released. Clinical and laboratory studies showed that butyrate might be beneficial to the development of colorectal cancer and even in the early stage of its premalignant status[1].

NSAIDs have shown its promising role in colorectal cancer chemoprevention in recent years. Epidemic studies demonstrated that it might reduce 40%-50% risk of colorectal cancer in persons who took aspirin or other NSAIDs on a regular basis[2]. The most recognized target for NSAIDs was cyclooxygenase (COX), because COX-2 showed 86% and 43% expression in colorectal adenoma and carcinoma tissues respectively[17]. Furthermore, COX-2 selective inhibitors have attracted more attention because of their minimal risk of gastrointestinal side effects.

Although the precise mechanisms are unclear, sodium butyrate and NSAIDs are involved in chemoprevention of colorectal cancer. In this study, colorectal adenoma cells and HT-29 cells were used to investigate whether the above agents were effective in reducing proliferation and inducing apoptosis, and whether NSAIDs could strengthen the effects of sodium butyrate and its possible mechanisms.

HT-29 cells were seeded at a density of 1 × 10 6 cells/T25 flask for 48 h, and then treated with medicine for 24 h or 72 h separately. Aliquots of culture medium (1 mL) were stored at -70 °C until assayed (In NSAIDs treatments and control groups, an exogenous supply of 10 µmol/L AA was added to pre-treat for 30 min individually). Immunoassay was carried out according to the manufacturer’s protocol. The sensitivity of the assay was 10 pg/mL.

Cell proliferation of both primary adenoma cells and HT-29 was assessed by MTT. After seeded at a density of 2 × 10 4 cells/well for 96 well plates with 100 µL media for 48 h, the cells were treated with medicine for 24 h or 72 h separately. At the end of incubation, the medium was removed and 20 µL MTT solution was added to each well. Then DMSO was added to each well, the optical density of each well was read on the plate reader at 570 nm.

After HT-29 cells were harvested , they were fixed in 700 mL/L ethanol overnight at 4 °C, mixed with PI staining fluid for 20 min at 4 °C and then filtered. At last, the samples were examined by FCM.

The collected HT-29 cells were fixed in 30 g/L glutaraldehyde, then rinsed in 10 g/L osmium textroxide for 30 min at 4 °C, dehydrated through a series of acetone, embedded in EPON polymerized at 60 °C, stained with uranyl acetate and Raynold lead citrate. Finally, the sections were examined under an electron microscope.

But for adenoma cells, the results were different in repeated experiments. Only treatment with Sodium butyrate and NS-398 for 72 h showed the synergistic effects on 28.6% adenoma specimens (P < 0.05).

Moreover, HT-29 cell cycle distribution was analyzed by FCM. Both Sodium butyrate and NSAIDs could arrest the cell cycle in S phase compared with the control (P < 0.05), but the response to G1/G1 or G2 phase was different.

Induction of apoptosis effects was dose-dependent in HT-29

Normal primary culture cells and HT-29 showed irregular polygon-appearances. The cells treated with the drugs shrank and became round, then shad from the wall and floated in the fluid. The floating cells showed blue coloration by trypan blue staining, while the attached cells were achromatical.

To confirm the induction of apoptosis, the morphological appearances of HT-29 cells were examined by elecotromicroscopy. Typical apoptotic appearances are shown in Figure 1, which included cell shrinkage, nuclear condensation, and formation of apoptotic bodies, etc. 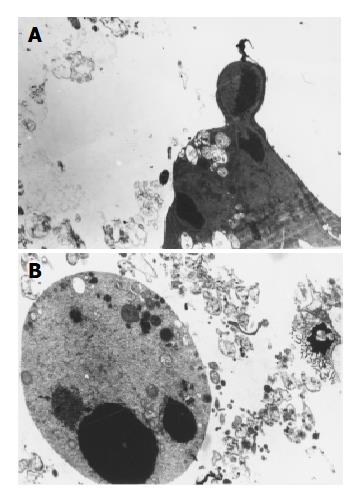 In recent years, the incidence of colorectal cancer is increasing in China. Prevention of the disease is a more attractive approach in the early stage of adenoma-cancer progression. Butyrate and NSAIDs (especially highly selective COX-2 inhibitors) have attracted considerable attention recently.

As a byproduct of carbohydrates fermented by symbiotic bacteria, butyrate has been demonstrated its important role in inhibiting cell growth and in inducing apoptosis of colorectal cancer cells in vitro[3]. Clinical case-control and cohort studies have shown a 40%-50% reduction in colorectal cancer-related mortality in individuals taking aspirin and other NSAIDs on a regular basis compared with those not taking these agents[2]. Aspirin serves as a typical representative of classical NSAID agents. As a highly selective COX-2 inhibitor, NS-398 showed higher selective effects than others. Its IC50 (COX-2/COX-1) was 0.0005, while L-745, 337 was 0.003, flosulide was 0.001[4], rofecoxib was 0.0012[5]. Although the precise mechanism underlying the protective effects of NSAIDs is unclear, COX-2 could play a key role in intestinal tumorigenesis[6] and has been a widely recognized target because of its high expression in colorectal adenoma and cancer tissues[7-10]. The COX-2-dependent mechanism involving in increased angiogenesis[11-13], could reduce apoptotic susceptibility by inhibiting the cytochrome c-dependent apoptotic pathway[14]. Down-regulation of bcl2 and CD44v6 expression and up-regulation of nm23 expression[15] could inhibit death receptor 5 expression and confer resistance to tumor necrosis factor-related apoptosis-inducing ligand (TRAIL)-induced apoptosis[16]. However, some COX-independent ways, such as lipoxgenase (LOX) another AA metabolic enzyme, could modulate sodium butyrate-induced apoptosis and cell differentiation[17]. Leukotriene (LT) D (4)/CysLT (1) R signaling could facilitate survival of colon cancer cells and LTs were accessible targets for pharmacologic treatment like COX-2[18], NF-KB/I-KB system[19]. Activated Ras and TGF-β could collaborate to increase the invasive response[20], etc, which have been shown to be involved in the protective mechanism. In this study, adenoma cells and HT-29 were investigated whether Sodium butyrate and aspirin/NS-398 were the effective adjuvants for the protective effects.

The relationship between PGE2 (an AA metabolize product) and colorectal carcinogenesis is still disputed. Generally, PGE2 could combine with the transcription factor PPARr, which activates the target gene transcription and promotes carcinogenesis[21]. PGE2 could also increase bcl-2 expression and inhibit cell apoptosis[22] and was involved in the angiogenesis of cancers. So it has been implicated that PGE2 inhibition is the main mechanism of anticarcinogenesis of NSAIDs. But a positive result showed that exogenous PGE2 could not reverse the antineoplastic effects of sulindac sulfone[23]. In this study, PGE2 production was investigated to reflect the COX-2 enzyme activity indirectly. For HT-29, Sodium butyrate could stimulate its PGE2 secretion in a time- and dose-independent manner, suggesting that it could increase its COX-2 enzyme activity. In contrast, NSAIDs inhibited PGE2 production. Although previous evidence displayed that the expression of COX-2 was increased by some NSAIDs and TGF-β [24], we proposed that the inhibited enzyme activity would still down-regulate the effects of NSAIDs.

Sodium butyrate could reduce cell proliferation and induce cell apoptosis in a time- and dose-dependent manner. The possible mechanism has been known to involve in a large number of parameters, including inhibition of histone deacetylase and induction of caspase-3 protease activity with a mitochondrial/cytochrome c-dependent pathway[25] , enhancement of Fas-mediated apoptosis[26], inhibition of P53 expression[25]. Down-regulation of GATA-6 and up-regulation of 15-LO-1 were observed after treatment with sodium butyrate (sodium butyrate), which was also involved in stimulating cell apoptosis and cell differentiation[27]. NSAIDs had the same effects on both cell lines. This was not in a time- and dose-dependent manner. Therefore, it implied that anti-neoplastic mechanisms of NSAIDs were COX-2-dependent and COX-2-independent.

Previous studies revealed that COX-2 expression up-regulation would induce resistance to apoptosis induced by sodium butyrate. Because NSAIDs could down-regulate COX-2 expression, whether NSAIDs could sensitize the cells to the action of sodium butyrate and reduce the potential side-effects and increase the efficacy by using both drugs was investigated in this study. The data showed that NSAIDs inhibited the growth of HT-29 by sodium butyrate by down-regulating COX-2 expression. It was in agreement with the previous studies. In contrast, other studies reported that cooperation with the two agents was greatly dependent on the category of cell lines and NSAIDs, especially highly selective COX-2 inhibitors showed more preferential effects. Only HT-29 cell line was investigated in this study, so it was necessary to investigate other cell lines for more precise results. Cooperation with the two drugs could affect the two cell lines differently. The effects on HT-29 were completely shown, but only 28.6% was positive for primary adenoma specimens. The main cause depended on the adenoma samples. Additionally, treatment with NS-398 and sodium butyrate had more preferential effects than that with aspirin and sodium butyrate, suggesting that specific selective COX-2 inhibitor NS-398 had a more promising future in clinical application.

In summary, sodium butyrate and NSAIDs could inhibit the cell proliferation and induce cell apoptosis through a number of mechanisms. Combination of two kinds of agents would enhance the above effects by down-regulating COX-2 expression, which could serve as a promising chemoprevention for colorectal neoplasm.