AIM: To assess the microscopic spread of low rectal cancer in mesorectum regions to provide pathological evidence for the necessity of total mesorectal excision (TME).

CONCLUSION: Results of the present study support that complete excision of the mesorectum without destruction of the ORM is essential for surgical management of low rectal cancer, an optimal DMR clearance resection margin should be no less than 4 cm, further pathologic assessment of the regions in extramesorectum in the pelvis is needed.

Local tumor recurrence after surgical resection of rectal cancer remains a major problem. Since Heald et al[1] first reported evidence of isolated tumor deposits in the mesorectum, more authors have demonstrated that residual foci of the tumor within pelvis resulting from inadequate excision of the mesorectum were the cause of such recurrence[2,3]. Further studies revealed that remnant of microscopic tumor nodules in the mesorectum, which cannot easily be detected by imaging preoperatively or by palpation intraoperatively, other than large nodules, contributes to most of local failures[4,5].

Comparison of clinical outcomes between conventional surgery[6,7] and total mesorectal excision (TME)[1,8] showed that a proportion of microscopic tumor nodules of rectal cancer causing local pelvic collapse might settle in the outer region of mesorectum (ORM). Unfortunately, investigations on discrete tumor nodules spread in this region are rare. A comprehensive assessment of ORM in patients with low rectal cancer may provide further pathological evidence for supporting the TME procedure.

Although TME has been extensively employed as a standard procedure for surgical treatment of patients with low rectal cancer in western countries, conventional resection has been dominated in China due to little pathological information standing for TME. The present study investigated the regional spread of microscopic tumor nodules in mesorectum using whole-mount sections.

All patients were operated on by the same chief surgeon (Professor. Zhou ZG) and two assistants according to TME principles[1]. The rectum and mesorectum were mobilized as a package enveloped within the fascia properia with the preservation of autonomic nerves. Under direct vision, electrocautery was used to divide the rectosacral ligament posterior, the peritoneum posterior to the seminal vesicle in the males and the peritoneal reflection in Douglas’ pouch in the females anteriorly, lateral ligaments medial to the pelvic plexus laterally. Sharp dissection was continued down to the pelvic floor in front of Denonvilliers’ fascia anteriorly and along the fascia properia posteriorly. Eventually, over 2 cm of distal clearance margin of rectal wall and over 4 cm of mesorectum were attained by transecting the rectum without stretching the bowel wall[9].

Each specimen was straightened without stretching and pinned to a cork board, different from Quirke’s method[2]. The specimens were not opened longitudinally along the antimesenteric border, and fixed in 40 g/L buffered formaldehyde for 48 h. Serial longitudinal tissue blocks were cut at 5 mm intervals from the distal portion. Each block, consisting of the full thickness of the rectal wall with the mesorectum, was fixed in 40 g/L buffered formaldehyde for another 48 h, and then embedded in paraffin. Whole-mount sections of the bowel wall and mesorectum were sliced transversely on the embedded tissue blocks in 4 μm at 2.5 mm intervals, stained with hematoxylin and eosin (HE), and examined for discrete tumor nodules microscopically (Figure 1). Circumferential resection margin (CRM) involvement was assessed in the conventional manner[10]. 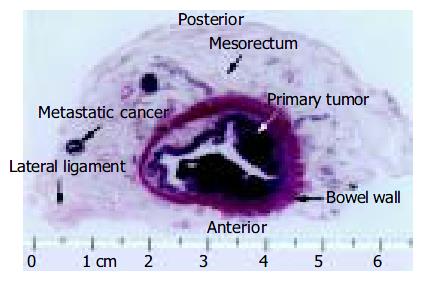 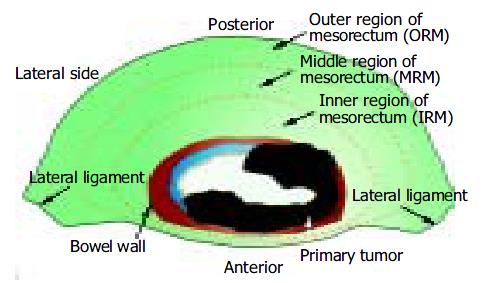 The clinicopathologic characteristics of the patients are summarized in Table 1. All the 62 patients underwent low anterior resection. In 52 patients (83.9%) the operation was potentially curative, while residual tumors in 2 patients (3.3%) were noticed to remain in pelvis on operation and distant metastases were observed in 8 patients (12.9%). 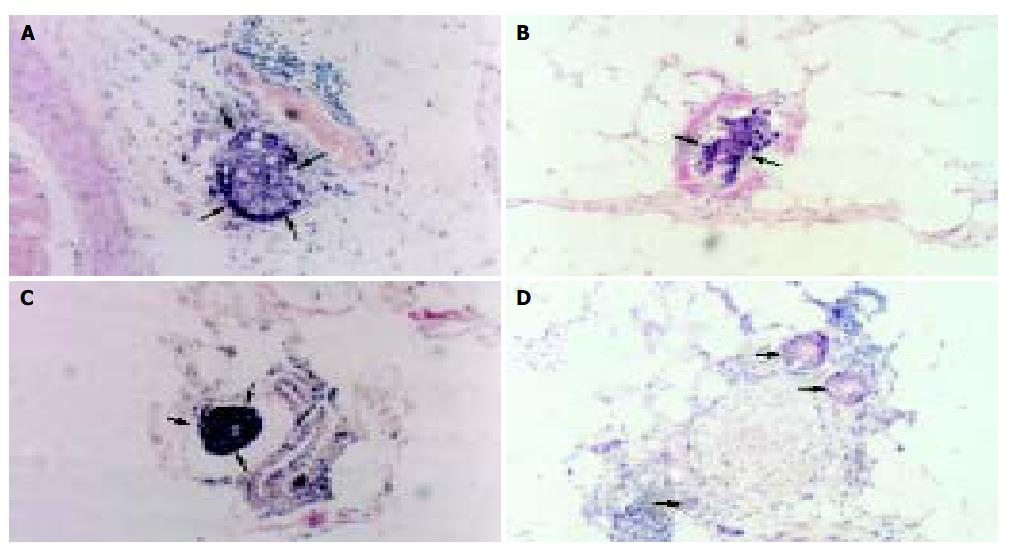 Figure 4 Microscopic tumor nodule spread (→) in outer region of the mesorectum (ORM) (4a), CRM (4b) and DMR(4c) , HE, × 100.
Microscopic spread of the tumor in circumferential resection margin

Four of 36 patients with tumor involvement of mesorectum and 2 of the 52 patients having potentially curative resections had microscopic spread in CRM.

Microscopic spread of the tumor in distal mesorectum

DMR with involvement of microscopic tumor nodules was observed in 4 patients. The utmost spread was 3.0 cm or less from the low edge of primary carcinoma. The most extensive distal infiltration was seen in two cases of Dukes stage C.

Microscopic spread nodules without involvement of lymph nodes or lymphatic vessels in mesorectum were observed in 18 patients, and such a spread in ORM was found in 13 patients (Table 3).

Whole-mount sections were used to facilitate the precise and effective assessment of rectal cancer, especially in mesorectal regional spread of discontinuous microscopic tumor nodules. All whole-mount sections showed that whole morphological features of the surgical specimen enclosing the primary tumor, bowel wall and the mesorectum, could be directly observed with naked eyes and by microscopy, which enabled the investigators to obtain valuable pathological outcomes on rectal cancer[2,11].

The present study showed the incidence of discrete microscopic tumor nodules was 38.7% (24 of 62) of patients in mesorectum and 25.8% (16 of 62) of patients in ORM. The high frequency of microscopic tumor nodules in mesorectum (especial ORM) highlighted the importance of complete excision of mesorectum with fascia propria circumferentially intact for low rectal cancer. Disturbance of ORM during operation would predispose local recurrence because the undetected microscopic foci in the mesorectum, especially in ORM were easily left behind in pelvis[4,12,13]. Frequency of CRM involvement after conventional resection was reported up to 27%[2,11,14,15], compared with 6.5% after TME[16,17], which is consistent with our findings. The decrease of CRM involvement rates after TME justified the theory: the frequency of microscopic spread in ORM could be very high, and destruction of ORM which often occurred in conventional resection, could easily lead to positive CRM.

Distal mesorectal spread can be evaluated pathologically after TME, after standard resection of the rectal cancer, the DMR remained inside pelvis[18]. Frequency of discrete tumor cancer spread 3 cm or more from the primary lesions in DMR varied from 0% to 10% of the cases[4,17,19-22], and discontinuous spread in DMR could be found even up to 5 cm beyond the lower margin of the primary tumor[1,6], some patients with DMR spread had poor prognosis[21-23]. The present study showed that four cases with tumor involvement of DMR had the spread within 3 cm of primary mural tumors, with a maximum of 3.0 cm. Therefore, we support a safe DMR resection margin of no less than 4 cm for lower rectal cancer, and consider that failure to adequate excision of the involved DRM would risk in leaving behind residual microscopic cancer foci in a significant percentage of patients. The most common pattern of pelvic recurrence is extramural diseases emanating from the sacral hollow or pelvic floor, which is entirely compatible with this hypothesis[24]. But others argued that pathological evidence of DMR spread in itself did not necessarily justify total removal of DMR in all cases because the local recurrence rate and survival rate were not improved significantly even after TME[4,17].

Kapiteijn et al[26] recently reported that standardized TME in combination with preoperative radiotherapy could significantly decrease the local recurrence rate in patients with rectal cancer, though its benefits in survival were not demonstrated because of a relatively short time of follow-up. Other authors also concluded that preoperative radiotherapy could improve the prognosis of patients with rectal cancer[27]. In our series, no patients were treated with adjuvant therapy due to the high frequency of postoperative complications and its controversial impact on prognosis.

Extended lateral dissection beyond the extent of TME has been widely accepted in Japan as the improvement in survival rates was reported[28,29], but some argued that it had a limited advantage in prognosis and the functional problems were considerable[30,31]. Microscopic tumor nodule involvement of CRM after TME in our series suggested that a proportion of the patients had microscopic tumor spread in the extramesorectal regions in the pelvis. Further comprehensive pathological assessment of the extramesorectum is required to evaluate the curative value of TME in rectal cancer.