AIM: To investigate the effect of schisandrin B (Sch B) on proliferation and apoptosis of human hepatoma SMMC-7721 cells in vitro and regulation of Hsp70 and Caspases-3, 7, 9 expression by Sch B.

RESULTS: Sch B inhibited the growth of hepatoma SMMC-7721 cells in a dose-dependent manner, leading to a 50% decrease in cell number (LC50) value of 23.50 mg/L. Treatment with Sch B resulted in degradation of chromosomal DNA into small internucleosomal fragments, evidenced by the formation of a 180-200 bp DNA ladder on agarose gels. FCM analysis showed the peak areas of subdiploid at the increased concentration of Sch B. The results of Western bolt analysis showed that Hsp70 was down-regulated and Caspase-3 was up-regulated, while the activity of Caspases-7, -9 had no significant change.

CONCLUSION: Sch B is able to inhibit the proliferation of human hepatoma SMMC-7721 cells and induce apoptosis, which goes through Caspase-3-dependent and Caspase-9-independent pathway accompanied with the down-regulation of Hsp70 protein expression at an early event.

Schisandrin B (Sch B, Figure 1) is a dibenzocyclooctadiene compound isolated from Fructus Schisandrae (FS, the fruit of Schisandra chinensis), an herb commonly prescribed in tonic and sedative formulae in Chinese medicine[1,2]. In clinical situations, FS was also found to produce beneficial effects on patients suffering from viral hepatitis[3]. Recently, the pharmacological profile of FS, which includes the enhancement of liver functions and inhibitory/sedative effects on the central nervous system, has been established by laboratory investigations[4-9]. We presented evidence that Sch B was able to inhibit the proliferation of human hepatoma SMMC-7721 cells and induce apoptosis in vitro. 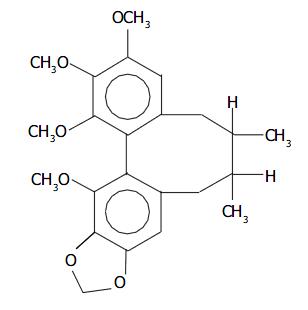 Figure 1 Chemical structure of Schisandrin B.

Apoptosis is an essential physiological process required for normal development and maintenance of tissue homeostasis[10,11]. Insufficient or excessive cell death can contribute to human diseases, including cancer, acquired immunodeficiency syndrome and some neurodegenerative disorders[12]. Although many factors are involved in apoptotic program[13-16], Caspases, a family of cysteine proteases have been shown to play a major role in the transduction of apoptotic signals and the execution of apoptosis in mammalian[17-21], which has become recognized as key components of the apoptotic machinery[22]. Most of the biochemical and morphological events of apoptosis are a direct result of Caspase-mediated cleavage of specific substrates[23,24] .

Inhibition of Caspases following treatment with apoptotic stimuli has been shown to prevent some features of apoptosis. The heat shock protein 70 (Hsp70) family of proteins has been demonstrated to be a potent inhibitor of apoptosis induced by a wide range of stimuli[25,26]. It can protect against apoptosis at an early event in the apoptotic pathway. A role for Hsp70 in tumorigenesis has been suggested, based on the observations that many transformed cells have elevated levels of Hsp70 and overexpression of Hsp70 in transgenic mice results in T-cell lymphoma[27-30].

SMMC-7721 cells (100 μL of cell suspension per well) were seeded at a density of 1.5 × 10 5/mL in 96-well plates. Each group had three wells with a non-treated group as control. When the cells anchored to the plates, various concentrations of Sch B were added and the slides were incubated at 37 °C in humidified atmosphere containing 50 mL/L CO2. When the cells described above were cultured for 48 h, 50 μL of MTT (2 mg/mL in PBS) was added to each well and cultured for another 4 h. After the supernatant was discarded, MTT formazan precipitates were dissolved in 100 μL of DMSO, shaken mechanically for 10 min and then read immediately at 570 nm in a plate reader. Cell proliferation inhibition rate (CPIR) was calculated using the following equation: CPIR = (1-average absorbance (A) value of experimental group/average A value of control group) × 100%.

HL-7702 cells, ECV-304 cells, primary human fibroblast cells, human lymphocytes (100 μL cell suspension per well) were seeded at a density of 1.0 × 10 5/mL in 96-well plates. Following treatment at the concentration of 10, 20, 40, 80, 160 mg/L Sch B for 24 h, cell viability was estimated by trypan blue exclusion. Six wells were measured for each concentration of test compound. All toxicity experiments were repeated at least three independent occasions.

After exposed to Sch B for 12 h, SMMC-7721 cells (5 × 10 6/sample, both attached and detached cells) were collected and lysed with lysis buffer containing 50 mmoL Tris-HCl buffer (pH 7.5), 20 mmol/L EDTA, and 10 g/L NP-40. Then 10 g/L SDS and RNase (5 μg/mL) were added to the supernatant, and incubated at 56 °C for 2 h, followed by incubation with proteinase K (2.5 μg/mL) at 37 °C for 2 h. After the DNA was precipitated by addition of both ammonium acetate (3.3 mol/L) and ethanol (995 mL/L), it was dissolved in a gel loading buffer. DNA fragmentation was detected by electrophoresis on 15 g/L agarose gels and visualized with ethidium bromide staining.

SMMC-7721 cells were seeded in culture flasks. When the cells were anchored to the plates, various concentrations (0, 10 μmol/L, 20 μmol/L, 40 μmol/L) of Sch B were added and the cells were incubated at 37 °C in humidified atmosphere containing 50 mL/L CO2 for 2 d. Then each group of cells were washed with PBS, trypsinized and fixed with 700 mL/L ethanol at -20 °C for 30 min, and they were stained with 1.0 μg/mL propidium iodide (PI, Boehringer Mannheim, Germany). The red fluorescence of DNA-bound PI in individual cells was measured at 488 nm with an Altra flow cytometer. The results were analyzed using the ExpoII software (Beckman Coulter, USA). Ten thousand events were analyzed for each sample.

The cells were lysed in a lysis buffer (25 mmol/L hepes, 15 g/L Triton X-100, 10 g/L sodium deoxycholate, 1 g/L SDS, 0.5 mol/L NaCl, 5 mmol/L edetic acid, 50 mmol/L NaF, 0.1 mmol/L sodium vanadate, 1 mmol/L phenylmethylsulfonyl fluoride (PMSF) and 0.1 g/L leupeptin, pH7.8) at 4 °C with sonication. The lysates were centrifuged at 15 000 g for 15 min and the concentration of the protein in each lysate was determined with Coomassie brilliant blue G-250. Loading buffer (42 mmol/L Tris-HCl, containing 100 mL/L glycerol, 23 g/L SDS, 50 g/L 2-mercaptoethanol and 0.02 g/L bromophenol blue) was then added to each lysate, which was subsequently boiled for 3 min and then electrophoresed on a SDS-polyacrylamide gel. Proteins were transferred onto a nitrocellulose filter and incubated separately with antibodies against Hsp70, Caspases-3,7,9, then labeled with peroxidase-conjugated secondary antibodies. The reactions were visualized using the enhanced chemiluminescence reagent (Sigma). The results were approved by repeating the reactions twice.

RESULTS
Effect of Sch B on cell proliferation

Treatment of human hepatoma SMMC-7721 cells with Sch B resulted in a dose-dependent cytotoxicity. As shown in Figure 2, Sch B-mediated cytotoxicity occurred at a concentration greater than 20 mg/L for 48 h. A significant decrease in cell number was seen in the cells treated with Sch B at 20 mg/L. The concentration of Sch B leading to a 50% decrease in cell number (LC50) was about 23.5 mg/L. 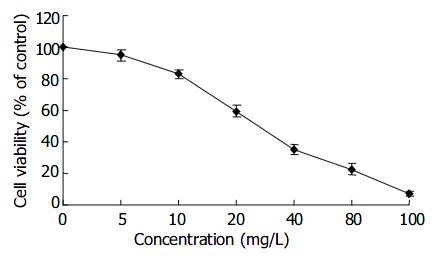 Figure 2 Inhibition rate of Sch B on proliferation of SMMC-7721 cells. Cells were incubated at concentrations of Sch B for 48 h.
Effect of Sch B on primary cells or normal cell line toxicity

As indicated in Figure 3, Sch B had little cytocidal effect on primary human fibroblast cells and human lymphocyte cells even if at the concentration of 160 mg/L. Treatment of human HL-7702, ECV-304 with Sch B resulted in a dose-dependent cytotoxicity. But human hepatic HL-7702 cells were more resistant to the Sch B-mediated cytotoxicity than human endothelial cells, ECV-304 cells and human hepatoma SMMC-7721. 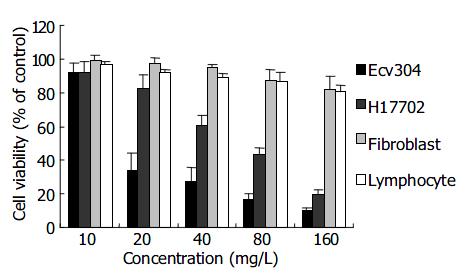 As shown in Figure 4, treatment with Sch B resulted in degradation of chromosomal DNA into small internucleosomal fragments, evidenced by the formation of a 180-200 bp DNA ladder on agarose gels, hallmark of cells undergoing apoptosis. No DNA ladders were detected in the samples isolated from control cultures. These results indicated that Sch B induced an apoptotic cell death in SMMC-7721 cells. 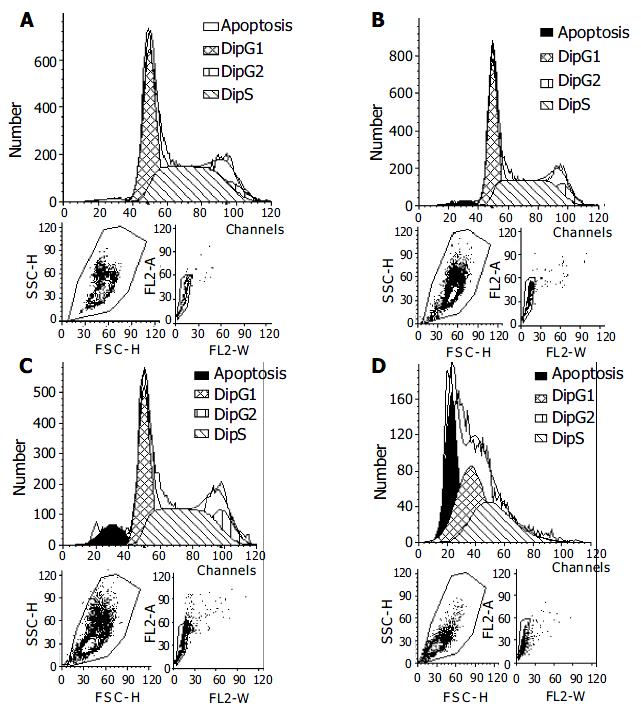 Recent reports suggested that Hsp70 might help to protect cells from apoptosis at an early event in the apoptotic pathway. To elucidate whether Hsp70 was modulated during Sch B induced apoptosis, we examined the expression of Hsp70 by Western blot. Moreover, it was shown that Caspases were the main factor in the apoptotic pathway. We investigated whether Caspases were involved in inducing SMMC-7721 cell apoptosis treated with Sch B. SMMC-7721 cells treated with Sch B for 48 h were analyzed for the enzymatic activity by Western blot. The results showed that Hsp70 was down-regulated and Caspase-3 was activated, while the activity of Caspases-7,-9 had no significant change (Figure 6). 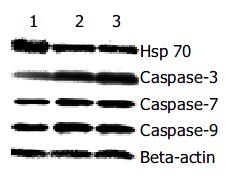 Figure 6 Effect of Sch B on expression of Hsp70, Caspases-3, - 7, -9 proteins. SMMC-7721 cells were treated with Sch B for 48 h. After treatment, cell lysates were extracted, and the level of Hsp70, Caspases-3, -7, -9 proteins were analyzed by Western bolt analysis. Beta-actin was used as an internal loading control. Lane 1: control; Lane 2: 20 mg/L Sch B treatment; lane 3: 40 mg/L Sch B treatment.
DISCUSSION

After human hepatoma SMMC-7721 cells were treated at various concentrations of Sch B for 48 h, MTT colorimetric analysis showed that Sch B could significantly inhibit the proliferation of SMMC-7721 cells, with LC50 value of 23.50 mg/L. While human hepatic HL-7702 cells were more resistant to the Sch B mediated cytotoxic activity than human endothelial ECV-304 cells and human hepatoma SMMC-7721 cells. It is interesting that Sch B had an unconspicuous cytocidal effect on primary human fibroblast cells and human lymphocyte cells.

Current antineoplastic therapies, including chemotherapy and radiation-therapy, are likely to be affected by the apoptotic tendency of cells. During apoptosis, certain characteristic morphologic events, such as nuclear condensation, nuclear fragmentation, and cell shrinkage, and biochemical events, such as DNA fragmentation, would occur[31-35]. In this study, we showed that Sch B induced human hepatoma SMMC-7721 cell apoptosis was confirmed by DNA ladder and cell cycle analyses.

The commitment of cell apoptosis requires the integration of numerous inputs involving multiple signal transduction pathways. Some cellular pathways and molecular regulators/ effectors of apoptosis have been identified. Many lines of evidence demonstrated that activation of Caspases is a central mechanism of apoptosis. So far, more than 15 members of Caspases have been reported in the literature, and most of them played a major role in apoptosis, participating in the initiation and execution of programmed cell death[36,37]. Based on their structure and function, Caspases are classified into two groups: initiator Caspases (such as Caspases-2,-8 and-9) and executor Caspases (such as Caspases-3, -6 and -7)[38,39]. In this study, Sch B-induced apoptosis of SMMC-7721 cells was accompanied with up-regulation of Caspase-3, but did not involve the regulation of Caspase-7 and Caspase-9 protein expression. These results suggested that Caspase-3 but not Caspase-7 was the “executors” of Sch B induced SMMC-7721 cell apoptosis that did not go through Caspase-9-dependent pathway.

Recent results indicated that Hsp70 might help to protect cells from apoptosis. Jaattela et al[40] reported that Hsp70 exerted its anti-apoptotic function on downstream of Caspase-3. Creagh et al[41] revealed that Hsp70 acted on upstream of the Caspases. In the presence of Hsp70, Caspase-3 was not processed or activated and the release of cytochrome C from the mitochondrial intermembrane space, a major Caspase activating mechanism, was inhibited. In this study, the down-modulation of Hsp70 was observed, indicating that Sch B could help Caspase-3 to release from the blockade of Hsp70 so as to promote human hepatoma SMMC-7721 cells to apoptosis.

In conclusion, Sch B is able to inhibit the proliferation of human hepatoma SMMC-7721 cells and induce apoptosis, which goes through Caspase-3-dependent and Caspase-9-independent pathways accompanied with the down-regulation of Hsp70 protein expression at an early event. Further investigation will focus on the identification of other signal modulations in this apoptosis pathway.

The authors are grateful to Professor Shu Zheng for her help in this study.