AIM: Recombined plasmid pETNF-P16 was constructed to investigate its expression properties in esophageal squamous carcinoma cell line EC9706 induced by X-ray irradiation and the feasibility of gene-radiotherapy for esophageal carcinoma.

METHODS: Recombined plasmid pETNF-P16 was constructed and transfected into EC9706 cells with lipofectamine. ELISA, Western blot, and immunocytochemistry were performed to determine the expression properties of pETNF-P16 in EC9706 after transfection induced by X-ray irradiation.

Esophageal carcinoma is one of the most frequent malignant tumors. Its treatment choices include surgical resection, radiation, chemotherapy and biological therapy. However, their limitations and adverse effects influence the therapeutic results. In 1992, Wechselbaum proposed the theory of gene-radiation combination treatment, that is, to ligate the promoter with irradiation-induced function and treatment gene so as to take advantages of the combined therapeutic functions of both modalities[1].

In this study, pETNF-P16 plasmid was constructed and transfected into human esophageal cancer cell line EC9706. The expressions of TNFα and P16 in the transfected cells exposed to different doses of X-ray irradiation and the time course of the expressions after 2Gy X-ray irradiation were detected to explore the feasibility of gene-radiotherapy for esophageal carcinoma.

The expression vector for TNFα and P16 was constructed as Figure 1. 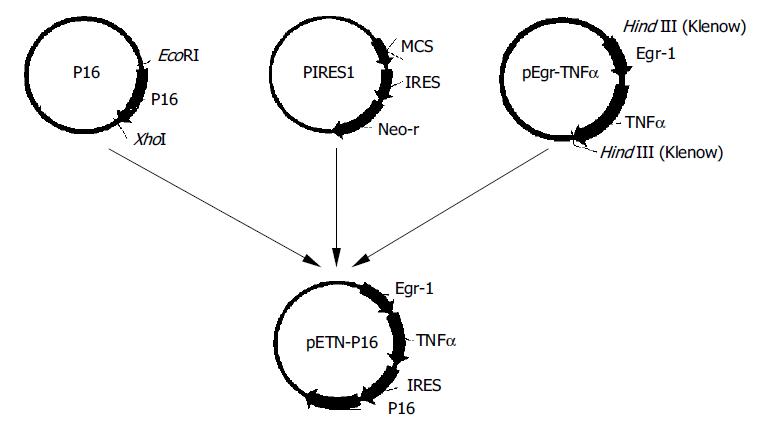 Transfection of EC9706 cells was carried out in a 6-well plate. The transfection procedure began when the cells reached 70% confluence on the surface of plate wells. Solution A was prepared by separate addition of 10 µg of pETNF-P16 or PIRES1 to 100 µL serum-free medium (SFM), and solution B by addition of 10 µL liposome to 100 µL SFM. Solutions A and B were combined at room temperature for 30 min then 0.8 mL SFM was added to the tube containing the above solutions, and then the mixture was added to rinsed cells. The medium was replaced with a fresh and complete medium after 6 h in transfection. The cells were exposed to irradiation after 36 h in transfection.

Student’s t test was used to determine the difference between groups. P values of less than 0.05 were considered statistically significant. 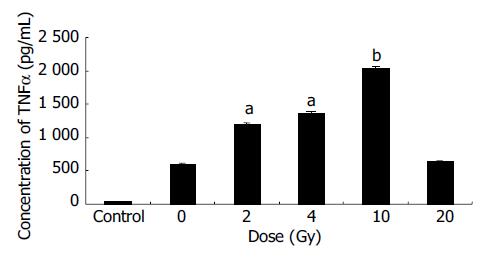 EC9706 cells transfected with pETNF-P16 received 2 Gy of X-ray irradiation while the control group did not receive. Proteins of TNFα and P16 were isolated at different time points after irradiation and detected by ELISA and Western blot. 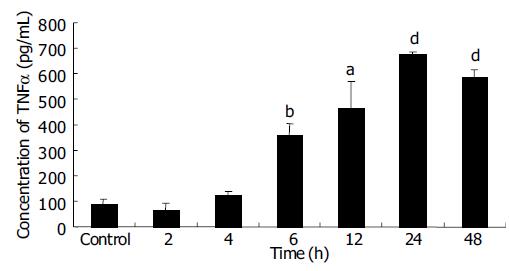 Thirty-six hours after transfected with pETNF-P16 plasmids, EC9706 cells received 2 Gy X-ray irradiation while the control group did not receive. After 24 h, anti-P16 IgG and Biotin-labeled secondary antibody were used to detect the P16 expression in treated cells. P16 protein was positive in the nucleus, cytoplasm and cellular membrane as judged by the brown color.

It was reported that Egr-1 was transcriptionally induced following exposure to irradiation[2]. Sequences responsive to ionizing radiation-induced signals were determined by deletion analysis of the Egr-1 promoter. The results demonstrated that induction of Egr-1 by X-rays was conferred by serum response or CC (A/T) rGG elements. Further analysis confirmed that the region encompassing the three distal or upstream CC(A/T)rGG elements was functional in X-ray response[3-5].

Weichselbaum et al[6] were forerunners in tumor gene-radiotherapy. In 1992 they put forward that ionizing radiation could be used to activate the transcription of exogenous genes encoding cytotoxic proteins, and established the techniques that might be used to target gene therapy during the treatment of human neoplasms.

Combination of gene therapy with radiation therapy could overcome some problems and side effects of either radiation or gene therapy alone, including radioresistance of some tumors and toxicities to normal tissues. Weichselbaum et al[7] linked DNA sequences from the promotor region of Egr-1 to a cDNA sequence that encoded human tumor necrosis factor (TNF) alpha. Egr-TNF construction was transfected into a human cell line of hematopoietic origin, HL525 (clone 2). The latter was injected into human xenografts of the radioresistant human squamous cell carcinoma cell line SQ-20B. Animals treated with radiation and clone 2 demonstrated an improvement compared with those treated with radiation or injections of clone 2 alone. Thereafter, a variety of downstream genes were introduced to Egr-1 promoter to treat different tumors and similar results were obtained[8-10].

TNF has complex in-vivo anti-tumor actions and involves a series of biochemical reactions, and varies according to host metabolism. It could not only kill tumor cells directly, but also act indirectly by occluding the feeding vessels of tumors, promoting inflammation reaction of the host, stimulating cytotoxic activities of megalocytes and producing tumor-specific cytotoxic antibody. Up to now, TNF has been found to have the strongest direct tumor-killing action. However, severe side effects made the effects of systemic treatment unsatisfactory. By contrast, regional administration into the tumor had better therapeutic effects. It has been widely reported that intra-tumor TNF injection had no severe side effects on patients with malignant tumors[11-12]. We constructed pEgr-TNFα plasmid and injected it into mouse melanoma locally to induce its expression by X-ray irradiation. The results showed that pEgr-TNFα gene in combination with radiotherapy could significantly inhibit tumor and had no side effects[13].

P16 is a tumor suppressor gene product. Serrano et al[14] demonstrated that P16 bound to CDK4 and inhibited the catalytic activity of CDK4/cyclin D enzymes. P16 seemed to act in a regulatory feedback circuit with CDK4, D-type cyclins and retinoblastoma protein. Overexpression of P16 gene could block cell cycle progression through the G1-to-S phase boundary in a pRB-dependent manner[15,16]. Many P16 mutants identified from human tumors have been shown to have defects in this activity[17-19]. These suggested that the CDK4-inhibitory activity of p16 was involved in regulating cell cycle progression through the G1/S boundary.

Esophageal carcinoma still has high morbidity and mortality in China[20-22], and its treatment is still difficult[23-30]. Our work might have laid some theoretical basis for further study on esophageal cancer gene-radiotherapy, which should have promising therapeutic potential.

We are very grateful to Professor Ming-Rong Wang, Institute of Cancer, Chinese Academy of Medical Sciences for his kindness in providing us with the EC9706 cell line.