AIM: To develop a tumor DNA vaccine encoding a fusion protein of murine AFP and CTLA4, and to study its ability to induce specific CTL response and its protective effect against AFP-producing tumor.

METHODS: Murine α-fetoprotein (mAFP) gene was cloned from total RNA of Hepa1-6 cells by RT-PCR. A DNA vaccine was constructed by fusion murine α-fetoprotein gene and extramembrane domain of murine CTLA4 gene. The DNA vaccine was identified by restriction enzyme analysis, sequencing and expression. EL-4 (mAFP) was developed by stable transfection of EL-4 cells with pmAFP. The frequency of cells producing IFN-γ in splenocytes harvested from the immunized mice was measured by ELISPOT. Mice immunized with DNA vaccine were inoculated with EL-4 (mAFP) cells in back to observe the protective effect of immunization on tumor. On the other hand, blood samples were collected from the immunized mice to check the functions of liver and kidney.

CONCLUSION: AFP-CTLA4 DNA vaccine can stimulate potent specific CTL responses and has distinctive antitumor effect on AFP-producing tumor. The vaccine has no impact on the function of mouse liver and kidney.

Hepatocellular carcinoma (HCC) is a major cause of cancer death with more than 1.2 million global annual incidences. The incidence of HCC has been increasing rapidly in both Asian and Western countries because of the global pandemic of hepatitis B and C infections[1]. Surgery and liver transplantation are the only effective treatments, but most HCC patients are not eligible due to the advanced stage of disease or poor hepatic function concomitant with cirrhosis[2-8]. It is important to develop novel therapies for HCC, and some genes and immunotherapeutic strategies for HCC are under investigation.

Understanding of antigen processing and presentation by antigen-presenting cells, as well as the conditions of induction of T-cell immunity, has spawned the discipline of genetic immunotherapy. DNA-based immunization can induce strong cellular immune responses to a variety of antigens, including tumor antigens, such as antigens associated with malignant melanoma[9-11], ovarian carcinoma[12], breast cancer[13,14], small-cell lung cancer[15], neuroblastoma[16] and prostate carcinoma[17].

Recent studies on the immunodominant epitopes of AFP have provided a solution to the obstacle of HCC immunotherapy. The majority of human HCCs overexpress the oncofetal antigen AFP, Mr 70 000 glycoprotein. AFP is produced at fetal liver at high levels, and transcriptionally repressed at birth and is present thereafter at low serum levels throughout life[18]. Butterfield et al[19-21] found recently that 4 peptides of human AFP processed and presented in the context of HLA-A0201, could be recognized by the human T cell repertoire, and could be used to generate AFP-specific CTL in human T cell cultures and HLA-A0201/Kb-trangenic mice. It was also found that the murine immune system could generate T-cell responses to this oncofetal antigen[22-24]. AFP can serve as an effective tumor-specific antigen but its immunogenicity is weak[19-25].

Cytotoxic T-lymphocyte antigen 4 (CTLA4) is a glycoprotein expressed on activated T cells. It has a strong binding affinity to both B7-1 (CD80) and B7-2 (CD86) molecules[26], which are primarily expressed on APCs. CTLA4 is a homodimer, but dimerization of CTLA4 is not required for B7 binding[27]. CTLA4-Ig has been used as an immunosuppressive drug in animal models of transplantation and autoimmune diseases[28,29].

In the present study, we investigated whether the immunogenicity of mouse AFP could be improved by targeting to APCs through B7-1 and B7-2 molecules. We constructed a plasmid DNA encoding mAFP and the extramembrane domain of mouse CTLA4 and found this DNA vaccine could stimulate potent specific CTL responses and had distinctive antitumor effect on AFP-producing tumor.

The 1.8 kb mAFP cDNA was cloned from total RNA of Hepa1-6 cells by RT-PCR. Total RNA was isolated from Hepa1-6 cells by the TRIzol method. RT-PCR primers were designed to include the entire mAFP coding region, including the signal sequence. The primers used were 5’-CTCAGGAATTCGCC ATGAAGTGGATCACA-3’ and 5’-CTCTGCTCTAGATT ACTCGAGAACGCCCAAAGCATCACG-3’. The 1.8 kb mAFP cDNA PCR product was cloned into pcDNA3.1/myc-His to construct the plasmid pmAFP. The plasmid pmCTLA4-Ig was used as a temple to get the extramembrane domain of CTLA4 through PCR. To construct the mAFP-mCTLA4 fusion protein expression vector, we used overlap PCR to add a GGGGSGGGGS peptide linker upstream of the extramembrane domain of mouse CTLA4 gene. The forward primer 5’-TATGGCGGGGGCTCGATGGAAGCCATAC AGGTG-3’ and the reverse primer 5’-CTCTCTCTCTAGATC AAGAATCCGGGCATGGT-3’ were used in the first round PCR on the mouse CTLA4-Ig gene. The PCR product was used as a template to perform a second round PCR using the same reverse primer and a second forward primer 5’-TTATATTCTC GAGGGAGGCGGGGGCTCGGGAGGCGGGGGCTCGATGG-3’. The 5’ side of the first forward primer and the 3’ side of the second forward primer were overlapped for 17 nucleotides. The N terminal of extramembrane domain of CTLA4 with linker was fused in frame with the C terminal of mAFP in pmAFP to construct the mAFP-mCTLA4 fusion protein expression plasmid pmAFP-CTLA4. The recombinant vector was identified by restriction enzyme analysis and sequencing.

Lipofectamine 2000 was used for transient transfection of CHO cells according to the manufacturer’s instructions. Proteins were separated on SDS-PAGE, and transferred onto a nitrocellulose membrane by semidry electrobloting. Proteins were stained with goat anti-AFP polyclonal antibody or biotinylated rabbit anti-CTLA4 polyclonal antibody, followed by anti-goat IgG-HRP or HRP-avidin. The blot was developed with ECL Western blotting detection reagents.

EL-4 (mAFP) was developed by stable transfection of EL-4 cells with pmAFP by Lipofectamine 2000 according to the manufacturer’s instructions. Transfectants were selected and maintained with G418 (0.3 mg/ml) in RPMI1640 complete media. The expression of mAFP mRNA in EL-4(mAFP) was assessed by RT-PCR.

Twenty-four female C57BL/6 mice were divided into pmAFP-CTLA4 group, pmAFP group, pcDNA3.1 group and PBS group, each group had 6 mice. For each mouse, 100 µg plasmid was administered in the left anterior tibialis muscle on day 0 and day 14, respectively. On day 28 of study, all mice were killed. The splenic lymphocytes were separated for ELISPOT and the blood was drawn for examination of the functions of liver and kidney. The splenocytes were restimulated in vitro by EL-4(mAFP) as reported[22]. In brief, splenocytes were cultured with irradiated EL-4 (mAFP) cells containing 10 unit/ml human IL-2 for 48 h at 37 °C. The anti-IFN-γ antibody coated ELISPOT plate was incubated with restimulated cells at 37 °C for 24 h.

Another 24 C57BL female mice were grouped and immunized as above. Two weeks after the last immunization, all mice were injected by 2×105 EL-4 (mAFP) on the back subcutaneously. Tumor mass was assessed two times weekly as the follow formula: 4/3πr3(r = radius).

Examination of functions of liver and kidney

Software SPSS 10.0 was employed to process the data. The t test was used for statistical analysis. P < 0.05 was considered significant.

The 1.8 kb mAFP cDNA was isolated from murine HCC cell line Hepa1-6 by RT-PCR and subcloned into pcDNA3.1 to construct plasmid pmAFP. We cloned the extracellular domain of mouse CTLA4 from plasmid pmCTLA4-Ig, and added a flexible linker (GGGGSGGGGS) before CTLA4 by overlap PCR. The N terminal of extramembrane domain of CTLA4 with linker was fused in frame with the C terminal of mAFP in pmAFP to construct the mAFP-mCTLA4 fusion protein expression plasmid pmAFP-CTLA4. Correct orientation of the ligations was determined by restriction enzyme analysis (Figure 1). Sequencing analysis showed that the reading frame was correct.

Expression of plasmids pmAFP and pmAFP-CTLA4 in transient transfection of CHO cells was analyzed with Western blotting, the expected two protein bands (-70 and -84 kDa) were shown (Figure 2). The expression of mAFP mRNA in EL-4(mAFP) was confirmed by RT-PCR(data not shown). 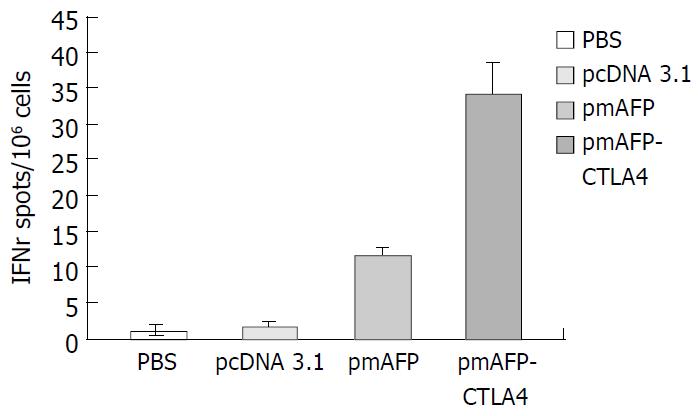 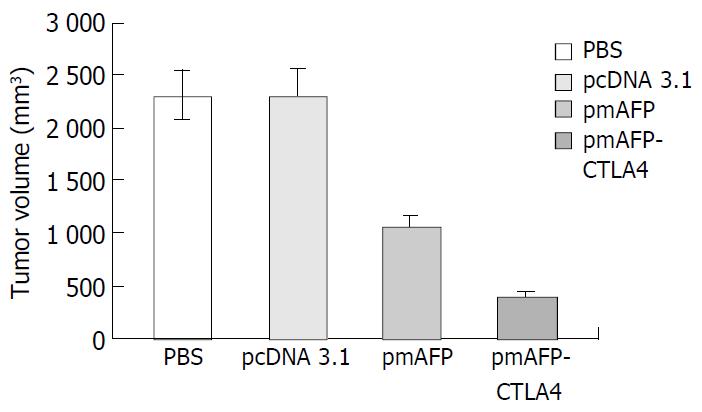 The serum level of ALT and creatinine in each group was unchanged (Table 1), suggesting that the immunization had no impact on the function of liver and kidney.

Many tumors express tumor-associated or tumor-specific antigens but do not elicit an efficient immune response. Various experimental strategies have been explored to enhance the immunogenicity of tumor vaccines. Targeting immunogens to APCs with Abs against class MHC[30,31], FcγR[30], 33D1[31], or surface Ig[32] could substantially increase Ab responses. Antigens could be presented to APCs more efficiently by conjugating with FcγR[33], IP10[34], MCP-3[34], L-selectin[35] and CTLA4[35,36], and lead to significant antitumor immunity[34,36]. A DNA vaccine that can express carcinoembryonic Ag (CEA), AFP, and CD40 ligand trimer fusion protein, could break peripheral T cell tolerance against CEA and achieve effective tumor-protective immunity against murine colon carcinoma in CEA-transgenic mice[37].

HCC is a highly malignant tumor with a poor prognosis and few therapeutic options. AFP is a HCC-associated Ag but can not elicit efficient immune response. Some experimental strategies have been explored to enhance the immunogenicity of HCC vaccines based on AFP. Previous experiments of AFP-specific genetic immunotherapy for HCC included AFP plasmid immunization, AFP-transduced DCs immunization and AFP plasmid prime-AFP adenovirus boost immunization. Plasmid AFP immunization resulted in detectable but low levels of AFP-specific T-cell responses and poorly reproducible protective immunity[22-25]. DCs engineered to express murine AFP demonstrated a powerful ability to generate AFP-specific T-cell responses and protective immunity in mice[22,23]. However, the need for costly cell culture procedures precluded their wide availability for clinical use, and minor variation in the culture technique or antigen loading might yield sub optimal, even tolerating vaccines[38,39]. AFP plasmid prime-AFP adenovirus boost immunization could generate significant AFP-specific T-cell responses and protective immunity in mice[23]. But this method at least has two steps. In the present study, we tested a novel strategy for inducing anti-HCC immunity by specifically targeting APCs with a DNA vaccine encoding both AFP and CTLA4 in mice. We found that the vaccine elicited strong AFP-specific T-cell responses and had distinctive preventive effect on AFP-producing tumor.

We attributed the successful α-fetoprotein specific T cell responses in mice to the CTLA4 moiety targets APCs for efficient receptor-mediated uptake and processing of mAFP. CTLA4 could likely provide such a strong adjuvant activity due to its strong binding affinity to B7 molecules on APCs. CTLA4 could bind to both B7-1 and B7-2 with a 20- to 50-fold higher affinity than CD28[40]. A CTLA4-Ig fusion protein composed of CTLA4 and IgG Fc was 4-fold high of that in draining lymph nodes, levels of nontargeted protein within 2-24 hours administration[41]. Monomeric CTLA4 also has binding activity for B7-1 and B7-2, though its binding activity is low when compared with dimeric CTLA4.

CTLA4-Ig has been used as an immunosuppressive drug in animal models of transplantation and autoimmune diseases[28,29]. Our current study showed the enhanced immunogenicity of mAFP-CTLA4. CTLA4 had 20 to 50-fold higher affinity to both B7-1 and B7-2 than CD28. The immune suppression mediated by CTLA4-Ig was likely through its inhibition of CD28-B7 interactions, which provide an important positive signal for T-cell proliferation and cytokine release[42]. The different immunomodulating effects of CTLA4 might be caused by varied doses of CTLA4 administered. In previous studies, to achieve maximal immune suppression, 50-500 µg CTLA4-Ig was applied before and after transplantation for several consecutive days. But when fusion protein Id-CTLA4 was used as vaccine in another experiment, only twice administration of 0.1-50 µg Id-CTLA4 was sufficient enough to elicit strong immune response to Id[36]. Vaccination with DNA encoding CTLA4-Ig provided an additional evidence that CTLA4-Ig at low levels could increase both Ab and T-cell proliferation responses[35,43].

In summary, the result suggests that a DNA vaccine encoding AFP and CTLA4 can elicit strong AFP-specific T-cell responses and has distinctive antitumor effect on AFP-producing tumor.