METHODS: Based on the Adeno-XTM expression system, the human immediate early cytomegalovirus promoter (PCMV IE) was removed from the plasmid, pshuttle, and replaced by a 0.3 kb α-fetoprotein (AFP) promoter that was synthesized by polymerase chain reaction (PCR). The enhanced green fluorescent protein (EGFP) gene was inserted into the multi-clone site (MCS), and then the recombinant adenovirus vector carrying the 0.3 kb AFP promoter and EGFP gene was constructed. Cells of a normal liver cell line (LO2), a hepatocarcinoma cell line (HepG2) and a cervical cancer cell line (HeLa) were transfected with the adenovirus. Northern blot and fluorescence microscopy were used to detect the expression of the EGFP gene at mRNA or protein level in three different cell lines.

RESULTS: The 0.3 kb AFP promoter was synthesized through PCR from the human genome. The AFP promoter and EGFP gene were directly inserted into the plasmid pshuttle as confirmed by restriction digestion and DNA sequencing. Northern blot showed that EGFP gene was markedly transcribed in HepG2 cells, but only slightly in LO2 and HeLa cells. In addition, strong green fluorescence was observed in HepG2 cells under a fluorescence microscopy, but fluorescence was very weak LO2 and HeLa cells.

CONCLUSION: Under control of the 0.3 kb human AFP promoter, the recombinant adenovirus vector carrying EGFP gene can be specially expressed in AFP-producing HepG2 cells. Therefore, this adenovirus system can be used as a novel, potent and specific tool for gene-targeting therapy for the AFP positive primary hepatocellular carcinoma.

In recent years, research in tumor gene therapy has made great progress in laboratory, However, there is an urgent need for gene therapy in clinical practice. Recombinant adenovirus is one of the most popular and promising tools for gene therapy[1,2]. But how to construct a proper recombinant adenovirus vector carrying the interested gene that is specifically expressed only in target tumor cells has become the bottle neck which restricts the application of the vector in clinical gene therapy for tumors[3,4]. The aim of this study was to construct a recombinant adenovirus vector carrying a 0.3 kb AFP promoter, and to investigate the expression of enhanced green fluorescent protein (EGFP) gene that was inserted into the vector in AFP positive hepatocarcinoma cells.

Hepatocarcinoma cell line, HepG2, was a gift from Professor Wei-Xue Tang, Department of Pathophysiology, Chongqing University of Medical Sciences. A normal hepatocyte cell line, LO2, and human cervical cancer cell line, HeLa, were preserved in our laboratory. Low-passage HEK 293 cells were obtained from the Institute for Cytobiology, Chinese Academy of Sciences, Shanghai. All cells were cultured in RPMI-1640 medium containing 10% fetal calf serum at 37 °C in saturated humidified air with 5% CO2. The cells were subcultured once every three days.

Construction of the adenoviral vector

pshuttle and the PCR products of 99-744 region were both doubly digested with MluI and NheI, and the digested products were ligated with T4 ligase. MluI site was 256, and the NheI was 921 in pshuttle. The 256-921 region of the pshuttle was removed from the plasmid, and replaced by the region of 256-744, then the 744-921 region containing the pCMV IE was removed from pshuttle. Thus, a new plasmid pCMV(-) was constructed.

Subsequently, the pCMV(-) and AFP PCR products were doubly digested with NheI and ApaI. The 0.3 kb AFP promoter was inserted into the pCMV(-), which was called pAFP. Then the pCMV IE was replaced by the AFP promoter.

To insert the EGFP gene into the pAFP, both the pAFP and EGFP PCR products were doubly digested with ApaI and AflII. The digested products were Ligated to construct pAFP-EGFP.

The newly constructed plasmid pAFP-EGFP was then doubly digested with PI-Sce/I-Ceu I (New England Biolabs. UK), and the purified product was ligated with Adeno-X genome DNA. It was amplified in E.coli DH5α. The HEK293 cells were transfected with recombinant adenovirus which was linearized with PacI, as described in the manual. In brief, the HEK293 cells were cultured in a 60 mm plate, and 10 µl Pac I-digested Adeno-X DNA was added in the culture medium when the cells were 50%-70% confluent, then the cells were transfected with Lipofectamin and incubated for another week. For virus collection, the cells were lysed with three consecutive freeze-thaw cycles, and the virus was collected from supernatant. The titer of the virus was about 1×107 pfu/ml, which was determined with end-point dilution assay.

HepG2, LO2 and HeLa cells were cultured in 6-well plates, and the medium was removed after 24 h, followed by addition of adenovirus at multiplicity of infection (M.O.I) of 100 plaque-forming units (pfu)/cell, and fresh culture medium was added 4 h later. After 48 h of normal culture, total RNA was extracted from the cells for Northern blot. In brief, 10 µg total RNA of each sample was added to 10 g·L-1 formaldehyde denatured agarose gel, and electrophoresis was performed. mRNA was transferred onto the nitrocellular (NC) membranes by capillary blot, and exposed to 254 nm ultraviolet for 1 min (600×100 µJ·cm-1) to fix mRNA. The NC membranes were pre-hybridized for 3 h at 42 °C. The cDNA probes were labeled by a random primer method. The probes were added and hybridized at 42 °C for 20 h. Then the membranes were washed, dried and used for X-ray film autoradiography at -70 °C in a black box for 48 h. The relative amount of EGFP cDNA was semi-quantified from relative optical density of the band, using a Bio-image analysis system (Bio-Rad Doc Gel 2000, USA).

The cells were cultured and transfected with the recombinant adenovirus as described above. Fluorescent images were captured at 490 nm using a Nikon Eclipse E1000 microscope.

Electrophoretic results of PCR product of the human 0.3 kb AFP promoter are shown in Figure 1. The sequence of the promoter was described as below: 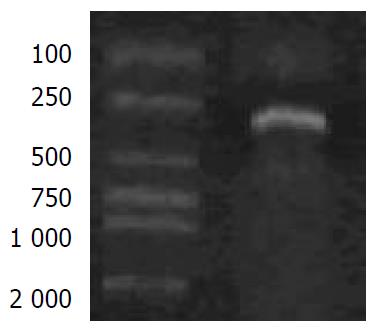 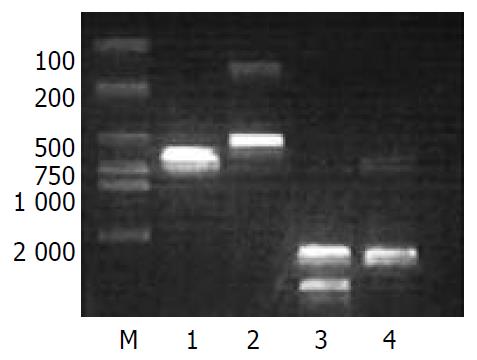 As shown in Figure 3, strong expression of EGFP mRNA was observed in HepG2 cells but was weak in AFP negative LO2 and HeLa cells, only 38% and 17% of that in HepG2 cells, respectively. 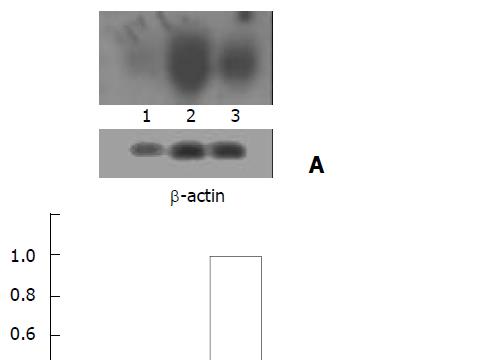 Under fluorescence microscopy, green fluorescence indicating expression of EGFP was strong in HepG2 cells (Figure 4A) but very weak in LO2 (Figure 4B) and invisible in HeLa cells. 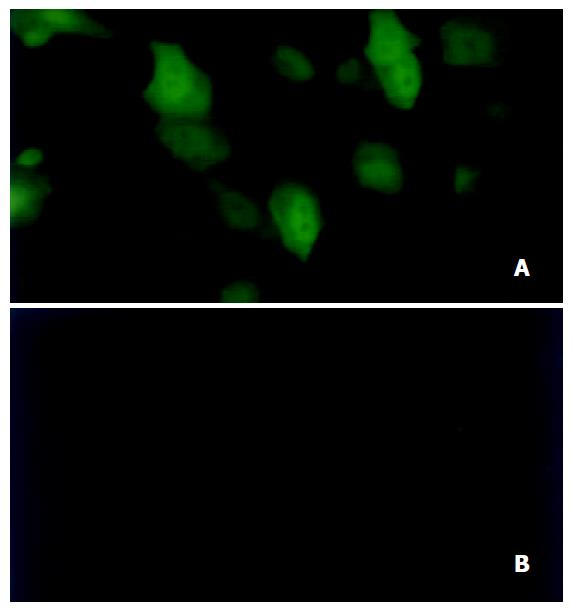 Hepatocellular carcinoma (HCC) is one of the most common malignancies worldwide. All the treatment strategies used today had a poor outcome[5-7]. Gene therapy might be a promising way[8,9]. Gene transfer into specific tissues or cell types is a key technique in the development of gene therapy. A tissue-specific promoter has been found to be potentially valuable for the study of specific gene function and for gene therapy[10-14], as it permited a linked cytotoxic or any other gene to be expressed specifically in target cells[15-17]. The AFP could be re-expressed in the majority of hepatocellular carcinomas[18,19], and thus utility of the AFP promoter for gene therapy against HCC might be a rational approach[20-22].

Adenoviral gene transfer is one of the most reliable methods for introducing genes into almost all types of mammalian cells and for expressing the genes at high levels since many cells receive multiple copies of the recombinant genome. Gene therapy using replication-competent adenovirus that selectively propagates in tumor cells might be an effective treatment for cancer[23,24]. We developed an adenovirus carrying an AFP promoter, thus the replication of the target gene was restricted specifically in AFP-producing HCC[25]. The full length AFP promoter was 5.1 kb[26,27], previous studies have shown that the 0.3 kb of the AFP promoter had an enough activity to stimulate AFP transcription containing a glucocorticoid response element and two binding sites of hepatocyte nuclear factor (HNF)-1, a hepatocyte-specific transcriptional factor, and a TATA box, but no typical CCAAT sequence[28,29].

In this study, primers containing specific enzyme-cutting sites were designed to amplify the 0.3 kb AFP promoter from human genome, and the 0.3 kb sequence was cloned into the plasmid pshuttle to replace the primary CMV promoter. EGFP gene as a target gene was inserted into the downstream of AFP promoter. Then AFP expressing hepatocarcinoma cells (HepG2), AFP negative normal hepatocytes (LO2) and HeLa cells were transfected with the recombinant adenovirus. Northern blot showed that EGFP gene was dramatically transcribed in HepG2 cells, however, in LO2 and HeLa cells, the transcription was very weak. Under fluorescent microscopy, green fluorescence was strong in HepG2 cells, but very weak in the other two cell lines. Therefore, this recombinant adenovirus carrying the 0.3 kb AFP promoter can be used as a proper vector to express the interested gene in AFP expressing hepatocarcinoma cells or tissues.

It has been reported that the promoter activity of 0.3 kb AFP promoter was limited for transcription of downstream genes[30,31]. For this reason, several enhancers have been inserted into the upstream of the promoter in order to upgrade its activity[32-35]. In our study, the original enhancer in pshuttle was reserved, which might contribute to the satisfactory transcription of the downstream gene using the 0.3 kb promoter.