AIM: To inquire into the effects and mechanism of Zuogui Wan (Pills for Kidney Yin) on neurocyte apoptosis in nuclei of arcuate hypothalamus (ARN) of monosodium glutamate (MSG)-liver regeneration rats, and the mechanism of liver regeneration by using optic microscope, electron microscope and in situ end labeling technology to adjust nerve-endocrine-immunity network.

Wistar rats were divided into two groups: Treatment group which was given monosodium glutamate dissolved in saline solution, the other group which served as control was given the vehicle only. MSG 4 mg/g.b.mb was injected on d 2, 4, 6, 8, and 10 after birth. On the 28th d, pups were weaned and caged in 8 groups (4 groups were male rats, 4 groups were female rats). The rats were maintained in an air-conditioned (temperature 24 ± 1 °C) animal room with controlled lighting (12 h light, 12 h dark). They were provided with commercial diet and water. From the 6 th week to the experiment end, treatment group rats were treated by gastrogavage of Zuogui Wan (Radix Rehmanniae Praeparata, Rhizoma Dioscoreae, Fructus Lycii, Fructus Corni, Semen Cuscutae, Radix Cyathulae, Colla Cornus Cervi, and Colla Plastri Testudinis) 5 g/kg[1]. In the 8 wk, partial hepatectomy was performed by excision of the median and left hepatic lobes (occupying about 68% of whole liver) according to the method of Higgins and Anderson under pentobarbital anesthesia[1]. Shamly-operated rats (MSG-rats) were anesthetized, and their livers were exposed but not removed. All operations above were clean operations. Rats were operated and killed between 8 and 12 h a.m. to avoid the effects of diurnal variation. Rats subjected to partial hepatectomy were killed on the 1st, 3rd, 5th, 11th d after operation, and 6 were taken randomly in each group per batch (3 males and 3 females).

Using in situ end labeling (ISEL) method, the nuclei of positively apoptotic neurocytes were stained into blue purple, the starches of cells were intact. Each slice was randomly taken under five fields of vision, the positively stained area was surveyed, and the positive cell number was calculated on the unit area. Then five fields of vision were averaged to calculate the proportion of positive cells in the slice. The percentage of positive cells (apoptosis index, AI) was used to show the apoptosis degree in the tissue.

Under light microscope, the neurocytes in arcuatus hypothalami (ARN) of MSG-liver regeneration rats reduced significantly and astrocytes increased significantly. Under electron microscope, neurocyte nucleus chromatin collected at the edge was stained deeply, and nuclear membrane was not regular, cytoplasm was concentrated. Neurocyte nucleus shape factor (approach 1 was regular, and > 1 was not regular), circularity (approach 1 was round, and < 1 was not round) and heteromorphic index (approach 3 was low for the heterotype degree, > 3 was high for the heterotype degree) had significant differences (P < 0.05). Pathological changes in Zuogui Wan treatment group were distinguished (Table 1, Figure 1). 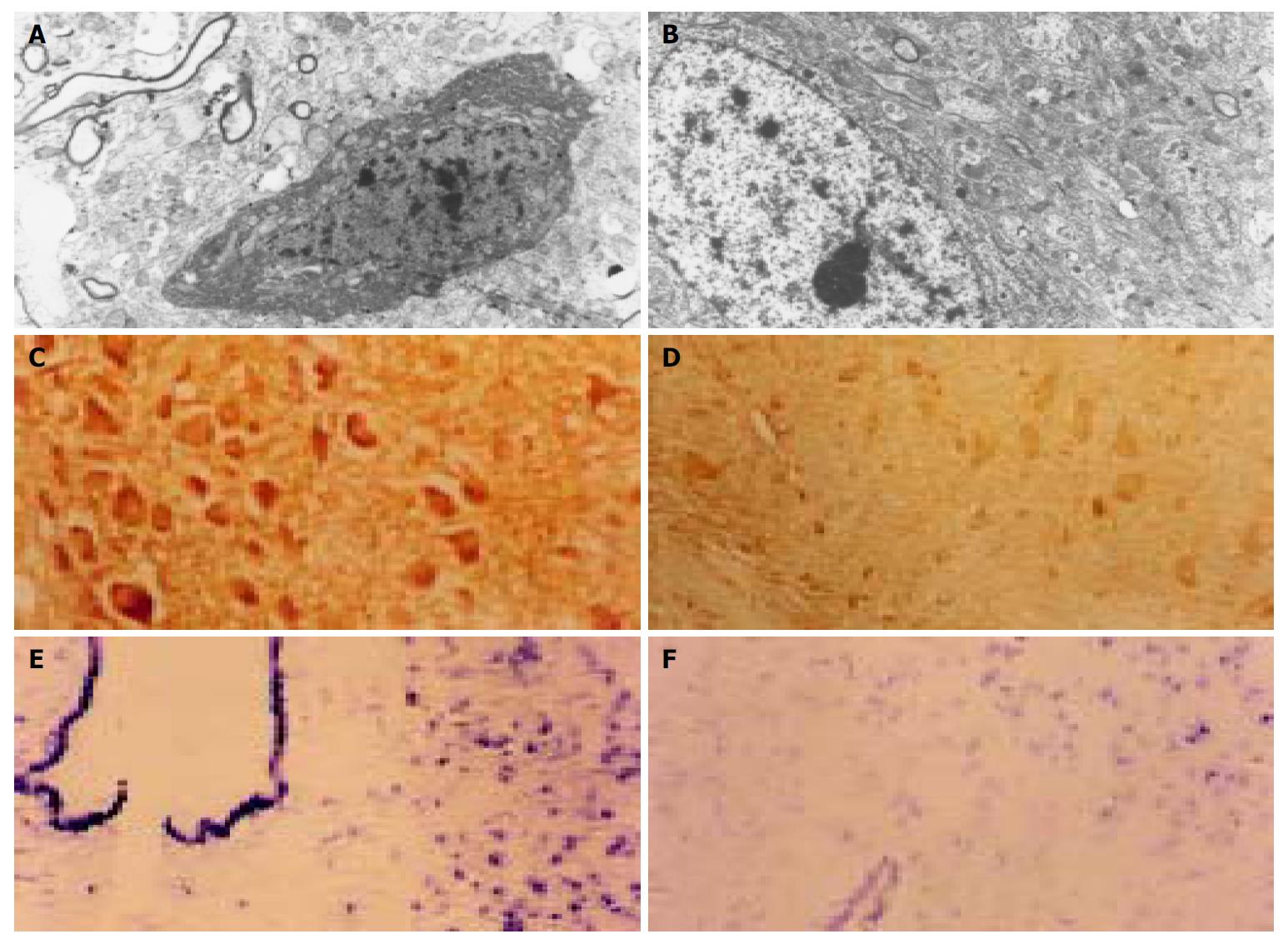 Apoptosis index (AI) of MSG-liver regeneration rats in ARN was higher than that of saline treated and shamly-operated MSG-rats, and the difference was significant (P < 0.01 or P < 0.05). AI of Zuogui Wan treated group reduced significantly on the postoperative 5th and 11th days compared to model group (P < 0.01) (Table 2).

Some studies found that neonate rats who were given high dose MSG on the 2nd, 4th, 6th, 8th, 10th days could destroy nucleus arcuatus hypothalami (ARN) selectively, and swelling and necrosis in ARN neurocytes were the main pathological lesions, and its mechanism in nervous poison might be concerned with the overexertion of calcium ions in cerebral neurocytes[6-11]. Our experiment results showed that MSG could induce neurocyte apoptosis in the intermediate and advanced stage after rats were injected with MSG, leading to acute swelling and necrosis in ARN neurocytes. We also could find apoptosis in cerebral neurocytes under electron microscopy and the number of apoptotic cells in model group is larger than that in control group, 8-10 wk after hypodermical injection of MSG. Furthermore, the shape factor, circularity and heteromorpic index that reflected the changes of neurocyte nuclei in ARN were different compared with saline control group. Quantitating apoptotic neurocytes in cerebra by in situ end-labeling technique also showed that cerebral IA was larger than that of control group. In ordinary physiological state, most neurons can survive all the life and do not renew, therefore, apoptosis can seldom be found. As a common secondary messenger of apoptosis, MSG could lead to overexertion of calcium ions in neuron cytoplasm, which may be one of the mechanisms underlying apoptosis in MSG-rats’ and MSG-liver regeneration-rats’ cerebral neurocytes. But the phenomenon that cerebral neurocyte apoptosis of MSG-liver regeneration rats was more conspicuous than that of MSG-rat group can not be explained completely with the mechanism, i.e. MSG leading to overexertion of calcium ions in neuron cytoplasm could induce neurocyte apoptosis. These studies showed that it probably involved other factors leading to cerebral neurocyte apoptosis, besides overexertion of calcium ions in neuron cytoplasm induced by MSG[4].

One of the major research achievements of the kidney’s essence is deficiency of kidney-yang in hypothalamus, and deficiency of kidney-yang is closely correlated with functional disorder in nerve-endocrine-immune network[23-30]. Our results showed that deficiency of kidney-yin was located in hypothalamus also[2-5,27], and neurocyte apoptosis in ARN of MSG-liver regeneration rats significantly lessened and indexes such as shape factor, circularity, heteromorphism which reflect the changes of ARN neurocyte nuclei improved significantly by replenishing kidney-yin with Zuogui Wan. Meanwhile, its expression of TGF-β1 was also less than that in model group.