CONCLUSION: p53 codon 72 Arg homozygous genotype is one of the high-risk genetic factors for HPV-associated SCC of Kazakh. Individuals carrying Arg allele compared to those with Pro allele have an increased risk for esophageal SCC.

Esophageal cancer is common in several areas of central Asia, including Xinjiang Uygur Autonomous Region,China. The incidence of Kazakh’s EC is the highest among population in Xinjiang and its age-adjusted mortality rate up to 91/100000 has been reported in Kazakh’s population[1]. The population size of Kazakh was estimated to be 13 million around the world and 10 million Kazakh distributed in Kazakhstan and 2 million in Xinjiang, China. The population in the present study was a Kazakh isolated community located at the Northeast of Xinjiang. The genetic homogeneity and geography stability of the population, along with shared exposure to common environmental variables, provide an excellent opportunity for the study of genetic influence on EC. These cancers are mostly SCC , and show a high frequency of mutation in the p53 tumor suppressor[2]. Epidemiological studies have suggested that a number of risk factors are involved in the carcinogenesis of Kazakh’s SCC, including deficiencies in vitamins and minerals, consumption of pickled foods and environmental exposure to specific nitrosamines, etc[3,4]. Viral infections, in particular HPV infection, have been reported in esophageal cancers from China, and HPV DNA has been detected in 0%-60.0% of cancer tissues by polymerase chain reaction analysis[5,6]. HPV is implicated in the pathogenesis of squamous cell carcinoma of the cervix and esophagus. HPV-16 encodes E6 protein, which binds to cellular tumor-suppresser protein p53 and directs degradation through the ubiquitin pathway[7]. This event is mediated by another cellular protein termed E6-AP, a component of the ubiquitin pathway[8,9]. The arginine allele at codon 72 of p53 was found to be more susceptible to degradation by HPV E6 protein than the proline allele in vivo, thus resulting in a high frequency of esophageal SCC in individuals homozygous for arginine at the codon[8]. On the basis of these experiments, it has been widely assumed that p53 is functionally inactivated by the viral E6 protein in HPV-associated cancer cells and that infection with high-risk HPV types leads to the same phenotype as a loss of p53 function because of p53 gene mutations or direct degradation[9].The association of p53 codon 72 polymorphism with HPV-16-associated esophagus SCC risk has been studied by several groups but with inconsistent results. Kawaguchi et al[10] reported that the form of p53 protein carrying an Arg residue at this position in HPV-16/18 positive samples was found to be significantly more susceptible to degradation by E6 protein than that in HPV-16/18 negative samples. There are controversial results from several clinical studies of esophagus SCC[11,12]. A part of Kazakh’s esophageal SCC correlated with the presence of HPV-16/18[13]. To our knowledge, p53 polymorphism in Kazakh’s esophageal SCC has apparently not been documented. In this study, we investigated the genotypic frequency of p53 codon 72 polymorphism and HPV-16 E6 in Kazakh’s esophageal SCC patients in Xinjiang, China. The data we obtained seemed to be the first regarding the association of this polymorphism with HPV-associated risk for cancer of the esophagus.

Pairs of primary Kazakh’s esophageal SCC tissue and corresponding normal mucosa were obtained from 63 patients who underwent surgery in the Department of Surgery, 1st Teaching Hospital of Xinjiang Medical University, from 1999 to 2003, and from 41 patients who underwent surgery in Department of Surgery, the People’s Hospital of Xinjiang Uygur Autonomous Region, China, between 1998 and 2000. No patient had been given treatment prior to the study. In all cases the histopathological type of tumors was squamous cell carcinoma. Cancer tissues and well-separated normal esophageal mucosae obtained from surgically resected esophageal SCC patients were fixed in 40 g/L formaldehyde and embedded in paraffin. Genomic DNA was prepared by proteinase K digestion and phenol/ chloroform extraction, followed by ethanol precipitation, as described by Greer et al[14].

p53 exon 4 (codons 33-125) containing codon 72 was amplified by PCR using oligodeoxynucleotide primers 5’-TGAGGACC TGGTCC TCTGAC-3’ (forward) and 5’-AGAGGAATCCCAAA GTTCCA-3’ (reverse), under the following conditions: denaturation at 94 °C for 30 s, primary annealing at 54 °C for 30 s, and extension at 72 °C for 30 s for 35 cycles. PCR products (412 bp) were digested overnight at 37 °C with Acc II, which was cut within the sequence corresponding to the Arg codon (CGC) at position 72 to generate two fragments of 252 bp and 160 bp[15]. The DNA fragments were then resolved by electrophoresis on 30 g/L agarose gels stained with ethidium bromide. Presence of uncut (412 bp) DNA was indicative of the Pro allele and heterozygous for Arg/Pro genotypes showed three fragments of 412, 252 and 160 bp.

Chi-square test was used to examine the correlation between the p53 codon 72 polymorphism of the esophageal SCC patients and the presence of HPV-16E6 by SPSS software(12.0).

Pairs of 104 DNA sample from primary Kazakh’s esophageal SCC tissues and corresponding normal mucosae were analyzed for the presence of oncogenic HPV-16-E6 using PCR methods (Figure 1). The frequency of HPV-16-E6 gene in cancer cases (52.9%) was higher than that in corresponding normal mucosae (39.4%) (Table 1, Table 2). These results were similar to previous reports[16]. 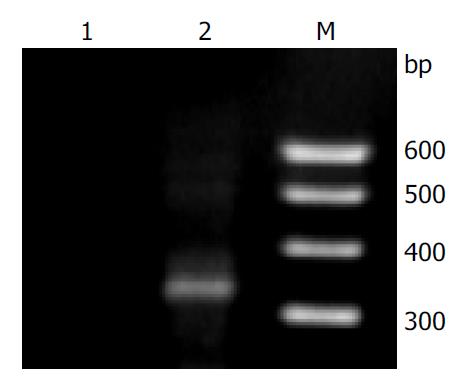 PCR-RFLP was carried out on 104 DNA samples from primary Kazakh’s esophageal SCC tissues and corresponding normal mucosae to analyze the association between the p53 codon 72 polymorphism and HPV-associated esophageal SCC by DC-2000 image system (Figure 2). It showed a typical pattern of codon 72 evaluated by restriction analysis. Presence of the Pro allele resulted in resistance of the PCR amplified DNA fragment to digestion by Acc II. The comparision between the distribution of p53 alleles at codon 72 in HPV-positive esophageal SCC with the HPV-negative group is shown in Table 1. The frequency of presence of Arg allele alone from the Kazakh’s esophageal cancer specimens was similar (55.8%, 58 of 104) to other population cases of esophageal cancer[10]. Moreover, there was a marked difference in the frequency of Pro/Arg alleles between HPV-positive and HPV-negative groups. p53 Arg allele alone was detected in 71.0% (39/55) in the HPV-positive group, whereas in 40.8% (20/49) in the HPV-negative group (P < 0.05; OR, 3.53; 95%CI, 1.57-7.98) (Table 1). The allele frequency of Arg alleles in cancer cases (0.68) was higher than that in normal mucosa samples (0.54) (P < 0.05;OR, 1.80; 95%CI, 1.21-2.69). 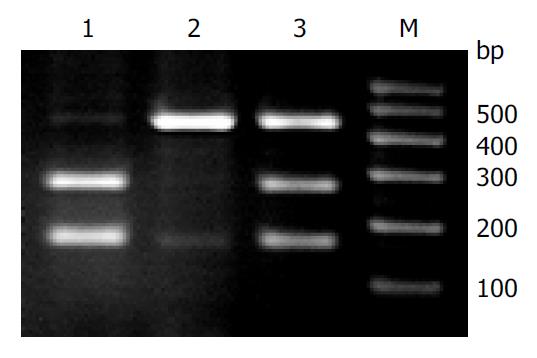 Figure 2 Restriction analysis of p53 codon 72 polymorphism. The PCR product from the proline alleles had a single band with a fragment of 412 bp in length. The arginine was cleaved by Acc II, yielding two small fragments (252 and 160 bp). Lane M: 100 bp DNA ladder marker; Lane 1: homozygous for arginine; Lane 2: homozygous for proline; and Lane 3: di-gested sample, heterozygous for the polymorphism.
Arg allele at the codon 72 in surrounding normal mucosae in HPV-associated esophageal cancer

Infection with human papilloma virus is an important etiological factor in the development of SCC and it has been proposed that individuals homozygous for Arg/Arg at codon 72 of p53 are several times more susceptible to HPV-mediated cancer[10,17]. In agreement with the result, studies in India and Mexico also found a strong increase in SCC risk associated with p53 polymorphism and the presence of HPV infection[18,19]. In China similar research has been carried out on esophageal SCC, ovarian carcinoma, and breast carcinoma[20]. However, several studies conducted in different countries failed to reproduce this observation[21-25].This polymorphism has been shown to vary with ethnic and geographical distribution.However, its influence has not been elucidated in the Kazakh population.

p53 tumor-suppresser protein accmulates rapidly through post-transcriptional mechanisms and is also activated as a transcriptional factor, thus leading to growth arrest or apoptosis when DNA damage has occurred[26]. The ubiquitin-dependent proteolytic pathway plays a major role in selective protein deregulation. E6 oncoprotein of oncogenic HPV-16/18 might use this cellular proteolytic system to target p53 protein[7] and bind to a cellular protein of E6-AP, and the E6-AP complex might interact with p53, resulting in the rapid ubiquitin-dependent degradation of p53[27]. The level and half-life of p53 in E6 immortalized cell lines or in HPV-positive cervical carcinoma cells have been reported to be generally decreased[28,29]. Certain HPV types such as HPV-16/18 found in SCC of esophagus suggested a model by which E6 degraded cell growth control by elimination of the p53 tumor suppresser protein and led to HPV-associated esophageal SCC[10,30].

In conclusion, the current study reveals the potential role of the polymorphism of p53 at codon 72 in HPV-associated carcinogenesis of esophageal SCC in Kazakh population. Individuals carrying Arg alleles compared to those with Pro alleles have an increased risk for esophageal SCC.