AIM: Microcirculatory disturbances are important early pathophysiological events in various organs during acute pancreatitis. The aim of the study was to evaluate changes in microperfusion of the pancreas, liver, kidney, stomach, colon, skeletal muscle, and to investigate the influence of heparin on the organ microcirculation in caerulein-induced experimental acute pancreatitis.

Pathophysiolsogy of acute pancreatitis (AP) is heterogeneous and involves a complex cascade of events. Impaired tissue perfusion within the pancreatic gland is one of the early disorders accompanying the disease[1,2]. Prolonged ischaemia and impaired tissue oxygenation, resulting from vasoconstriction, hemoconcentration, hypercoagulation, leukocyte adherence, increased vascular permeability, and interstitial oedema, play an important role in the progression of the disease, leading to the development of pancreatic necrosis[2-4]. Besides the pancreas, the microcirculatory disturbances, as a consequence of hypovolemia and systemic inflammatory response, are also observed in other organs[1,5-8].

Although the hypovolemia and impairment of cardiac output can be normalized easily by vigorous fluid replacement, microcirculatory disturbances may be prevented merely by adequate fluid therapy, even though the cardiovascular parameters are stabilized at the baseline level[9]. Various vasoactive mediators, as bradykinin, endothelin, thromboxan, platelet activating factor, and nitric oxide participate in the development of microcirculatory failure[3,8]. In the last decade, the beneficial effect of therapeutic strategies in acute pancreatitis, affecting vasoactive mediators, is confirmed in several experimental studies.

One of the possible therapeutic agents, influencing microcirculatory disturbances by means of its anticoagulant and antiinflammatory properties, which could be applied in acute pancreatitis, is heparin. Some reports underlined beneficial impact of this well known polysaccharide on the course of the disease[10-12]. In this study we examined whether heparin influenced splanchnic malperfusion in experimental caerulein-induced acute pancreatitis in rats.

The study was carried out on 34 male Wistar rats weighing 180-200 g. The rats were kept on a standard rat chow and fasted overnight before the experiment with water ad libitum. Acute pancreatitis was induced by four intraperitoneal injections of caerulein (Cn) (Sigma, St. Louis, USA) (15 μg/kg) in 1 mL of saline at 1h intervals: at the begining, and consecutively after the first, second, and third hour of the experiment. Five hours after the first caerulein injection, rats were anaesthetized with pentobarbital sodium (40 mg/kg). Following the anaesthesia, a laparotomy was performed, and a fiberoptic probe of laser Doppler flowmeter (Periflux 4001, Perimed Jarfalla, Sweden) was positioned against the surface of the pancreas, liver, kidney, stomach, colon, and skeletal muscle of thigh in order to estimate the organs perfusion. Blood flow was measured in three different portions of each organ, the mean values were calculated, and presented as percent changes from basal values obtained in control rats (100%). After the measurements, blood was aspirated from the inferior caval vein for hematocrit and interleukin 6 tests, the pancreas was removed for microscopic evaluation, and the animals were exsanquinated.

This study was approved by the Ethical Committee of the Medical University of Gdańsk.

The IL-6 bioassay was performed using the IL-6 dependent mouse hybridoma cell line B9 obtained from Dr. Lucien Aarden, Netherland Red Cross, Amsterdam. B9 cells were cultured in flat bottomed microtitre plates (10000 cells/well) in the presence of serial dilutions of test sera. Starting serum dilutions were 1:10 for all specimens. After 48 h of incubation, proliferation of the B9 cells was measured using a rapid colorimetric MTT (tetrazolium) assay. The concentration of recombinant IL-6 producing half maximal proliferation was defined as one unit of activity, and the quantity of IL-6 in a serum sample was calculated by reference to a standard curve. Polyclonal anti-IL-6 antibody (Boehringer-Mannheim) was added into selected wells at concentrations: 1:10, 1:20, 1:50 in order to confirm the specificity of the assay. The antibody completely blocked IL-6 activity.

Data are presented as mean ± SD. The differences between the groups were analysed by means of ANOVA test. Probability values less than 0.05 were considered significant.

Four intraperitoneal caerulein injections resulted in marked pancreatic oedema in all the rats. The microscopic examination revealed oedematous form of acute pancreatitis, with inter-and intralobular oedema, vacuolisation of parenchymal cells, and leukocyte infiltration within the pancreatic gland. No parenchymal necrosis was detected.

Caerulein induced acute pancreatitis resulted in a significant drop of pancreatic microperfusion to 36.9% ± 4% of basal values. Administration of heparin significantly improved the microcirculation of the pancreas up to 75.9% ± 13%. Hepatic perfusion in rats with pancreatitis receiving no treatment was decreased to 56.6% ± 6%, heparin injection raised this parameter to 75.2% ± 16%. Renal blood flow in group II with pancreatitis was diminished to 45.1% ± 6%, which was improved significantly with heparin treatment up to 79.3% ± 15%. Microcirculatory values of stomach and colon wall in acute pancreatitis group were reduced to 65.2% ± 8% and 69.8% ± 6% respectively. Intraperitoneal injection of heparin caused improvement in the blood flow in stomach to 78.1% ± 19%, and especially in colon to 102.55% ± 19%. Similarly, skeletal muscle perfusion in rats with pancreatitis was significantly ameliorated after heparin administration from 59.2% ± 3% to 77.9% ± 13% (Figure 1). 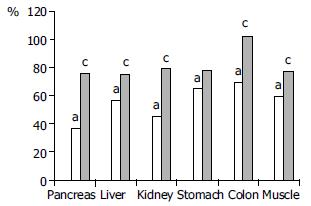 Caerulein-induced experimental pancreatitis was adopted by many authors to investigate microcirculatory changes of AP. The present study indicated that in Cn-induced acute pancreatitis the microperfusion of the pancreas decreased to 36.9% of basal values. These observations are in accordance with other investigations, which revealed the drop of local pancreatic blood flow in Cn induced pancreatitis[2,13,14], although a majority of microcirculatory studies did not report such an obvious deterioration of the pancreatic perfusion as observed in the current study. Such a sharp decline of the pancreatic microperfusion might be influenced by the fact that the animals did not receive i.v. fluid administration, and could be elucidated also by an additional stress resulted from six i.p. injections of the drugs in conscious animals. In Liu’s study[14], the water immersion stress in rats with Cn-induced pancreatitis caused further pancreatic ischemia, diminishing the pancreatic blood flow to 37% of the normal value, and was considered as an aggravating factor in AP.

In contrast to these observations, the Heidelberg group described increased pancreatic capillary flow in experimental oedematous pancreatitis[15,16]. The discrepancy of the results may be explained by various techniques of microcirculatory measurements and i.v. fluid administration. On the other hand, in the model of necrotizing pancreatitis, the authors observed a significant decrease of the pancreatic capillary flow[16].

The disturbances of microcirculation in acute pancreatitis were not only confined to pancreatic capillary bed but were also observed in other organs[5-8]. It was suggested that diffused microcirculatory disorders might play a crucial role in the development of the pancreatitis-associated multiorgan dysfunction syndrome[7], some authors even defined severe AP as a systemic dysfunction syndrome[7,17].

Microcirculatory disturbances in AP comprised many components: decreased capillary blood flow and capillary density, increased capillary permeability, and enhanced leukocyte-endothelial interaction[7]. It still remains unclear which of these factors is the initiating one or the most important. It seems to be logical that any effort to improve the microcirculation may be beneficial for all organs, irrespective of the underlying initiating factors.

Many studies documented positive impacts of various treatments on improving microcirculation in acute pancreatitis. In studies by Konturek et al[13] and Liu et al[14] pancreatic microperfusion was ameliorated with L-arginine (nitric oxide donor) treatment. Improvement of impaired pancreatic microcirculation by isovolemic hemodilution with dextran was observed by Klar et al[19]. Rheologic properties of pentoxifylline, its antiinflammatory effect, reduction of thrombus formation, and lowering of blood viscosity had a positive influence on Cn-induced pancreatitis in study of Gomez-Cambronero et al[20]. An advantageous effect of ICAM-1 antibodies on microcirculation in AP was shown by Foitzik et al[21], and Werner et al[22]. A single i.v. injection of bovine hemoglobin in an experiment by Strate et al[4] reduced microcirculatory dysfunction and pancreatic tissue damage in rodent pancreatitis. In a study by Zhao et al[3,4] Chinese natural medicines: Yuanhu (YHI) and Huoxuehuayu (HHI-I) had a positive impact on acute pancreatitis development, including pancreatic malperfusion and serum IL-6 level. Recently, it was shown that endothelin receptor blockade might be a promising therapeutic approach in AP, resulting in improvement of microcirculation, decreased capillary permeability and tissue injury[7,23,24].

Intraperitoneal heparin administration in the current study significantly improved blood perfusion of examined organs. The beneficial effect of heparin on pancreatic microcirculation may in theory have an influence on severity of the disease, it could prevent or restrict the development of pancreatic necrosis. It was shown in our recent publication that heparin treatment in oedematous pancreatitis ameliorated the microscopic alterations of the pancreas: reduced leukocyte infiltration and diminished pancreatic oedema[25].

By improving hepatic capillary blood flow, heparin could influence phagocytic Kupffer cell function in the liver which is important for eliminating antigens and toxic substances in acute pancreatitis. The study of Forgacs et al[26] showed a close relationship between liver phagocytic function and hepatic microperfusion in the early stage of experimental pancreatitis. On the other hand, Chen et al[27] revealed that a significant number of adherent leukocytes was observed in hepatic microcirculation 2 h after the induction of AP. This could impair hepatic perfusion, and might be a potential target for heparin treatment. In another study, Chen et al[8] observed beneficial effects of protease inhibitor gabexate mesilate on pancreatic and hepatic microcirculation.

It was shown that decreased capillary blood flow in the colonic mucosa was associated with impaired gut barrier function and increased translocation of live bacteria through the morphologically intact colonic wall[28]. The present study revealed that heparin treatment in the group with pancreatitis led the altered microperfusion of the colonic wall to the normal level. It suggests that heparin administration may play a role in prevention of secondary pancreatic infection.

Besides the organ microcirculatory improvement, heparin administration significantly decreased interleukin 6 activity, and reduced hematocrit level. IL-6 was a reliable predictor of acute pancreatitis severity[29]. Diminished IL-6 activity in the group with AP treated with heparin may indicate that this therapy could limit inflammatory response observed in AP. Beneficial influence of heparin on hematocrit level, observed in group III, may also suggest that heparin reduces capillary permeability, not just in the pancreatic gland, and prevent the fluid to the third space. Therefore heparin therapy may reduce the need for vigorous fluid resuscitation as applied in patients with AP.

The improvement of systemic microperfusion after heparin administration in rats with AP might be explained by its anticoagulatory effect which diminished blood viscosity and facilitated capillary blood flow. Besides its anticoagulant properties, heparin may play a positive role in AP treatment due to its antiinflammatory effects: TNF inhibition[30], protection from oxygen free radicals[31], the blockade of complement activity[32] and histamine release[33]. It was also shown that heparin prevented post-ischemic endothelial cell dysfunction[34], neutrophil adhesion[35], and had an inhibitory effect on the biosynthesis and release of endothelin-1, a very potent endogenous vasoconstrictor[36,37].

In conclusion, heparin counteracts microcirculatory disorders, not only within the pancreas but also in other organs. The preservation of organ microperfusion with this treatment may be significant for diminishing and treating local and systemic complications in AP.