AIM: To elucidate the role of COX-2 in the development of capillary leakage in rats with acute interstitial pancreatitis.

METHODS: Rats with acute interstitial pancreatitis were induced by caerulein subcutaneous injection. Reverse transcription-polymerase chain reaction (RT-PCR) was used to determine the gene expression of COX-2 in pancreatic tissues, spectrophotometry was used to assay the parameters of acute pancreatitis such as the serum amylase and plasma myeloperoxidase, and determination of capillary permeability in the pancreas by quantifying the permeability index (PI) assisted response of pancreatic microvascular via intravital fluorescence microscope video image analysis system.

Pancreatic microcirculatory disturbance has been considered as one of the possible and important causative factors for the development of acute pancreatitis (AP)[1-5], although the underlying mechanism is unclear. COX-2, known as prostaglandin endoperoxide synthase-2, is a rate-limiting enzyme in the production of prostaglandins and an important regulator of vascular function[8,9]. Under resting conditions, the level of COX-2 was undetectable. COX-2 expression can be inducible by a wide range of extracellular and intracellular stimuli, including lipopolysaccharide, forskolin, interleukin-1 (IL-1), tumor necrosis factor (TNF), epidermal growth factor, interferon-γ, platelet activating factor and endothelin, suggesting that COX-2 plays a critical role in inflammatory disorder[6,7]. Previous studies demonstrated that COX-2 was a classic example of immediate early or primary response gene activation and generally considered as a proinflammatory enzyme[10-15], suggesting COX-2 may serve as one of triggering factors of inflammation. Studies showed that inducible cyclooxygenase (COX-2) might indirectly involve in the regulation of human vascular endothelial cells (HUVEC) inflammation[16,17]. However, no further studies examined it. For the purpose of verification of the result, reverse transcription polymerase chain reaction (RT-PCR) and intravital fluorescence microscopy with fluorescein isothiocyanate (FITC) labeled erythrocytes were used to study COX-2 gene expression and pancreatic microvasculature, with the aim of consolidating the relevance between the gene expression of COX-2 and dysfunction of pancreatic local microvasculature during acute edematous pancreatitis (AEP).

A total of 96 male Wistar rats (250-350 g) were starved 15 h prior to the experiments with water ad libitum and randomly divided into 2 groups: (1) AEP group (n = 72), 24 rats for extraction of total RNA from pancreatic tissue and 3 mL blood samples of portal venous for assay of serum amylase (AMS) and plasma myeloperoxidase (MPO); 24 rats for studying pancreatic microvasculature by intravital fluorescence microscope with fluorescein FITC-RBC; 24 rats for accessing the pancreatic microvasculature permeability and water content. (2) Normal control group (n = 24). The model of AEP was established by subcutaneous injection of caerulein (Sigma) as previously described[1]. 1 h and 2 h after the beginning of experiment all experimental groups were injected caerulein 5.5 μg/kg and 7.5 μg/kg respectively, while control group received the same volume of 9 g/L sodium chloride.

After 2, 4, 8, 16 and 24 h of caerulein injection, the rats were anesthetized with intraperitoneal injection of 30 g/L barbitone sodium (35 mg/kg) and the sacrificed for extraction of total RNA. The isolation of total RNA was prepared from 100 mg pancreatic tissue, using Trizol reagent Kit (Gibco BRL). Yield and purity of RNA preparations were checked spectrophotometrically at 260 nm and 280 nm and quality was inspected visually on 13 g/L agarose gels after ethidium bromide staining.

RT-PCR was performed in combined one-tube reaction kits (TakaraTM) according to the manufacture’s suggestions. β-actin was used as an internal control. The primers for control and COX-2 were as follows: β-actin (sense) 5’-GATGGTGGGTATGGGTCAGAA-3’, (antisense) 5’-CTAGGAGCCAGGGCAGTAATC-3’; COX-2 (sense) 5’-CTGTATCCCGCCCTGCTGGT-3’, (antisense) 5’-GAGGCACTTGCGTTGATGGT-3’. All the primers were synthesized by Life Technology (HongKong, China). RT-PCR was run in GeneAmp 9600 (Perkin-Elmer), following procedures: 50 °C for 30 min,1 cycle; 94 °C for 2 min, 1 cycle; 94 °C for 30 s, 55 °C for 30 s, 72 °C for 40 s, 30 cycles; 72 °C for 10 min, 1 cycle. 5 μL PCR products was placed onto 13 g/L agarose gels with ethidium bromide staining, using an ultrailluminator, and the level of COX-2 mRNA was expressed as the quotient (Q) of the integrated optical density values (IOD) for the COX-2 and the β-actin bands (Q = IOD COX-2 band/β-actin band).

The activity of MPO, an index of tissue leukocyte recruitment, is a marker of inflammation of tissue. The activity of MPO in the pancreatic tissues was determined following the method described by Calkins[20] with minor modifications.

For studying response of pancreatic microvasculature we adopted erythrocytes (RBC) labeled by FITC using the approach as previously described. Briefly, washed RBC obtained from an experimental rat was incubated with PBS (137 mmol/L NaCl, 6.4 mmol/L Na2HPO4, 2.7 mmol/L KCl, 1.5 mmol/L KH2PO4, pH7.8) solution containing 1 mg/mL FITC. The labeled cells were then washed twice with a saline solution containing 10 g/L bovine serum albumin (Sigma) to remove unconjugated fluorescent dye. The final volume percentage of the labeled cells was adjusted approximately to 50% by adding an isotonic saline solution, and an aliquot 91 mL/kg of these suspensions was injection through a tail vein of the rats to observe density and capillary perfusion by intravital fluorescence microscope (OLYMPUS X-70).

Half an hour before caerulein injection, the rats were given an intravenous injection of Evans blue (20 mg/kg) via a tail vein. Briefly, the lungs and pancreas were excised, weighted, and placed in 5 mL of formaldehyde solution and homogenized for 1 min. After incubated at room temperature for 16 h, the pancreas and lungs were measured at 650 nm in Beckman spectrophotometer. The concentration of Evans blue (EB) was determined by calculation against a standard curve. The blood was centrifuged at 600 r/min for 10 min and the concentration of EB in the serum was determined as described above. The permeability index (PI) = [Evans blue]tissue/[Evans blue]serum. Water mass fractions in the pancreas were used as a parameter of organ water accumulation after panceatitis induction. The tissues were removed in a humidity chamber and the wet mass was measured immediately. The tissue was dried at 70 °C to a constant mass for the determination of dry mass. Organ edema was determined by calculating tissue water content according to the following formula: Water mass fraction (%) = (1 - dry mass/wet mass) × 100%.

All results were represented as mean ± SD. The significance of changes were evaluated by means of a F test in comparisons of the same time point in two groups or by analysis of variance (Newman-Keuls) when different time points in the same group were compared. Differences were considered significant when the P < 0.05.

RESULTS
RT-PCR detection of COX-2 in the pancreas 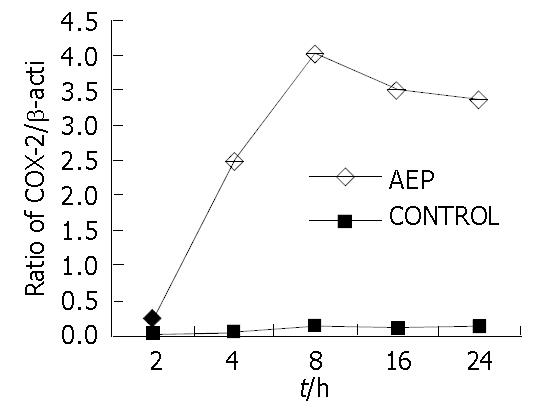 Figure 1 Time course of COX-2 gene expression in pancreas. After induction by caerulein, the expression of COX-2 mRNA in AEP was increased, which peaked at the 8th h and remained at a high level.
Inflammatory indicators for pancreatitis

The activity of serum AMS and MPO in AEP and controls are shown in Table 1.

Microvascular permeability in pancreas and lungs 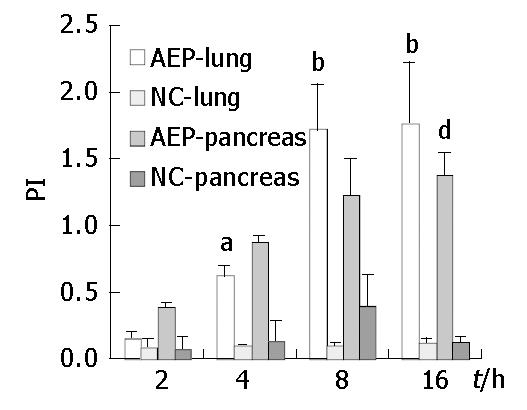 Previous studies have discovered that COX-2 is the principal isoform of cyclooxygenase that participates in inflammation, while there is little COX-2 activity present in the stomach, kidney, or platelet. COX-2 is usually barely detectable during normal physiologic conditions. However, in response to several pro-inflammatory stimuli, the level of COX-2 expression can be rapidly induced to increase[18-20]. In our study, we found that COX-2 transcription remains at a very low level in normal pancreatic tissue. In contrast, COX-2 expression was increased rapidly after induction of pancreatitis by caerulein. COX-2 may serve as one of factors of at the early phase of inflammation. During the active inflammation, the synthesis of PGE2 (an important inflammatory mediator), the increase of vaso-permeability, sequestration of inflammatory cells and pyrogen are likely resulted from COX-2.

It has been reported that a strong correlation between the number of intra-vascular neutrophils and MPO existed. Thus these parameters were measured to quantify the total neutrophil sequestration to the pancreas[20-22]. In our previous study, we found the positive correlation between COX-2 and MPO in AEP (r = 0.5449, P < 0.05). From this study, the elevation of plasma myeloperoxidase was present in the experiment, suggesting MPO can serve as an indicator of AEP.

There is increasing evidence that the vascular endothelium, which is directly exposed to various fluid mechanical forces generated by pulsatile blood flow, can discriminate among these stimuli and transduce them into genetic regulatory events, as COX-2 gene can be upregulated by steady laminar shear stress stimulation[24]. However little is known about the upregulation of COX-2 disturbing microcirculation. It is generally accepted that the dysfunction of pancreatic microcirculatory serves as an important causative factor for the development of acute pancreatitis. The morphology of pancreatic microcirculation revealed that pancreatic lobule is supplied by a single intralobular arteriole, which is considered end-artery[21,23-25]. This characteristic suggested that pancreatic lobules are susceptible to ischemic injury due to spasm of intralobular arterioles. In this study, we observed the responses of pancreatic microvascular after caerulein induction, which demonstrated that the enhanced COX-2 mRNA might involve in modulating the dynamical changes of the pancreatic microcirculation. The decrease of pancreatic capillary blood flow, the reduction of functional capillary density, and capillary perfusion irregular intermittent perfusion and capillary artery hypoperfusion were observed, especially at 8th h, which was coincident with the enhanced expression of COX-2 mRNA after AEP.

Based on the pathologic changes above, we postulate that COX-2 induce the inflammation of vascular endothelia, result in increase of vasopermeability, sequestration of leukocyte and water content in the pancreatic tissue. A functional role of the COX-2, mediating the changes of pancreatic microcirculation has several possible explanations: (1) it may be cooperated with inducible nitric oxide synthase (iNOS), and both mediators can activate platelets and leukocytes, promote the occurrence of microthrombus and affect microcirculatory stability[26]; (2) it may be in linkage with the overexpression of adhesion molecules (e.g. ICAM-1, PCAM-1). Adhesion molecules are known to regulate partly the disturbance of microvascular barrier both in vivo and in vitro[27,28]. Treatment with the monoclonal antibodies against ICAM-1, PECAM-1 to rats with gut barrier failure caused by intestinal ischemia and reperfusion (I/R) seemingly most efficiently reduces the severity of I/R (i.e., enhanced capillary blood flow in the pancreas, reduced leukocyte rolling and stabilized capillary permeability)[29,30]; (3) it may be feedback control of COX-2 expression through peroxisome proliferatoractivated receptor-γ (PPAR-γ). PPAR-γ expressed in macrophages has been postulated as a negative regulator of inflammation[9]. Additional investigation will be necessary to distinguish between these mechanisms of action.