AIM: To investigate the effects induced by emodin on single smooth muscle cells from rat colon in vitro, and to determine the signal pathways involved.

RESULTS: (1) Emodin dose-dependently caused colonic smooth muscle cells contraction; (2) emodin induced an increase in intracellular Ca2+ concentration; (3) the contractile responses induced by emodin were respectively inhibited by preincubation of the cells with ML-7 (an inhibitor of MLCK) and calphostin C (an inhibitor of PKC); and (4) Incubation of cells with emodin caused translocation of PKCα from cytosolic area to the membrane.

CONCLUSION: Emodin has a direct contractile effect on colonic smooth muscle cell. This signal cascade induced by emodin is initiated by increased [Ca2+]i and PKCα translocation, which in turn lead to the activation of MLCK and the suppression of MLCP. Both of them contribute to the emodin-induced contraction.

Gastrointestinal dysmotility underlies frequent clinical entities such as diabetes mellitus, chronic constipation, irritable bowel syndrome, postoperative ileus etc. Currently few drugs have been proven to be efficient at improving motility. Emodin is a naturally occurring anthraquinone present in the roots and bark of numerous plants of the genus Rhamnus[1]. Extracts from the roots, bark, and/or dried leaves of buckthorn, senna, cascara, aloe, frangula, and rhubarb have been used as laxatives since ancient times and currently are widely used in the preparation of herbal laxative preparations in China[2-5]. Anthraquinone glycosides are poorly absorbed from the gastrointestinal tract but are cleaved by gut bacteria to produce aglycones, including emodin which are more readily absorbed and thought to be responsible for the purgative properties of these preparations[1]. The reported biological effects of emodin include antitumor, antibacterial and anti-inflammatory actions[6-9]. Emodin also possesses prokinetic effect on gastrointestinal tract. Stimulatory actions of emodin on gastrointestinal smooth muscle have been described in several studies[10-12]. However, its mechanism in accelerating gastrointestinal motion is not yet clarified.

Because of the potential therapeutic implications of emodin in gastrointestinal hypomotility disorders, this study was then designed to further characterize the effects of emodin on smooth muscle cells from rat colon in vitro and to investigate the signal transduction cascade leading to cell contraction induced by emodin.

Fluo-3 AM and Pluronic F-127 were from Molecular Probes (USA). Rabbit anti-PKCα IgG and goat anti-rabbit IgG FITC were from Santa Cruz Biotechnology (USA). Collagenase type II, emodin, trypsin inhibitor and HEPES were all purchased from Sigma Co (USA). DMEM was purchased from GIBCO Co., USA. FBS was from Hyclone (USA). All other reagents were from LianXing Co.,Ltd (China). Emodin was dissolved in dimethyl sulfoxide and ethanol mixture (2:8) to make stock solution and the final concentration of the vehicle in the solution did not exceed 0.1%.

Isolation of smooth muscle cells Smooth muscle cells from rat distal colon were isolated as described previously[13]. Briefly, a segment of 5-cm long distal colon was dissected and digested to yield isolated smooth muscle cells. The tissue was incubated for 2 successive 30-min periods at 31 °C in 10 mL of HEPES (pH7.4) containing 1 g/L collagenase type II and 0.1 g/L soybean trypsin inhibitor. After the second enzymatic incubation, the medium was filtered through 500 μm Nitex mesh. The partially digested tissue left on the filter was washed with collagenase-free buffer solution, and muscle cells were allowed to disperse spontaneously for 30 min. The cells were harvested by centrifugation at 350 r/min for 10 min. After a hemocytometric cell count, the harvested cells were resuspended in collagenase-free buffer solution and diluted as needed.

Measurement of smooth muscle cell contraction Individual cell length was measured by scanning micrometry as described previously[13]. Aliquots consisting of 1 × 104 cells in 0.25 mL of medium were added to 50 μL of a solution containing emodin with or without prior incubation with ML-7(10-5 mol/L) or Calphostin C (10-6 mol/L). The reaction was allowed to proceed for 1 min and terminated by the addition of acrolein at a final concentration of 10 mL/L. The lengths of 30 consecutive intact healthy cells were measured through a phase-contrast microscope fitted with a video camera and connected to a Legend computer. The CIMAS program was used to measure the length. The contractile response was defined as the decrease in the average length of the 30 cells and was expressed as the percent change relative to control length.

Single cell intracellular Ca2+ measurements Changes in [Ca2+]i were estimated as described elsewhere by using laser scanning confocal microscopy (Radiance 2000; Bio-rad, Hertfortdshire, UK)[17] linked to an inverted epifluorescence microscope (Olympus, Japan). The scanning box was set at a resolution of 256 × 256. Only one fixed combination of laser intensity (20% maximum) and photomultiplier gain (1800 of a maximum of 4096) was used during scanning.

To load the cells with fluorescent Ca2+ indicator fluo-3, smooth muscle cells on the coverslips were incubated with 5 μmol/L of the membrane permeant acetoxymethyl ester of the dye (fluo-3 AM; Molecular Probes, USA) and Pluronic F-127 (0.4 g/L; Molecular Probes, USA) dissolved in HEPES-ringer buffer [containing (mmol/L): NaCl 135, KCl 5.9, CaCl2 1.5, MgCl2 1.2, HEPES 11.6 and glucose 11.5, at pH7.3] for 30 min at 37 °C. Cells were subsequently washed twice with HEPES-ringer buffer and further incubated for 20 min to allow de-esterification of the dye.

Coverglass chambers were then mounted on the microscope stage and continuously superfused with HEPES-ringer buffer. The cells loaded with fluo-3 were illuminated at 488 nm, and fluorescent emissions of 525/30 nm were recorded at an intensity of fluo-3. Digital Ca2+ images were collected at 10 s intervals. Because fluo-3 is a single wavelength indicator, it is not possible to apply the ratiometric method to quantitative determination of [Ca2+]i. Therefore, the intensity of fluo-3 fluorescence was normalized in the temporal analysis. The relative values of fluorescence intensity of the dye (Ft) were used to represent the [Ca2+]i.

Cell culture and confocal imaging of PKCα cell culture After enzymatic incubation, the dispersed cells were collected in DMEM with 100 mL/L FBS-medium, then transferred to coverslips coated with poly-L-lysin, and allowed to settle overnight in a humidified 50 mL/L CO2 environment.

Labeling with PKCα antibody and confocal microscopy Cells were incubated for 1 h with normal goat serum, followed by 3 washes in PBS with gentle agitation. Subsequently, the cells were incubated for 1 h with the primary antibody, a rabbit anti-PKCα IgG followed by 3 washes with PBS with gentle agitation. This step was followed by incubation of the cells for 1 h with secondary antibody (goat anti-rabbit IgG FITC). Then the cells were washed 3 times with PBS with gentle agitation. Finally, the cells on the coverslip were mounted onto a slide. Control slides were made by incubating cells with the secondary antibody only. The excitation parameter for fluorescent probes was as follows: FITC excitation at 488 nm and emission at 520 nm. Immunostained cells were visualized with an Olympus × 40 objective by confocal laser scanning microscopy (Bio-Rad radiance 2000). Image restoration and analysis were performed in Lasersharp2000 and Laserpix.

The data are presented as mean ± SD, and n represents the number of experiments. Statistical analysis was made by Student’s unpaired t test when applicable. P values less than 0.05 were considered to be significant. 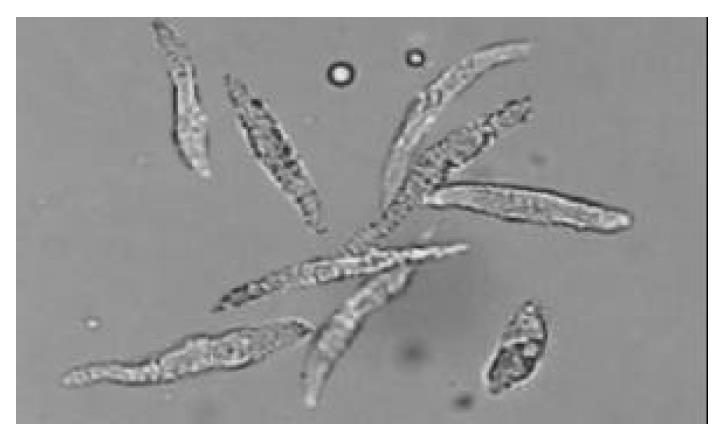 Figure 1 Freshly isolated colonic smooth muscle cells appeared in spindle shape with diverse length. Some of them were re-laxed while others were at different phases of contraction. 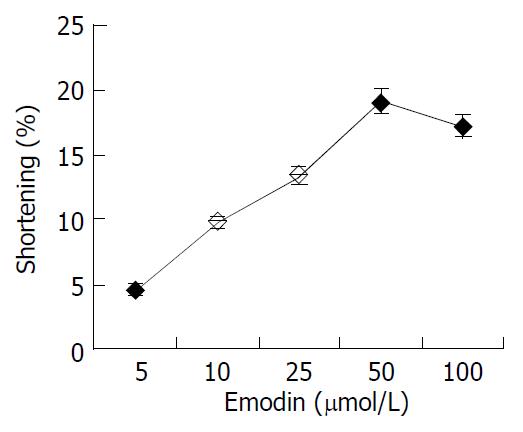 Figure 2 Dose-response curve representing the effects of emo-din on the length of isolated colonic smooth muscle cell. Val-ues are mean ± SD of 3 experiments.
Effect of emodin on [Ca2+]i 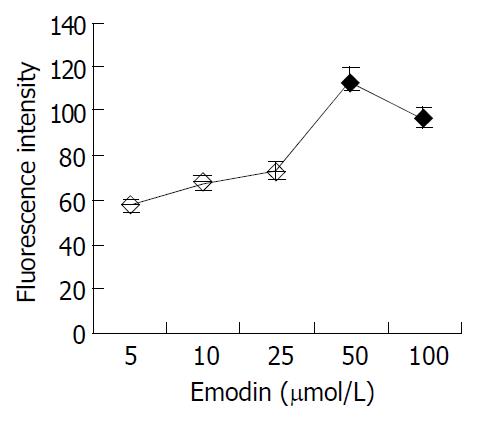 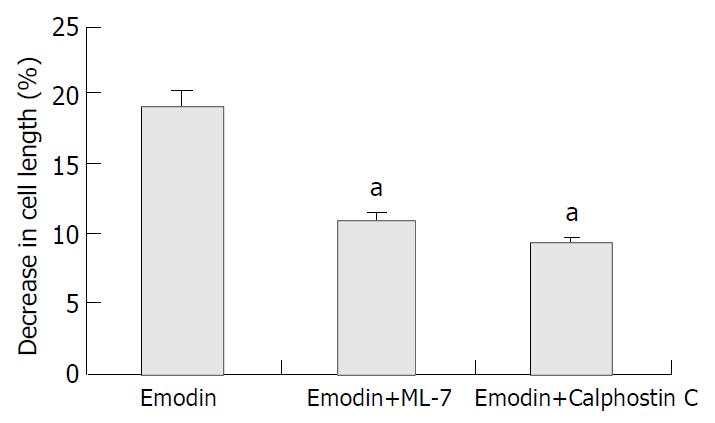 PKCα is thought to be inactive in the cytoplasm and therefore must translocate to the plasma membrane to be activated. Recent studies have demonstrated that PKCα can translocate from the cytoplasm to membrane on stimulation by contractile agonists during smooth muscle cell contraction[18-21]. To determine whether activation of PKCα is involved in contraction of smooth muscle cells induced by emodin, we performed immunofluorescent labeling of PKCα in isolated smooth muscle cells, followed by confocal microscopy. Our data indicate that, at resting state, PKCα is mainly distributed throughout the cytoplasm. This is in contrast to the distribution of PKCα following emodin stimulation, as shown in Figure 5, PKCα translocated from the cytosolic part and aligned itself along the membranes of contracted cells. 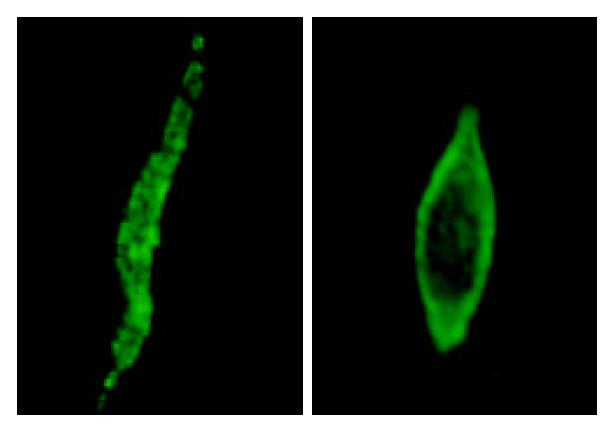 Figure 5 Membrane translocation of PKCα in response to emo-din stimulation in smooth muscle cells of rat colon. Confocal microscopy showed PKCα distributed throughout the cell at rest state (left). When cells were stimulated with emodin (50 μmol/L), PKCα translocated to the membrane (right).
DISCUSSION

On the basis of our findings, we propose the existence of an intracellular signaling cascade leading to cell contraction in colonic smooth muscle induced by emodin. This cascade is initiated by increased [Ca2+]i and PKCα translocation, which in turn lead to the activation of MLCK and the suppression of MLCP, both of which contribute to the emodin-induced contraction. And these results provide evidence for an excitatory role of emodin in colonic smooth muscle cells contraction and indicate that emodin may be a promising prokinetic agent in ameliorating colonic hypomotility.