METHODS: Twenty-one polymorphic micro-satellite DNA markers were analyzed with PCR both in 83 cases of colorectal cancer and in normal tissues. PCR products were eletrophoresed on an ABI 377 DNA sequencer. Genescan 3.1 and Genotype 2.1 software were used for LOH scanning and analysis. χ2 test was used to compare LOH frequency with clinicopathological data. P < 0.05 was considered as statistically significant.

CONCLUSION: Putative tumor suppressor genes on chromosome 1 may relate to sporadic colorectal carcinomas. Tumor-suppressor-genes might locate on 1p36.33-36.31 and/or 1q31.3.

LOH analysis PCR product (0.5 μL) was mixed with 0.1 μL of Genescan 500 size standard (PE Applied Biosystems, USA) and 0.9 μL of formamide loading buffer. After denaturation at 96 °C for 5 min, products were eletrophoresed on 50 g/L polyacrylamide gels on an ABI 377 DNA sequencer (PE Applied Biosystems, USA) for 3 h. Genotype 2.1 software displayed individual gel lanes as electopherograms with a given size, height, and area for each detected fluorescent peak. Stringent criteria were used to score the samples. Alleles were defined as the two highest peaks within the expected size range. A ratio of T1:T2/N1:N2 less than 0.67 or greater than 1.50 was scored as a loss of heterozygosity (Figure 2). Most amplifications of normal DNA producing two PCR products indicated preserve of heterozygosity. A single fragment amplified from normal DNA (homozygote) and fragments not clearly amplified from PCR reactions were scored as not informative. The LOH frequency of a locus was equal to the ratio of the number between allelic loss and informative cases. The average LOH frequency of chromosome 1 was the mean of the LOH frequency in all loci[14-17]. 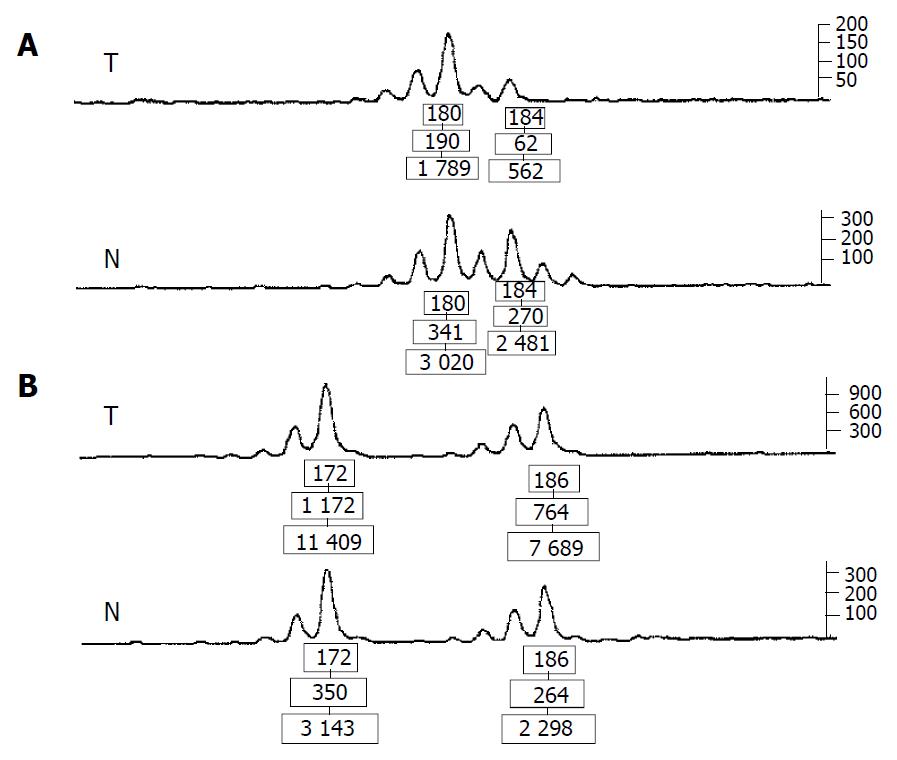 Relationship of clinicopathological features and LOH on chromosome 1

On D1S2726 locus, LOH frequency of rectal cancer was 28.57% (6/21), which was higher than that of colon cancer (0%, 0/33) (P = 0.002). No association between LOH of each marker on chromosome 1 and other clinicopathological data (patient sex, age, tumor size, growth pattern or Dukes stage) was observed. It indicated that LOH on chromosome 1 was a common phenomenon in all kinds of sporadic colorectal cancers (Table 2, Table 3).

During tumorigenesis, loss of wild-type alleles (inherited from the non-mutation-carrying parents) is frequently observed. Loss of heterozygosity (LOH) on tumor suppressor genes played a key role in colorectal cancer transformation, and LOH analysis of sporadic colorectal cancers could help discover unknown tumor suppressor genes[7,8]. In this study, LOH scanning was analyzed by Genotyper software in 83 sporadic colorectal cancer samples with 21 highly polymorphic markers, the ratio of the fluorescence intensity of alleles was studied to identify additional loci involved in colorectal tumorigenesis.

Previous studies showed that the 1p36 region frequently presented allelic loss in various cancers, such as colon cancer[20], neuroblastoma[21], hepatocellular carcinomas[22], lung cancer[23], and breast cancer[24]. But only NB gene was confirmed to be the tumor suppressor gene of neuroblastomas. In 1993, Tanaka et al[25] believed that a normal chromosome 1p36 might contain a tumor suppressor gene of colon carcinogenesis. By database referring, we found TP73 gene (1p36) might be the known candidate tumor-suppressor genes related to colon cancer in this region. TP73, a novel family member of p53, was predicted to encode a protein with significant amino acid sequence similarity to p53[29]. TP73 could inhibit cell growth in a p53-like manner by inducing apoptosis[27]. Kaghad et al[26] regarded TP73 as a tumor suppressor gene. But Sunahara found that allelic loss of p73 occurred only in 17% of colorectal carcinomas, and suggested that p73 might not play a role as a tumor suppressor in colorectal carcinoma at least not in a classic Knudson manner[28]. In our study, the highest LOH frequency was exhibited in 1p36.33-36.31, and colorectal cancer related tumor suppressor gene (s) might locate in the region. TP73gene is a member of p53 family, its effect on colorectal carcinogenisis is not certain and requires further study. Due to many genes located in the region of 1p36.33-36.31, further LOH scanning with high-density microsatellite markers in the region is necessary in order to find new candidate genes.

No association between LOH markers on chromosome 1 and the clinicopathological data was found, indicating that LOH was a common phenomenon in all sporadic colorectal cancers. However, we found that on D1S2726 locus, LOH frequency of rectal cancer was high, no LOH was found in colon cancer. In 2001, Kapiteijn et al[29] proposed that rectal cancer had more significant expression of p53 and more nuclear beta-catenin than colon cancer, and considered that the mechanism of carcinogenisis in distal colon was different from that in proximal colon. Our results could show that the mechanism of carcinogenisis in distal colon and rectum was not completely the same as in proximal colon.