AIM: To investigate p27 expression in hepatocellular carcinoma (HCC), adjacent nontumoral and normal liver tissues, and to verify whether the subcellular localization of p27 was altered in HCC.

CONCLUSION: These results suggest that p27 underexp-ressing in patients with HCC is closely associated with infiltration, metastasis, and prognosis. Alterations in the subcellular localization of p27 protein may occur early during hepatocarcinogenesis.

Abnormalities in various regulators of cell cycle frequently occur in human cancers[1-4]. Cell cycle is tightly controlled by the regulators, including cyclins, cyclin-dependent kinases (CDKs), and their inhibitors. Cyclin-dependent kinase inhibitors (CKIs) are potent negative regulators of cell cycle, and have two families on the basis of sequence homology. The inhibitors of CDK4 (INK4) family, including p16Ink4a, p15Ink4b, p18Ink4c, and p19Ink4, specifically binds to CDK4 and CDK6, and inhibits cyclin D binding. The Cip/Kip family, including p21Cip1, p27Kip1, and p57Kip2, binds to and inhibits cyclin-bound CDKs[5]. Among CKIs, p27 is thought to have crucial[6] and important roles in a variety of fundamental cellular processes[7-10]. The underexpression of p27 assessed by IHC analysis has been associated with more severe tumor grade and a negative prognostic marker in different carcinomas[11-16].

Furthermore, studies showed that reduced p27 expression was correlated with advanced tumor stages and poorer disease-free survival in patients with HCC at a variety of evolutionary stages[17-20]. However, most precious investigations are based on immunostaining of tumoral liver samples without comparing with surrounding nontumoral liver, which should be the best control tissue to be used for comparison.

In addition, p27 functions at the nuclear level by binding to and inhibiting cyclin/CDK complexes. It was recently reported that cytoplasmic displacement was an alternative way to inhibit p27 activity and might also play a role in tumor development[21]. Indeed, positive immunostaining of cytoplasmic p27 has been previously reported in various human cancers[22-25]. To address this hypothesis, the expression of p27 in tumoral, adjacent nontumoral, and normal liver tissues was evaluated by IHC analysis in patients with HCC, and the subcellular distribution of p27 was also investigated in this study.

From January 2000 to December 2001, 32 liver samples were collected from patients who had HCC and underwent surgery in our institution. All liver tumors were histologically diagnosed. Tumor gross type and stage were diagnosed using Eggel’s classification and Union International Contre Cancer (UICC) criteria. Tumor cellular differentiation was identified by Edmondson’s classification. No patient received pre-operative chemotherapy or chemoembolization. The clinicopathologic characteristics of 32 patients with HCC are listed in Table 1. Normal livers were prepared from 10 patients who were died from the accident as the controls.

After curative surgery, all patients were followed up every 3 mo till death. They were followed from 2 to 32 mo (mean 15.2 mo). Actuarial survival was measured from the day of surgical operation to that of death or last follow-up.

Liver samples were routinely fixed in 40 g/L formaldehyde solution and embedded in paraffin. After slicing into 4 μm-thick sections, IHC analysis was performed using Dako ElivisionTM plus two-step System. In brief, the sections were dewaxed in xylene, and rinsed in alcohol and graded alcohol/water mixtures. Then, 30 mL/L hydrogen peroxide was applied to block endogenous peroxidase activity. The sections were subsequently treated in a microwave oven twice for 5 min in citrate buffer (pH6.0) at high power. After blocking with goat serum, the mouse monoclonal antibodies against p27 (ZM-0340) and PCNA (ZM-0213) (Zymed Biotechnology, Zymed, CA) were applied on the slides at the dilution of 1:120 and 1:50, respectively. After rising, staining was performed by the ElivisionTM plus two-step System (kit-9902, Dako, Carpinteria, CA). The color was developed by reacting with 3,3-diaminobenzidine. Slides were then counterstained with hematoxylin, dehydrated, cleared, and mounted. Negative controls were performed by replacing the primary antibody with nonimmune mouse serum or PBS (Figure 1). A human breast cancer specimen and the reactive tonsil were used as positive controls for p27 (Figure 2) and PCNA, respectively. 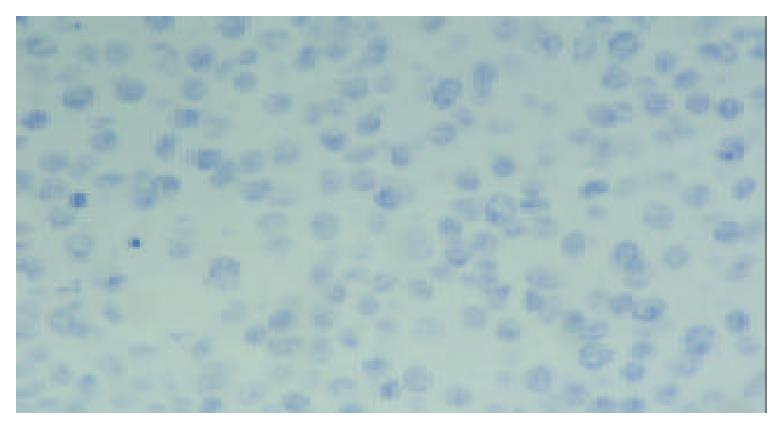 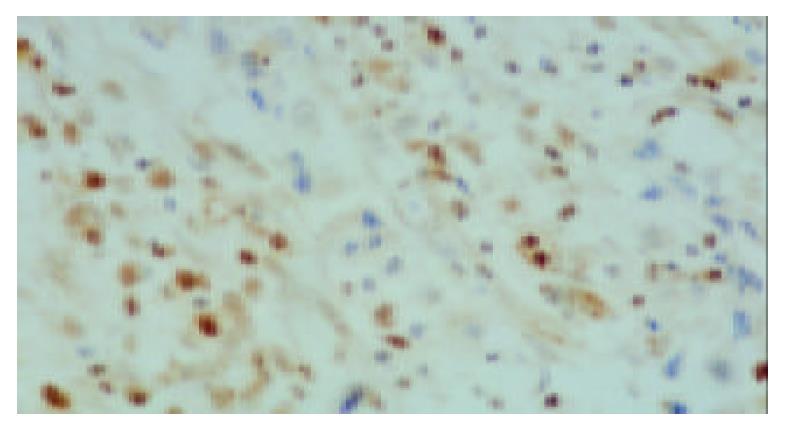 Slides were mounted independently by 2 investigators without notifying any clinical or pathological information. The positive cells for p27 and PCNA were measured by counting at least 1000 HCC cells from at least 5 randomly selected fields under the microscope. Then, LI was calculated as a percentage for each protein.

Values were expressed as mean ± SD, The Student’s t test was performed to analyze the relationship between the expression of the proteins and various clinicopathologic parameters. The cumulative survival rate was computed and actuarial survival curves were constructed by the Kaplan-Meier method. The cumulative survival rate was compared between groups using the log-rank test. Relevant prognostic factors were identified by univariate and multivariate Cox proportional hazard regression analyses. Tests were considered significant when the P values were < 0.05. 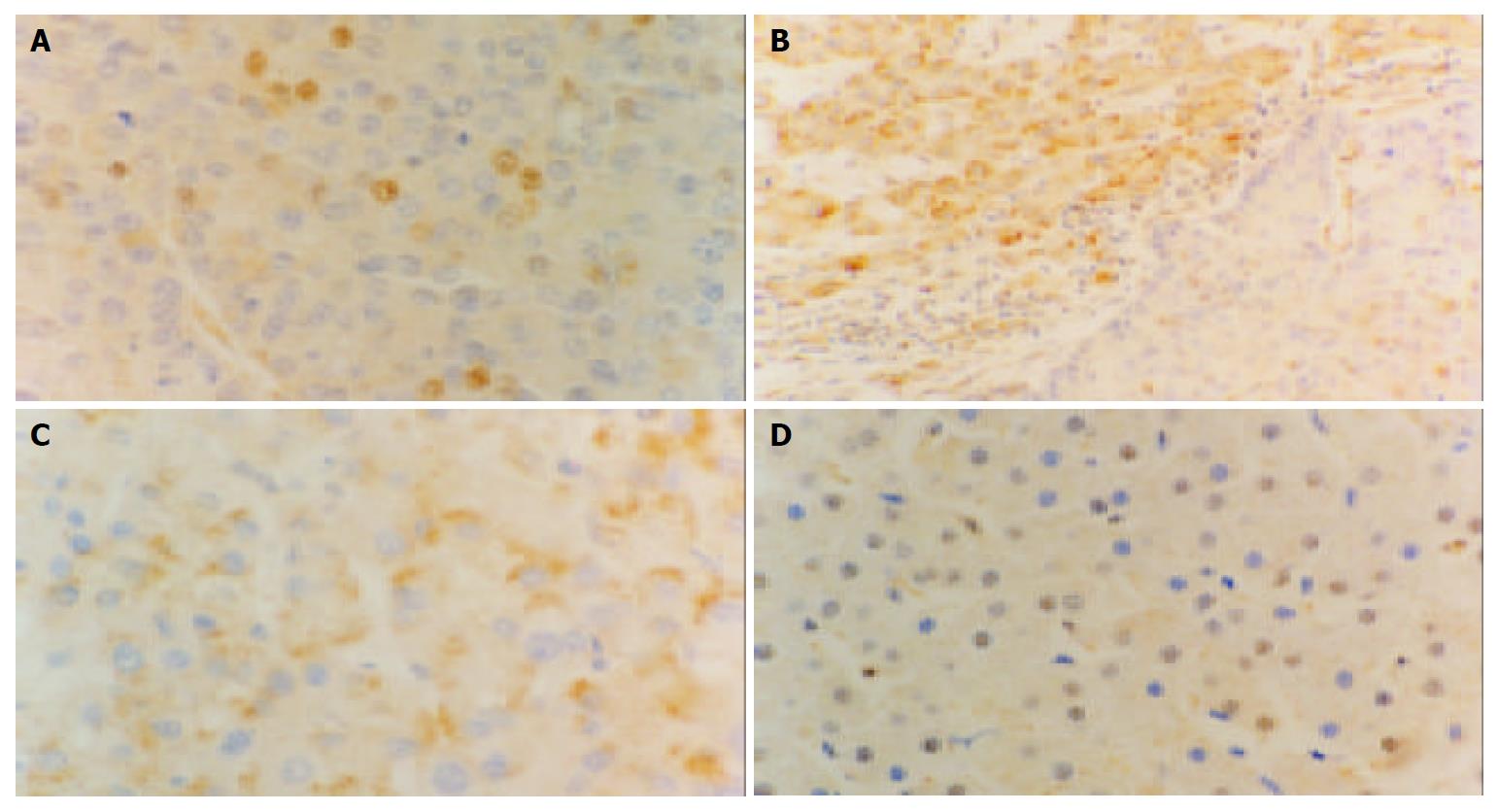 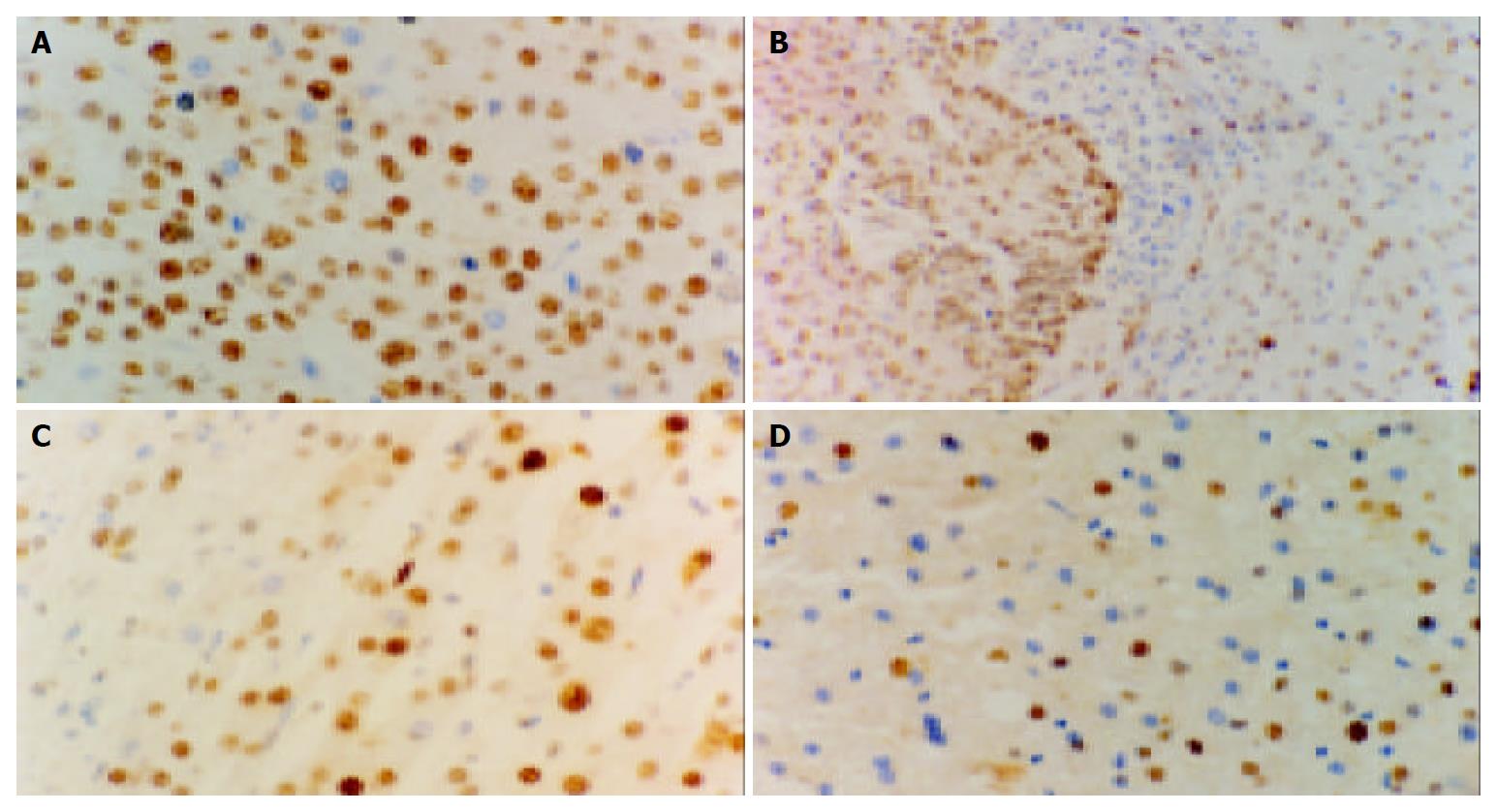 Expression of p27 and PCNA and survival

The survival rate of 6, 12, and 24 mo was 71.9%, 47.8%, and 25.1%, respectively. The patients were divided into 2 groups according to the median LI of p27, cytoplasmic p27, and PCNA. The survival analysis was performed on 32 patients and took into account for the following variables: age, gender, gross type, tumor size, UICC tumor stage, Edmondson’s grade, portal invasion, lymph node metastasis, depth of invasion, infiltration, p27 LI, cytoplasmic p27 LI, and PCNA LI. In univariate analysis, a significant correlation with short survival was found only for present portal invasion (P = 0.021) and low p27 expression (P = 0.033). The prognosis of patients with higher p27 LI was longer than that of patients with lower p27 LI (P = 0.0247, log-rank test, Figure 5). Multivariate analysis was performed by Cox proportional hazard regression model, age ≥ 45 years (P = 0.016) and low p27 expression (P = 0.009) were significantly associated with shorter survival. In addition, there was a trend of present lymphocyte metastasis (P = 0.05) and advanced stage (P = 0.08) correlated with poor prognosis (Table 3). For gross type, tumor size, Edmondson grade, depth of invasion, infiltration, cytoplasmic p27 LI, and PCNA LI, no significant correlations with overall survival were found.

Hepatocellular carcinoma is one of the most common malignant tumors in China, and the incidence of HCC has increased in recent years[26]. Cell proliferating activity is one of the prominent parameters for evaluating the biological aggressiveness of tumors. The study in cell proliferating status of HCC is very important for evaluating the biological aggressiveness[27,28], because distant and lymph node metastasis are not very common.

The protein p27 is an important member of CKI family. It regulates G1 progression by binding to and inhibiting cyclin/CDKs[29,30]. Loss or reduced expression of p27 has been found in a variety of human cancers and associated with more aggressive tumor behavior. The present study showed that p27 expression significantly decreased in HCC. The finding of p27 underexpression in HCC was similar to the previous reports[31]. This study showed that the expression of p27 in HCC was associated with gross type and direct liver invasion. Univariate analysis showed that portal invasion and p27 LI were related to survival in this study. In multivariate analysis, p27 expression was the strongest predictor of survival for HCC patients, which was independent of the other variables. Similar findings have also been observed in other cancers[32-34]. It is therefore suggested that p27 should work as a negative regulator during hepatocarcinogenesis and may exert a useful prognostic marker. Interestingly, as reported by Milde-Langosch[35], there was no correlation between p27 expression and proliferating level, indicating that reduced expression of p27 did not merely reflect high proliferating activity during tumor progression.

Although the mechanism responsible for the abnormal subcellular localization was not known, it may be due to loss of the tuberous sclerosis complex gene-2 (TSC2), the HER/Grb2/MAPK pathway which leads to nuclear export of p27[36], overexpression of cyclin D3 which contributes to retaining p27 in the cytoplasm[37], or PKB/Akt which phosphorylates p27 to impair its nuclear import[38-40].

In conclusion, our results suggest that underexpression of p27 can contribute to the development of HCC. Cytoplasmic displacement is an alternative mechanism of inactivating p27 that acts early during hepatocarcinogenesis. Furthmore, studies on a large number of cases will reveal the significance of p27 subcellular localization in hepatocarcinogenesis and its relationship with clinicopathologic and prognostic parameters.