METHODS: SGC-7901 cells were at first treated with different concentrations (25, 50, 100, 200 μmol/L) of c9, t11-CLA and 1 mL/L ethanol (as a negative control) for 24 h. Using adhesion assay and Western blot, we investigated the ability of SGC-7901 cells to adhere to intracellular matrix and examined the expression of E-cadherin (ECD), α-catenin, intercellular adhesion molecule 1 (ICAM-1) and vascular cell adhesion molecule 1 (VCAM-1) in these cells.

Conjugated linoleic acid (CLA) is a class of positional and stereoisomers of octadecadienoate (18:2) with conjugated double bonds. The predominant isomer in foods is the c9,t11-CLA isomer[9-16]. In 1979, Pariza et al[17] detected mutagenic inhibitory activity in both cooked and uncooked ground beef. Then in 1985, they observed that the crude extracts could protect rats against tumors[18]. In 1987, Ha et al[19] identified four isomers of CLA from cooked beef. In several animal models of chemical carcinogenesis, it has been reported that CLA was a potent cancer preventive agent. For example, CLA could inhibit skin papillomas[18,20], forestomach neoplasia[21-23], mammary tumors[24-30], and colon aberrant crypt foci[31]. Moreover, CLA was also effective in reducing the size and metastasis of transplanted human breast cancer cells and prostate cancer cells in SCID mice[32,33]. Several studies[34-43] suggested that CLA was cytostatic and cytotoxic to a variety of human cancer cells in vitro, including hepatoma, malignant melanoma, colorectal cancer, breast carcinoma, and gastric cancer.

c9,t11-CLA with 98% purity, was provided by Dr. Rui-Hai Liu at Food Science and Toxicology, Department of Food Science, Cornell University, Ithaca, NY, USA. The c9,t11-CLA was dissolved in ethanol, then diluted to the following concentrations: 25, 50, 100, and 200 μmol/L.

Cell adhesion assay A total of 96-well plates (Nunc. Co.) were incubated at 37 °C with laminin, fibronectin or Matrigel for 1 h and then blocked with phosphate-buffered saline (PBS) containing 100 g/L BSA at the same temperature for another 1 h. After exposed to different concentrations (25, 50, 100, and 200 μmol/L) of c9,t11-CLA for 24 h, the SGC-7901 cells were suspended in serum-free medium at a density of 8 × 105 cells/ml. Then, 0.1 mL of SGC-7901 cells suspension was added to each well and incubated at 37 °C for 1 h. The plates were washed three times with PBS to remove unattached cells. The remaining SGC-7901 cells in 96-well plates were reacted with MTT for 4 h at 37 °C, then solved with DMSO. The absorbance of each well was measured at 570 nm with an ELX800 microplate reader (Bio-TEK Co.). Results were expressed as the percentage of total cells assuming that the adhesion of cells in control was 100%.

As shown in Table 1, c9,t11-CLA could reduce the cell attachment to FN, LN or Matrigel in a dose dependent manner after SGC-7901 cells were pre-incubated for 24 h with different concentrations of c9,t11-CLA. 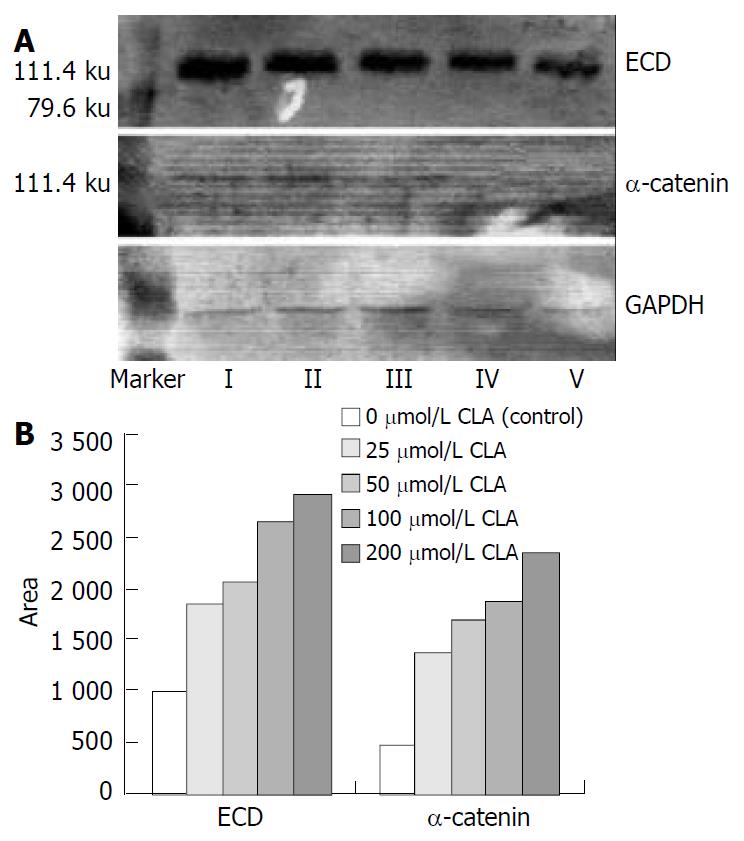 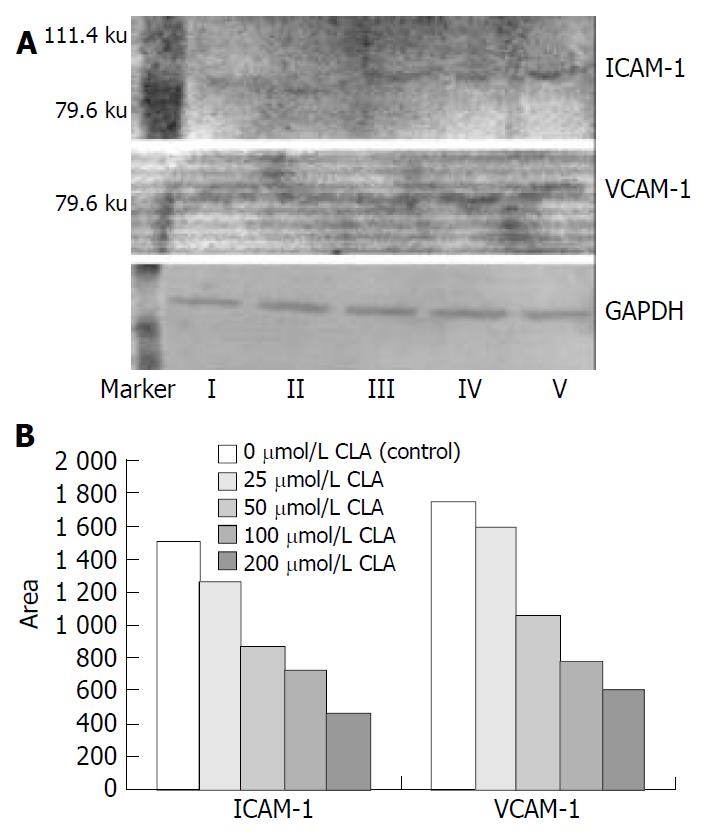 Many researches have indicated the importance of cancer cell-extracellular matrix (ECM) interaction in tumor metastasis. Cell and matrix interactions could promote cell migration, proliferation, and ECM degradation[47-51]. It also has been shown that prevention of tumor cell adhesion and migration is related to inhibition of tumor cell invasion into the basement membrane. Laminin (LN), fibronectin (FN) and type IV collagen are the principal components of ECM. The in vitro assays of FN, LN, or Matrigel that mainly contain FN, LN and type IV collagen can better simulate the in vivo adhesive process. It was shown that agents that inhibited cell attachment in vitro decreased the invasion and metastatic potential of tumor cells in vivo. Therefore, cell adhesion assay not only is employed in determining the adhesive interaction between tumor cells and matrix components, but also is suitable in screening agents that can inhibit adhesion and metastasis of tumor cell. We demonstrated in our current study that after incubation with 200, 100, and 50 μmol/L of c9,t11-CLA for 1 h, the attachment to extracellular matrix components of SGC-7901 cells was significantly reduced. The result was consistent with the findings in our previous study[44]. Therefore, we could conclude that c9,t11-CLA could inhibit the attachment to extracellular matrix components of tumor cells and this process might be a mechanism for the inhibition of tumor invasion.