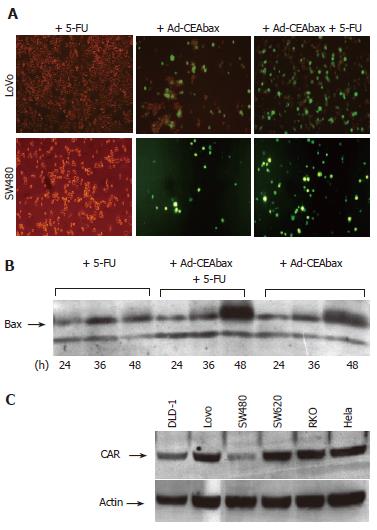 Figure 1 Effect of 5-FU on the adenoviral infection of colon carcinoma cell lines differing in CAR expression. The drug was used at the dose of 2 μmol/L for the Lovo cells and of 20 μmol/L for the SW480 cells. The virus (Ad-CEAbax) was used at 1 MOI. The cells were treated with 5-FU alone, or infected with the virus in the absence and in the presence of 5-FU (A). The expression of bax with 5-FU and/or the virus was controlled by western blot after 24 h, 36 h and 48 h incubation (B). The expression level of CAR on the colon carcinoma cells line was confirmed by western blot analysis (the expression of actin is reported as a control for loading) (C). 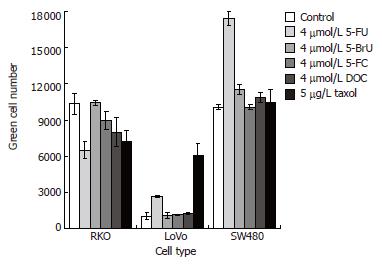 Figure 4 Other pyrimidine-based drugs do not show the positive effect of 5-FU on adenoviral infection. The colon carcinoma cell lines were treated concurrently with the virus Ad-GFP and 5-FU, 5-BrU, 5-FC, DOC or taxol, each at the indicated concentration. The number of the infected green cells was counted after 40 h infection. The reported data are the average of three experiments and the error bars indicate the standard deviation values. 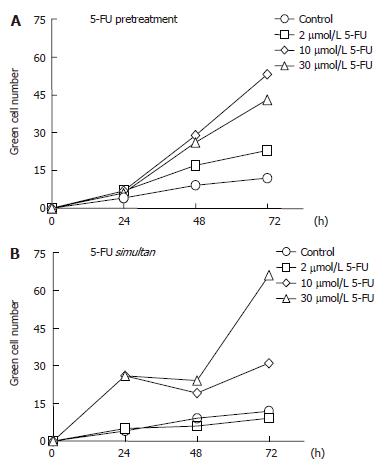 Figure 3 Dependence of adenoviral efficacy on the sequencing of 5-FU and virus administration to the SW480 cells. Two h postincubation with the drug at the indicated concentrations, the drug was removed and the cells were infected with the adenoviral construct Ad-GFP (A). Alternatively, the cells were infected with the virus in combination with 5-FU (B). The number of green cells was counted after 24, 48 and 72 h infection. The reported data points are the average of three experiments and the standard deviation values were in the range of 10%-15% (the error bars were not reported for clarity).

Figure 5 Increased release of viral particles from liposome-encapsulated adenoviral formulations. 293 cells were infected with the supernatant from centrifuged liposome-entrapped Ad-GFP solutions with and without 5-FU incubation. The number of the infected green cells was counted after 48 h and 72 h infection. The reported data are the average of three experiments and the error bars indicate the standard deviation values (A). On the other hand, the 5-FU treatment of liposome-encapsulated viral DNA did not lead to any DNA release, as confirmed by PCR analysis. Following samples (each loaded in duplicate) were separated by agarose gel electrophoresis: DNA alone (lanes 1 and 2), DNA and 9.6 μmol/L 5-FU (lanes 3 and 4), DNA and lipofectamine (lanes 5 and 6), DNA with lipofectamine and lysis buffer (lanes 7 and 8), DNA with lipofectamine and 5-FU 9.6 µmol/L (lanes 9 and 10) (B). EM images of liposomal preparations. (1) lipofectamine, (2) lipofectamine after treatment overnight with 5-FU, (3) Ad-GFP complexed with lipofectamine, (4) Ad-GFP complexed with lipofectamine after treatment overnight with 5-FU (C).