Gastrectomy is the optimal treatment for gastric cancer. Laparoscopic-assisted gastrectomy (LAG) has been extensively employed, while hand-assisted laparoscopic gastrectomy (HALG), which is similar to LAG, remains controversial. Although HALG is popular in China, some surgeons do not accept it as a minimal-access technique.

To assess the safety and practicability of HALG by comparing the short-term outcomes of HALG and LAG.

Compared with LAG, HALG is a simpler and safer technique. Additionally, HALG should be used as a minimal-access technique, especially in technologically undeveloped areas.

Core Tip: No consensus is available in the literature about which technique is more beneficial to the patients between hand-assisted laparoscopic gastrectomy (HALG) and laparoscopic-assisted gastrectomy (LAG). This is the first systematic review and meta-analysis comparing HALG and LAG. We compared these two techniques in terms of estimated surgery time, blood loss, retrieved lymphatic nodes, incision length, time to first flatus, hospitalization duration, and all postsurgical complications from selected randomized controlled trials. Compared with LAG, HALG is a simpler and safer technique.

Compared with laparoscopic-assisted or totally laparoscopic surgery, HALS retains the tactile sensation of the surgeon’s hand, which can make the operation faster and safer. Besides, it also has advantages of laparoscopy, such as being minimally invasive and having a zooming surgical field. For young surgeons, it also has the advantage of having a short-learning curve[7]. To date, HALG has formed the unique surgical approach called three-step HALG[8-10], which makes gastrectomy more convenient and simpler.

Recently, the number of studies on HALG is increasing. Although certain studies have compared HALG and LAG[11,12], controversy about its useful meaning still exists. Therefore, the present study conducted a systematic review and meta-analysis, with an aim to evaluate the safety and practicability of HALG, and compare the short-term outcomes of HALG and LAG.

EMBASE, PubMed, Cochrane Library, and China National Knowledge Infrastructure were searched for primary studies published up to August 2019. The search terms ‘hand-assisted laparoscopic’ and ‘gastrectomy’ and ‘gastric cancer’ were used in English and Chinese. Additionally, the references cited in retrieved articles were reviewed in order to select studies that better suit our criteria. Studies with only abstracts or unpublished reports were not included.

Two authors (Gan W and Liu LY) independently reviewed the search results. Any studies that met the following criteria were considered: (1) All patients were diagnosed with gastric cancer; (2) The study compared HALG and LAG; (3) It was a randomized controlled trial (RCT); and (4) The endpoints included postsurgical complications. If there were two or more articles by the same authors or research institutions, the one with larger sample size was selected.

To limit heterogeneity across the studies, the following exclusion criteria were used: (1) The study included totally laparoscopic or robotic radical gastrectomy; (2) It did not provide sufficient data to calculate the risk ratio (RR) ant its 95% confidence interval (CI) of different procedures for overall postsurgical complications; and (3) The article was an abstract presented at meetings, a case series, a cohort study, a review, or a letter.

All statistical analyses were performed using RevMan 5.3 software (The Nordic Cochrane Centre, The Cochrane Collaboration, 2014). For the meta-analysis, the results were presented as RR for dichotomous variables and weighted mean difference (WMD) for continuous variables. If the I2 value was ≤ 50%, a fixed effects model was employed, and if the value was > 50%, a random effects model was selected. Two-sided P < 0.05 was considered to indicate a statistically significant difference. χ2 test was used to evaluate statistical heterogeneity, and I2 statistic was calculated to evaluate the extent of variability attributable to statistical heterogeneity between trials. To assess the publication bias, a funnel plot was applied.

During the initial search, 126 publications were obtained from electronic databases. A total of 17 articles were reviewed in detail. Two studies derived from the same research institution[13,14]; thus, the biggest sample size study was selected[13]. Finally, five RCT studies were selected for the meta-analysis[13,15-18]. The details of the search strategy are shown in Figure 1. 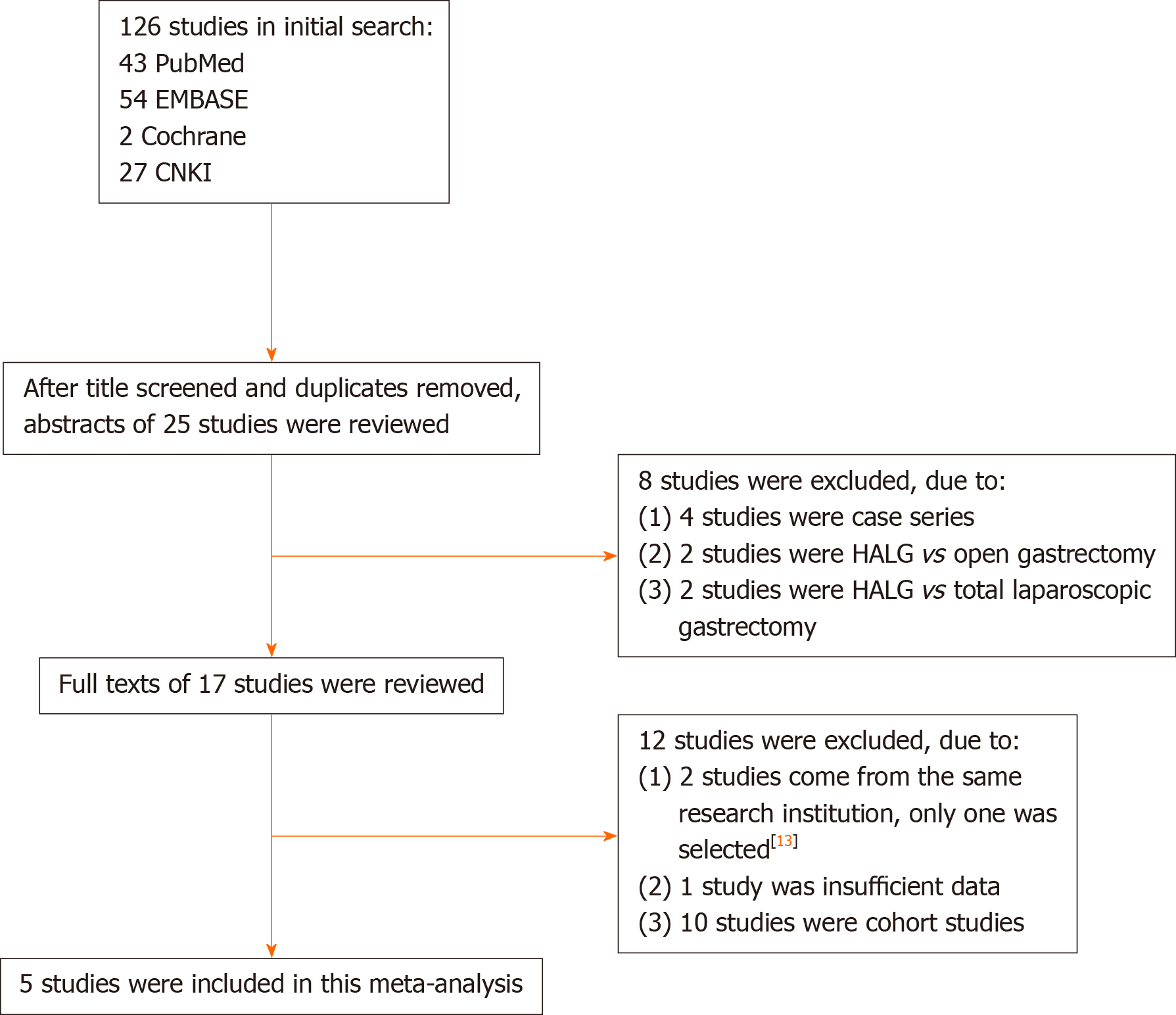 The Jadad scoring system was used to assess the quality of the selected RCT studies. Due to being open-label RCTs, those studies only scored 2 or 3 points (Table 2). It was known that operation was impossible to blind patients and surgeons. Thus, studies with a score ≥ 2 were classified as methodologically sound studies.

The funnel plot of overall postsurgical complications was used to examine the potential publication bias. Based on the approximate symmetry, there was no evidence of publication bias in this meta-analysis (Figure 3). 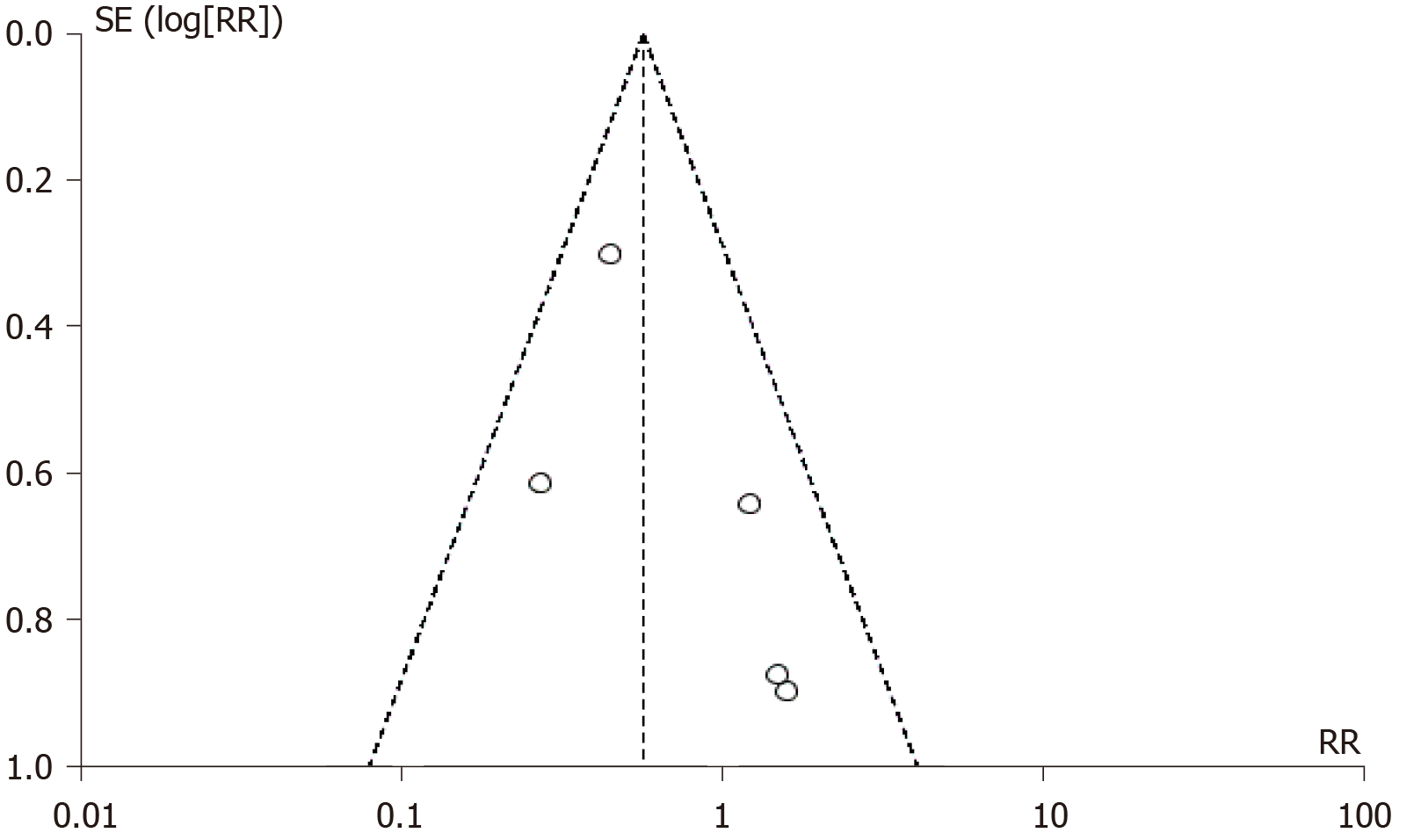 The therapeutic effect of LAG has been confirmed for gastric cancer in previous studies[19-21]. Likewise, several studies confirmed the therapeutic effect of HALS on gastrointestinal tumors[22-24]. There are numerous similarities between HALG and LAG, such as the use of laparoscopy, a small incision, and digestive reconstruction. However, they also differ in various aspects such as the surgical procedure and the function of incision. ‘Three-step HALG’ has become the standardized procedure in our hospital[8,25]. The application of HALG has been gradually increasing, especially in China. Nevertheless, due to the lack of consistency across different studies, controversy exists on the therapeutic effects and advantages of HALG. In this meta-analysis, in order to improve the reliability, we only included RCTs on HALG and LAG.

RCTs are the gold standard in study design; however, randomized controlled surgical trials, especially blinding, remain controversial, since the surgeon cannot be blinded to the procedure, and there are practical and ethical barriers to blind patients[26]. Due to the absence of blinding, five studies automatically scored poorly on the Jadad score in this meta-analysis. Although the poor-quality RCTs may be biased due to their inherent design limitations, there is no satisfactory program to resolve this issue. In addition, two of the studies did not report the exact value of the groups’ baseline[16,18], although they clearly reported that the groups were similar at the baseline in the article.

Previously, HALG has been considered the transitional bridge from traditional open surgery to laparoscopic surgery[27-29]. Currently, HALG is universally used for gastrointestinal tumors in China. However, most surgeons may prejudice HALG’s minimal invasiveness because of one hand into the abdominal cavity. In fact, several studies have shown that the important prognostic indicators of HALG, with the exception of incision length, are more advantageous than those of LAG[9,27,30-32]. Additionally, HALG should not be denied as being minimally invasive just because of slightly longer incision (WMD, 0.89 cm; 95%CI, 0.45 to 1.33). There are several possible reasons for this. First, HALG is simpler for isolating the omentum, and groups 5, 6, and 12 lymph nodes under direct vision through the upper abdomen incision, so that it can greatly reduce the laparoscopic operation time. Second, the surgeon’s left hand is more agile than that of the LAG’s assistant. Third, the initial learning-curve of HALG is shorter; thus, surgeons can better acquire the skill to decrease the operation time. Fourth, the incision length is appropriate for digestive reconstruction.

Severe postsurgical complications could increase the hospitalization duration and affect the prognosis. In this meta-analysis, the rates of all postsurgical complications of HALG were lower than those of LAG, which could be attributed to the following reasons: First, HALG have a clearer operative field to isolate groups 5, 6, and 12 lymph nodes, and to complete the digestive reconstruction by the comfortable incision. Second, due to the direct hand assistance, the important structures, particularly the splenic lymph node, could more intuitively be revealed via the laparoscope. Third, HALG has a lower requirement for pneumoperitoneum pressure, so that it favorably maintains the stability of the internal environment. However, those studies did not evaluate the long-term outcomes. Thus, it is important to evaluate the long-term survival of HALG in the future.

Nevertheless, this study has certain limitations. First, all the included studies were conducted in China, which limited the universal application of the results. Second, all the studies are RCTs, but there are no uniform criteria and no uniform training of surgeons. Due to the poor-quality RCTs, there is an indeterminate risk of bias. Third, although the present study included all the relevant publications from our search, the sample size is still not sufficient. Fourth, three types of gastrectomy were included in this meta-analysis, and the difference between these types is ignored, which may lead to high heterogeneity.

In conclusion, our meta-analysis suggests that HALG is a simpler and safer technique than LAG. HALG should be used as a minimal-access technique, particularly in technologically undeveloped areas. However, further high-quality RCTs with larger sample size should be conducted in order to evaluate this issue.

Hand-assisted laparoscopic gastrectomy (HALG) is a popular operation in China, but some surgeons do not accept it as a minimal-access technique.

If the safety and practicability of HALG can be confirmed by comparing with laparoscopic-assisted gastrectomy (LAG), HALG should be used as a minimal-access technique.

This research aimed to assess the safety and practicability of HALG by comparing the short-term outcomes of HALG and LAG.

HALG is simpler and safer technique than LAG. HALG should be used as a minimal-access technique, especially in technologically undeveloped areas.

It is important to evaluate the long-term survival of hand-assisted laparoscopic gastrectomy in the future.