Helicobacter pylori (H. pylori) infection occurs in almost half of the world's population, most of whom are merely carriers of this microorganism. H. pylori is shown to be detected more frequently in patients with diabetes mellitus (DM) than in the general population, which is accompanied by a significantly increased risk of developing H. pylori-associated diseases. In addition, eradication therapy shows a low efficiency for H. pylori infection in patients with DM. There is a relationship between the level of chronic hyperglycemia and a higher detection rate of H. pylori as well as a lower efficiency of eradication therapy in patients with DM. The exact mechanisms of these phenomena are unknown. The authors make a hypothesis that explains the relationship between chronic hyperglycemia and the increased detection rate of H. pylori, as well as the mechanisms contributing to the improved survival of this bacterium in patients with DM during eradication therapy.

Core Tip: The authors hypothesize that in patients with diabetes mellitus (DM), Helicobacter pylori (H. pylori) are most likely to rely on both amino acids and glucose for its vital activity. The hypothesis makes it possible to explain the high detection rate of H. pylori in patients with DM, as well as the lower efficiency of eradication therapy in them.

Forty years have passed since the description of Helicobacter pylori (H. pylori) as a pathogen in the development of atrophic gastritis and peptic ulcer disease[1-3]. It has been shown that H. pylori infection occurs in almost half of the population in the world, most of whom are merely carriers of this microorganism[4,5]. In addition, many researchers have indicated that H. pylori are detected more frequently in patients with diabetes mellitus (DM) than in the general population[6-11]. This is accompanied by a substantial increase in the risk of developing H. pylori-associated diseases[6,11,12]. At the same time, there are studies which report reverse results about the incidence of type 2 DM (T2DM) in H. pylori-positive patients[13-15]. However, the relationship between H. pylori infection and the risk of developing T2DM remains controversial and ambiguous. Hence, a prospective cohort study by Jeon et al[16] has shown that H. pylori infection correlates with a high risk of T2DM. Similarly, a meta-analysis carried out by Mansori et al[11] suggests that H. pylori may be one of the risk factors for T2DM. On the contrary, other studies report that H. pylori is not associated with either insulin resistance or the prevalence of T2DM[17-20]. Data from Tamura et al[21] suggest that East Asian CagA-positive H. pylori infection is not a risk factor for T2DM. The successful H. pylori eradication rates in patients with type 1 and type 2 DM are 62% and 50%, respectively, which are much lower than those in people without these two forms of the disease[22-25]. The low efficiency of eradication therapy for H. pylori infection in diabetic patients is uniquely presented in many studies[26-29].

It is hypothesized that chronic hyperglycemia is associated with: (1) The increased detection rate of H. pylori; (2) possible metabolic changes in the bacterial cells ; and (3) the results of eradication therapy.

It is well known that H. pylori colonizes the gastric mucosa. To establish long-term colonization, the bacterium must sense and adapt to the nutritional conditions that exist in its habitat. Surprisingly, little attention has been paid to the preferred sources of nutrients and energy for the life, growth, and reproduction of H. pylori, as well as changes in the source of food ingredients and energy for H. pylori in diabetic patients. The available data suggest that for its life, growth, and reproduction, H. pylori utilizes amino acids and carboxylic acids, which are produced in sufficient quantities in the stomach as a result of hydrolysis of food proteins[32-34]. H. pylori catabolize a large amount of amino acids with the most substantial being alanine, arginine, asparagine, aspartate, glutamate, glutamine, proline, and serine[32,35-37]. H. pylori can also catabolize fumaric acid[38], malic acid[35], and lactic acid[39]. Thus, amino acids and carboxylic acids are sources of carbon, nitrogen, and energy.

In a healthy individual, H. pylori are almost independent of sugars, such as glucose[32-34]. However, glucose is known to be one of the most important carbohydrates, which is used for life by many microorganisms, including inhabitants in the digestive system. Moreover, Wang et al[40] believe that glucose plays a key role in the outcome of bacterial infection in humans. A question is raised as to whether H. pylori can utilize glucose as a plastic and energy material. Studies conducted in the 1990s and later indicate that H. pylori has enzyme systems capable of utilizing carbohydrates, D-glucose in particular[41-43]. These data suggest that in its evolutionary phylogenetic development and adaptation to life and reproduction in the stomach, H. pylori not only acquire the ability to restructure its metabolism for the use of amino acids as a plastic and energy material, but most probably retain the ability to utilize carbohydrates for their life activity. There are experimental data showing that adding glucose to the nutrient medium when growing H. pylori, enhances its growth[29,44].

Based on this hypothesis, it is possible to explain also the lower efficiency of eradication therapy in patients with DM.

H. pylori eradication regimens contain antibacterial drugs (clarithromycin, metronidazole, bismuths, etc.) and agents that reduce hydrochloric acid production. The use of antacids aimed at creating optimal conditions for acid-dependent antibacterial agents[45-48]. The data presented in recent studies suggest that it is extremely important to determine gastric pH for H. pylori eradication[45,46]. In addition, the antacids have a double effect on H. pylori with an opposite effect. Increased gastric pH is a favorable factor for the vital activity of H. pylori. But at the same time, the antacids deprive H. pylori of nutrients. Exposure to hydrochloric acid in the stomach causes denaturation of food proteins and initiates their hydrolysis by the gastric juice enzymes pepsin and gastrixin. This gives rise to oligopeptides with different lengths and to a certain amount of amino acids, which are utilized by H. pylori for its life activity. Taking antacids practically does not lead to denaturation of food proteins. Consequently, the rate of protein hydrolysis is considerably reduced. As a result, the stomach practically does not produce amino acids that are essential for maintaining the vital activity of H. pylori. The lack of nutrients and the intake of antibacterial drugs result in the death of the microorganism or in its transition to a dormant form[49]. The latter is rare during powerful antibiotic therapy. 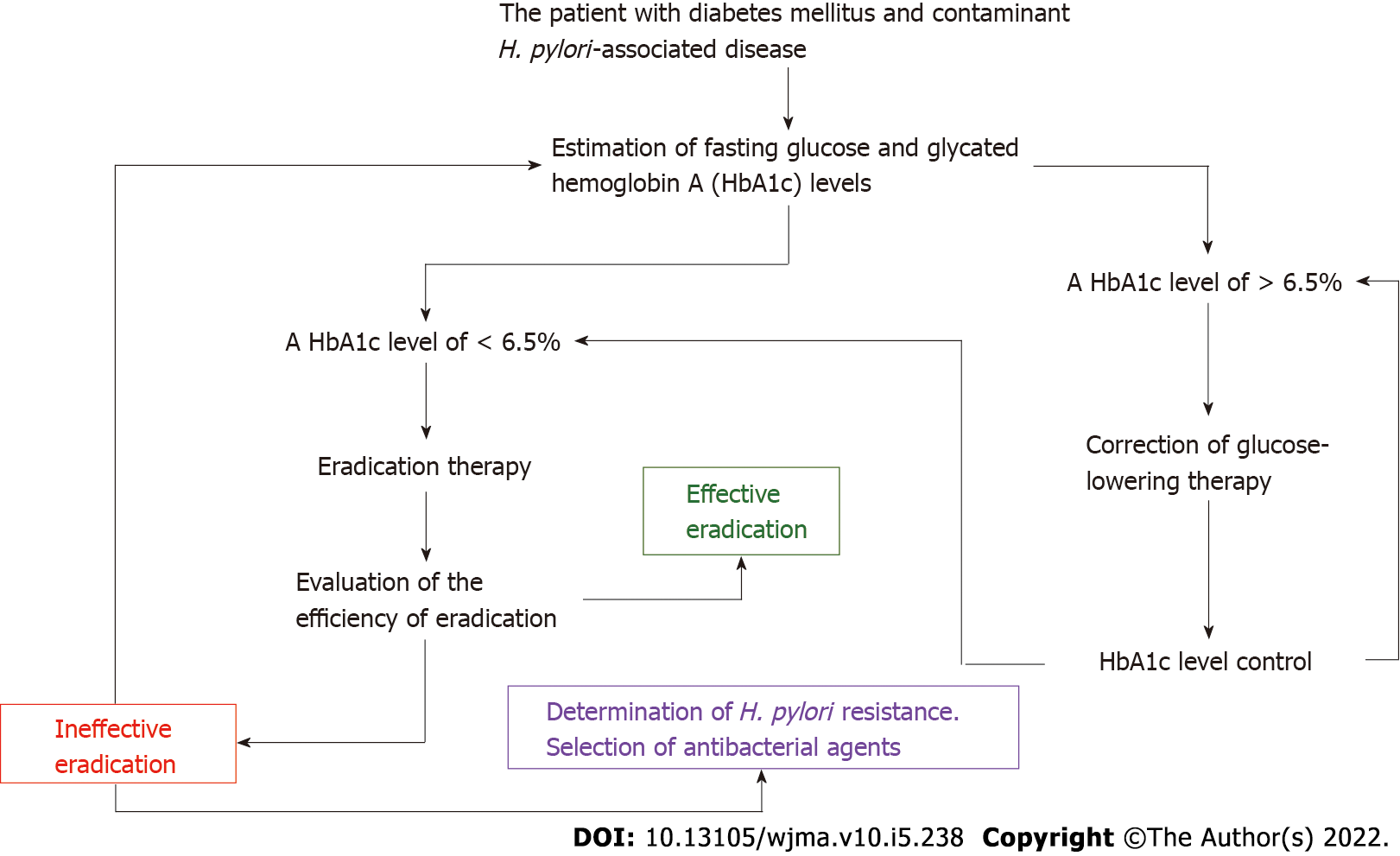 Bektemirova et al[58] used the HbA1c level to evaluate the efficacy of hypoglycemic drugs taken by 83 patients with T2DM and H. pylori-associated diseases during eradication therapy. Glycated hemoglobin A was shown to reach a target level of < 6.5% in 62 of the 83 examinees, while it remained elevated (> 7.0%) in 21 patients. This means that despite the use of hypoglycemic drugs, the level of hyperglycemia persisted in these patients for at least 2-3 mo. And it was in these patients who did not reach the target HbA1c level had a significantly (P < 0.017) lower efficiency of eradication therapy than those who achieved the target level of HbA1c < 6.5%. The data obtained by Bektemirova et al[58] indirectly suggest that H. pylori most likely take advantage of chronic hyperglycemia to survive under the extreme conditions of eradication.

The data available in the literature advance the following hypothesis that in diabetic patients, H. pylori are most likely to utilize both amino acids and glucose for its vital activity. The hypothesis makes it possible to explain the high detection rate of H. pylori in diabetic patients, as well as their lower eradication therapy efficiency. Undoubtedly, this hypothesis requires further conformations by biochemical, microbiological, molecular genetics, and other studies. Further multicenter studies are needed to confirm this hypothesis. But if this hypothesis is correct, then before H. pylori are eradicated in DM patients, there is a need for mandatory monitoring and targeted correction of blood glucose and HbA1c levels according to the algorithm given in Figure 1. The algorithm can be used for the management of patients with DM and concomitant H. pylori-associated diseases, which is of great practical importance for their successful eradication therapy.

The authors express their gratitude to Alexandr Igorevich Burmistrov for technical assistance in preparing this article.