AIM: To determine the prevalence of hypertension in the urban and rural population of India.

METHODS: Relevant studies were identified through computer based and manual searches using MEDLINE/ PubMed, Google scholar, EMBASE, Cochrane Library and reference lists of prevalence studies from January 2000 to June 2012. A total of 12 studies were included in the meta-analysis of hypertension in urban India and 10 studies in the analysis of hypertension in rural India after applying the inclusion and exclusion criteria. Estimates of prevalence were calculated using the random effect model for meta-analysis.

CONCLUSION: Current evidence suggests that policies and interventions should be prioritized for reduction of hypertension in the adult Indian population, especially the urban population.

Globally, the overall prevalence of hypertension or raised blood pressure in adults aged 25 and above was around 40% in 2008[1]. Worldwide, hypertension is estimated to cause 7.5 million deaths, about 12.8% of the total deaths. Hypertension accounts for 57 million disability adjusted life years (DALYS) or 3.7% of total DALYS[1]. The World Health Organization (WHO) has estimated that globally about 62% of cerebrovascular diseases and 49% of ischemic heart diseases are attributable to suboptimal blood pressure (systolic > 115 mmHg), with little variation by sex[2]. One in three adults worldwide has high blood pressure. Hypertension increases the risk of heart attack, stroke, kidney failure and many other associated co morbidities. Treating raised blood pressure and maintaining it below 140/90 mmHg is associated with a reduction in cardiovascular complications[1].

The theme for World Health Day (WHD) 2013 is “high blood pressure”[3]. The goal of WHD 2013 is to reduce heart attacks and strokes. Keeping in line with the WHO-Government of India Country Cooperation Strategy, the WHD 2013 events in India are aimed at raising the awareness amongst national policymakers, program managers and other stakeholders on the need to strengthen the Indian health system to make it competent enough to respond to hypertension and related co morbidities[3].

Hypertension is a controllable disease and it has been reported that targeted reductions in people with hypertension are expected to produce large reductions in the burden of cardiovascular disease[4]. According to the seventh report of the Joint National Committee (JNC-7) on prevention, detection, evaluation and treatment of high blood pressure, adoption of healthy lifestyles by all individuals is critical for the prevention of high blood pressure[5]. Accurate estimates of hypertension are therefore necessary to plan effective control measures.

India accounts for 17% of the world’s population, the second largest in the world, and hence it contributes largely to the statistics of any disease in the world[7]. Given the fact that hypertension is on the rise in developing countries like India, this meta-analysis was designed to consolidate the available data to find out the current prevalence of hypertension in urban and rural India.

We searched MEDLINE/PubMed, Google scholar, EMBASE, Cochrane Library and reference lists of prevalence studies from January 2000 to June 2012. Internet searches used permutations of medical subject headings for prevalence studies on hypertension in India. The following keywords were looked for individually or in association: hypertension, India, prevalence, blood pressure, systolic, diastolic, mmHg. The limits included were: English for the language category and humans for the study category (Figure 1). 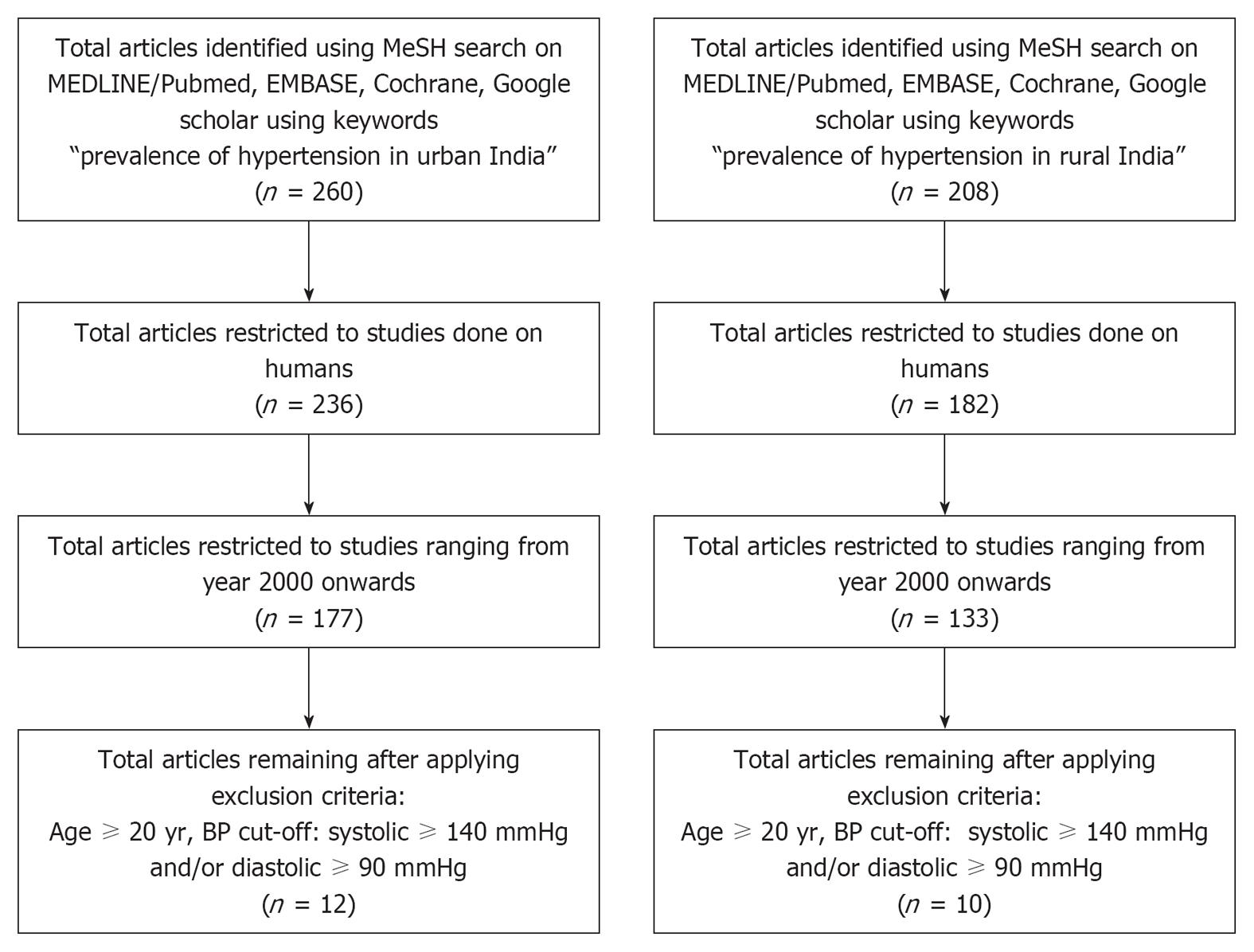 The studies that met all of the following criteria were included in the present meta-analysis: (1) they were prevalence studies; (2) the study design was cross-sectional; (3) the age group included in the study was 20 years and above; (4) the study was conducted in the Indian population; (5) the cut-off for classification of hypertension was systolic blood pressure ≥ 140 mmHg and/or diastolic blood pressure ≥ 90 mmHg; and (6) the study contained original data. All the studies had a cross-sectional design and blood pressure measurement on a single visit was considered. Exclusion criteria: reviews, letters to editors, case series and case-control studies were not included because of insufficient data for analysis. 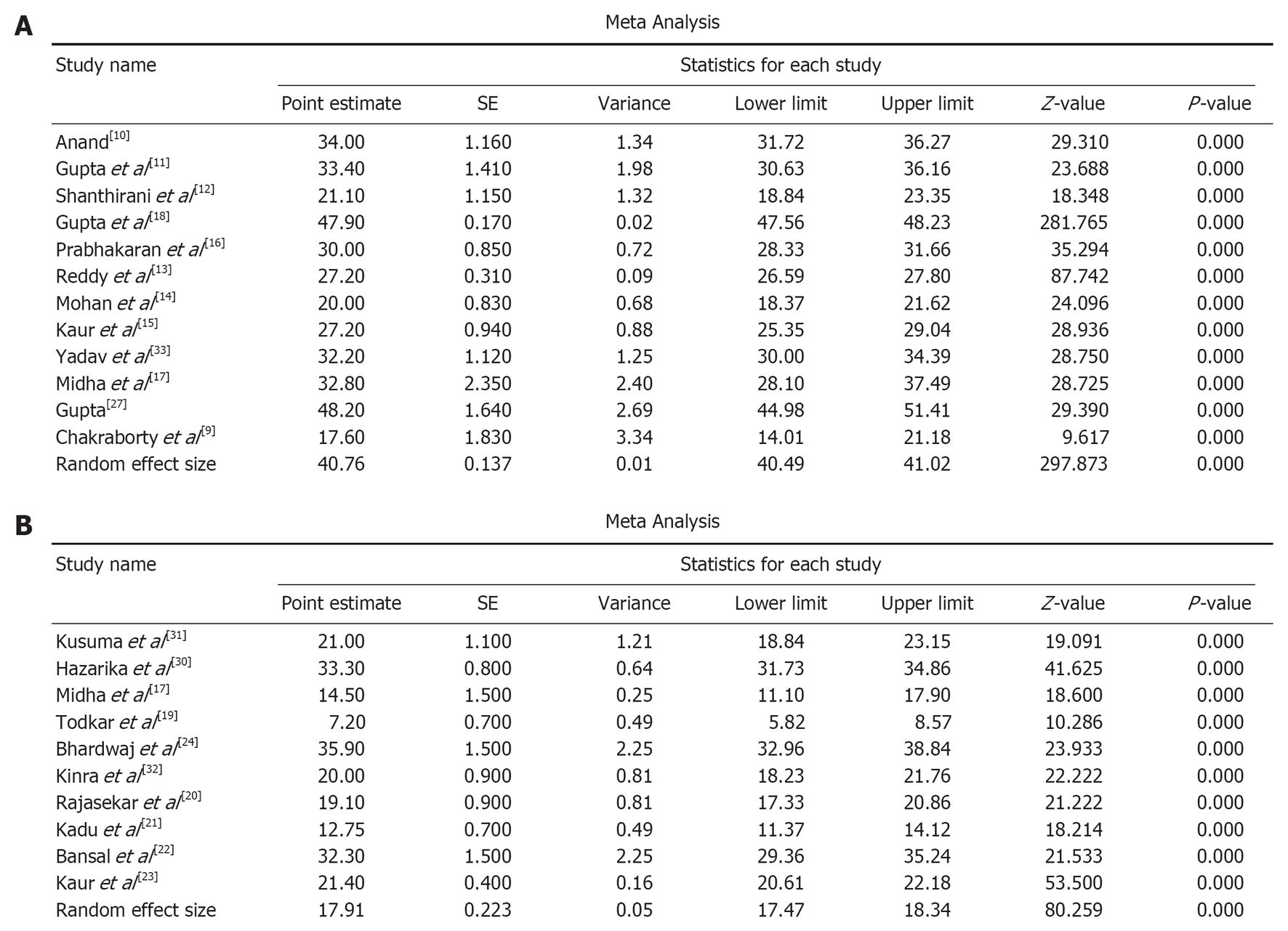 Yadav et al[33] observed that there was a high prevalence of cardiovascular risk factors in the general population [central obesity (86.7%), elevated LDL cholesterol (22.8%), abnormal glucose tolerance (41.6%) and smoking (20.3% of males)]. Two or more of the cardiovascular risk factors were present in a higher proportion of hypertensives (66%, OR = 3.0, P < 0.0001) and pre-hypertensives, (56%, OR = 2.0, P < 0.0001) compared to normotensive subjects (39%). The current rate of hypertension in the urban areas and the rising trend in the rural population is a warning to institute lifestyle changes in the community in order to put a halt to the increasing rates.

The high prevalence of hypertension in the urban and rural population in India presents a formidable challenge to the Indian health system. In countries like India, the out-of-pocket expenditures incurred for non-communicable diseases (NCDs) like hypertension are high, which hits the impoverished households the most. Medicines for these chronic diseases account for a large portion of expenditure. Therefore, population based prevention strategies have a high impact and are cost-effective as these target lifestyle change. Interventions utilizing the power of public policies for reducing salt, fat, sugar and alcohol intake through regulatory and consumer education approaches; increasing physical activity through sound urban planning and creation of activity-promoting environments; increasing fruit and vegetable intake through appropriate agricultural and pricing mechanisms; and implementing comprehensive tobacco control have the potential to prevent a large proportion of disease events in the whole population[34].

Hypertension is easily diagnosable and treatable with lifestyle modifications and effective medicines. Furthermore, hypertension control provides an entry point to deal with other NCDs as any intervention will help to concomitantly address other NCDs as well. This has been taken into cognizance in the newly launched National Programme for Prevention and Control of Cancer, Diabetes, Cardiovascular Diseases and Stroke (NPCDCS), which has hypertension and diabetes as the main focus areas[34]. National strategies will focus on prevention and health promotion as the key to reduce disease burden. Health education programs that promote exercise, weight reduction, early diagnosis and screening are some of the key interventions that will be promoted at various levels of heath facilities[35]. Under the NPCDCS, the strategy for early diagnosis of chronic NCDs will consist of opportunistic screening of persons above the age of 30 years at the point of primary contact with any health care facility[35]. The NCD clinics mandated under NPCDCS could be leveraged to facilitate guidelines based hypertension management with emphasis on generic drugs and those recommended by the Indian Public Health Standards[34].

In conclusion, the high prevalence of hypertension in the urban population and a rising prevalence in the rural population must raise an alarm for policy makers and health care professionals as this is an area where primordial and primary prevention measures can bring about a substantial reduction in cardiovascular morbidity and mortality in the future.

Given the limited amount of data available on the prevalence of hypertension in India, studies conducted in subjects with different bio-social characteristics have been included in the meta-analysis. Nevertheless, the pooled estimate does provide an overview of the magnitude of the problem of hypertension in the Indian population.

The overall prevalence of hypertension in adults aged 25 and over was around 40% in the world in 2008 and a meta-analysis estimated a prevalence of 10-30.9% in India in 2002. This shift in epidemiological profile presents a unique challenge to India’s health system as rates of cardiovascular and metabolic disease like hypertension and diabetes, obesity and cancer rise, tuberculosis, diarrheal disease and water borne illnesses remain widespread. According to a 2012 World Health Organization report, non communicable diseases are responsible for two-thirds of the total morbidity burden and about 53% of total deaths in India. Hypertension provides an entry point to other non-communicable diseases. Therefore, a precise estimate of the prevalence of hypertension in the urban and rural population of the India is required to assess the magnitude of the problem that has to be addressed.

Very few studies are available on the prevalence of hypertension in India. A consolidated estimate of hypertension from various studies conducted in different regions of the country can aid the development of preventive strategies. The difference in prevalence between the urban and rural population has also been studied to provide an insight to the kind of preventive and promotive services required.

It is possible that an insight into the magnitude of the problem of hypertension can help in shaping the preventive programs and policies specific for the rural and urban population.

Very few multi-centric studies are available in India; therefore, the main application of this meta-analysis is to consolidate the available data to determine the burden of hypertension in country.

A meta-analysis integrates the quantitative findings from separate but similar studies and provides a numerical estimate of the overall effect of interest. Different weights are assigned to the different studies for calculating the summary or pooled effect. The weighting is related with the inverse of the standard error (and therefore indirectly to the sample size) reported in the studies. Studies with smaller standard error and larger sample size are given more weight in the calculation of the pooled effect size. The meta-analysis table lists the prevalence of hypertension (expressed as a percentage), with their 95%CI found in the individual studies included in the meta-analysis. The pooled proportion (prevalence) with 95%CI is given for the random effects model. The random effects model will tend to give a more conservative estimate (i.e., with wider confidence interval), but the results are more valid as they take into account any inherent heterogeneity. Under the random effects model, the true effects in the studies are assumed to vary between studies and the summary effect is the weighted average of the effects reported in the different studies.

This manuscript is a meta-analysis on the prevalence of hypertension in India. Its results have provided evidence for policies and interventions for hypertension. It is well written.