AIM: To evaluate the benefits of low-volume polyethylene glycol (PEG) with ascorbic acid compared to full-dose PEG for colonoscopy preparation.

METHODS: MEDLINE, Cochrane Central Register of Controlled Trials and Database of Systematic Reviews, CINAHL, PubMed, and recent abstracts from major conferences were searched (January 2012). Only randomized-controlled trials on adult subjects comparing low-volume PEG (2 L) with ascorbic acid vs full-dose PEG (3 or 4 L) were included. Meta-analysis for the efficacy of low-volume PEG with ascorbic acid and full-dose PEG were analyzed by calculating pooled estimates of number of satisfactory bowel preparations as well as adverse patient events (abdominal pain, nausea, vomiting). Separate analyses were performed for each main outcome by using OR with fixed and random effects models. Heterogeneity was assessed by calculating the I2 measure of inconsistency. RevMan 5.1 was utilized for statistical analysis.

CONCLUSION: Low-volume PEG with the addition of ascorbic acid demonstrates no statistically significant difference to full-dose PEG for satisfactory bowel preparation and side-effects.

Colorectal cancer (CRC) is the third-leading cause of cancer and second-leading cause of cancer-related deaths in the United States[1]. In 2012, it is estimated that 143460 new cases of CRC will be diagnosed and 51690 deaths will occur secondary to this disease[1]. Given these estimations, it has become increasingly important to screen for and prevent CRC, ideally detecting the disease in an early stage. Colonoscopy has become a widely available screening test for both preventing and detecting CRC and has been recommended as the preferred CRC prevention test by the American College of Gastroenterology (ACG)[2]. Furthermore, colonoscopy is an important tool in the work-up and management of various other conditions including inflammatory bowel disease, lower-gastrointestinal bleeding, and diarrhea[3-6].

To provide optimal visualization of the colonic mucosa during exam, colonoscopy is dependent on an adequate bowel preparation[7,8]. In order to accomplish this, patients are asked to drink, at times, large volumes of colon preparation solutions[9-11]. This large amount of oral intake prior to a colonoscopy can lead to patient discomfort, nausea, vomiting, and poor patient compliance, which, in turn, leads to a poor colon preparation and increased potential for missed lesions and need for repeat colonoscopy[12-14].

A three-stage search method was utilized to maximize search results. First, a comprehensive search was performed in MEDLINE, Cochrane Central Register of Controlled Trials and Database of Systematic Reviews, CINAHL, PubMed in January 2012. Second, references of the retrieved articles and reviews were manually searched for any additional articles. Third, a manual search of abstracts submitted to the Digestive Disease Week and the ACG national meetings was performed from 2003-2011. All articles were searched irrespective of language, publication status (articles or abstracts), or results. The search terms used were PEG and ascorbic acid. Only randomized-controlled trials on adult subjects that compared low-volume PEG (2 L) with ascorbic acid vs full-dose PEG (3 or 4 L) were included. Standard forms were used to extract data by two independent reviewers. Each study was evaluated by a Jadad score[28] and criteria based on Jüni et al[29] to assess the quality of the study.

A meta-analysis was performed comparing the efficacy of low-volume PEG with ascorbic acid and full-dose PEG by calculating pooled estimates of number of satisfactory bowel preparations as well as adverse patient events including abdominal pain, nausea, and vomiting. Separate analyses were performed for each main outcome by using OR with fixed and random effects models which was considered significant if P < 0.05 and 95%CI does not include 1. Heterogeneity among studies was assessed by calculating I² measure of inconsistency which was considered significant if P < 0.10 or I2 > 50%. If heterogeneity was statistically significant, a study elimination analysis was utilized to examine for heterogeneity when certain studies were excluded from the analysis. RevMan 5.1 was utilized for statistical analysis. Publication bias was assessed by funnel plots.

The initial search identified 242 articles and trials (Figure 1). Nine studies satisfied the inclusion criteria (n = 2911) with a mean age range from 53.0 to 59.6 years. Table 1 shows a summary of the details for each study including the low-volume and full-dose preparations. All studies used 2 L PEG with ascorbic acid vs 3 or 4 L PEG solutions. 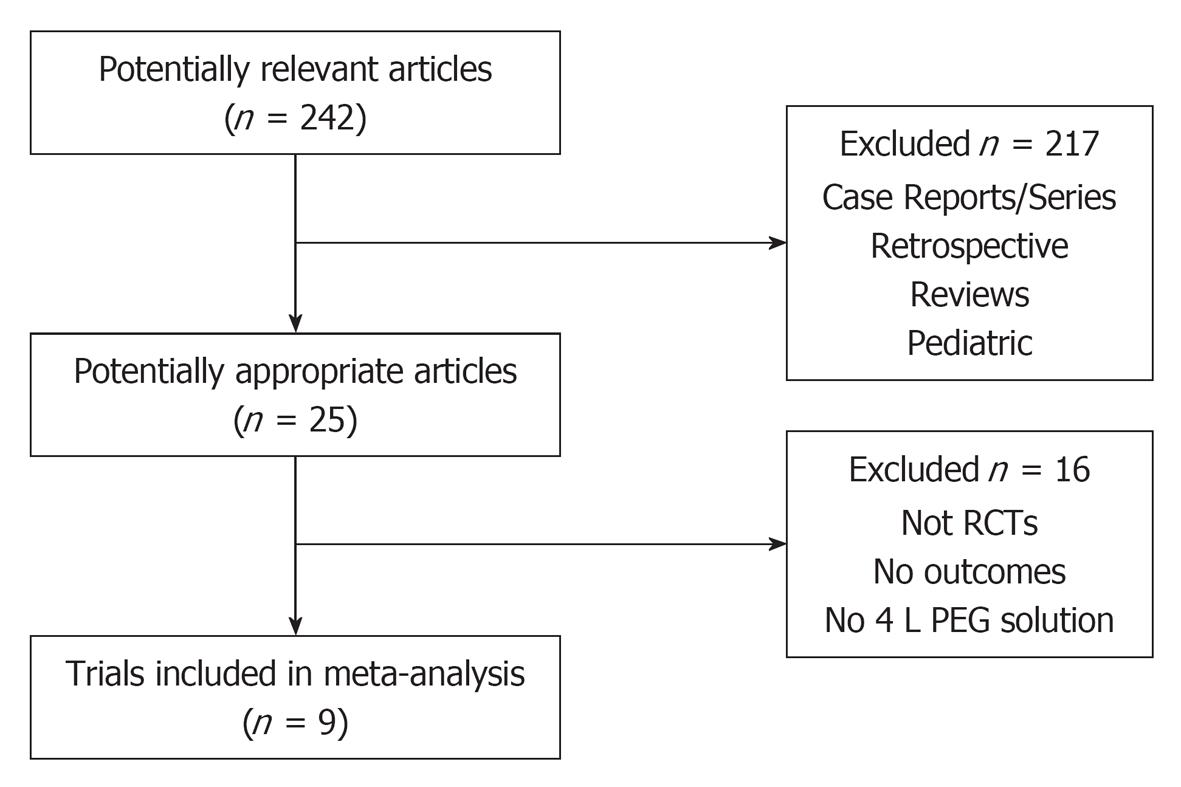 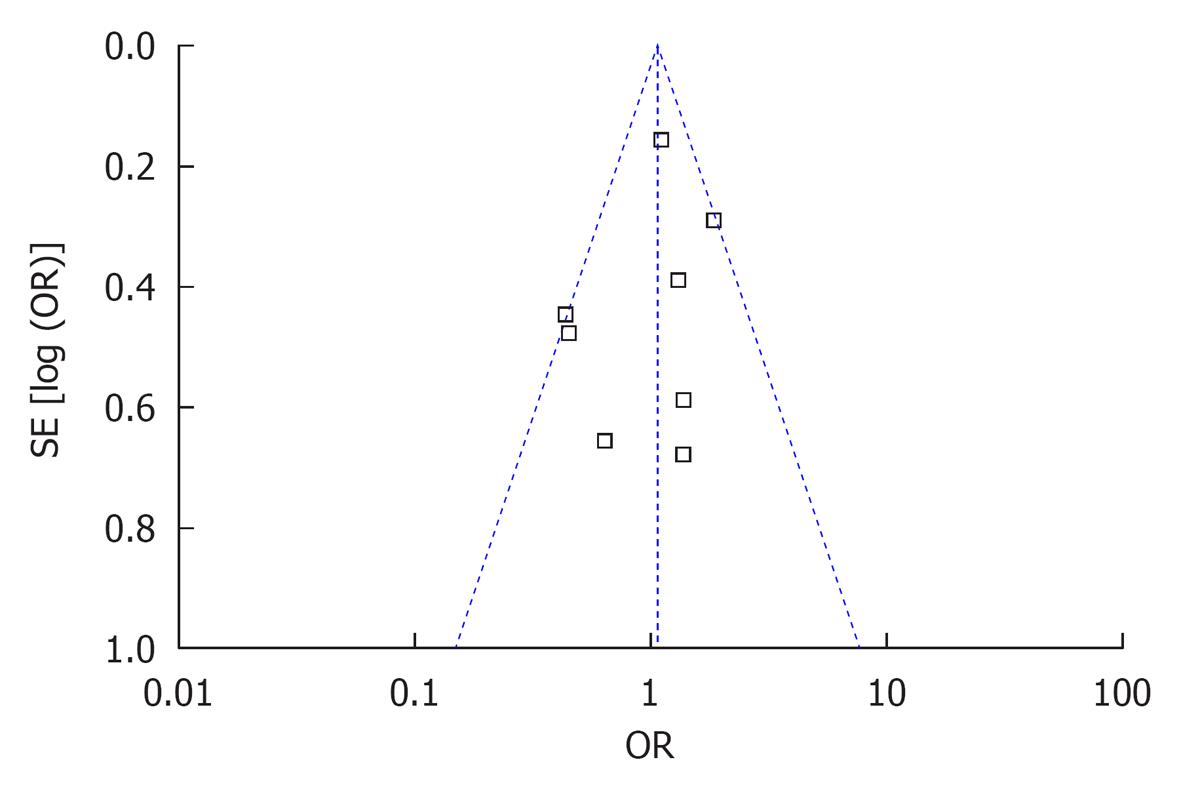 Colonoscopy is a widely available and highly useful diagnostic tool for evaluating colonic and terminal ileal disease. Its success largely depends on an adequate bowel preparation to allow a thorough examination of the colonic and ileal mucosa. Various bowel preparations have been developed over the years under the premise that an ideal bowel preparation is one that is palatable to the patient, effective in cleansing quality, relatively small in volume, and tolerated well by patients with minimal adverse gastrointestinal symptoms.

One of the most commonly used bowel preparations has been 4 L of PEG solution. While effective, it requires the patient to consume a large amount of volume over a short period of time, resulting in some that are unable to tolerate the preparation. Due to this large volume, several recent studies, including a meta-analysis, have evaluated the effectiveness of administering the PEG solution in a split-dose with half given the evening before and half given the morning of the procedure[30]. While this study showed an improvement in bowel cleansing and decrease in some gastrointestinal side effects, patients still need to consume 4 L of PEG solution. Other studies have used lower-volume 2 L PEG solutions with various adjuncts including senna, bisacodyl, or magnesium citrate. These studies showed an improvement in tolerability but suggested a decrease in efficacy[16-18]. More recently, several studies have been conducted to evaluate the effectiveness and tolerability of a low-volume 2 L PEG solution with ascorbic acid as compared to full-dose 4 L PEG. These studies suggested that the reduced volume solution is effective in bowel cleansing but may not offer any advantages in reducing potential gastrointestinal side-effects.

The strengths of our meta-analysis include the use of RCTs in various populations and end-points that are significant to clinical practice. This also represents the first meta-analysis performed on this subject. However, a few limitations to this meta-analysis do exist. First, uniformity between the studies in using only 2 L PEG with ascorbic acid and full-dose PEG solution was not consistent among all studies. González-Méndez et al[25] used a 3 L PEG solution rather than the typical 4 L PEG solution. This could alter the results as patients ingested an equal volume of liquid (3 L) in both groups. However, if this study was eliminated, the overall results were similar (Satisfactory prep: OR 1.04, 95%CI: 0.75-1.43, P = 0.82). Additionally, a few studies utilized other adjuncts such as bisacodyl[25] and simethicone[19,21]. Given that simethicone is not a laxative, its addition in these studies likely had little impact on the quality of bowel cleansing. However, although bisacodyl is a laxative, it was given to both arms of the study, negating its overall effect. Second, a limited number of studies were used in this meta-analysis; however, all studies to-date were included in this meta-analysis using an extensive search protocol. Third, the quality of the studies was not ideal. As in most bowel preparation studies, it is very difficult to blind the patient. Therefore, these RCT’s were single-blinded to the colonoscopist, which is the optimal format for these studies. Also, three of the studies were abstracts with no data regarding method of randomization or blinding, leading to a lower Jadad score. However, these abstract studies were single-blinded randomized trials and due to word limits on abstracts, may not have presented their randomization and blinding techniques, which does not make them any less quality than other bowel prep studies. Finally, slightly different bowel prep rating systems were utilized among studies. However, all studies specifically defined satisfactory or unsatisfactory bowel preparations based upon their specific scale.

Colorectal cancer (CRC) is a major cause of cancer-related deaths worldwide. Colonoscopy has become a widely available screening test for both preventing and detecting CRC. However, colonoscopy requires an adequate bowel preparation for complete visualization which may induce unwanted side effects and patient discomfort.

The low-volume 2 L PEG solution with ascorbic acid can be considered as an appropriate and equally effective bowel preparation prior to colonoscopy but does not appear to offer any advantage over the traditional 4 L PEG solution.

PEG is a common bowel cleansing solution that was first introduced in 1980. Standard bowel preparation using PEG typically involves ingestion of 4 L of solution prior to colonoscopy.

This is an interesting study, and a well written paper.