Immunosuppressive drug level monitoring and serum creatinine are widely used for kidney transplantation (KT) monitoring. Monitoring of drug level is not the direct measurement of the immune response while the rising of creatinine is too late for detection of allograft injury. Kidney biopsy, the gold standard for KT monitoring, is invasive and may lead to complications. Many biomarkers have been discovered for direct monitoring of the immune system in KT and the benefit of some biomarkers has reached clinical level. In order to use biomarkers for KT monitoring, physicians have to understand the biology including kinetics of each marker. This can guide biomarker selection for specific condition. Herein, we summarize the recent findings of donor specific anti-human leukocyte antigen antibody, B lymphocyte stimulator, interferon-gamma induced protein of 10 kDa, and intracellular adenosine triphosphate monitoring, all of which have very strong evidence support for the clinical use in KT.

Core tip: There are many studies about roles and benefits of biomarkers in nephrology, including transplantation. Only some of them reach the clinical level with strong evidence support. Biomarkers can guide immunosuppressive adjustment, provide prognostic value, and guide early detect of allograft injury, particularly from allograft rejection. We summarized the potential biomarkers for kidney transplantation monitoring, including clinical implication, strength and weakness of each of them.

Kidney transplantation (KT) has been succeeded for a long-time but the improvement in graft outcome is only limited in the short-term[1,2]. The keys to achieving long-term kidney allograft survival are early detection of treatable cause of allograft dysfunction and the appropriate tailoring of immunosuppression. Over immunosuppression can result in infections and cancers whereas under immunosuppression can cause rejection of the transplanted kidney. Immunosuppressive drug level monitoring is currently the only method broadly used in clinical practice. The gold standard for KT monitoring is biopsy which is invasive. However, kidney biopsy is only useful once rejection has already occurred. The procedure is unable to predict rejection. Recently, there are growing numbers of biomarker studies for KT, ranged from experimental to clinical level. Understanding immunologic and physiologic changes of allograft and directly monitoring through blood and urine testing can guide management and immunosuppressive adjustment.

There are two main objectives for biomarker testing: (1) for diagnosis; and (2) for prognostic and outcome prediction. Some biomarkers can guide diagnosis and management during allograft dysfunction, whereas others can predict outcome and guide long-term management including immunosuppressive adjustment for rejection and drug toxicity prevention. The samples mainly used for monitoring are blood and urine. Blood sample is easily taken and handled but it is not directly excreted from the kidney allograft and can be diluted in the blood stream. Urine sample is directly contacted and excreted from the allograft which more represents kidney environment than blood sample. However, urine sample can be interfered by urine pH, urine protein, and urine volume. Furthermore, urine sample is not easily collected during anuric phase. Herein, we summarized the recent findings in blood and urine biomarkers mainly focusing on methods which can be easily tested in clinical practice of KT.

Donor specific antibody (DSA) is the anti-human leukocyte antigen (HLA) which is specific to donor HLA. It is the major obstacle in KT. In the study of 1329 KT recipients, the 4-year allograft survival was lower in recipients with positive DSA detected compared with the recipients with negative DSA[3]. There are many methods for DSA detection, ranged from lymphocytotoxic anti-human globulin (LCT-AHG) which has least sensitivity to the most sensitive and specific assay, the solid phase single antigen bead (SAB). DSA is a major cause of antibody mediated rejection (ABMR). Positive DSA by LCT-AHG is the absolute contraindication for KT. However, positive SAB but negative LCT-AHG (SAB positive/LCT-AHG negative) is not the absolute contraindication for KT. DSA is now the most widely used test in KT. DSA can be monitored from pre-transplantation period till many years post-transplantation. The pre-transplant DSA can predict post-transplant outcomes and guide perioperative management[4,5]. In post-transplantation period, DSA is included in one of the criteria for ABMR[6]. The newly presence of DSA (de novo DSA) prompts physician for evaluation for ABMR and increasing the level of immunosuppression before allograft function deteriorates (Figure 1)[7]. However, there are certain issues to be concerned in DSA interpretation. Only substantial number of the patients who developed de novo DSA have allograft function deterioration. A cohort study by Wu et al[8] showed that 9.5% and 19.0% of de novo DSA patients developed early allograft failure and early allograft function deterioration, respectively during a 3-year follow up. Indeed, the graft function of the 70% of de novo DSA patients remains stable for years. As such, DSA can be classified into the pathogenic- and non-pathogenic-DSA. The pathogenic DSA is likely to have at least one of these features: (1) DSA to HLA-DQ; (2) mean fluorescence intensity (MFI) > 7000; (3) DSA with C1q activating capacity; and (4) IgG1 or IgG3 subclasses[9]. The presence of DSA together with one of these characteristics prompts physician for allograft biopsy and treatment of ABMR to remove this pathogenic DSA in those who have pathological clues of allograft injury.

As anti-HLA antibody is the major barrier in KT, plasma cell and B-cell are currently the major targets of treatment. B lymphocyte stimulator (BLyS) is produced mainly by innate immune cells and binds to its receptor on B-cell and plasma cell. There are two cytokines in the BLyS system, B cell-activating factor (BAFF) and a proliferation-inducing ligand (APRIL). BLyS is required for the development of B-cell in earlier stages whereas APRIL is required for plasma cell survival[10]. In a model of murine cardiac allograft, BAFF deficient mice had longer allograft survival when compared to wild-type[11].

There are some issues to be concerned in interpretation of BLyS in KT. The first is the balancing between BLyS production by innate immune cells and utilization by B-cell. Increments in BLyS levels may be due to either increased production and/or reduced B-cell consumption. Recipients who received anti-rejection therapy with rituximab, a potent B-cell inhibitor, had a significant peak of BLyS levels at 3 mo post-treatment which can be explained by lower BLyS consumption from B-cells inhibition[15]. Second, there is a number of evidence in the roles of BLyS in immune regulation. BLyS is not only needed in B-cell or plasma cell activation, but also required by the regulatory B-cell which plays a very important role in immune regulation and transplantation tolerance[16]. Transplantation tolerance is a condition that the recipient immune system accepts allograft as a part of recipient and is the holy grail of transplantation. Recipients with tolerance require less immunosuppression or no immunosuppression needed in some circumstances. Increasing BLyS level in some certain conditions may be favorable as it may be a potential induction of transplantation tolerance.

We recently studied the benefit of BAFF testing in both low risk and high risk newly KT recipients and found that among recipient with positive pre-transplant DSA, the 6-month ABMR rate in recipients with higher perioperative serum BAFF level was significantly higher than those with lower perioperative BAFF level. In recipients with negative DSA, none of the patients with lower BAFF level developed ABMR while 17% of the higher BAFF recipients, despite negative DSA, still experienced ABMR (manuscript in preparation). This finding supports the benefit of adding BAFF in to pre-transplant immunologic risk evaluation together with DSA testing.

Induced protein of 10 kDa (IP-10) (also called CXCL-10) is one of the CXCR3 chemokine family. It is produced by tubular cells, mesangial cells and inflammatory cells and can be found in the kidney allograft[17]. In the setting of tubular inflammation, mainly acute rejection, IP-10 is elevated and highly expressed in urine (Figure 2). Recipients with T-cell mediated rejection or ABMR revealed higher urine IP-10 level compared to other pathological findings[18-20]. Many studies found that IP-10 measurement can detect subclinical tubulitis/rejection in surveillance allograft biopsy before allograft dysfunction developed[18,21]. 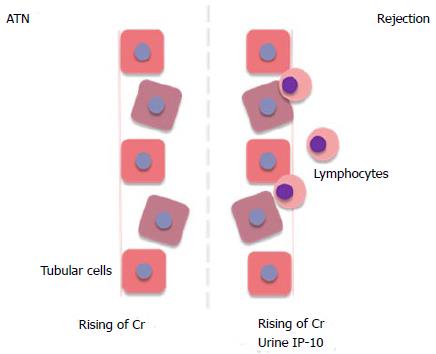 In the setting of delayed graft function (DGF), early acute rejection, which needs early treatment, has to be differentiated from ischemic acute tubular necrosis (ATN). Concerning the higher risk of bleeding complication during this period, the clinician is reluctant to perform kidney biopsy. Our group studied the usefulness of urine IP-10 monitoring during DGF period. Recipients with early post-operative ABMR had significantly higher urine IP-10 compared with recipients with pure ischemic ATN (manuscript in preparation). However, an adequate amount of urine is needed for IP-10 testing.

The low ATP patients were associated with infections, whereas the high ATP patients were associated with rejection[22]. A randomized controlled trial from Ravaioli et al[23] in liver transplant recipients found that dosing of immunosuppression guided by ATP monitoring provided higher 1-year patient survival compared to convention immunosuppressive drug adjustment. However, some studies revealed no association between ATP level and transplantation outcomes[24-26]. This can be explained by the fact that the ATP level is not associated only with the T-cell reactivity but is also affected by the number of white blood cell (WBC), particularly in patients receiving lymphocyte depleting antibody. The number of WBC has to be considered when interpreting the result of ATP values. ATP measurement should not be used solely without other monitorings.

There are many biomarkers for KT monitoring. Each biomarker provides specific purpose for measurement. Knowing the immunologic mechanisms can guide biomarker selection. Together with biomarker monitoring, clinical clues should not be overlooked in taking care of KT recipients.

The authors would like to thank Nuttha Lumlertgul for assistance with the audio core tip.