The pathogenesis of autoimmune diseases (AIDs) is characterized by a female preponderance. The causes for this sex imbalance are based on several hypotheses. One of the most intriguing hypotheses is related to an X chromosome inactivation (XCI) process. Females are mosaics for two cell populations, one with the maternal and one with the paternal X as the active chromosome. Skewed XCI is often defined as a pattern where 80% or more of the cells show a preferential inactivation of one X chromosome. The role of skewed XCI has been questioned in the pathogenesis of several AIDs, such as autoimmune thyroid diseases and rheumatoid arthritis.

Core tip: The causes and mechanisms for sex imbalance are based on several hypotheses. X chromosome inactivation is an important hypothesis to explain the female preponderance.

Autoimmune diseases (AIDs) are a diverse group of complex diseases, characterized by loss of self-tolerance causing immune-mediated tissue destruction, and affect up to 5%-10% of the general population[1,2]. AIDs can be divided into two main categories: the organ-speciﬁc and systemic AIDs. In organ-speciﬁc AIDs, the immune attack is conﬁned to one organ or organ system. In the majority of those diseases, target tissues are of a neuroendocrine character. The most organ-speciﬁc AIDs studied are type 1 diabetes (T1D), autoimmune thyroid diseases (AITD), Addison’s disease and Sjögren syndrome. In systemic AIDs, target tissues and molecules are widespread in the body. Prototypes are systemic lupus erythematosus (SLE) and rheumatoid arthritis (RA).

The development and progression of AIDs is a multifactorial process that depends on the interaction between genetic background and a number of environmental factors. Clinically different autoimmune phenotypes may share common susceptibility genes, which may act as risk factors for autoimmunity. Evidence for shared susceptibility genes is obtained from the observation that several AIDs tend to cluster in the same families[3,4] and also that the chromosomal regions showing linkage to AIDs tend to overlap[5,6]. Genetic susceptibility to AIDs is predominantly associated with genes of the major histocompatibility complex (MHC). Human MHC molecules are encoded in several closely linked genes that comprise of the human leukocyte antigen system on the short arm of chromosome 6. However, inheritance of MHC haplotypes providing susceptibility to an AID is not sufficient for disease development. Evidence of linkage to numerous non-MHC-linked chromosomal regions has been reported by several studies in humans[7-10].

In most of the AIDs, females are more commonly affected than males. The causes and mechanisms for this sex imbalance are based on several hypotheses proposed. These include sex hormones and reproductive history, environmental factors, fetal microchimerism, a skewing in X-chromosome inactivation patterns, and major defects in the sex chromosomes[11]. Experimental data demonstrate a sexual dimorphism in the immune response in humans with stronger cellular and humoral immune reactions in females. Several studies have showed disease exacerbations during speciﬁc periods of the menstrual cycle or pregnancy in patients with AIDs such as SLE. Hormones are implicated in the immune response. In fact, estrogens can inﬂuence lymphocyte maturation, activation and synthesis of antibodies and cytokines[12,13]. Estrogen receptor ligands modulate antigen presentation[14]. However, despite the considerable work done on the relationship between sex hormones and autoimmunity, differences in sex steroid levels do not seem to provide a convincing explanation for the female predisposition to AIDs[11].

Environmental factors more commonly associated with women have also been suggested to play a role in autoimmunity initiation. Both a permissive genetic background and an environmental trigger have been suggested as being necessary to induce an AID[15]. Factors such as speciﬁc xenobiotics or bacteria are ideal candidates in the environmental model but solid evidence of a causative role is awaited.

The X chromosome contains genes that play a role in the maintenance of physiological sex hormones levels. It has been suggested that X chromosome abnormalities might play a pathogenic role. Genetic disorders associated with X chromosome abnormalities, such as Turner syndrome or premature ovarian failure, display autoimmune manifestations[16,17]. More importantly, women affected with primary biliary cirrhosis (PBC), scleroderma (SSc) and AITD are characterized by an enhanced X monosomy rate in peripheral blood cells, mainly T and B lymphocytes[18,19]. These findings support the thesis that sex chromosome instability may play a role in autoimmunity.

In early female embryonic development, one of the two X chromosomes is inactivated[20]. Females are therefore mosaics for two cell lines, cells with the paternal and cells with the maternal X chromosome as the active X. The inactivation process is random and permanent for each daughter cell and most females have approximately 50% of each cell type. A skewed X inactivation (XCI) pattern represents a marked deviation from this distribution (80% or more) and may be the result of chance, genetic factors or secondary selection processes[21] (Figure 1). 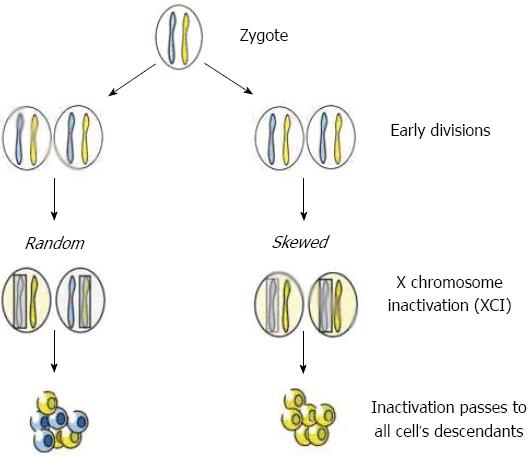 Because X chromosome choice is assumed to be mostly random, both paternal and maternal antigens will be recognized by the immune system within the thymus and any T cells that have high affinity for such antigens will be deleted by apoptosis[22]. It is immediately obvious that, if such deletion of self-reactive T cells was not successful for one set of X antigens or even just a few antigens, their expression in the periphery may be seen as foreign and the stage would be set for an autoimmune response as suggested for other antigens[23].

Loss of immunological tolerance to self antigens is an important feature of an AID. T cell tolerance, which appears to be broken in many of these diseases, is thought to be established by negative selection against potentially self-reactive T cells in the thymic medulla and cortex-medulla junction. Professional antigen-presenting cells, particularly dendritic cells, mediate the negative selection process[24,25]. It has been demonstrated that risk of autoimmunity could be increased by a lack of exposure to self antigens in the thymus and the presence of autoreactive T cells[26]. A potential mechanism through which lack of exposure to self antigens could occur in women is a disturbance in the XCI process[27-29].

The hypothesis that an altered XCI pattern might play a role in AID susceptibility was first proposed in SLE[28,30] but the lack of an increased frequency of skewed XCI between affected and non affected monozygotic twins did not support the working hypothesis[30]. Similarly, examination of XCI patterns in peripheral blood from female patients with autoimmune diseases (SLE, T1D, multiple sclerosis and juvenile rheumatoid arthritis) did not reveal skewed X inactivation patterns[29]. No evidence for a role of skewed XCI in the pathogenesis of multiple sclerosis was produced by the work of Knudsen and colleagues[31]. Furthermore, a case-control study on 166 women affected with PBC and 226 age-matched control women did not reveal a signiﬁcant association of a skewed XCI between the two groups[32]. We should note that these negative data were obtained in DNA from blood and this may not be a representative tissue for all AIDs as the XCI pattern varies between tissues.

A different scenario seems to apply to SSc and AITD. In two subsequent studies with a total of 149 SSc patients, Ozbalkan studied the XCI patterns in peripheral blood cell DNA from 55 women affected by SSc and 124 control women. Their results indicated a greater proportion of a skewed pattern of XCI (49%) than in controls (2.4%) (P < 0.0001)[33]. Uz et al[34] reported an extremely skewed XCI pattern associated with this disease as well. Similar results were obtained in a Turkish and Tunisian cohort of control women affected with AITD. The prevalence of skewed XCI in females affected with AITD was 19% but only 2.4% in controls (P < 0.0001)[35,36]. Similar associations were independently recapitulated in case control studies in RA, JIA and Sjögren syndrome.

Skewed XCI has also been studied in monozygotic twins. Brix et al[37] conducted two twin case-control studies; one with twin individuals with and without AITD and the second with twin pairs discordant for AITD. Skewed XCI was signiﬁcantly more common in twins than in unrelated women; we note that patterns were associated with the risk of disease in discordant twins[37].

However, these ﬁndings were based on limited numbers of informative subjects and did not include age matched controls; in fact, although variable prevalence rates of a skewed XCI status have been reported, studies taking into account age as a modiﬁer factor clearly indicate that as many as 16% of healthy women over the age of 50 are characterized by a severe XCI skewing[26,38-40].

The X chromosome participates in different pathways involved in the immune response and offers some potential hypotheses for the development of autoimmunity and for the female predominance in AIDs. It would also be of interest to study the XCI pattern in females affected with other autoimmune diseases and to test the XCI patterns of many cell types. Moreover, it appears premature to conclude now that skewed XCI is associated with a female prevalent AID.