We present a patient with a history of colonic polyposis and family history significant for colon polyps and colorectal cancer (CRC). The patient and the family also had a history of bone loss of the jaw and early tooth loss, consistent with oligodontia. Genetic testing revealed the patient to have a previously unpublished variant of unknown significance (VUS) in the AXIN2 gene. These clinical findings have been demonstrated previously in only two other families, both of which exhibited oligodontia, colorectal neoplasia (polyps and cancer) and a heterozygous mutation in AXIN2. The AXIN2 protein is component of the Wnt pathway, which is known to be vital for organism development and cellular homeostasis. Alterations of the Wnt pathway lead to cell proliferation and neoplasm, in addition to agenesis of physical structures (such as teeth). The analysis of our pedigree further supports an association between colonic neoplasm (polyposis and CRC), the AXIN2 gene in general, and this particular VUS. It also highlights the importance of analyzing and disseminating information on pedigrees with less commonly encountered genomic abnormalities so that genotypic-phenotypic correlations can be solidified.

Core tip: Biochemical research, murine models, and 2 prior human families lend support to a genotypic-phenotypic correlation between alterations in the AXIN2 and polyposis/colorectal cancer. Our paper uses genetic testing and pedigree analysis to include a third family. This information would impact future genetic testing, the classification of identified variants, and screening in those with identified AXIN2 mutations and variants.

Concern for familial colorectal cancer (CRC) syndromes results in germline genetic testing and DNA changes are often classified as variants of unknown significance (VUS) in approximately 30% of testing. The International Society for Gastrointestinal Hereditary Tumours Database (InSiGHT, http://www.insight-group.org) that collects variants to support research and clinical management lists greater than 2000 different variants, which are thought to be a minuscule representation of the actual number that exist[1]. When a VUS is identified, it is difficult to determine if it is responsible for the patient’s phenotype. As more genetic testing is completed, the additional collected data can lead to variant reclassification. This expanding information results in a more definitive link to specific clinical syndromes. In this report we present a case of a patient and her family that supports a link between alterations of a gene and a phenotypic result of oligodontia and colonic neoplasm.

A 55-year-old woman, the proband, underwent screening colonoscopy revealing 12 tubular and tubulovillous adenomas, 0.5-1.8 cm in size. Her family history was notable for gastrointestinal neoplasms. Multiple colon polyps were discovered after routine screening in the patient’s brother (in his 50s) and her father (age unknown). CRC was diagnosed in one of the patient’s sisters (in her 40s) and in her paternal grandfather (in his 80s). The patient has 3 other siblings that have not undergone colonoscopy. The patient’s mother had bile duct cancer (in her 60s) and a maternal cousin received an unknown cancer diagnosis (in her 20s). The patient, her father and her siblings all have bone loss of the jaw and early tooth loss, consistent with oligodontia. A pedigree is attached (Figure 1). 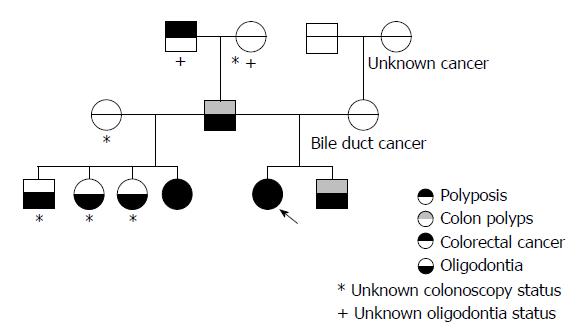 As per guidelines, germline genetic testing was performed given the patient’s history of > 10 adenomas and family history of colon polyps and cancer[2]. Results demonstrated a heterozygote VUS [c.265C>A (p.Gln89Lys)] in the AXIN2 gene This previously unpublished variant occurs at a position that has been conserved across species, but the effects of the glutamine to lysine substitution upon the resultant protein’s structure and function are unclear. APC, MUTYH, MLH1, MSH2, MSH6, PMS2, tp53 and EPCAM sequencing revealed no abnormalities.

Familial adenomatous polyposis (FAP) and Lynch syndrome (LS), are the most commonly encountered familial CRC syndromes. Both of these conditions have been well described at the genetic level. FAP involves the adenomatous polyposis coli (APC) gene, which is classified as a tumor suppressor gene[3]. Mutations in the APC gene lead to the phenotype of numerous benign adenomatous polyps that are capable of malignant transformation. LS is an autosomal dominant genetic condition that increases the risk of colon and other cancers through inherited mutations that impair DNA mismatch repair[4]. Several genes have been implicated in LS, most frequently MSH2, MLH1, MSH6, PMS2 and case reports of others[5,6]. Despite our knowledge of these and other well-described CRC syndromes, such as MUTYH polyposis, there are still cases where no genetic etiology is found, even when suspected. Leading to speculation that other syndromes and genes remain to be described[7].

The germline and somatic mutations within the AXIN2 gene are believed to affect the beta-catenin-dependent Wnt pathway (Figure 2), which regulates cell differentiation during development and cellular homeostasis[8]. The signal cascade begins when the Wnt protein binds to the Frizzled family receptor, a distinct family of G-protein coupled receptors[9]. This leads to an increase of β-catenin in the cytoplasm of a cell and an eventual translocation into the nucleus, where it acts as a transcriptional co-activator of transcription factors that belong to the TCF/LEF family. The APC, AXIN1 and AXIN2 proteins are involved in the assembly of a destruction complex that degrades beta-catenin and provide negative feedback regulation[10]. 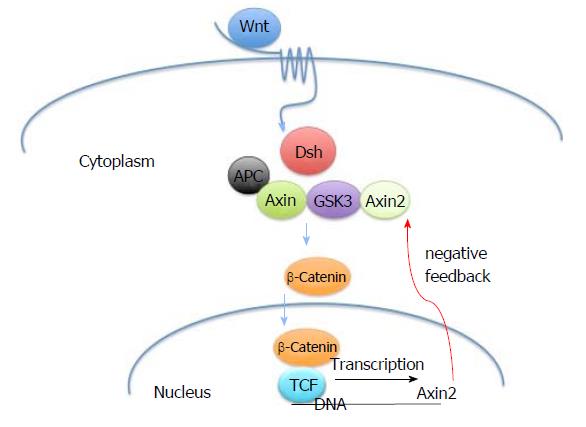 When a mutation in the AXIN2 gene occurs, the resulting transcribed mRNA transcribed is truncated, lacks a C-terminal domain and is guided to the degradation pathway[11]. This alteration prevents AXIN2 from interacting with the other necessary proteins and providing the scaffolding for the destruction complex[12]. Disruption of the destruction complex allows escape of beta catenin, increased transcription of Wnt target genes, and the development of colon polyps and CRC[13].

As there are only 2 reported pedigrees linking AXIN2 with polyposis and CRC, the relationship between this gene and colonic neoplasia has not been correlated in a widespread fashion. The analysis of our pedigree further supports an association between colonic neoplasm (polyposis and CRC), the AXIN2 gene in general and with this particular previously unreported VUS. In our pedigree, the fact that oligodontia was present in the patient’s father and that the patient’s sister with CRC did not share the same mother supports that the AXIN2 VUS was paternal in origin. This is an important distinction as there is also a strong history of cancer in the maternal family line.

This report highlights the importance of analyzing and disseminating information on pedigrees so that genotypic-phenotypic correlations can be solidified. This is of particular consequence given the increased rates of germline genetic testing in populations and resultant identification of VUSs[15]. AXIN 2 is not a commonly tested gene in patients or families suspected of harboring a CRC syndrome. Hence, the true prevalence of AXIN 2 abnormalities in potential syndromic families is unknown and there may be other phenotypic associations with the AXIN 2 gene that are as of yet undiscovered. Further research to better understand the relationship between AXIN 2 and colorectal neoplasia is required. As genetic panel testing becomes more common, it may be beneficial to include AXIN 2 analysis, particularly in those that test negative for more common CRC syndromes.

A 55-year-old woman with 12 tubular and tubulovillous adenomas and signifiant family history of colon polyps and gastrointestinal neoplasms, including colorectal cancer (CRC).

Support for a familial polyposis/CRC familial syndrome based on genetic mutation of AXIN2.

Increased frequency of screening colonoscopies for the patient, her family members and possible genetic testing and counseling.

Two other families with significant polyposis/CRC findings with AXIN2 mutations.

It will be important to categorize all genetic abnormalities to better understand their clinical significance.

Country of origin: Genetics and heredity