Research Domain of This Article
Parasitology

Eurytremiasis is an important parasitic disease of cattle that was recently suggested to be a neglected and emerging human disease in Brazil. Based on a misinterpretation of the life cycle of the parasite, it was suggested that a great number of people could be infected with this fluke in the country. In the present letter, aspects of the life cycle of Eurytrema spp. are revisited and clarified. The mechanism of transmission previously reported for the few accidental human cases involved the ingestion of raw or undercooked insects (grasshoppers and crickets) harboring the infective metacercariae. In reality, the zoonotic potential of Eurytrema species is extremely low, and human eurytremiasis is not, and probably never will be, a zoonotic disease in countries where entomophagy is not a common food habit.

Core tip: In the present letter, the life cycles of species of Eurytrema, pancreatic flukes of ruminants, are revised. Given the transmission of the parasite by the ingestion of infected insects, we suggest that human eurytremiasis is not a zoonotic disease in countries where entomophagy is not a food habit. Therefore, eurytremiasis should not be considered a neglected or emerging disease in Brazil.

Eurytremiasis is a helminthic disease caused by dicrocoeliid trematodes belonging to the genus Eurytrema, which includes flukes that parasitize the pancreas of ruminants in South America and Asia. In Brazil, this pancreatic disease is endemic in localities from central-western, southern and southeastern regions, where the infection prevalences of up to 75% have been reported in cattle[1-3]. Parasitism by Eurytrema spp. is generally subclinical; however, pathological alterations, such as chronic interstitial pancreatitis, have been documented. Moreover, in cases of high worm burdens, chronic wasting and death of animals are verified and can be related to damage to cattle breeding[4]. The infection of humans with this pancreatic trematode, although possible, is extremely rare. In fact, only about a dozen cases of eurytremiasis, diagnosed by coproscopy or necropsy, were reported in China and Japan several decades ago, as reviewed by Ishii et al[5].

Recently, important aspects related to the epidemiology, diagnosis, treatment and control of eurytremiasis in Brazil were discussed by Schwertz et al[3]. However, the authors unfortunately made some mistakes regarding the life cycle and therefore the transmission mechanisms of Eurytrema. Perhaps based on this incorrect information, they suggested that it is possible that a great number of people could be infected with this fluke in the country. The authors suggested, without scientific support, that the absence of reports and the probable occurrence of human eurytremiasis in Brazil are justified by (1) false negative results in coproparasitological tests; (2) the subclinical condition of the infection; (3) the use of serological tests in parasitological diagnosis; and (4) the existence of feeding habits (ingestion of wild watercress) in areas with high prevalence of the parasite as constituting an important risk factor for human infections[3]. Although animal eurytremiasis is already a well-known and admittedly important disease in the country, some corrections are necessary to demonstrate that the lack of documented human cases in Brazil is not related to the factors enumerated above but to intrinsic factors related to the life cycle of the parasite. Thus, human eurytremiasis is not an emerging or neglected zoonotic disease in Brazil, as discussed below.

The life cycle of species of the genus Eurytrema (Figure 1) take place in the terrestrial environment and involves a land snail, the Asian tramp snail (Bradybaena similaris), as the first intermediate host. Insects, mainly grasshoppers (Conocephalus spp.) and crickets (Oecanthus spp.), are the second intermediate hosts[6,7]. The transmission of the parasite to the definitive host occurs exclusively by the eating these insects containing infective metacercariae. In the case of ruminants, this event occurs accidentally during the act of grazing. Unlike what was presented and discussed by Schwertz et al[3], the formation of metacercariae in the external environment, including in edible plants, is not observed in the case of Eurytrema spp. Strangely, the transmission pattern of Eurytrema species discussed by Schwertz et al[3] is similar to that of Fasciola hepatica (F. hepatica), a zoonotic liver fluke from ruminants, which is transmitted by the ingestion of the metacercariae present in plants or water. In fact, the figure legend describing the life cycle of Eurytrema presented by Schwertz et al[3] cited references on the life cycle of F. hepatica, suggesting that the authors accidentally combined the life cycles of Eurytrema spp. and F. hepatica. However, it is already widely known that the life cycle of Eurytrema spp. and all other species belonging of the family Dicrocoeliidae obligatorily require second intermediate hosts (arthropods). The ingestion of wild watercress is therefore not a risk factor for human eurytremiasis. 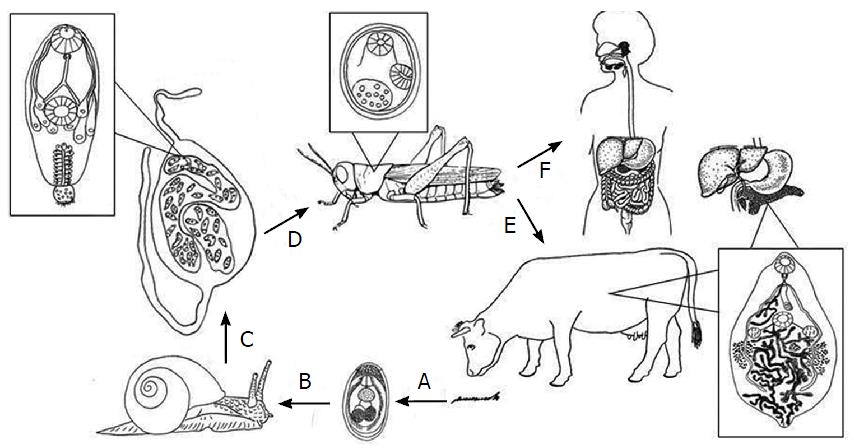 Figure 1 The life cycle of the pancreatic fluke Eurytrema coelomaticum. A: Eggs containing formed miracidia are passed through the feces of definitive vertebrate hosts (ruminants) and ingested by the first intermediate host, the land snail Bradybaena similaris; B: Miracidia hatch into the digestive tract of the snails and develop successive generations of sporocysts (mothers and daughters) that produce microcercous cercariae; C: Daughter sporocysts containing cercariae are expelled from the snail in the terrestrial environment and ingested by the second intermediate host, insects from the order Orthoptera (grasshoppers and crickets); D: Encysted metacercariae are formed inside the body cavity of the insects; E: Insects containing metacercariae are ingested by ruminants. The metacercariae are excysted in the intestine and actively migrate to the pancreas, where they grow, mature sexually and produce eggs, which are passed in the feces; F: The accidental infection of humans occurs exclusively through the ingestion of insects, which is unlikely in Brazil.

Regarding the few human cases of eurytremiasis already diagnosed in Asia, there is no conclusive evidence on the mechanism of transmission of the parasite, although it had been suggested that transmission likely occurred through the ingestion of grasshoppers harboring metacercariae of the parasite[5]. In Brazil, there are some reports of snails and insects naturally infected with these flukes in areas associated with the occurrence of parasitism in cattle[8,9]; however, no case of human eurytremiasis has been reported so far. It should be noted that the use of insects, including orthopterans, as a food source is a common practice in some Asian countries[10]. Thus, the ingestion of raw insects containing the metacercariae of Eurytrema may be involved in the few human cases previously diagnosed in Asia. However, entomophagy is not a food habit in Brazil; therefore, the transmission of Eurytrema coelomaticum is an event that is both extremely rare and unlikely. Certainly this difference in the eating habits explains the lack of human cases in the country. The possibility of the accidental ingestion of infected insects, perhaps by children or mentally ill individuals from endemic areas for cattle eurytremiasis, cannot be completely excluded. Given the remote chance for transmission of this fluke to humans, there are no reasons for the eurytremiasis to be considered an emerging or neglected disease in the context of tropical medicine and public health. However, the importance of the parasite in veterinary medicine should be emphasized, and the new initiatives presented by Schwertz et al[3] for experimental studies on antiparasitic drugs, immunological aspects and pathological alteration related to eurytremiasis in the context of veterinary medicine should be encouraged.

Although the zoonotic potential of several helminths of veterinary importance have recently gained worldwide attention[11,12], it is important to keep in mind that there are species of helminths whose zoonotic potential is extremely low due to myriad of biological factors, including impediments related to the mechanism of transmission. The possibility of future occurrences of accidental cases of humans require constant surveillance, however it cannot be indicative of a new disease among so many that already require our attention in the area of tropical medicine.