The trematodes of the genus Eurytrema are low pathogenic pancreatic parasites, but can be related to a decrease in cattle productive performance and eventually death. Parasitized animals develop chronic interstitial pancreatitis and may show a productive performance drop and emaciation. Human infection by Eurytrema sp. has already been reported in other countries as an incidental finding during autopsy or routine tests, but the parasite has not been found in humans in Brazil. However, it is possible that a large number of people could be infected, since parasitological tests have low sensitivity and the parasite is neglected as a pathogen for humans and even animals. Attempts to control and treat Eurytrematosis have generally presented low effectiveness. With the aim to control the disease and provide more information regarding its pathogenicity, our research group is developing a number of studies about Eurytrema spp. We hope to determine the damage in productivity, as well as, establish an efficient protocol for treatment and control of Eurytrematosis based on immunoprophylaxis and antiparasitical drug therapy.

Core tip:The trematodes of the genus Eurytrema are low pathogenic pancreatic parasites, but can be related to decrease in productive performance and eventually death of infected animals. Human infection has already been reported but could be underestimated in Brazil. With the aim to control the disease and provide more information regarding its pathogenicity, our research group is developing a number of studies about Eurytrema spp. We hope to determine the damage in productivity, as well as, establish an efficient protocol for treatment and control of Eurytrematosis based on immunoprophylaxis and antiparasitical drug therapy.

EURYTREMATOSIS: AN EMERGING AND NEGLECTED DISEASE IN SOUTH BRAZIL

The trematodes of the genus Eurytrema, belonging to the family Dicrocoeliidae are parasites known as low pathogenic and are generally considered to be an incidental finding at necropsy or at slaughterhouse, but they can be related to a decrease of an infected animals productive performance, and eventually death[1]. Among the species of Eurytrema we can highlight Eurytrema pancreaticum (E. pancreaticum) and E. coelomaticum, common parasites of pancreatic ducts of ruminants, occasionally found in the bile ducts and rarely in the small intestine. E. pancreaticum has been reported in cattle, goats, sheep, swine, buffaloes, camelids, cervids and human beings, while the E. coelomaticum has been reported in cattle, goats, sheep, buffaloes, leporids and camelids[2]. In Brazil the parasites have two different intermediate hosts, the mollusk Bradybaena similaris and different species of arthropods from the genus Conocephalus[2]. The life cycle is explained in Figure 1. 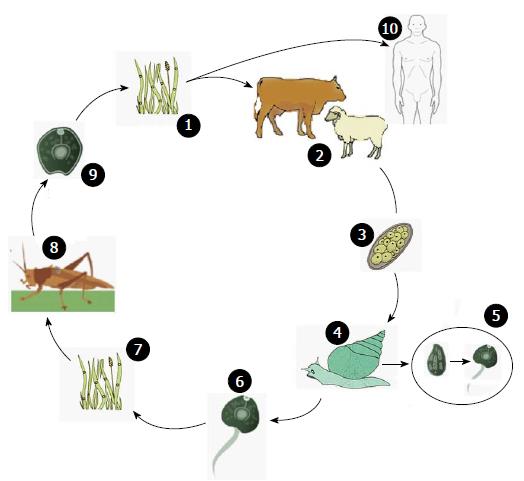 Figure 1 Eurytrema spp. life cycle. 1: Infection by grazing on infected grass; 2: Vertebrate host (cow or sheep); 3: Unembryonated eggs released in feces; 4: Ingestion of eggs by Bradybaena sp.; 5: Sporocyst mother in sporocyst son in the digestive tube between 90 and 350 d, according to envionmental conditions. Sporocyst sons containing cercarea are released in the environment few hours before dawn; 6: Cercarea released in the environment; 7: Ingestion of cercarea by Conocephalus sp.; 8: Development of infective metacercarea inside grasshopper; 9: Infective metacercarea released in the environment; 10: Possible human infection by consumption of infected salad. One egg of Eurytrema spp. produces 100 sporocyst sons which turn into 200 cercareas and latter 20000 infective metacercarea. Adapted from Tessele, CDC and Bennett[6,15,16]. CDC: Centers for Disease Control and Prevention.

In areas where the disease occurs, the prevalence among animals is generally high. In a study undertaken by our group[3] we identified a prevalence of 75% of Eurytrema sp. in cattle from the West of Santa Catarina State, with 100% of the farms having at least one infected animal. In another Brazilian study, authors found a lower prevalence: between 8.3% and 40.55% in different regions of the State of Paraná (the state north of Santa Catarina) and also observed a seasonal variation in the parasitism[4]. Bassani et al[5] found prevalences between 26.9% and 72.9% in the central-west region of Paraná, but in this study a definite seasonal distribution was not observed. Whereas in the State of Rio Grande do Sul (the state south of Santa Catarina) the parasitism by Eurytrema sp. is uncommon[6]. In spite of the high prevalence reported in some studies, clinical cases in cattle with emaciation and mortality are sporadic and when occurs affects no more than 3% of the herd[1].

Human infection by E. pancreaticum has already been described as an incidental finding at autopsy or in routine coproparasitological tests[7]. There are no published reports in humans in Brazil, but it is possible that a great number of people could be infected, since in general, it is common that routine coproparasitological tests result in false negatives. Similarly to animals, human infection may be subclinical. Another important aspect is that nowadays in medical practice of parasitological diagnosis, many Brazilian physicians request serological tests, instead of the coproparasitological ones, mainly due to the higher sensitivity. However, since Eurytrema sp. has not been described as a human pathogen in Brazil, it is not investigated and is likely to be underestimated. Some feeding habits in areas with high prevalence of the parasite seem to be risk factors for human infection. The consumption of wild watercress as salad is common in our region and is an important risk factor for infection by Fasciola hepatica[8] and could also be an important risk factor for Eurytrema sp.

In Brazil, the pathological pattern of the clinical cases of Eurytrematosis in cattle was described as chronic and progressive weight loss related to interstitial pancreatitis[1,9,10]. In our routine necropsies of cattle that have died for different reasons, in about 92% of the cases Eurytrema sp. was found in the pancreatic ducts (Figure 2), most of the times with moderate to severe infections. During histopathology we have observed that the parenchyma of the pancreas is extensively replaced by fibrous connective tissue (Figure 3), which could disrupt the function of the organ. 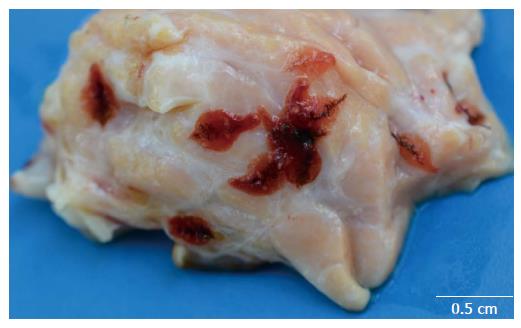 Figure 2 Eurytrema sp. in bovine pancreas. The fluke is red, oval shaped and measuring between 8 to 13 mm in length by 6 to 7 mm width. The pancreas of infected animals has a harder consistency and hyperplasic ducts partially filled with adult parasites are observed. 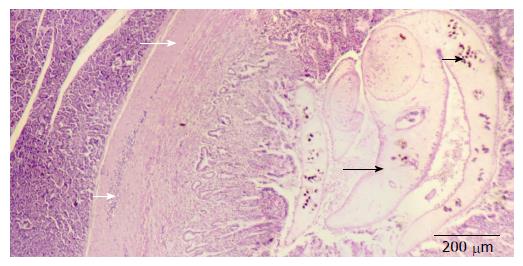 Attempts to control and treat Eurytrematosis, when applied, generally present low efficiency. This fact seems to be a result of the parasites resistance against the main endoparasiticides used and the high rate of reinfection. Yamamura[11] conducted a trial with four molecules of endoparasiticides commonly used in veterinary practice: nitroxinil, triclabendazole, rafoxanide and closantel, and reported that none of them were efficient. Araújo and Belém[12] reported that albendazole was not efficient against Eurytrema sp. in naturally infected cattle, even when administrated in high dosages (17.5 mg/kg bw).

There are few reports about efficient treatments against Eurytrematosis in cattle. Sakamoto et al[13] described treatment regimes involving two applications of nitroxinil with an interval of 20 d, and three applications of praziquantel with intervals of two days; both regimes reduced the output of eggs in feces to 0. Jiraungkoorskul et al[14] in an in vitro trial concluded praziquantel should be the chosen drug for Eurytrematosis control, since it caused the death of 100% of the parasites, while triclabendazole did not present efficacy.

There have been only a few in vivo trials aiming to control the disease, and at the moment there are no treatment protocols establishing an appropriate chemotherapy. Even if there are some apparently efficient antiparasitics, the treatment of an infection cannot be accomplished in Brazil. There are no available products containing praziquantel authorized by the regulatory agencies to be administrated in cattle in Brazil, while nitroxinil, according to the current legislation, cannot be applied in dairy cows. Therefore, these two factors make the treatment of Eurytrematosis impossible in dairy cattle in Brazil, as well as in many other countries.

With the aim to control the disease, our group is developing many studies: (1) Molecular determination of the Eurytrema species that occurs in cattle and sheep in our region; (2) Establishment of the effectiveness of antiparasitic drugs against Eurytrema sp. strains presented in the west of Santa Catarina, Brazil. For this, dairy cattle herds will be segregated into groups, and each group will be treated with a different molecule, taking into account the main drugs used in the region and with known action against trematodes. The second aim of this work is to evaluate if the sub-clinical damage in the pancreatic parenchyma indirectly lead to economic losses; (3) Measure the oxidative stress caused by the parasitism. This comprises gauging the parameters that indicate cellular lesions and the antioxidant status in the pancreas. There are many studies that correlate oxidative stress with clinical-pathologic findings and pathogenesis in infectious diseases. The consequences of infection by Eurytrema sp. to an animals’ health and productivity have not been elucidated and articles about the oxidative stress in animals parasitized by Eurytrema sp. are not available; and (4) Another future study will reproduce the parasites’ complete life cycle in the laboratory, aiming to find possible immunogens in the newly encysted juveniles stage of Eurytrema sp.

The results of our studies will contribute to elucidate the real importance of Eurytrematosis to animal health and production in Brazil. In the long term, we expect to contribute with directly applicable results to both agribusiness and public health. It is necessary to determine protocols capable of controlling Eurytrematosis in an efficient and viable way. Productivity losses may also be estimated to determine the real economic impact and importance of the disease. We also expect to find different ways to apply a biological and/or immunoprophylaxis control against this parasite, as chemical therapy alone is typically insufficient for the control and prevention of many illnesses, both in veterinary and human medicine.