Parenteral nutritional associated liver disease (PNALD) was noted in 21 (43%) infants based on db. Among the 27 high transfusion infants, PNALD was present in 17 (64%) based on elevated direct bilirubin which was significantly greater than the low transfusion recipients. About 50% of the infants, who were transfused 101-125 mL packed red blood cells, developed PNALD based on elevation of direct bilirubin. All infants who were transfused more than 200 mL of packed red blood cells developed PNALD. Similar results were seen when using elevation of aspartate transaminase or alanine transaminase to define PNALD.

In this retrospective, pilot study there was a statistically significant correlation between the volume of PRBC transfusions received by premature infants and the development of PNALD.

Core tip: The etiology of parenteral nutrition associated liver disease (PNALD), a commonly encountered morbidity in the neonatal intensive care unit (NICU) remains unknown. Potentially hepatotoxic packed red blood cell (PRBC) transfusions are routinely administered in this setting. Whether PRBC transfusions increase the prevalence of PNALD is a clinical question that has not been systematically investigated. This pilot study demonstrated that in a cohort of NICU infants who received greater volumes of PRBC, there was a significantly higher prevalence of PNALD. Further investigations to define the exact risk are warranted to minimize NICU stays, costs, and future liver damage.

Preterm infants are among the most highly transfused patient populations, in part because of the presumption that packed red blood cells (PRBC) improve oxygen delivery[1]. Approximately 38000 premature neonates receive more than 300000 transfusions annually[2]. PRBC transfusion guidelines are based on expert opinion, rather than evidence-based data, and vary among practitioners, institutions and clinical situations[3,4]. The increased susceptibility of neonatal intensive care unit (NICU) patients to develop anemia requiring blood transfusions is attributable to multiple factors. These include prematurity itself, nutritional deficiencies, iatrogenic blood loss, and other medical conditions commonly seen in the NICU such as sepsis, hemolysis, bleeding disorders, and surgery[5].

Although PRBC transfusions are believed to be helpful in the NICU[6], they have been implicated in the development of bronchopulmonary dysplasia, acute lung injury, necrotizing enterocolitis (NEC), intraventricular hemorrhage, and retinopathy of prematurity[7,8]. Multiple transfusions may result in iron deposition leading to dysfunction in the liver, heart and other organs[9-14]. Because RBC life span in preterm infants is shorter, accelerated cell breakdown results in even greater degrees of hepatic iron deposition. Efforts to decrease transfusion requirements in low birth weight infants include utilizing erythropoietin in the first 48 hour of life[15]. This hematopoietic agent has been suggested to have a neuroprotective effect in newborns[16].

The published literature most often defines PNALD in this setting as a direct bilirubin (db) > 2.0[20,21]. As this was a pilot study to provide preliminary data on predicting hepatobiliary disease in the premature infant, transaminase values were also examined. While alanine transaminase (ALT) has been considered a more specific marker for liver dysfunction, aspartate transaminase (AST) has recently been employed as part of a derived AST/platelet ratio index, to predict liver pathology in infants with intestinal failure[22] and biliary atresia[23].

Most low birth weight infants, especially sicker babies, are unavoidably exposed to multiple risk factors associated with hepatobiliary dysfunction, including PN and PRBC transfusions. This retrospective study was conducted to determine if there was any preliminary evidence suggesting that the volume of PRBC transfusions received was associated with the subsequent development of PNALD in this population.

This retrospective chart analysis was performed as part of a study of 49/51 premature infants maintained on PN > 30 d, at the Children’s Hospital at Downstate, State University New York, Downstate Medical Center. Two patients, one with cystic fibrosis and one with Hirschsprung disease (disorders independently associated with cholestasis), were excluded from analysis. In these 49 infants, we assessed the timing and volume of PRBC transfusions, and PNALD was primarily defined as a db level > 2.0 mg/dL[20,21].

One of the authors, SMS performed all of the biomedical statistics. Kaplan-Meier plots estimated the amount of PRBC transfused to attain PNALD onset by this db criterion. Similar analyses were performed for elevation of AST and ALT as alternative markers of PNALD. Proportional hazards regression analysis used age at PNALD onset as the dependent variable, and cumulative RBCs as the time dependent predictor of interest. Potential confounders were cumulative days on TPN (time-dependent) and birth weight. Odds ratios, hazard ratios (HR) and confidence intervals (CI) are reported. This study was approved by the Institutional Review Board of SUNY Downstate Medical Center. 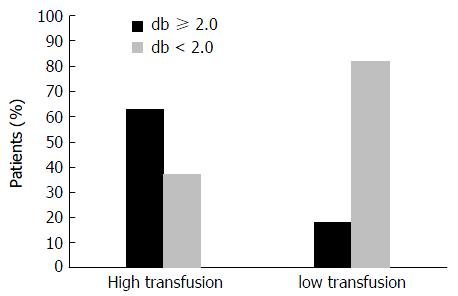 Kaplan-Meier plots provide another perspective on the relationship between PRBC transfusions and PNALD (Figure 2). With cumulative transfusion volumes of 126-150 mL, the prevalence of db > 2.0 mg/dL reached 50%. All infants who were transfused > 200 mL PRBC demonstrated PNALD. Regression analysis showed neither birth weight nor cumulative time on TPN were significant predictors of these endpoints, when used as linear covariates (data not shown). However, cumulative PRBCs were a significant predictor of db ≥ 2.0 with an estimated HR associated with each additional 15 mL/kg transfused of 1.09 (95%CI: 1.00-1.19). After controlling for birth weight and PN duration, PRBC volume transfused remained a predictor of reaching the primary end point of db ≥ 2.0. The HR related to incremental PRBC transfused volumes approached significance for each 15 mL/kg (HR = 1.11, 95%CI: 1.00-1.23, P = 0.053). However, when the NEC cases were excluded, the transfusion effect on db ≥ 2.0 became statistically significant (P = 0.026). 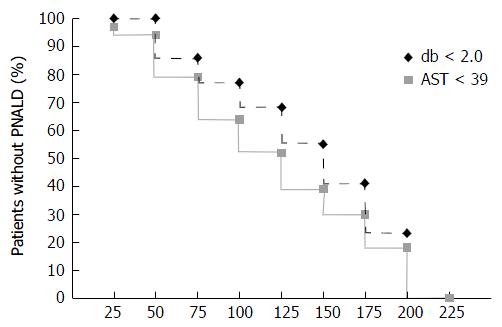 Five of the 49 infants in our study developed NEC. Of these five infants, three also had culture proven sepsis, and two of these three exhibited PNALD. Of the two infants with NEC but without sepsis, both demonstrated PNALD. Overall, 11/17 study subjects with culture proven sepsis demonstrated PNALD. Employing elevated transaminases, AST and ALT, to define PNALD yielded results similar to those based on db ≥ 2.0. PNALD was seen in 67% of the cohort based on AST elevations and in 41% based on ALT elevations. Of the 33 infants with AST-defined PNALD, 70% were in the high transfusion and 30% were in the low transfusion cohorts. Similarly, among the cohort of 20 infants with PNALD defined by elevated ALT, 75% were in the high transfusion and 25% were in the low transfusion groups. Similarly to db PNALD, the odds ratio for developing PNALD based on high vs low PRBC transfusion was 6.9 (95%Cl: 1.78-26.7) if defined by AST, and was 4.2 (95%CI: 1.21-14.9) if defined by ALT.

Although potentially lifesaving, blood transfusions are associated with risks in the NICU[7,8]. Several studies have attempted to better define indications for transfusion in NICU babies[24,25]. Previous investigations have sought to develop transfusion protocols, to achieve an acceptable balance between the risks and the benefits of transfusing preterm infants[1,7,25]. The PINT trial concluded that a higher hemoglobin threshold for transfusions in the NICU resulted in a greater number of transfusions without any added benefit, when compared to a restricted hemoglobin threshold[26]. In the present review of 49 premature infants on TPN, transfusion of ≥ 75 mL PRBC represented a significant risk factor for developing PNALD. If this relationship is confirmed in larger studies, the potential benefits of PRBC transfusions could be balanced with the associated risk of developing liver disease.

The pathogenesis of hepatotoxicity secondary to both PRBC transfusions and PN includes injury secondary to the generation of hepatic reactive oxidative stress (ROS)[26-30]. Since no effective mechanisms allow for excretion of parenteral iron, repeated transfusions can yield secondary Iron overload[27]. The primary sites for iron overload toxicity are those tissues where iron is stored, with liver being the main target[28]. One of the most important recognized mechanisms of liver injury in this setting is free radical mediated oxidative damage[29]. Preterm infants are especially vulnerable to this insult, as a higher proportion of their iron remains unbound to transferrin, leading to increased ROS[30]. Malonylaldehyde (MDA), a byproduct of hepatic ROS, has been employed as a marker of oxidative stress. Elevations of this compound are associated with chronic transfusion states, such as thalassemia and sickle cell disease[31]. Emerging evidence has also implicated oxidative damage as a factor in PNALD[32,33]. Animal models of PNALD using weanling rat[32] and infant rabbit[33] have correlated severity of liver injury and hepatic MDA content with time on PN.

Several important limitations are associated with this pilot study. This retrospective analysis involved a relatively small number of representative NICU patients. Additionally, the cohort was heterogeneous, as subjects were included over a wide range of gestational ages. Other potential comorbidities, previously identified as PNALD risk factors, were unable to be controlled. If this small study group were to be further subdivided, the numbers would not provide meaningful data. Finally, because this is a small cohort, the higher PRBC transfusions volumes associated with PNALD may actually be secondary to coexisting conditions which are the true primary risk factors for this condition.

In conclusion, our pilot study supports the hypothesis that repeated PRBC transfusions increase the risk of PNALD in NICU infants. This preliminary observation is being presented to stimulate further studies employing larger NICU databases. Access to this information could yield a series of well-defined PRBC transfusion recommendations and/or guidelines based on specific characteristics in this vulnerable cohort.

Parenteral nutrition is commonly associated with liver disease in the neonatal intensive care unit (NICU). There are a variety of factors that have been described as risk factors for this problem including prematurity, time on parenteral nutrition, sepsis, prolonged periods without enteral nutrition and necrotizing enterocolitis. Packed red blood cells transfusions which can generate reactive oxygen species especially in the livers of premature neonates are a potential trigger for this morbidity.

Whether the transfusion of packed red blood cells is an actual contributor to the incidence of cholestatic liver disease in the NICU infant receiving parenteral nutrition has not been systematically investigated.

This retrospective pilot study compared a cohort of NICU infants on parenteral nutrition who had received more than the median volume of packed red blood cell transfusions to a second cohort from the same nursery at the same time who received less than the median value. Higher volumes of transfusion led to a statistically significant increase in the prevalence of liver disease in this study as defined by elevated direct bilirubin, by elevated aspartate transaminase and by elevated alanine transaminase.

This preliminary observation should now be investigated in larger cohorts of NICU infants. If these results are confirmed, then guidelines addressing the safety of packed red blood cell transfusions in the NICU can be developed.

A small and succinct study, while it has some limitations, which are well acknowledged by the author. There are some interesting and statistically significant within this study.