Glaucoma refers to a group of diseases characterized by optic neuropathies that are commonly associated with degeneration of the retinal ganglion cells. Although intraocular pressure (IOP) is the only proven treatable factor, several studies indicate that other factors are involved in the pathogenesis of glaucoma. Since normal tension glaucoma (NTG) is the most common glaucoma at least in Japan and South Korea, development of new therapeutic strategies for glaucoma, besides reduction of IOP, is crucial. The clinical characteristics and mechanisms underlying neuronal degeneration in Alzheimer’s disease, a progressive neurodegenerative disease, are similar to those of glaucoma. Impaired cerebral blood flow (CBF) is common to both these diseases; therefore, improving CBF may be considered a new treatment for glaucoma, especially for NTG. In addition, targeting the formation and aggravation pathway for amyloid-β and administration of apolipoprotein E-containing lipoproteins may be potential strategies for glaucoma treatment.

Glaucoma refers to a group of diseases characterized by optic neuropathies that are commonly associated with degeneration of the retinal ganglion cells (RGCs)[1,2], which results in a characteristic optic nerve head (ONH) appearance and corresponding visual field defects. Global surveys indicate that glaucoma is the second leading cause of visual impairment, next to cataract[3]. Normal tension glaucoma (NTG) is the most common type of glaucoma at least in Japan and South Korea[4,5]. Currently, although intraocular pressure (IOP) is the only proven treatable factor for glaucoma, neuroprotection is increasingly being considered as a treatment strategy for glaucoma[6-8].

Alzheimer’s disease (AD), a representative neurodegenerative disease, is one of the most common causes of dementia. Hallmarks of AD include extracellular amyloid-β plaques and intracellular neurofibrillary tangles comprising abnormally phosphorylated tau protein[9,10]. The ε4 allele of apolipoprotein E (APOE) has been found to be a major genetic risk factor for AD[11].

In this review, the association of glaucoma with AD is summarized; then, based on their common pathophysiology, probable therapies for glaucoma are presented briefly.

ASSOCIATION OF GLAUCOMA WITH AD

Several reports have documented the clinical association of glaucoma with AD. Bayer et al[12] showed that patients with AD may have a significantly increased incidence of glaucoma and that ocular hypertension with normal visual fields and normal ONHs was not found in patients with AD, suggesting that the optic nerve seems to be less resistant to elevated IOP levels in AD patients[12]. Tamura et al. also found that the prevalence of open-angle glaucoma was significantly higher in AD patients than in controls[13]. Parisi reported a similar correlation between morphological and functional retinal impairment in patients with glaucoma and those with AD[14].

In addition, a decrease in amyloid-β (1-42) and an increase in tau were found in the vitreous fluid from patients with glaucoma, similar to the findings in the cerebrospinal fluid from patients with AD[15]. Others also reported the involvement of amyloid-β in animal models of glaucoma[16-19]. For example, in a rat model of chronic ocular hypertension, the RGCs demonstrated caspase activation and abnormal processing of amyloid precursor protein (APP), which includes production of amyloid-β[16]. Furthermore, APP and amyloid-β were increased in the RGC layer of DBA/2J glaucomatous mouse eyes[17]. APP and amyloid-β were also found to be highly expressed in the RGC layer of ocular hypertensive C57BL/6 mouse eyes[18]. Moreover, upregulation of amyloid-β was induced in the retina and ONH of a monkey model of chronic ocular hypertension[19].

Several reports implicate APOE in the pathogenesis of glaucoma, specifically NTG. A genetic study indicated that inheritance of the APOE Ε4 allele is associated with elevated risks for glaucomatous changes that are not related to increased IOP[20]. Other genetic studies indicated that APOE-promoter single-nucleotide polymorphisms affect the phenotype of primary open-angle glaucoma and may be associated with a risk of glaucoma occurrence[21,22]. A recent report also revealed that patients with open-angle glaucoma had higher aqueous levels of multiple biomarkers of AD, including APOE, than did cataract patients[23].

Studies using single-photon emission computed tomography (SPECT) have indicated that CBF reductions were most common in the temporoparietal regions in AD patients[24]. Disturbed CBF has been reported not only in AD patients but also in glaucoma patients. Compared to controls, glaucoma patients were found to have a lower blood velocity in the middle cerebral artery (MCA) and an absence of vasoreactivity to hypoxia[25]. The MCA supplies blood to the anterior temporal lobes where blood flow is reduced in AD patients. In addition, the same group found a significant correlation between blood velocity in the MCA and central visual function measured by foveal cone electroretinograms and the visual field[26]. This finding suggests that diminished central visual function may be a manifestation of widespread cerebrovascular insufficiency in certain patients with glaucoma. Another group also reported enhanced transmission of oscillations in the mean arterial pressure onto CBF in patients with glaucoma including NTG[27]. They suggested that impaired cerebral autoregulation might contribute to an increased risk of cerebrovascular disorders in glaucoma patients. 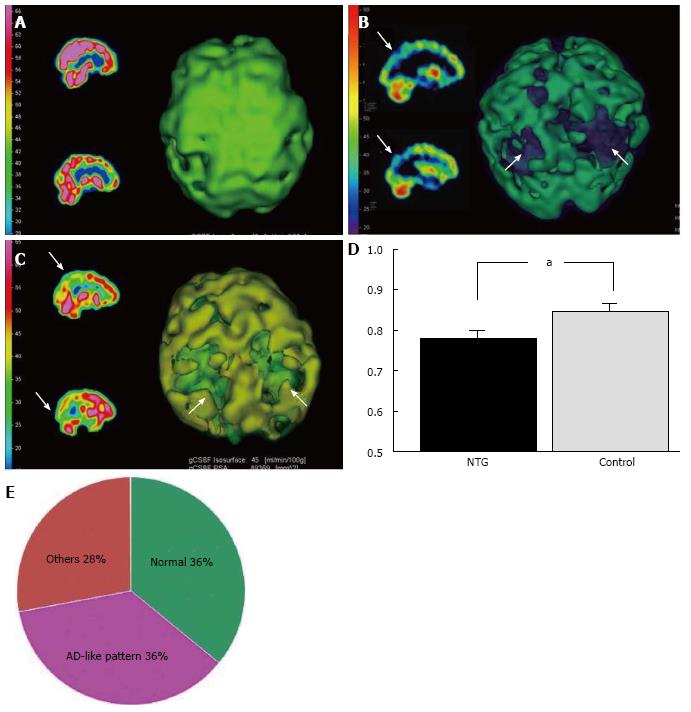 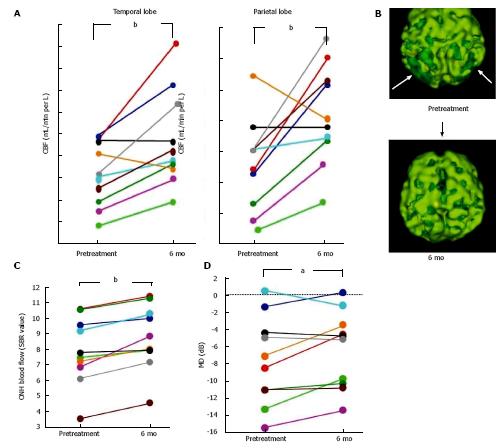 Several types of recent or new therapeutic strategies for glaucoma have been suggested on the basis that similar pathological mechanisms underlie neuronal death in both AD and glaucoma. One such strategy is α-2 adrenergic receptor activation: compensating for common loss of noradrenergic innervation of RGCs and central neurons in glaucoma and AD[30]. A recent randomized, double-masked, multicenter clinical trial showed that NTG patients treated with an α-2 adrenergic receptor agonist brimonidine were less likely to show progression in visual field defects than were patients treated with timolol[31].

On the other hand, another report suggested that targeting different components of the formation and aggravation pathway for amyloid-β could be effective in reducing glaucomatous RGC apoptosis in vivo[32]. Several studies have reported the protective effects of an anti-AD drug donepezil (an acetylcholinesterase inhibitor) on RGC death in vitro and in vivo[33,34]. One of them suggested that not only the activation of acetylcholine receptors but also a mechanism unrelated to acetylcholinesterase inhibition might contribute to the protective effect of donepezil[34].

Recently, it was reported that administration of APOE-containing lipoproteins protected RGCs from glutamate-induced apoptosis in vitro and partially protected RGCs from neurodegeneration in glutamate aspartate transporter-deficient mice, which exhibit many features similar to human NTG[35].

In conclusion, eliciting the relevance of AD when considering the pathogenesis of glaucomatous optic neuropathy may provide novel therapeutic strategies for protecting the optic nerve in glaucoma.

I would like to express my appreciation to Professor Tsunehiko Ikeda for giving me the opportunity to study this topic and to continue investigating it at the Department of Ophthalmology at Osaka Medical College until March 2013, and Dr. Keita Utsunomiya for collaborating with me during the SPECT study.