AIM: To evaluate the efficacy and safety of laser-assisted subepithelial keratectomy (LASIK) for myopic correction done under thin flaps (120 μm) and compare with results obtained under thick flaps (150 μm).

Recent reports of post-laser-assisted subepithelial keratectomy (LASEK) ectasia have produced a renewed interest in surface ablation techniques, such as photorefractive keratectomy, LASEK and Epi-LASIK, to eliminate the need to perform a corneal flap and to preserve a thicker stromal bed less prone to mechanical destabilization[1]. Despite good refractive results, surface techniques are associated with greater pain, discomfort, and slower visual recovery in the immediate postoperative period.

The purpose of the present study was to evaluate the efficacy, safety, and stability of LASIK for myopic correction done under thin flaps and compare the results with those achieved with thick flaps using the Moria M2 microkeratome and the Allegretto wave eye Q excimer laser.

All procedures in this prospective, randomized, double-masked, controlled clinical study were performed in Mansoura Ophthalmic Center, Mansoura, Egypt. Patients included in the study were given a detailed explanation of the procedure and the risk/benefits of laser refractive surgery. Visual, verbal, or written informed consent was obtained from each patient. This study was approved by the human subjects committee and was performed in accordance with the Declaration of Helsinki (1989) of the World Medical Association.

The study included 150 eyes of 75 patients having spherical myopia, simple or compound myopic astigmatism without a history of previous refractive surgery. The mean age of the patients was 31 ± 9.2 years (range, 18-44 years). Forty-five patients were females and thirty patients were males.

Inclusion criteria were: (1) stable refraction for at least one year; (2) absence of any ocular pathology or surgical complications that might compromise the final visual outcome; (3) normal tear film with absence of dry eye; and (4) best-corrected visual acuity of 6/6 or 6/9 preoperatively.

Data of the operated eye were introduced into the computer of the excimer Laser machine. The calculated treatment data included optic zone, ablation zone, ablation depth and residual stromal depth. They were selected on the basis of the degree of refractive error, central corneal thickness, and microkeratome head used so as to achieve postoperative emmetropia with a minimum residual stromal bed depth of 275 μm[6].

The surgical procedure was performed with benoxinate hydrochloride 0.4% eye drops. The Moria M2 automated microkeratome (Moria, Antony, France) was used in all cases. Two heads (90 and 130) were used to create a flap thickness of 120 μm and 150 μm in the thin and thick flap groups, respectively. In all cases the standard speed (speed 2) was used. Suction rings and stop were used according to the M2 microkeratome nomogram on the basis of the keratometric readings. Superior hinged flap was created. After the cut, suction was released and the corneal flap was lifted with a spatula. The ablation was performed in the stromal bed using the Allegretto wave eye Q excimer laser (Wave-light, Amswolfsmantel, Erlanger, Germany). The corneal flap and hinge were irrigated with balanced salt solution and the flap was gently repositioned and stretched onto the eye. A therapeutic contact lens (Acuvue, base curve 9.1 m) was applied for corneal flap protection.

Postoperative treatment involved topical moxifloxacin 0.5% and prednisolone acetate 1% eye drops four times daily for 1 wk together with artificial tears eye drops three times per day for 6 wk. Gradual withdrawal of topical steroids was done over 2 wk. Patients were followed up postoperatively at first week, and then every month until 12 mo.

Patients’ data were recorded at each postoperative examination. To minimize bias all measurements were taken by the same examiner, who was masked with regard of two groups.

Refractive outcome: Stability of the surgical procedure was measured as the percentage of eyes with postoperative manifest refractive spherical equivalent within ± 1.0 diopter at the end of follow-up period[7].

Data were collected and analyzed using the Statistical Program for the Social Sciences (SPSS) software (version 15; SPSS, Chigao, IL, United States). The quantitative variables were expressed as range or mean ± SD . Student t test was used to compare the quantitative data of the two groups while chi-square test was used to compare qualitative frequencies. A P value of less than 0.05 was considered to be statistically significant.

Table 1 shows the preoperative data by group. There were significant differences between the thin (120 μm) and thick (150 μm) flap groups regarding pachymetry (thicker corneas had thicker flaps) and keratometric value (steeper cornea had thicker flaps). Although thin flaps were associated with higher degree of sphere and spherical equivalents to be corrected, the differences were insignificant. 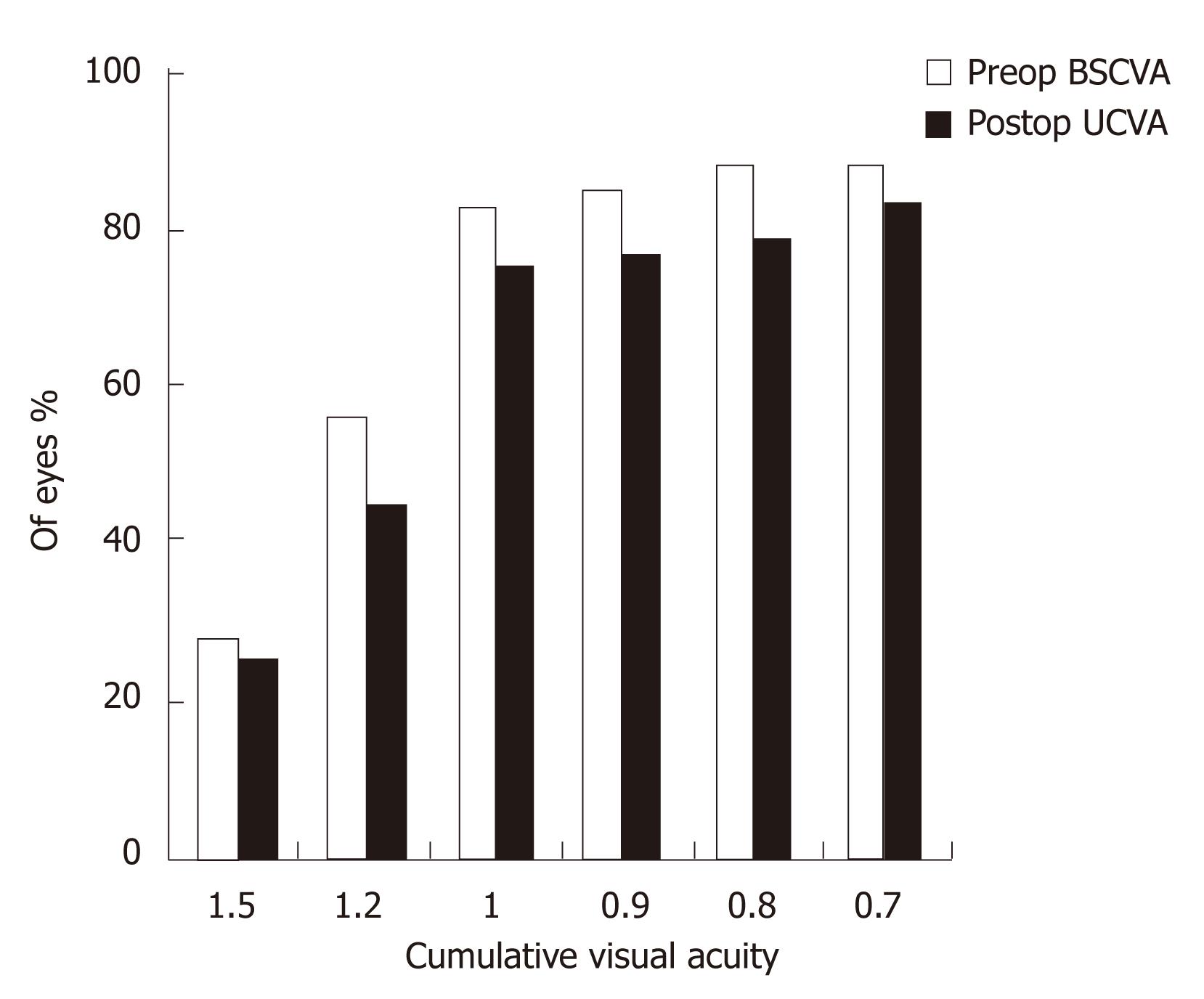 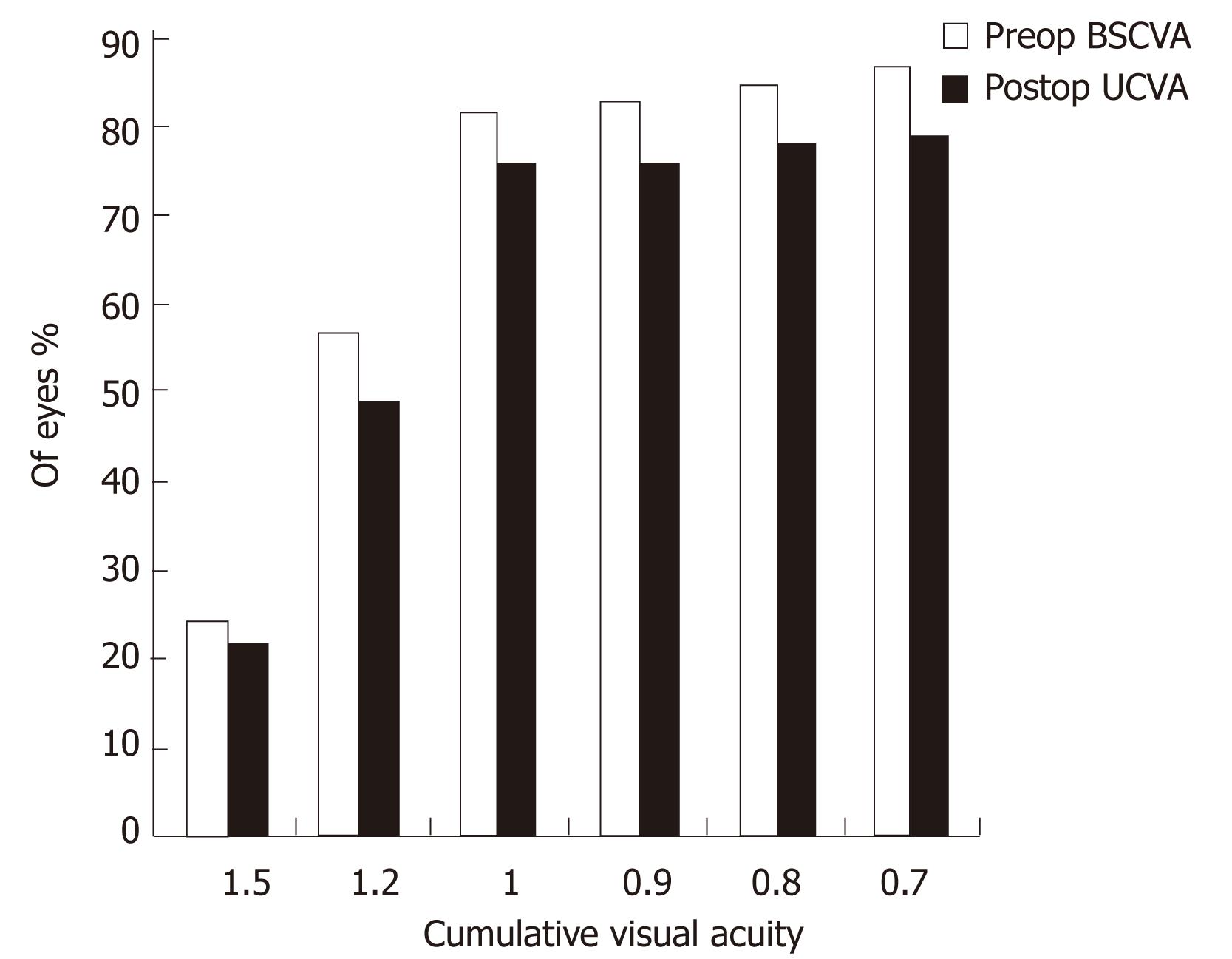 Seventy-one eyes in the thin flap group achieved the preoperative BCVA with efficacy percentage of 94.8% as compared to 90.8% in the thick flap group (67 eyes). This difference was statistically significant (P < 0.05). Three month postoperatively, all the operated eyes had UCVA equal to the preoperative BCVA in the two groups with efficacy percentage of 100% (Table 2). 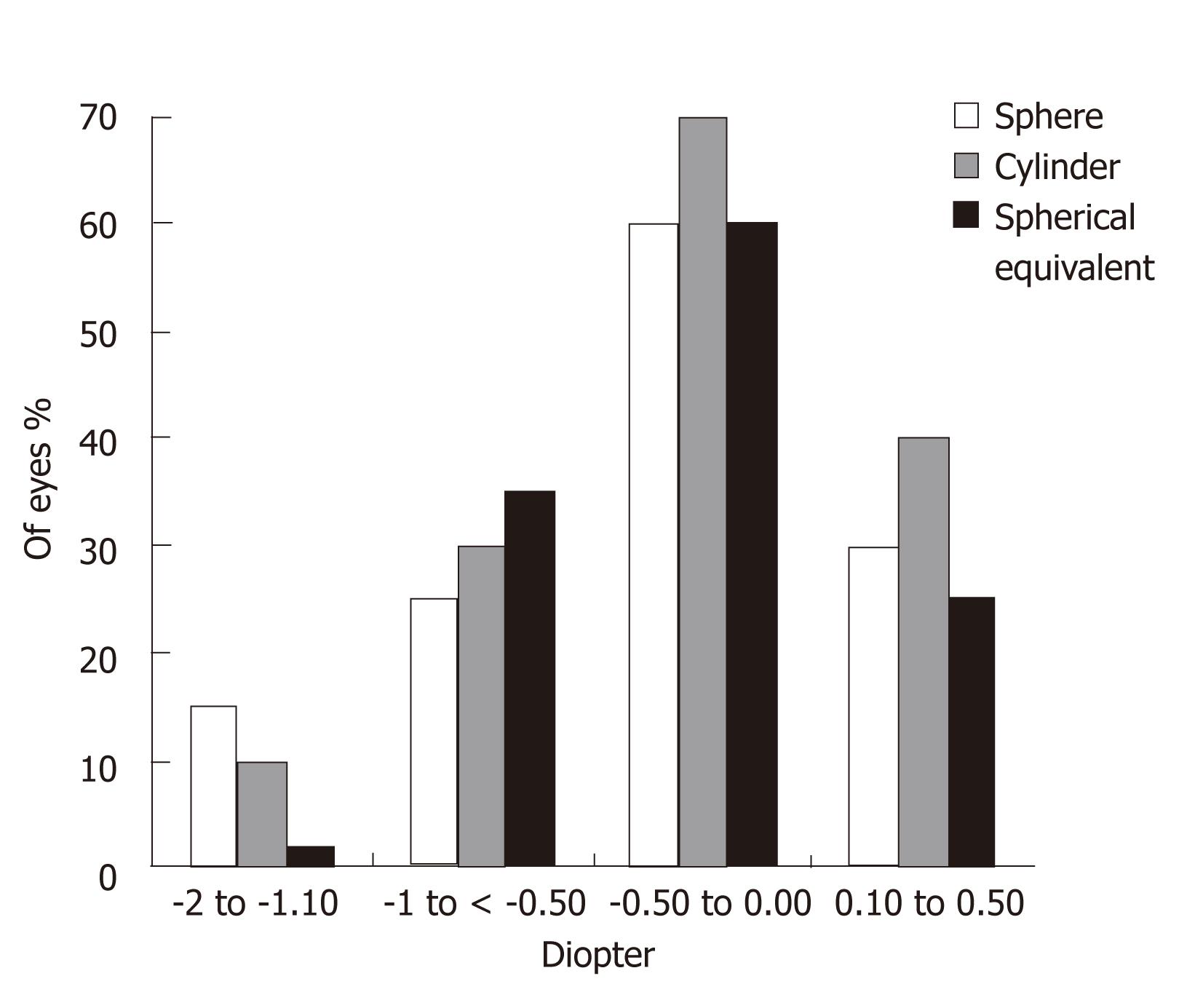 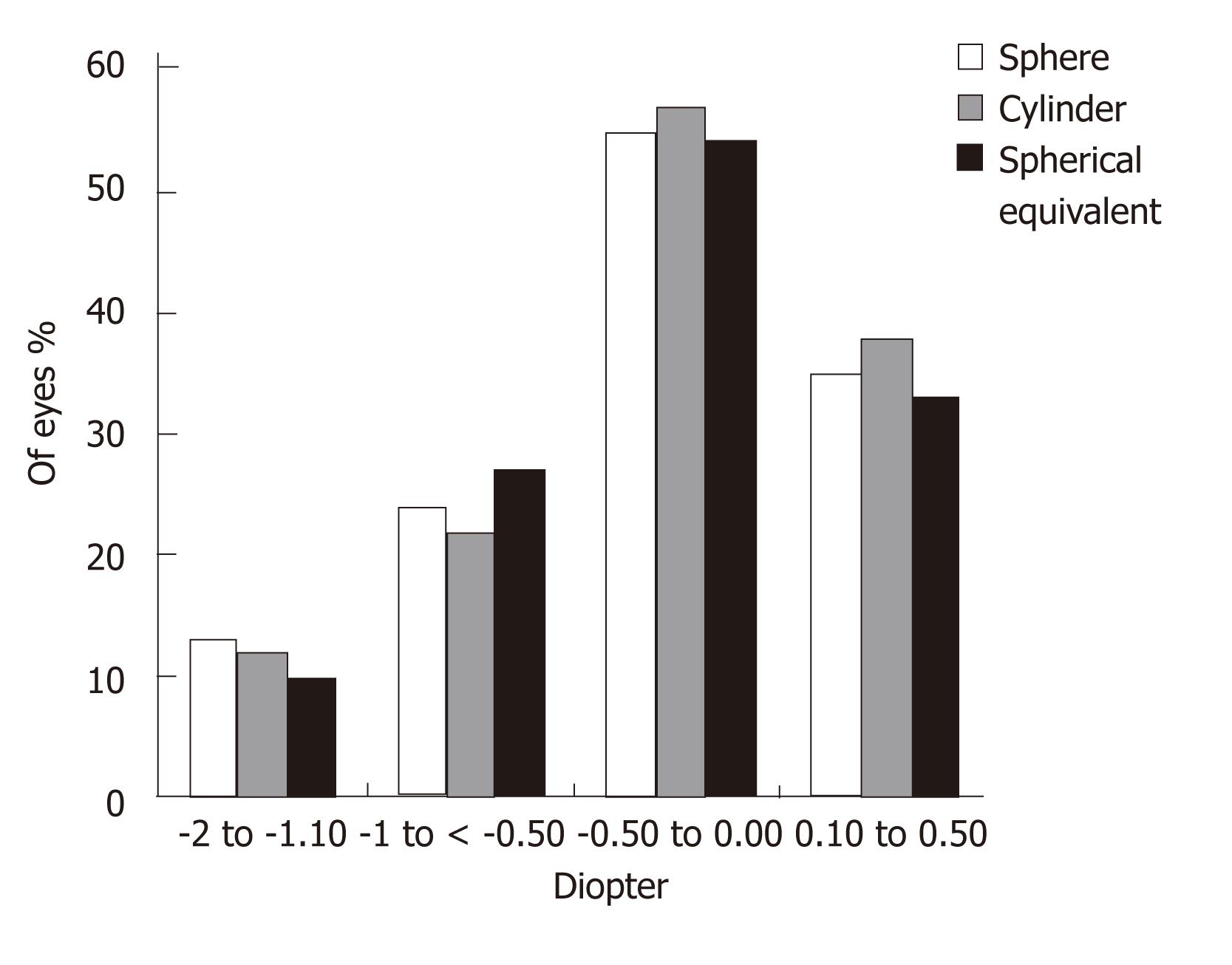 Enhancement was performed in only eight eyes (5.3%) 12 mo after LASIK in the study. Though insignificant, the thin flap group had a lower rate of enhancement (3 eyes, 4.0%) than the thick flap group (5 eyes, 6.6%).

There were no intraoperative complications, especially flap-related problems such as free or incomplete flap or flaps with button-holes. No postoperative complications occurred. Subjective symptoms of dry eye such as dryness, blurring of vision, and foreign body sensation occurred in 20.7% (20) of eyes in the thin flap group and 33.3% (25) of eyes in the thick flap group. However, these symptoms were transient and disappeared after the use of lubricant eye drops and gel.

Flap thickness is a parameter in modern LASIK surgery. Innovations in excimer laser technology have improved the optical quality of the excimer laser profile. Together with the increasing use of the femtosecond laser, this has initiated the impact of flap thickness on the outcomes of LASIK.

Ectasia following LASIK surgery has been reported numerous times in ophthalmic literature, and predictability of flap thickness plays an important role in that risk[8,9]. Thin-flap LASIK is becoming more routine as refractive surgeons and patients continue to pursue the rapid healing advantages of LASIK but wish to minimize the risk for ectasia.

Studies evaluating the effect of corneal flap thickness on LASIK outcomes report conflicting results. Yi et al[10] found slightly better visual outcomes in the thick-flap group (> 165 μm) than in the thin-flap group (< 135 μm). Yeo et al[2] observed a higher incidence of central corneal opacity after LASIK with thin flaps (mean thickness 88.89 ± 8.07 μm). A possible explanation is injury to Bowman’s layer by the blade or a hidden masked buttonhole, camouflaged by intact epithelium, which may have caused central corneal scarring. The reason for the better outcomes achieved by thick-flap LASIK in these studies seems to be that the thin flap was an unintended complication; hence, it may have been irregular.

Other advantages exist for thin-flap LASIK beyond the decreased risk for corneal ectasia. Anatomically, the anterior stroma is more compact[12], creating a smooth flap interface and anterior stromal bed surface, which is quite noticeable intraoperatively under the laser microscope. Thinner flaps have less edema[13] and are more easily stretched back into position to minimize or eliminate microstriae. This lessens the gap noted at the outer edge of the flap.

Theoretically, less flap bulk should allow better adherence of the flap created by the endothelial pumping mechanism, and this may lessen the risk for flap slippage and macrostriae. A smaller gap may also translate into less risk for epithelium in growth. Terminal corneal nerve bulbs are cut closer to the epithelial surface and they are fewer in number in thin flap, thus requiring less nerve regeneration and perhaps inducing fewer dry eye problems than in thick-flap LASIK[4].

Although corneal sensitivity was not measured in the present study, the incidence of subjective dry eye symptoms was lower in the thin flap group than in the thick flap group. Esquenazi et al[7] found no differences in these symptoms among their three groups.

In summary, despite the conventional LASIK procedure used in this study, thin-flap LASIK is an effective and safe technique to correct myopic defects since it blends the advantages of surface procedures with the rapid and comfortable visual recovery of lamellar approaches. It achieves better visual results, more rapid visual postoperative recovery, stable postoperative refraction with better residual spherical equivalent, low degree of astigmatism, and a lower rate of enhancement than LASIK with thicker flaps. The accepted concept is that the main reason for creating thinner flaps is to have stronger corneas with wider ablations that provide higher vision quality and not to extend the range of power correction.

The authors thank Taha Baker for his care and diligence during writing the paper.

To evaluate the efficacy, safety, and stability of laser-assisted subepithelial keratectomy (LASIK) for myopic correction done under thin flaps and compare the results with those achieved with thick flaps. LASIK is still the main refractive procedure performed because of its rapid and comfortable visual rehabilitation, good refractive stability, and lower potential for haze formation.

Despite the conventional LASIK procedure used in this study, thin-flap LASIK is an effective and safe technique to correct myopic defects since it blends the advantages of surface procedures with the rapid and comfortable visual recovery of lamellar approaches. It achieves better visual results, more rapid visual postoperative recovery, stable postoperative refraction with better residual spherical equivalent, low degree of astigmatism, and a lower rate of enhancement than LASIK with thicker flaps. The accepted concept is that the main reason for creating thinner flaps is to have stronger corneas with wider ablations that provide higher vision quality and not to extend the range of power correction.

The paper is interesting and readable.