AIM: To answer some questions related to the problem of ovarian simple cysts in asymptomatic postmenopausal women.

METHODS: A literature search and systematic review using MEDLINE (PubMed) database from 1980 to 2014 was performed using the following terms: “simple cyst”, “postmenopause”, “postmenopausal”, “ultrasound”, “ovary”, “ovarian”, “asymptomatic”. Papers not related to the topic, reviews, letters to editor, opinion letter, commentaries and studies published in non-English language were excluded. Two authors then reviewed the full paper of all the studies initially selected. This review does not claim to be a meta-analysis. Therefore, meta-analysis statistics were not applied and PRISMA guidelines were not strictly followed. Simple descriptive statistics were used providing absolute numbers and corresponding percentages as well as range.

RESULTS: Nine papers were ultimately included in this review, accounting for 98899 postmenopausal women. We have found that ovarian simple cysts are relatively common in asymptomatic postmenopausal women (prevalence: 8.7%). The risk of malignancy is very low (0.19%). More than 90% of these cysts were smaller than 5 cm. Bilaterality rate ranged from 3.7% to 15%. Histologically, most cysts are serous cystadenomas (61%). When managed conservatively, a significant number resolve spontaneously (46.1%) or remain unchanged (39%).

CONCLUSION: According to these data, conservative management should be the first option to offer to these women.

Core tip: The problem of ovarian simple cysts in asymptomatic postmenopausal women remains a controversial issue in gynecological practice. We have performed a literature review about this topic. We have found that ovarian simple cysts are relatively common in asymptomatic postmenopausal women. The risk of malignancy is very low. Histologically, most cysts are serous cystadenomas. When managed conservatively, a significant number resolve spontaneously or remain unchanged.

The management of adnexal simple cysts in asymptomatic postmenopausal women remains a controversial issue in gynecological practice. Albeit management of these lesions has certainly evolved from a systematic surgical removal to a more conservative approach[1], many gynecologist are still reluctant to advise such a conservative management.

Some issues regarding to this entity remains unresolved such as the lesion’s size above which surgery should be advised, the risk of torsion, what factors are associated with the appearance of this lesion and for how long follow-up should be performed in case of conservative management and which control periodicity should be advised, what factors are associated to the appearance of this lesion. Most importantly, if the lesion is left in situ, which is the actual risk for developing a malignancy?

A systematic review of the literature in MEDLINE (PubMed) database was performed by one of the authors (JLA) from 1980 to 2014 was performed using the following terms: “simple cyst”, “postmenopause”, “postmenopausal”, “ultrasound”, “ovary”, “ovarian”, “asymptomatic”. This author screened titles and abstracts and excluded those papers not related to the topic, reviews, letters to editor, opinion letter, commentaries and studies published in non-English language.

Two authors (JLA, NM) then reviewed the full paper of all the studies initially selected according to the following criteria:

Exclusion criteria: (1) Sample size < 50 women; (2) Incomplete data about patients characteristics, follow-up, histology and malignancy rate; and (3) Ultrasound performed by transabdominal route. We decided exclude these studies because of the possibility of missing papillary projections using this route is higher and some not truly simple cysts could be as such. Disagreement between reviewers was solved by consensus.

Additionally, since this is a review Institutional Review Board was waived.

A total of 79 papers were found after database search. First screen excluded 62 papers for the following reasons: paper not related to the topic (n = 42), review paper (n = 12), letter to editor or commentary paper (n = 4) and non-English language (n = 4).

Therefore, nine papers were ultimately included in this review[3-11].

What should be considered as an ovarian simple cyst? 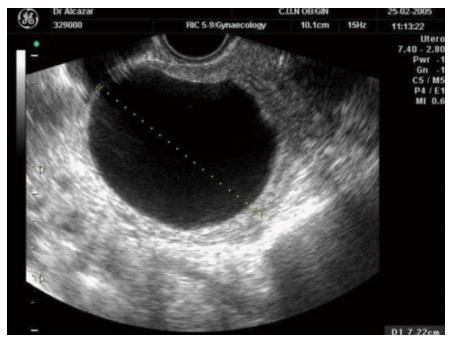 Figure 1 Transvaginal ultrasound showing an ovarian simple cyst as a round anechoic thin-walled cyst with no irregularity on the internal wall. 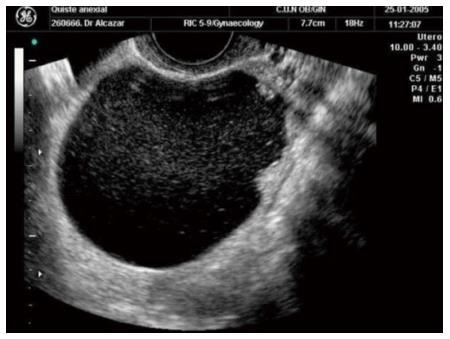 Figure 2 Transvaginal ultrasound showing a lesion that should not be considered as simple cyst, since papillary projection can be seen arising from the wall.
What is the prevalence of ovarian simple cysts in asymptomatic postmenopausal women?

Which are the characteristics of ovarian simple cysts?

Bilaterality rate was reported in three studies[8-10], ranging from 3.7% to 15%. Moreover, three or more cysts in the same woman has been reported in 5% of the cases[10].

What are the factors associated with the appearance of simple cysts?

Three studies have evaluated factors that could be associated to with the appearance of ovarian simple cysts in postmenopause.

Modesitt et al[8] reported that these lesions appeared more frequently in women under hormone replacement therapy (either estrogens alone or estrogens plus progestins) and in women with recent menopause.

Greenlee et al[10] performed a more exhaustive analysis in a large population. They found that ovarian simple cysts were associated with age (the younger the woman the higher the risk for simple cyst), non-smoking, previous history of surgery for benign gynecologic condition, previous history of ovarian benign cyst, higher education, precocious menopause and first pregnancy before 20 years old. No association was found with use of hormone replacement therapy, use of hormonal contraception, parity or history of infertility.

What is the natural history of these lesions if conservatively managed?

Data about the natural history of ovarian simple cysts in asymptomatic postmenopausal women on follow-up has been reported in eight studies[3-6,8-11]. The mean follow-up ranged from 18 to 71 mo.

Ovarian simple cysts resolved spontaneously in almost half of the cases (46.1%). Spontaneous resolution rate ranged from 0% to 69.4%, depending on the study.

What is the most frequent histology in those surgically removed?

Detailed data about histology of surgically removed cysts were reported on six studies[3,5-9]. The total number of cysts removed was 525. Three hundreds and thirty-six were removed after diagnosis and 189 during follow-up. Only on study reported median time elapsed from diagnosis up to removal (27 mo)[9].

What is the risk of developing a malignancy?

What are the features associated to malignancy?

This is probably the most interesting question. However, the information provided in the studies evaluated for this mini-review is scanty. From data reported from three studies[7,9,11] including eight ovarian cancers, we observed that most of them (6/8) were stage I and in 5/8 the size of the cyst was < 5 cm in 5 out of 8 cases.

Those studies that reported data about CA-125 during follow-up reported no significant changes of this tumor marker during follow-up, even in those cases with sonographic changes in the ovarian simple cyst[3-5]. In the study by Castillo et al[9], there was one case of ovarian malignancy. In this case CA-125 raised during follow-up (45 UI/mL).

In this systematic review, we have addressed the issue of ovarian simple cysts in asymptomatic postmenopausal women.

Transvaginal ultrasound route is essential for ascertaining that the lesion is actually a simple cyst, since small papillary projections might be missed using transabdominal ultrasound[14].

Patient’s characteristics consistently associated with the presence of a simple ovarian cyst in postmenopausal women are age and previous history of pelvic or gynecologic surgery. This, in fact, is not surprising since younger postmenopausal women may have residual ovarian activity and many of these simple cysts could be “functional cysts” developed from this residual activity. This fact may also explain why the probability of spontaneous resolution is higher in women with recent menopause. On the other hand, previous pelvic surgery increases the risk of peritoneal cysts that may resemble ovarian simple cysts.

No study reported data about complications such as torsion or rupture. Therefore, albeit it is not possible to draw definitive conclusions regarding these complications. However, it seems that they are uncommon in ovarian simple cysts during the menopause.

Additionally no study reported information about when and for how long follow-up should be performed in those cysts that had not resolved spontaneously.

Regarding surgery in most studies there is no data reported about the surgical approach. The authors think that laparoscopic cyst removal should be the best approach when surgery is decided[15].

Postmenopausal simple cysts in asymptomatic women management remains as an unsolved issue in gynecological practice. This is relevant because of surgery has been traditionally performed. However, recent data challenge this concept showing that conservative management should be offered to these women.

A number of papers have been published addressing this question in the last fifteen years. However, adequate systematic reviews are lacking.

The paper offers an updated systematic review about this topic. According to the authors’ findings in this mini-review, it could be assumed that ovarian simple cysts are common in asymptomatic postmenopausal women. The risk of malignancy is very low and having a simple ovarian cyst does not seem to increase the risk of developing an ovarian cancer. Many of them will resolve spontaneously or will remain unchanged during follow-up. The role of CA-125 at diagnosis and for following-up remains to be determined. Data about the use of CA-125 are scanty in the studies reviewed. Most studies used CA-125 as inclusion criteria and during follow-up. In most cases CA-125 did not change, even in those cysts that changed during follow-up. Only in one case of carcinoma the value of CA-125 was reported as elevated. In the authors’ opinion, the role of routine CA-125 assessment in the follow-up of postmenopausal ovarian simple cyst would be arguable. The authors’ review has some limitations. First, the authors did not perform a formal meta-analysis. Therefore, conclusions based on statistical inferences cannot be drawn. Second, the number of studies included is small. Third, studies are considerably heterogeneous in design and data reported. However, some questions remain unanswered and future research is needed to try to answer these questions: (1) Which cysts are at higher risk for developing a malignancy? (2) Is follow-up needed for these lesions? (3) For how long these cysts should be followed-up? and (4) Which follow-up protocol should be implemented?

The results of the analysis may have a relevant clinical impact since the authors have shown that ovarian simple cysts are common in asymptomatic postmenopausal women and the risk of malignancy is very low. These findings should modify the traditional surgical management of these lesions for a more conservative one. However, there is still a room for research since some questions remain unanswered (see above).

This is an interesting manuscript.