The purpose of this paper is to review current information about the role of inflammation caused by Helicobacter pylori (H. pylori) infection in neurological diseases such as Parkinson’s disease, Alzheimer’s disease, Guillain-Barré syndrome, multiple sclerosis, and other inflammatory diseases including ischemic stroke. Infection with H. pylori usually persists throughout life, resulting in a chronic inflammatory response with local secretion of numerous inflammatory mediators including chemokines [interleukin (IL)-8, macrophage chemotactic protein (MCP)-1, growth-regulated oncogene (GRO)-α] and cytokines [IL-1β, tumor necrosis factor (TNF)-α, IL-6, IL-12, interferon (IFN)-γ], which can pass into the circulation and have a systemic effect. The persistence of detectable systemic and local concentrations of inflammatory mediators is likely to alter the outcome of neurological diseases. These proinflammatory factors can induce brain inflammation and the death of neurons and could eventually be associated to Parkinson’s disease and also may be involved in the development of Alzheimer’s disease. However, most neurological diseases are the result of a combination of multiple factors, but the systemic inflammatory response is a common component and determinant in the onset, evolution, and outcome of diseases. However, more studies are needed to allow understanding of the effects and mechanisms by which the inflammatory response generated by H. pylori infection affects neurological diseases.

Core tip: Neurological diseases such as Parkinson, Alzheimer, Guillain-Barré syndrome, multiple sclerosis, and ischemic stroke are the result of a combination of multiple factors, but the chronic and systemic inflammatory response to Helicobacter pylori could be a common component and determinant in the onset, evolution, and outcome of these diseases.

Helicobacter pylori (H. pylori) is a Gram-negative bacterium that chronically infects more than 50% of the human population[1]. It is well known that infection with the bacterium increases the risk of gastric diseases including peptic ulcers and gastric cancer[2,3]. H. pylori is able to infect and live persistently in the human stomach and elicits severe acute and chronic inflammatory responses, which may be of variable magnitude depending on the host’s genetic makeup and lifestyle[4]. Differing inflammatory responses among hosts may help to explain the different outcomes of infection with H. pylori[5]. H. pylori induces infiltration to the gastric mucosa of neutrophils, macrophages, dendritic cells, T and B cells, and stimulates secretion of interleukin (IL)-8, tumor necrosis factor (TNF)-α, IL-6, IL-1β, IL-12, IL-10, and interferon (IFN)-γ[5]. This persistent response causes significant changes in the physiology of the stomach by direct damage to the cells or by regulating cell proliferation and apoptosis (Figure 1). Neutrophils and macrophages release reactive oxygen and nitrogen species, which may induce irreversible changes in the gene expression of cells of the gastric mucosa. The levels of these chemical species decrease when H. pylori infection is eradicated[6]. The secretion of inflammatory mediators is likely to have serious biological implications at the local and systemic level. For example, IL-8 is a chemokine induced early by H. pylori infection. It is a chemoattractant of neutrophils and mediates responses to bacterial infection and to autoimmune disease[7]. IL-6 activates target genes involved in cellular differentiation, survival, apoptosis, and proliferation[8]. IL-6 may perpetuate inflammation by inducing antiapoptotic signals mediated by signal transducer and activator of transcription 3. IL-1β signaling is absolutely necessary for the efficient control of H. pylori infection. IL-1R(-/-) mice failed to developed protective immunity against Helicobacter-associated gastritis and gastric preneoplasia as a result of their inability to generate Helicobacter-specific T helper (Th)1 and Th17 responses[9]. 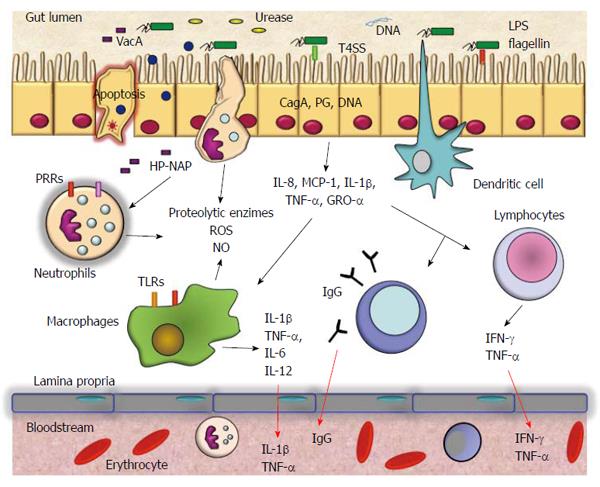 IL-10 is an anti-inflammatory cytokine that inhibits the production of proinflammatory cytokines by inhibition of Th1 lymphocytes and stimulation of B cells and Th2 lymphocytes, and consequently it downregulates the inflammatory response[10]. This cytokine is very important for the maintenance of a balanced response in gastric inflammation. In contrast, IFN-γ mediates responses to bacterial infection and autoimmune disease. It is upregulated in the gastric mucosa by chronic Helicobacter infection[11]. This cytokine is important in the production of gastric acid and its levels are correlated with the damage found in gastritis.

H. pylori infection has been associated with the development and progression of neurological diseases, principally by inducing systemic inflammation, molecular mimicry, and interference with the absorption of drugs. In this review, we summarize the most important research on this issue.

Parkinson’s disease is the second most common neurodegenerative disease worldwide. It is characterized by the accumulation of cytoplasmic proteins, including α-synuclein, which leads to the progressive loss of dopaminergic neurons. The loss of dopaminergic neurons causes the resting tremors, rigidity and bradykinesia that are characteristic symptoms of the disease[12]. H. pylori infection may increase the risk of Parkinson’s disease[13]. The administration of L-3,4-dihydroxyphenylalanine (L-dopa), a precursor of dopamine, is used as a treatment for Parkinson’s disease. H. pylori infection may affect the bioavailability of L-dopa by disrupting the duodenal mucosa, which is the site of primary absorption of L-dopa[14,15]. Recent studies suggested that H. pylori eradication in patients with Parkinson’s disease might improve the bioavailability of L-dopa and reduce motor fluctuations[15-18].

Parkinsonism is a neurological syndrome that shares symptoms found in Parkinson’s disease. It has been suggested that a peripheral immune response characterized by the presence of proinflammatory cytokines such as IL-8, IL-1β, and TNF-α in the bloodstream induces a disruption of the blood-brain barrier and promotes microglia-mediated inflammation and neurotoxicity[19-21]. Several studies have established that that proinflammatory factors associated with chronic gastrointestinal disease can induce brain inflammation and the death of dopaminergic neurons and could eventually be responsible for parkinsonism[22-24]. Dobbs et al[25] proposed that H. pylori infection predisposes to autoimmunity that results in neuronal damage leading to eventual parkinsonism. This was based on the observation of an age-associated increase in the levels of antibodies against H. pylori in Parkinson’s patients, but this association is not clear, and other investigations are required to clarify it.

Guillain-Barré syndrome is an acute inflammatory autoimmune neuropathy, presenting as a progressive motor weakness usually beginning in the legs, and can be triggered by a preceding bacterial or viral infection. Molecular mimicry of host structures by antigens present in the gastrointestinal pathogens Campylobacter jejuni and H. pylori are thought to be connected with the development of the autoimmune sequelae observed in Guillain-Barré syndrome[32,33]. In a case-control study, it was found that serum anti-H. pylori IgG of patients was signiﬁcantly higher than that of controls, that CSF anti-H. pylori IgG was positive in 80% of patients and in 20% of controls and that the CSF IgG titer was also signiﬁcantly higher in patients than controls[34]. Furthermore, specific IgG antibodies to vacuolating cytotoxin A (VacA) of H. pylori have been detected in the CSF of patients with Guillain-Barré syndrome. The sequence homology found between VacA and human ATPase A subunit suggests that antibodies to VacA bind to ion channels in Schwann cells, resulting in demyelination of motor neurons in these patients[35]. Moreover, high levels of serum anti-H. pylori IgG antibodies closely correlate with a more advanced clinical status, and elevation of anti-H. pylori-specific IgG antibodies is associated with involvement of the proximal parts of peripheral nerves in patients with acute inflammatory demyelinating polyradiculoneuropathy, the most commonly observed subtype of Guillain-Barré syndrome[32]. Most studies have included only a small sample, so more research is needed to confirm the association between H. pylori infection and Guillain-Barré syndrome.

The pathophysiologic mechanism for the majority of ischemic strokes is occlusion of carotid or cerebral vessels. Infection with H. pylori as a risk factor for stroke is still an unresolved issue because of conflicting results. However, a recent meta-analysis showed that chronic infection with H. pylori and the presence of CagA-positive strains are statistically significant risk factors for ischemic stroke, especially for noncardioembolic ischemic stroke[38,39]. Similarly, CagA-positive strains of H. pylori are significantly associated with atherosclerotic stroke in patients with an active infection[34].

The mechanisms of the high risk for ischemic stroke conferred by chronic H. pylori infection are still not understood. It has been hypothesized that H. pylori activates platelets and affects coagulation, and it has been shown that six months after eradication of H. pylori infection, the plasma levels of total cholesterol, low-density lipoprotein-cholesterol, fibrinogen, and IL-8 were significantly lower than those in H. pylori-positive stroke patients and controls[40].

Most neurological diseases are the result of a combination of multiple factors, but the systemic inflammatory response and the production of autoantibodies are common components and determinants in the onset, evolution, and outcome of these diseases. Future studies need to focus on determining the molecular mechanisms by which inflammatory mediators induced by H. pylori act on the brain, tipping the balance toward a pathological condition.