Eosinophilic granulomatosis polyangiitis (EGPA) is a small vessel necrotizing vasculitis that commonly presents as peripheral eosinophilia and asthma; however, it can rarely manifest with cardiac involvement such as pericarditis and cardiac tamponade. Isolated pericardial tamponade presenting as the initial symptom of EGPA is exceedingly rare. Early diagnosis and appropriate treatment are crucial to prevent life-threatening outcomes.

52-year-old woman with no past medical history presented with progressive dyspnea and dry cough. On physical exam she had a pericardial friction rub and bilateral rales. Vital signs were notable for tachycardia at 119 beats per minute and hypoxia with 89% oxygen saturation. On laboratory exam, she had 45% peripheral eosinophilia, troponin elevation of 1.1 ng/mL and N-terminal prohormone of brain natriuretic peptide of 2101 pg/mL. TTE confirmed a large pericardial effusion and tamponade physiology. She underwent urgent pericardial window procedure. Pericardial and lung biopsy demonstrated eosinophilic infiltration. Based on the American College of Radiology guidelines, the patient was diagnosed with EGPA which manifested in its rare form of cardiac tamponade. She was treated with steroid taper and mepolizumab.

Core Tip: (1) To be able to investigate the etiology of pericardial effusion and cardiac tamponade with eosinophilia which is rarely caused by eosinophilic granulomatosis polyangiitis (EGPA); (2) To be mindful that anti-neutrophil cytoplasmic antibody is negative in EGPA with cardiac involvement rather than pulmonary or renal involvement; (3) To be aware that when isolated pericardial involvement leading to cardiac tamponade occurs, diagnosis is recognized by performing pericardial biopsy demonstrating histopathologic evidence of eosinophilic infiltration; (4) To consider early diagnosis of EGPA with cardiac involvement is crucial because it carries a major burden of morbidity and mortality; (5) To initiate early treatment with corticosteroids when an isolated pericardial involvement is present whereas immunosuppressants are utilized with multiorgan involvement; and (6) To conduct close surveillance in the outpatient setting to monitor the response to treatment and maintenance medications such as steroids and monoclonal antibodies.

Eosinophilic granulomatosis polyangiitis (EGPA) is a systemic necrotizing vasculitis with eosinophilic infiltrates of the small to medium vessels and extravascular granulomas, first described by Dr. Jacob Churg and Dr. Lotte Strauss in 1951[1]. EGPA is commonly revealed by late onset asthma and peripheral eosinophilia, however it can rarely present as isolated cardiac tamponade. Owing to the high mortality rate of EGPA presenting as isolated cardiac tamponade, rapid diagnosis and early treatment is critical and lifesaving. Other more common cardiac manifestation of EGPA includes pericarditis, myocarditis, valvulopathies, cardiomyopathy and coronary artery vasculitis.

52-year-old female presented to the hospital with chief complaints of progressive shortness of breath, orthopnea, chest pain, and dry cough.

The symptoms started one month ago and progressively worsened which prompted her to visit the hospital.

She had no significant prior personal or family history.

Vital signs were notable for blood pressure of 124/79 mmHg, sinus tachycardia with heart rate of 119 beats per minute, hypoxia with oxygen saturation of 89%, respiratory rate of 16 breaths per minute and afebrile temperature. On physical examination, she demonstrated sinus tachycardia, a pericardial friction rub, and rales in her bilateral lower lung fields. She did not demonstrate pulsus paradoxus. Review of system was notable for numbness and tingling of the right hand for the past month. 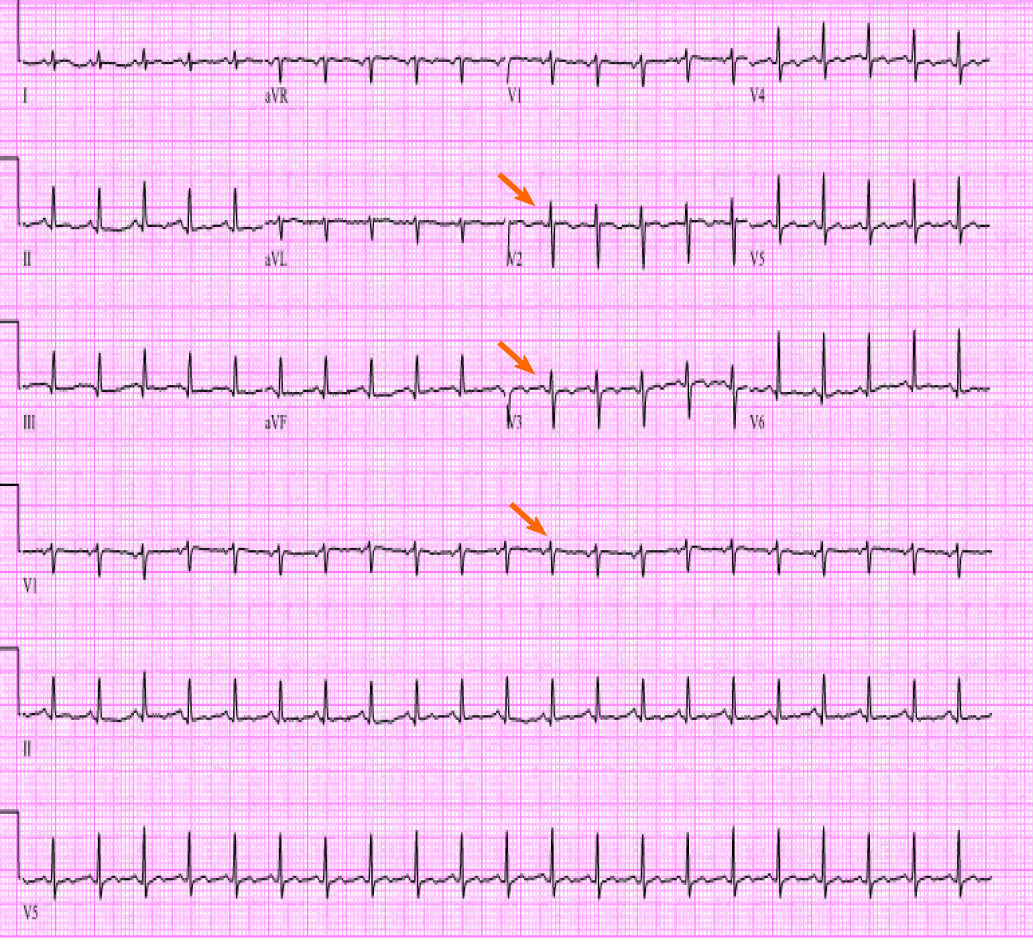 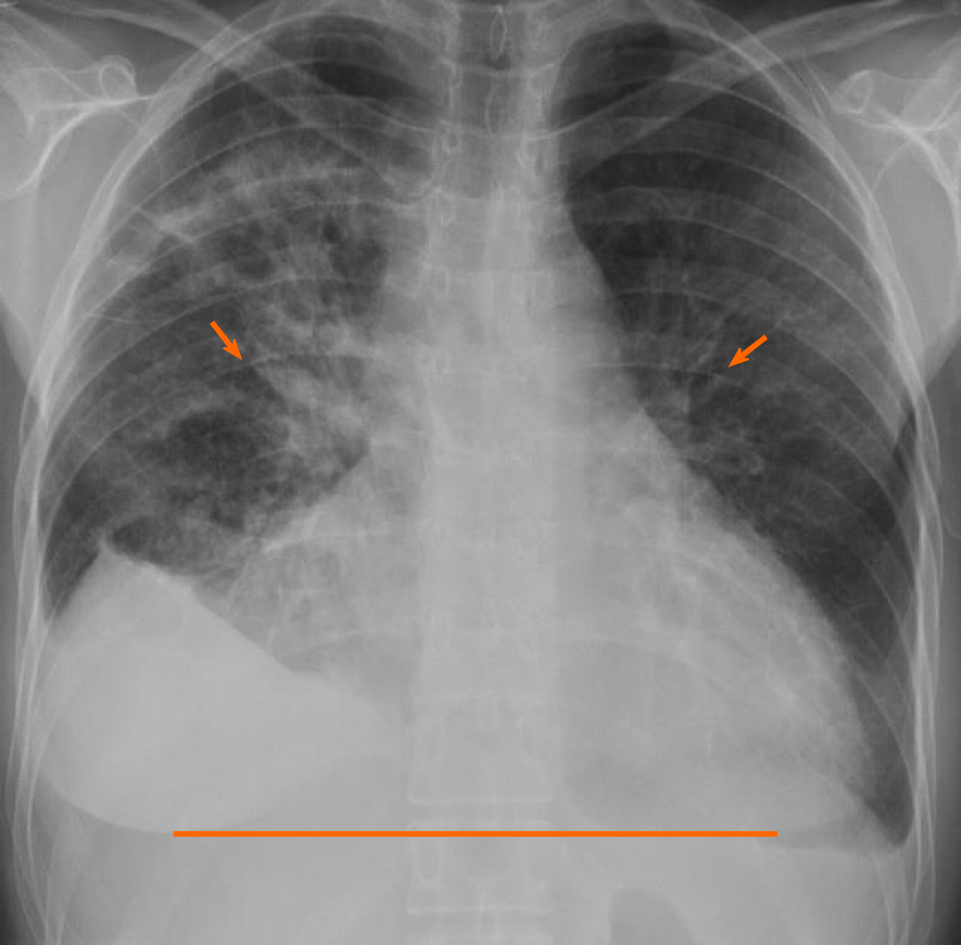 Computed tomography angiogram revealed a large pericardial effusion, moderate right and small left pleural effusions, and bilateral pulmonary infiltrates (Figure 3). This was followed with a transthoracic echocardiogram which demonstrated normal left ventricular cavity size, wall thickness and systolic function with estimated ejection fraction greater than 55%. No regional wall motion abnormalities were detected. Aortic and mitral valves were normal. There was trace tricuspid regurgitation. The right atrium was normal in size. The right ventricle collapsed in diastole. There was a large pericardial effusion (Figure 4). The diastolic compression of the right ventricle was suggestive of tamponade physiology. 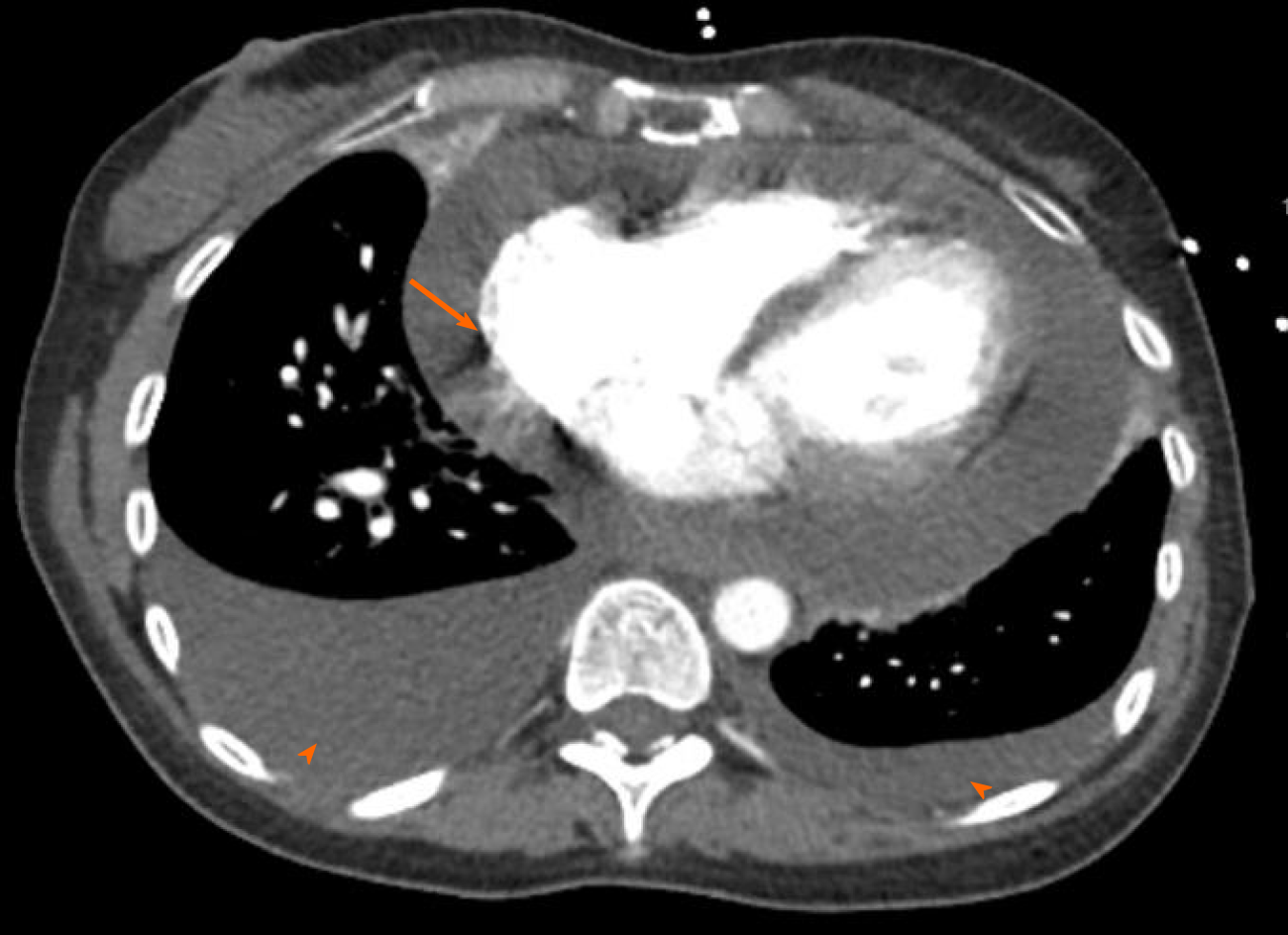 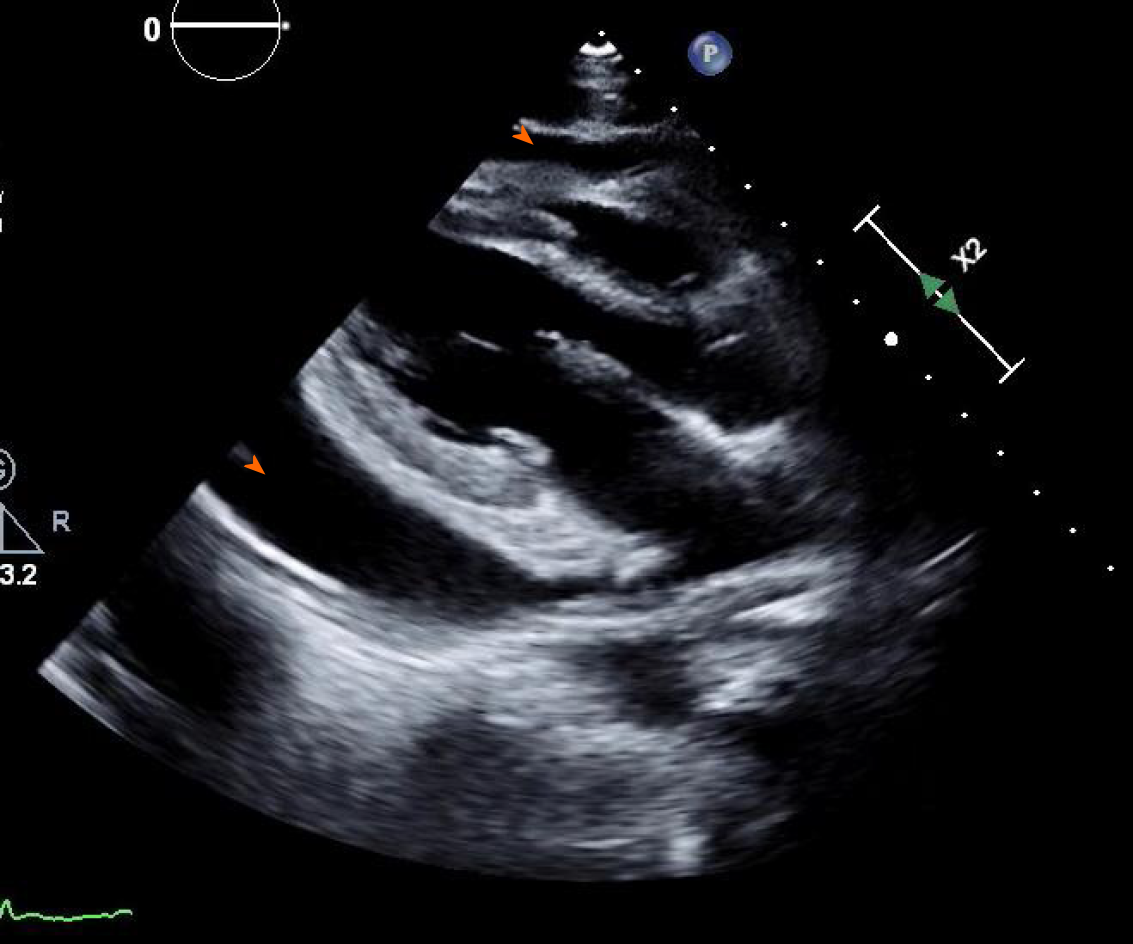 Based on the American College of Radiology (ACR) guidelines, the patient was diagnosed with EGPA which manifested in its rare form of cardiac tamponade. 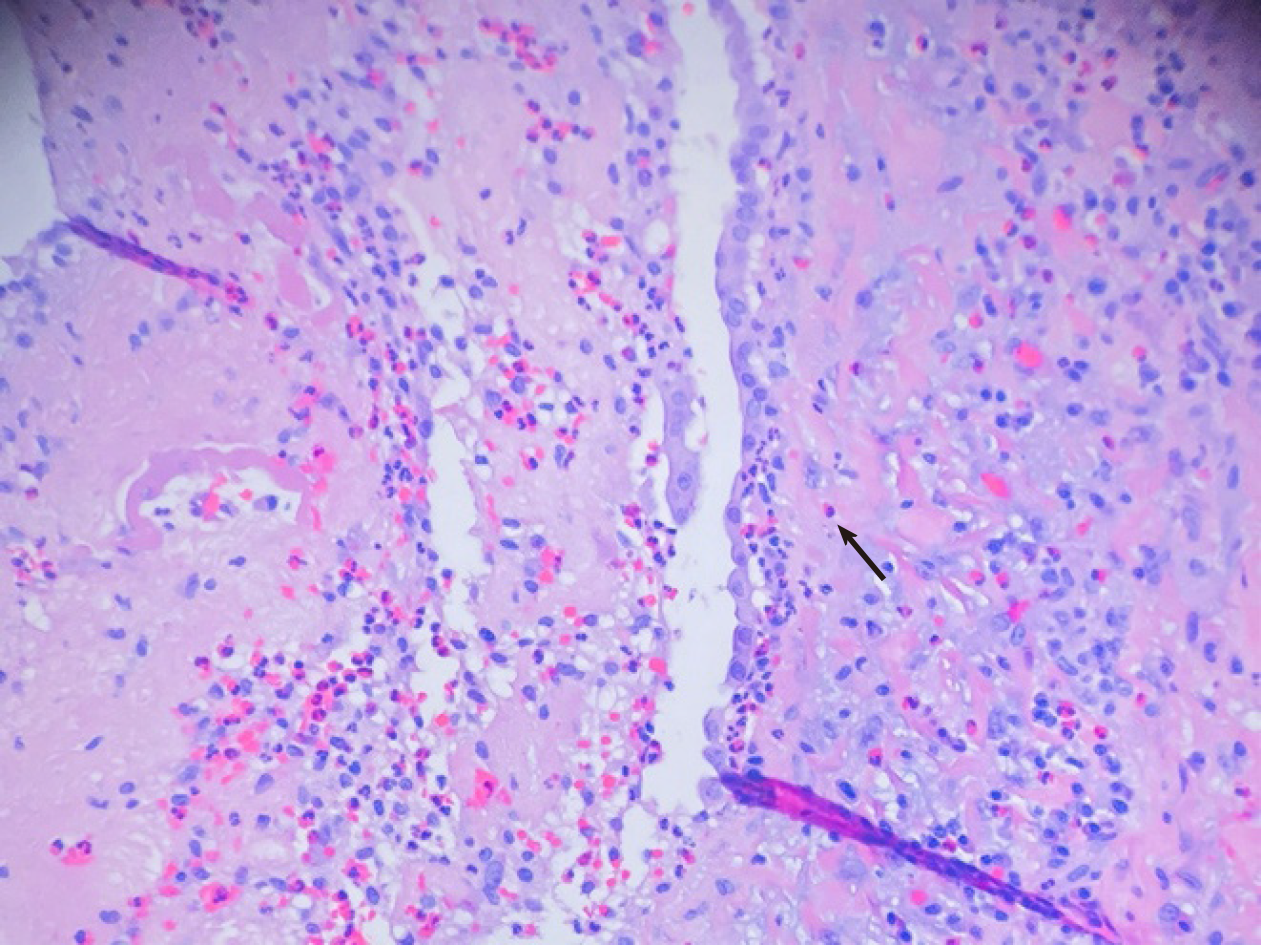 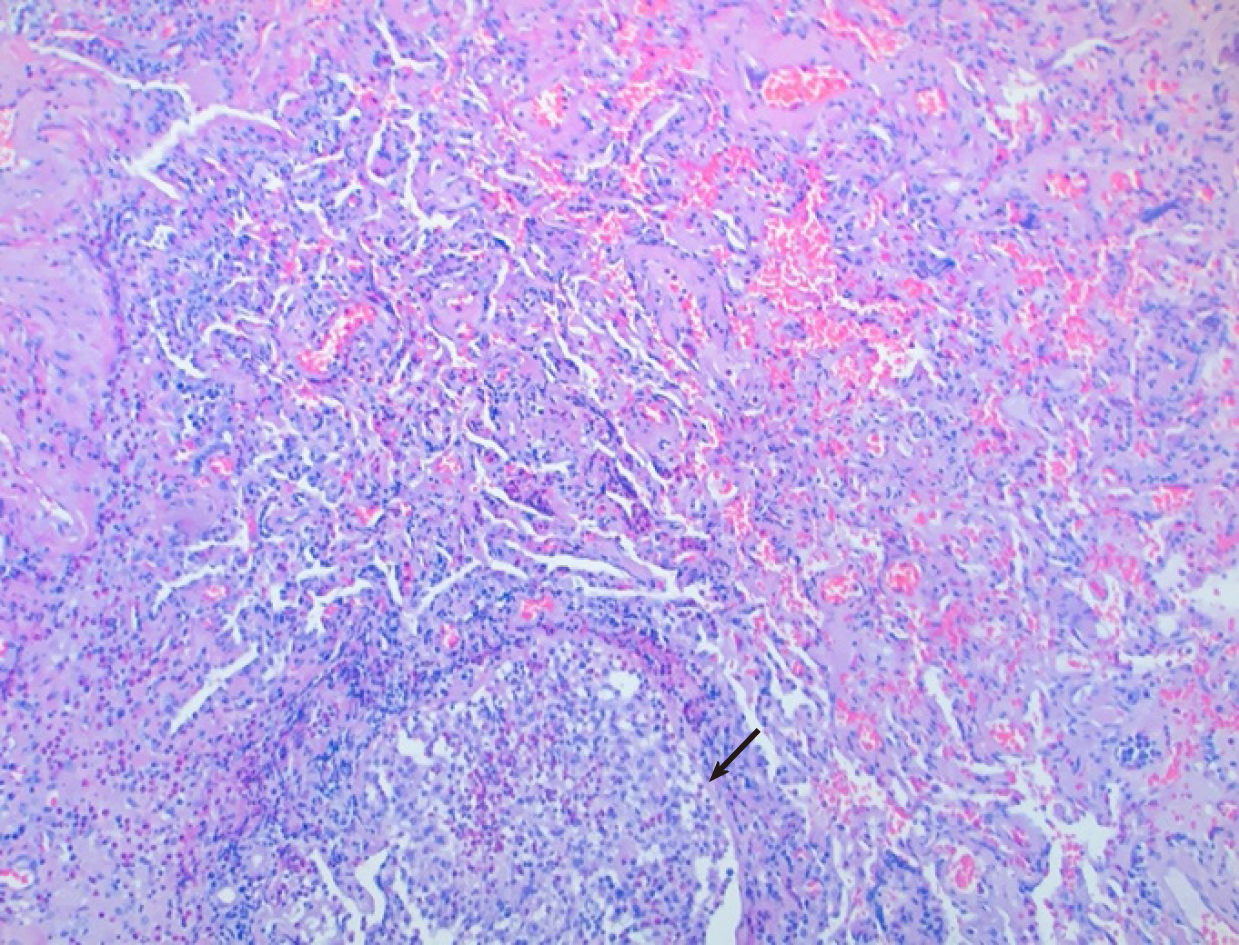 At one-month interval, transthoracic echocardiogram, CT chest with contrast, and cardiac magnetic resonance imaging (MRI) with and without contrast were performed to monitor disease progression. Echocardiogram showed resolution of pericardial effusion and normal biventricular function. CT chest showed resolution of bilateral infiltrates. Cardiac MRI with and without contrast showed normal biventricular volume and systolic function. There were no areas of focal hyperenhancement, consistent with the absence of myocardial scarring or fibrosis. A post gadolinium LAVA sequence was acquired which demonstrated normal measurements of biventricular dimensions, volume and ejection fraction. At follow up office visits, she had no recurrence of cardiopulmonary symptoms, her mononeuritis had resolved, there was no evidence of eosinophilia on hemogram, and she tolerated the medication well.

EGPA is a rare systemic disease characterized by asthma, peripheral and tissue eosinophilia and systemic vasculitis. It is reported to have an annual incidence of 1.0 – 4.2 cases per million[2]. Cardiac involvement commonly includes eosinophilic endomyocarditis, coronary vasculitis, arrythmia, cardiomyopathy and pericarditis with small pericardial effusions[3]. EGPA presenting as cardiac tamponade is exceedingly rare[3,4]. When cardiac involvement is present, rapid diagnosis is necessary because it is an important predictor of morbidity and mortality.

According to the ACR, the diagnostic criteria for EGPA includes: (1) Asthma; (2) Eosinophilia > 10%; (3) Neuropathy; (4) Non-fixed pulmonary infiltrates; (5) Paranasal sinus abnormality; and (6) Extravascular eosinophils[5]. The ACR determined that having at least four of the six criteria yields a sensitivity of 85% and a specificity of 99.7% for EGPA[5]. Our patient met four of the six criteria for the diagnosis of EGPA including: peripheral eosinophilia of 45%, mononeuropathy of right hand, bilateral pulmonary infiltrates on CT angiogram and pericardial/Lung tissue biopsy with extravascular eosinophilia.

The French vasculitis study group demonstrated that EGPA constitutes of two separate clinical patterns which can be distinguished by the ANCA status; patients with cardiac eosinophilic tissue infiltration are usually ANCA negative, whereas patients with pulmonary and renal involvement are ANCA positive[6,7].

EGPA manifesting as isolated pericarditis with pericardial effusion may present as mild symptoms of chest pain, cough, and dyspnea to life threatening conditions such as hemodynamic instability. Chest radiograph and electrocardiogram can show initial abnormalities, while urgent echocardiogram confirms the diagnosis of pericardial effusion and tamponade. In such scenarios, pericardiocentesis is performed, and pericardial fluid analysis demonstrates exudative effusion with marked eosinophilia. Histopathology from pericardial biopsy demonstrates vasculitis with eosinophilic infiltration. When patients with EGPA exhibits tamponade without involvement of other visceral organs, the diagnosis is difficult to make without pericardial biopsy. Cardiac MRI is an important noninvasive tool in demonstrating extent of cardiac involvement and following disease progression[8].

The management and prognosis of EGPA depends on the number of organs involved and their severity. Isolated pericarditis can be treated with high dose steroids alone, whereas pericarditis with myocardial injury and other visceral organ involvement are treated with a combination of high dose steroids and immunosuppressive drugs[3,4]. Biologics such as mepolizumab, a humanized monoclonal anti-interleukin (IL)-5 antibody has been shown to maintain higher proportion of study participants in remission, as well as reduce glucocorticoid use in patients with EGPA[9,10]. IL-5 is a cytokine involved in eosinophil proliferation, maturation, and differentiation. IL-5 is found to be at increased levels in patients with EGPA[10]. Mepolizumab binds to IL-5 and prevents interaction with its receptor on the eosinophil surface, thus providing consistent reduction of peripheral eosinophilia and clinical improvement in patients with eosinophilic disorders such as severe eosinophilic asthma and EGPA[10].

In summary we have presented a patient with pericarditis leading to pericardial effusion and cardiac tamponade which lead to the diagnosis of EGPA. Pericardial fluid analysis revealed eosinophilic infiltrate and pericardial biopsy demonstrated eosinophilic tissue infiltration. Furthermore, cardiac MRI did not show any evidence of inflammation or scarring to indicate myocardial involvement. Thus, this is a rare case of EGPA presenting with isolated pericardial involvement which eventually lead to cardiac tamponade. The patient was initiated on high dose prednisone with good response over four weeks. Subsequently, the patient was started on a steroid taper and mepolizumab was added as an adjunct to reduce steroid requirement and maintain longer remission rates. On interval follow up the patient had excellent response, which indicates EGPA presenting as cardiac tamponade can be managed with mepolizumab as a steroid sparing agent.