Intra-abdominal esophageal duplications are rare entities in adults. They are mostly asymptomatic, but since they can lead to complications surgical excision is advised for all duplication cysts. We present a case of a 20-year-old male with colic-like abdominal pain, mimicking symptoms of cholecystolithiasis. However after cholecystectomy the symptoms were still present. A computed tomography-scan of the abdomen and an endoscopic ultrasound revealed a cyst of the esophagus of 3.0 cm × 2.3 cm in size. Diagnostic laparoscopy was planned, during which we observed a para-esophageal cyst at the gastro-esophageal junction. Laparoscopic excision of this cyst was performed. Pathophysiological examination revealed an esophageal duplication cyst. We report a rare case of a symptomatic intra-abdominal esophageal duplication cyst in an adult. One must consider this diagnosis when more common diagnoses to account for the patient’s symptoms are excluded. Removal of duplication cysts can be done laparoscopically.

Core tip: Intra-abdominal esophageal duplication cysts are rare entities in adults, especially when they are symptomatic. Since these anomalies can lead to complications surgical excision is advised for all of them. We present a case of a 20-year-old male with colic-like abdominal pain, mimicking symptoms of cholecystolithiasis, but caused by an intra-abdominal duplication cyst of the esophagus. The cyst was excised laparoscopically. The procedure was uneventful and the patient was free of symptoms. This case shows that one must consider the diagnosis of a symptomatic intra-abdominal esophageal duplication cyst when more common diagnoses to account for the patient’s symptoms are excluded.

Gastroenteric duplication cysts are congenital malformations that may affect the gastro-intestinal tract from mouth to anus. They are usually attached to the gastrointestinal tract, have smooth muscle cells in the wall of the cyst and are lined with gastrointestinal epithelium. Most of them are found in the small intestine (44%), the esophagus (20%) or in the large intestine (15%)[1]. Esophageal duplication cysts mostly arise in the mediastinum. There are only a few case reports that describe intra-abdominal esophageal duplication.

Duplication cysts may be symptomatic, but even then definitive pre-operative diagnosis can be difficult because of non-specific clinical symptoms. Also, symptoms might be mistaken for other more common abdominal conditions. Because of potential complications such as bleeding, infection or conversion to a malignancy, currently the most common treatment of these anomalies is surgical excision, even if they are not symptomatic.

We present a 20-year-old male with no medical or surgical history who was evaluated because of nausea and recurrent colic pain in the right upper abdomen radiating towards his back, but no vomiting or fever. Ultrasound of the upper abdomen was performed, which showed gallstones but no other abnormalities. Initially, symptomatic cholecystolithiasis was considered as the primary diagnosis and subsequently our patient underwent a laparoscopic cholecystectomy. The procedure was performed without complications and the patient was initially free from symptoms.

However, one year later he presented again with the same symptoms as before. Physical examination and laboratory testing did not reveal any abnormalities. The differential diagnosis at this point was choledocholithiasis or urolithiasis. Ultrasound of the abdomen showed no dilatation of intra- or extrahepatic bile ducts or choledocholithiasis. A computed tomography (CT)-scan of the abdomen revealed no urolithiasis, but it did show a mass at the gastro-esophageal junction that was further evaluated with endoscopic ultrasonography (EUS). EUS identified a 3.2 cm × 2.8 cm sized smooth lined lesion (Figure 1) in the distal esophagus just below the diaphragm (Figure 2) We could not differentiate between a gastrointestinal cyst or a leiomyoma, necessitating further analysis. 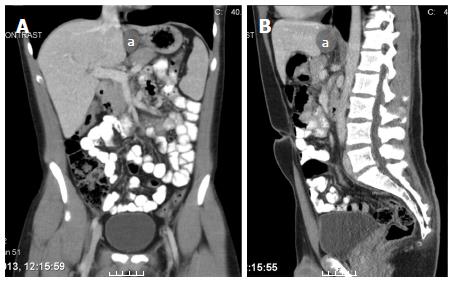 Figure 1 Computed tomography images of the esophageal duplication cyst (a). A: Frontal view; B: Sagittal view. 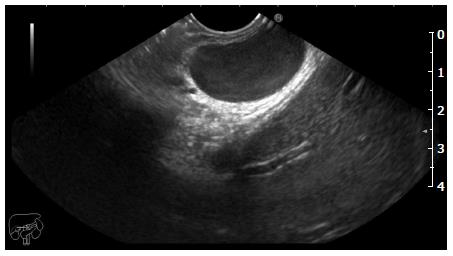 Endoscopic fine needle aspiration revealed mucinous material without any signs of malignant cells on histopathological examination. Gastro-intestinal duplication cyst was considered as one of the possible diagnoses and diagnostic laparoscopy was planned. During laparoscopic exploration we observed a 3 cm × 3 cm sized para-esophageal cystic lesion at the gastro-esophageal junction, 2-3 cm above the Z-line (Figure 3). The cyst was dissected free and the connection with the oesophagus was excised with an endoGIA© after which the staple line was oversewn with a V-loc© suture. The procedure went uneventful. 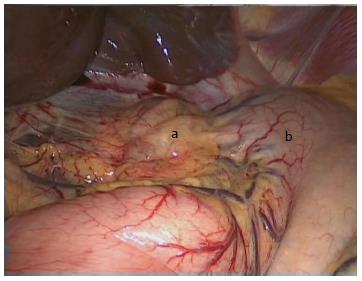 Figure 3 Preoperative image with the cyst (a) medial to the esophagus and stomach (b).

Histopathological analysis of the specimen revealed a 30 mm × 30 mm × 25 mm sized cyst filled with clear fluid. The wall had a thickness of 3 mm and consisted of two muscular layers lined by respiratory columnar epithelium without any signs of cartilage tissue found in the cyst (typical for bronchogenic cysts) and therefore the final diagnosis of esophageal duplication cyst was suggested (Figure 4).

The postoperative course was uncomplicated and the patient could be discharged on day two postoperatively. At follow up 5 mo later the patient did not display any of the earlier experienced abdominal symptoms.

Gastrointestinal duplication cysts are very rare abnormalities. Autopsy studies have shown a prevalence of approximately 1:4500 and esophageal duplications occur even less frequently, 1:8200[2,3]. Only a few cases are described in which the cyst is connected to the intra-abdominal part of the esophagus. Only ten percent of the esophageal cysts communicate with the lumen of the esophagus[4]. Table 1 shows an overview of the abdominal cases that have been published so far. This overview shows that most cysts were asymptomatic and found incidental. In case of symptoms the most common complaint was epigastrical pain. In all cases the cyst was surgically removed, of which nearly 50% by means of laparoscopy. Four cases appeared in minors, 11 cases in adults. The median age at diagnosis was 50 years.

Besides the location of the cyst, a differentiation between the origin of the cyst can be made. Although it might not have clinical relevance in case of an asymptomatic cyst, the origin can be bronchogenic, esophageal, gastroenteric, neurenteric or pericardial. The latter three are histologically easy to differentiate. Gastroenteric and neurenteric cysts are lined with gastric mucosa and pericardial cysts are lined with flattened mesothelium. The difference between a bronchogenic and esophageal cyst is more difficult since both derive from the foregut and contain ciliated epithelium. To differentiate bronchogenic from esophageal duplication cysts, Palmer’s pathologic criteria are useful. These criteria include: (1) attachment to the esophageal wall; (2) presence of gastrointestinal tract epithelium; and (3) presence of two layers of muscularis propria[5]. Duplication cysts of bronchogenic origin do not have these two layers of smooth muscle, instead they contain cartilage, bronchogenic glands or both.

The majority (80%) of esophageal duplication cysts becomes symptomatic during childhood and will be removed for that reason[1]. As a consequence these types of cysts are rarely seen in adults. If they are found during adulthood, they are mostly asymptomatic and most case reports are therefore based on an incidental finding during some kind of routine radiological investigation. However cysts can become symptomatic, like in our patient, causing abdominal pain, vomiting, dysphagia or reflux[1,2]. The growing cyst may also cause some mechanical problems of the passage of solid food and fluids because of compression of the esophagus[2]. Finally these cysts can perforate, they can cause an upper gastrointestinal bleeding or can get infected. Although a causal relationship is difficult to define, one case report has described a patient with a duplication cyst with an associated intracystic malignancy[6]. Because of these complications it is recommended to excise the cyst, whether it is symptomatic or not.

In our patient, symptoms of colic-like abdominal pain were initially addressed to symptomatic cholecystolithiasis, but eventually an esophageal duplication cyst appeared to be the actual cause of his symptoms. Although these cysts are very rare and mostly asymptomatic, they can mimic symptoms of common gastro-intestinal conditions. Therefore, one should consider these anomalies as a possible diagnosis if more obvious causes are excluded.

A 20-year-old male with a history of a cholecystectomy presents with colic like symptoms mimicking a cholecystolithiasis.

No abnormalities were found during physical examination, especially no pain during palpation of the right upper region of the abdomen.

Lab results showed no abnormalities in particular no signs of inflammation nor infection.

Histopathological analysis of the specimen revealed a 30 mm × 30 mm × 25 mm esophageal duplication cyst filled with clear fluid and a double muscular layer lined with respiratory columnar epithelium without any signs of cartilage.

Laparoscopic excision of this cyst was performed.

An esophageal duplication cyst is a rare diagnosis and is often asymptomatic.

An EUS is an endoscopic ultrasonography, which is an ultrasound made through the esophagus.

Although these cysts are very rare and mostly asymptomatic, they can mimic symptoms of common gastro-intestinal conditions. Therefore, one should consider these anomalies as a possible diagnosis if more obvious causes are excluded.

The paper describes a rare case of a symptomatic intra-abdominal esophageal duplication cyst and gives a complete overview of published cases until now. This case is very interesting for gastrointestinal surgeons. The paper is well written and concise.