Surgical therapy for gastric cancer involves both removal of the cancer lesion and complete lymph node dissection. Natural orifice transluminal endoscopic surgery (NOTES) is considered to represent the next revolution in surgery. Many surgeons and endoscopists believe that NOTES may be a superior alternative for early gastric cancer treatment. Sentinel node (SN) navigation surgery for gastric cancer: Single institution results of SN mapping for early gastric cancer are increasingly being considered acceptable. Furthermore, a major large-scale clinical trial of SN mapping for gastric cancer has recently been completed by The Japan Society of SN Navigation Surgery study group. They reported false negative rate of 7.0% while the sensitivity of metastasis detection based on SN status was 93%. Combination of SN biopsy and NOTES: This concept was first described by Cahill et al who proved the feasibility of lymphatic mapping and SN biopsy by NOTES. Lymphatic channel filling was immediately observable via the intraperitoneal optics. Partial resection of the stomach by hybrid NOTES: Several centers have already reported gastrectomy assisted by NOTES using the transvaginal route. However, the main problem of full-thickness resection of gastric wall remains endoscopic gastric closure. Establishing an endoscopic suturing method would be an important step toward expanding potential indications. NOTES is met with both enthusiasm and skepticism but will gain its own place as human creativity eventually provides solutions to its technical limitations. In the near future, NOTES can evolve the capacity to complement the existing armamentarium for gastric cancer surgery.

Surgical therapy for gastric cancer involves both removal of the cancer lesion and complete lymph node dissection, in the belief that removal of all the lymph nodes which might contain metastases should contribute to the patient’s survival. In addition, these resected lymph nodes provide important information to predict recurrence and survival and to guide adjuvant therapy decisions. Although this procedure is still a gold standard in clinical practice, since the advent of laparoscopic surgery patient expectations in combination with improved instrumentation and increasing surgeon experience have generated the possibility of less invasive treatment such as laparoscopic gastrectomy and endoscopic submucosal dissection (ESD). Recently, natural orifice transluminal endoscopic surgery (NOTES) has been considered to represent the next revolution in surgery. As flexible endoscopy has been developed initially in order to examine the stomach, many surgeons and endoscopists may believe that NOTES will be become a superior alternative for early gastric cancer treatment.

Lymphatic mapping and sentinel node (SN) biopsy is progressing towards clinical applicability for early-stage gastric carcinoma. Evidence of its technical feasibility at laparoscopy and laparotomy, coupled with advances in intraoperative methods of nodal analysis, has encouraged advocates to propose it as appropriate for patients with localized disease who could be cured by limited resection rather than conventional radical surgery thus avoiding unnecessary lymph node dissection.

In Japan, clinical applications of this novel, minimally invasive approach have had great impact on patient care for gastric cancer as more than half of gastric cancer cases in major institutions are now treated this way. The clinical applications of SN mapping for GI cancer have previously been controversial. However, single institution results of SN mapping for early gastric cancer are increasingly being considered acceptable in terms of detection rate and accuracy in determining regional lymph node status[1-3]. Furthermore, a major large-scale clinical trial of SN mapping for gastric cancer in conventional open surgery has recently been completed. The Japan Society of Sentinel Node Navigation Surgery study group conducted this multicenter prospective trial for SN mapping by combined blue dye and radioactive tracer (Technetium-99 m tin colloid) injection. They reported at ASCO 2009 that in this trial 433 early gastric cancer cases (≥ 4 cm cT1N0M0 or cT2N0M0) were enrolled at 12 major hospitals. After 36 cases dropped out due to pre or intra-operative diagnosis, the detection rate was 97.5% (387/397). Among the detected cases, 57 (15%) had pathologically-detected metastasis, of whom 53 showed SN positivity[4] (Table 1). Overall, therefore the false negative rate was 7.0% while the sensitivity of metastasis detection, based on SN status was 93%, and the accuracy of metastatic status based on SN was 99% (383/387).

This study is the first prospective multicenter trial for the gastric cancer SN biopsy. While the method is not easy to practice and not feasible in all hospitals as it requires intra-operative endoscopic skills and specific instruments such as gamma probe, the study proves the concept of SN in gastric cancer. To maximize the utility of the technique in the manner we propose, reliable intraoperative analysis (to the level attainable by immunohistochemistry) of the SNs is required. Rapid intraoperative pathological diagnosis is indeed already available for other malignancies[5-8]. Furthermore advanced optical imaging may soon allow in vivo assessment[9]. Thus, SN navigation seems a very promising method for individualized, minimally invasive surgery.

COMBINATION OF SN BIOPSY AND NOTES

The initial idea behind NOTES was that of an incisionless surgery, which would de facto eliminate scars by accessing the peritoneal cavity via natural orifices. On the other hand, endoscopic treatments for early gastric cancer such as ESD have already been established as a “no scar treatments”. Given that a considerable number of standard gastrectomy with lymphnode dissections are being performed worldwide which in fact are unnecessary (although presently this is known only after the operation), it is clear for the surgeons and endoscopists that the concepts of NOTES, ESD and SN navigation should be combined.

The first step towards this concept was first described by Cahill et al[10,11] who separately proved the feasibility and reliability of lymphatic mapping and SN biopsy by NOTES for the sigmoid colon and stomach in an animal model. For both organs, lymphatic channel filling was immediately observable by the intraperitoneal optics after the methylene blue dye was injected. Furthermore they also demonstrated SN biopsy followed by ESD[12] (Figure 1). 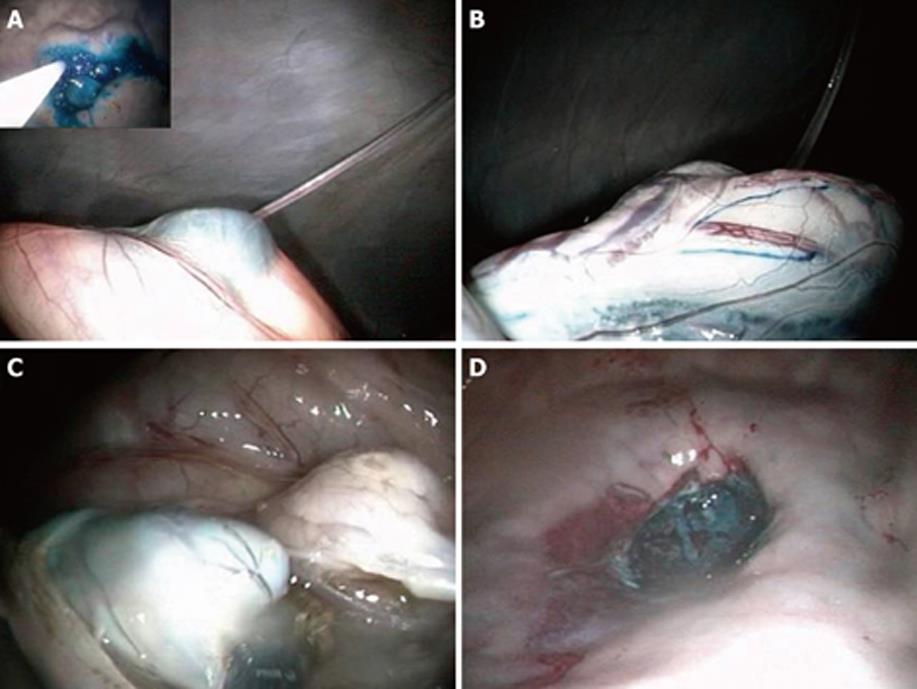 Figure 1 Lymphatic mapping of the stomach. To allow for a straight approach to the stomach and its lymphatic basin by the natural orifice transluminal endoscopic surgery (NOTES) endoscope, a transvaginal access was used. A space in the retroperitoneum was made by blunt dissection so that the double-channel endoscope could be advanced through the retroperitoneum and into the peritoneum proper. A: The intraperitoneal NOTES endoscope observes lymphatic mapping as performed by the intraluminal gastroscope on either side of the pseudolesion (see insert). One point five millilitre of methylene blue dye was used for each submucosal injection; B: The blue stained efferent lymphatic channels from these injection sites are seen to run to and then along the greater curvature; C: Torque on the gastroscope allows these channels to be followed by fully exposing both the stomach’s posterior surface and allowing access of the NOTES endoscope to the retrogastric space. A single sentinel node is found in this case just behind the pylorus. The faint blue tinge of the node as it takes up the dye is evident. An excisional biopsy of the node was performed and the specimen retrieved to the exterior by grasping and withdrawing the entire endoscope; D: View of the stomach, after removal of a 1.5 cm specimen by endoscopic submucosal dissection.

It seems clear that NOTES-SN biopsy may augment and thereby extend the role of ESD. Such a combined approach may be particularly useful for those unfit or unsuitable for “gold standard” operative resection. It is furthermore intriguing to suggest that NOTES could also allow full-thickness transmural localized resection, meaning that this approach could perhaps provide definitive surgical treatment for small T2 or even T3, N0 cancers[13]. A means of secure gastrotomy closure is however crucial[14-18]. Different techniques have been explored varying from “no closure” through suture closure to the use of percutaneous endoscopic gastrostomy tubes, endoclips, prostheses and tissue glues. However, no-one method has yet been universally accepted or adopted although considerable work is ongoing.

PARTIAL RESECTION OF THE STOMACH BY HYBRID NOTES

NOTES may further advance by combination with laparoscopic surgery as well as ESD. By combing with more conventional methods, the application of NOTES can potentially cover a wider range of diseases. EGC is undoubtedly a good candidate for this kind of surgery. NOTES-related surgery can play a role between the two generally accepted standard treatments for EGC, endoscopic surgery and laparoscopic surgery. Laparoscopic local resection (full-thckness resection) has been reported as a useful alternative to total or subtotal gastrectomy with EGC. This is usually done from outside the stomach using a multifiring stapling device and it is occasionally difficult to obtain adequate surgical margin even with intraoperative endoscopic control. Therefore, the substitution of ESD by the endoscopic full-thickness resection may improve the patient’s post operative quality of life. Abe et al[19] have already reported the use of this technique although their procedure uses 4 trocars, which might be reduced in the future by developing a “hybrid” NOTES technique. The transvaginal route might be a good candidate for access to the stomach and indeed several centers have already reported sleeve gastrectomy assisted by NOTES[20-23]. Similar methods might therefore be applicable to partial or wedge resection for the primary lesion alone in the case of small, early gastric cancer with the resected specimen then being removed via the breached organ. Certain gastrointestinal stromal lesions may also be resectable by such an approach[13,24]. Potentially magnetic anchoring and guidance systems may also be enrolled to further reduce trocar number with the magnetic component within the viscus being removed with the specimen[25-27].

The main problem with full-thickness resection of gastric wall remains, however, endoscopic endoscopic gastric closure. As mentioned earlier, even methods for closure of the small gastric hole for transgastric NOTES procedure are not yet established and so endoscopic suture for a relatively larger area is much more challenging. Although several groups have used endoscopic suture for animal stomach[28,29], the method it is not yet easy to apply in clinical settings. Thus establishing an effective endoscopic suturing method would be an important step toward expanding potential indications for NOTES related procedure.

NOTES is met with both enthusiasm and skepticism but will gain its own place in the field of surgery as, sooner or later, human creativity will eventually provide solutions to its technical limitations. In the near future therefore, we believe, that NOTES will evolve the capacity to compliment the existing armamentarium for gastric cancer surgery.