Abdominal actinomycosis is a chronic suppurative infection caused by Actinomyces species. The ileo-cecal region is most commonly affected, while the left side of the colon is more rarely involved. The infection has a tendency to infiltrate adjacent tissues and is therefore rarely confined to a single organ. Presentation may vary from non specific symptoms and signs to an acute abdomen. A computed tomography scan is helpful in identifying the inflammatory process and the organs involved. It also allows visual guidance for percutaneous drainage of abscesses, thus aiding diagnosis. Culture is difficult because of the anaerobic character and slow growth of actinomycetes. Colonoscopy is usually normal, but may shows signs of external compression. Preoperative diagnosis is rare and is established only in less than 10% of cases. In uncomplicated disease, high dose antibiotic therapy is the mainstay of treatment. Surgery is often performed because of a difficulty in diagnosis. Surgery and antibiotics are required in the case of complicated disease. Combined medical and surgical treatment achieves a cure in about 90% of cases. The authors report a case of sigmoid actinomycosis where diagnosis was made from the histology, and a review of the literature is presented.

Actinomycosis is a chronic suppurative infection which spreads to contiguous tissues and has the tendency to form external sinuses that may drain characteristic sulfur granules composed of a matrix of calcium phosphate, colonies of actinomycetes, cellular debris and associated organisms[1]. The most common pathogen in humans is Actinomyces Israelii, named after Israel who was first to describe the microorganism in a human autopsy specimen[2]. This is a gram-positive, non-spore forming anaerobic bacterium which is a commensal in the mucosa of the oral cavity and upper gastrointestinal tract, but able to cause opportunistic infections[1].

The authors report a case of actinomycosis of the sigmoid colon and review the literature.

A 67-year-old African-Caribbean lady presented with a 3-mo history of altered bowel habits associated with worsening right iliac fossa pain and nausea. Past medical history showed hypertension, depression and a left-sided stroke. Her surgical history revealed a cesarean section at the age of 25. On examination she was dehydrated, pyrexic (38.2°C) and tachycardic (118 beats/min). The abdomen was tender with guarding in the right iliac fossa, and obstructive bowel sounds were heard. Blood tests showed a microcytic anemia (hemoglobin 9.3 g/dL) and a high white cell count (20 000/mm3). A rapid sickle cell test performed prior to the procedure was negative.

A computed tomography (CT) scan of the abdomen and pelvis was performed and this showed a 6.5 cm × 7.7 cm inflammatory mass in the right iliac fossa involving the sigmoid colon which contained a few diverticulae. No free air was noted. The patient was resuscitated, transfused with 2 units of blood and was commenced on broad spectrum antibiotics. At laparotomy, an abscessed mass of the sigmoid colon was found. This involved a loop of small bowel and infiltration of the uterus, fallopian tubes and ovaries. A Hartmann’s procedure was carried out (Figure 1). Histology showed an inflammatory mass with abscess formation arising from outside the bowel with the mucosa being well defined and unremarkable. The bowel wall was fibrotic and edematous with a few diverticulae, but no evidence of perforation. Numerous lymphoid aggregates, some with reactive germinal centers were present within the submucosa. Extensive pericolic necrosis containing numerous bacterial colonies of Actinomyces species were noted (Figures 2 and 3). A diagnosis of sigmoid actinomycosis was made. The patient made an uneventful recovery and was started on a 6-mo course of penicillin. At 1-year follow-up she was well and free from disease. 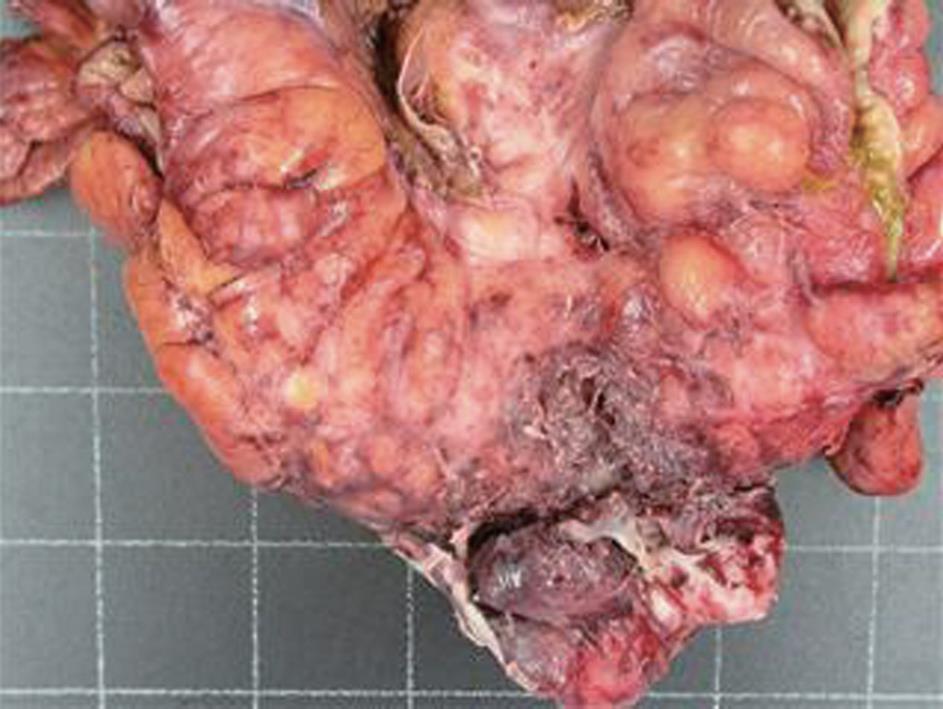 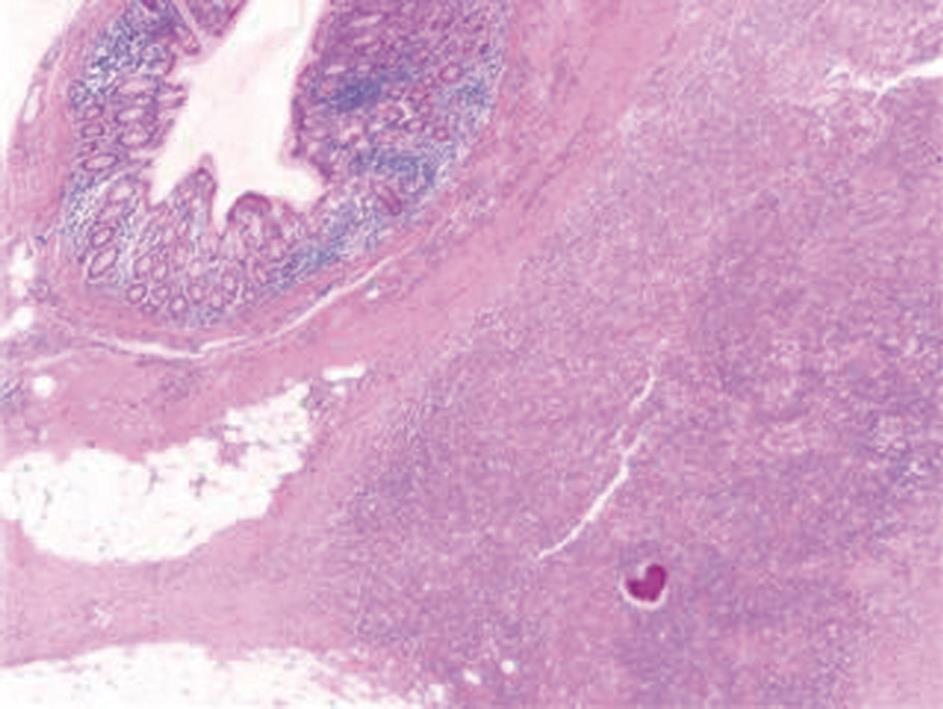 Figure 2 Histology: A colony of Actinomyces is seen within the pericolonic inflammatory tissue. 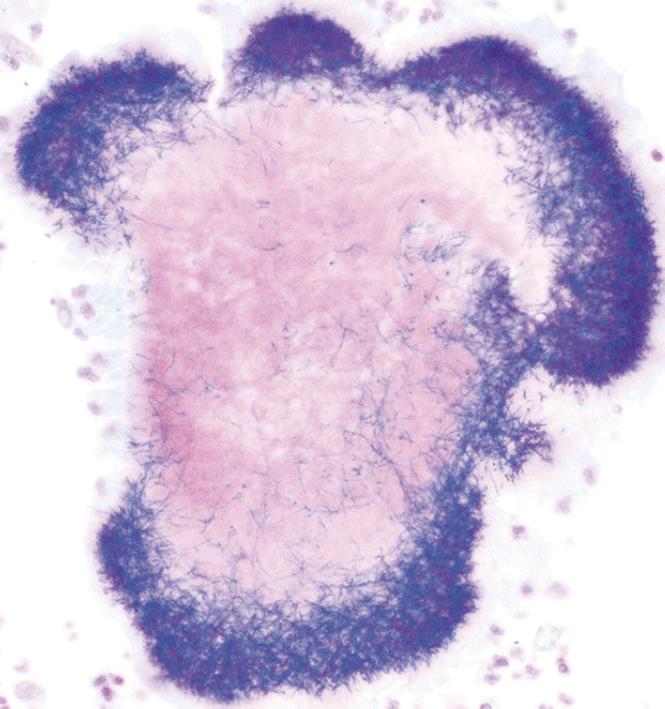 Actinomycetes are normally not capable of invading the intact intestinal mucosa. However, under certain circumstances deeper invasion occurs. Predisposing factors include immunosuppression (HIV, diabetes), surgical trauma, appendicitis, diverticulitis, bowel perforation, foreign bodies and neoplasia[3-5]. The bacterium is found in up to 25% of cervical smears performed on women with an intrauterine device and this may explain a higher incidence of infection in these patients[6-9]. No predisposing factors are noted in about 50% of cases[10].

Once outside the intestine, the infection usually spreads locally with only a rare incidence of hematogenous or lymphatic spread[11].

The ileo-cecal region is most commonly involved[12]. The left side of the colon is rarely reported to be affected[3,13-20]. Hepatic involvement accounts for 5%-15% of cases and is often associated with multiple small abscesses[21]. Other reported sites include the stomach, gallbladder, pancreas, small bowel, anorectal region, pelvis and abdominal wall[3,5]. Involvement of retroperitoneal organs may result from hematogenous dissemination or direct extension[22,23].

Abdominal actinomycosis usually presents as a slowly growing mass which may be associated with altered bowel habits, nausea, vomiting and cramping pain. Constitutional symptoms are common and include anorexia, weight loss, fever and night sweats. Mild to moderate leukocytosis is often noted[3,11,12]. Occasionally, the disease may be latent for years and manifest itself in the form of multiple sinuses, fistulae, bowel stricture or hydronephrosis[4,5,23].

A preoperative diagnosis is rarely considered and is established only in less than 10% of cases. The nature of the organism is generally identified from a surgically resected specimen, culture from abscesses or at autopsy[3,18].

Radiographic evidence is usually non specific. Barium studies may show signs of external bowel compression with a tapered narrowing of the lumen, but complete obstruction is rarely seen[6]. Colonoscopy is usually not useful in diagnosis as the disease is of extramucosal origin. However, endoscopy is important to exclude colitis or neoplastic disease and may reveal luminal narrowing or stiffness. Occasionally, nodules with central umbilication are noted and these are related to bowel wall fibrosis as a result of chronic inflammation[19].

A CT scan is helpful in identifying the inflammatory mass and the organs involved. Bowel thickening and inflammatory changes which cross fascial planes and involve multiple compartments are usually seen. CT-guided drainage of abscesses may also lead to identification of the microorganism[19]. Sulfur granules can be observed in the purulent material in 50% of cases, but these are not pathognomonic for the disease. In fact, Nocardia, Streptomyces, and some Staphylococci can produce comparable granules[24]. Culture is difficult because of the anaerobic characteristics and slow growth of Actinomyces. Laboratory tests may reveal a normocytic, normochromic anemia, leukocytosis and an elevated erythrocyte sedimentation rate[25].

Gastrointestinal actinomycosis resembles other chronic inflammatory bowel diseases such as tuberculosis and Crohn’s disease, particularly when fistula or sinus tracts are present. Also, bowel malignancy, diverticulitis, appendicitis and amebiasis are part of the differential diagnosis[3]. If a diagnosis can be made without surgery and the disease is uncomplicated, the treatment of choice is an antibiotic. High-dose penicillin is the standard treatment, although cephalosporin is often used as it can be administered on a less frequent dosing schedule. Other effective antibiotics include tetracycline, erythromycin, chloramphenicol, clindamycin and imipenem[3,26-28]. There is still controversy regarding the dosage and duration of antibiotic treatment. However, a long course for a period of at least 6 mo or until disappearance or stabilization of the lesions is recommended, in consideration of the low penetration in the fibrotic area and the tendency of the disease to recur[5,18]. Surgical treatment is often required because of difficulty in diagnosis or in combination with antibiotics in the presence of extensive disease, necrosis, abscess, stricture or persisting sinuses and fistulae. Combined medical and surgical treatment achieves a cure in about 90% of cases[19].

In conclusion, abdominal actinomycosis is to be considered in the differential diagnosis of an abdominal mass. Predisposing factors, imaging, blood tests and microbiology studies may aid diagnosis. Medical treatment should be tried first in uncomplicated cases and surgery limited to dealing with complications or persistent disease.