Pancreatic cancer is the fourth leading cause of cancer-related death worldwide. Extensive research has yielded advances in first-line treatment strategies, but there is no standardized second-line therapy. In this review, we examine the literature trying to establish a possible therapeutic algorithm.

Core tip: Pancreatic cancer is an emerging disease. In this review a possible therapeutic algorithm for second line treatment is hypothesized.

Pancreatic cancer (PDA) is an emerging disease and is the fourth leading cause of cancer death worldwide[1]. The prognosis is very poor; the 5-year survival rate is 5%, and the life expectancy of patients with metastatic PDA is approximately 2.8-5.7 mo[2]. These poor outcomes are likely due to resistance to chemotherapy and PDA biology. PDA often presents with micro-metastatic lesions at diagnosis, which are subsequently confirmed by radiological evidence. The mechanisms underlying PDA development and progression have not been fully elucidated, hindering the development of therapeutic strategies for disease management. National Comprehensive Cancer Network guidelines recommend 5-fluorouracil-oxaliplatin-irinotecan (FOLFIRINOX) or nab-paclitaxel plus gemcitabine as first-line therapy. Gemcitabine (alone or in combination) is recommended as second-line therapy, with capecitabine or fluoropyrimidine plus oxaliplatin as the final option[3]. In fact gemcitabine seems to be more effective than fluoropyrimidine[4]. Second-line therapy is not standardized and depends on patient performance status (PS) (which frequently worsens after first-line therapy), comorbidities, previous treatments, and residual toxicities. Notably, only 40% of patients can receive an additional line of therapy after the first treatment[5].

However, active treatment has been linked to improved outcomes in PDA compared to best supportive care (BSC)[6].

In this review, we focus on significant second-line studies and subsequently propose a therapeutic algorithm for PDA.

Although studies of efficient target therapies are promising, the backbone of second-line strategies for PDA involves a combination of chemotherapeutic agents. Currently, gemcitabine-based chemotherapy or fluoropyrimidine-based therapy, depending on previous drug regimens, remains the standard of care in the second-line setting.

PDA is a heterogeneous cancer and identifying plausible therapeutic targets is consequently difficult. The efficacy of a variety of drugs targeting different pathways has been evaluated, including targets in angiogenesis, farnesyl-transferases, cancer stem cells, hyaluronic acid, EGFR-MEK, m-TOR, and JAK-STAT pathways. Bevacizumab has been investigated in PDA therapy due to the favourable results achieved in other gastrointestinal cancers. Although the addition of bevacizumab to gemcitabine in first-line therapy failed to improve overall survival (OS), it has been evaluated in second-line settings. A small randomized trial comparing bevacizumab monotherapy to the combination of bevacizumab (10 mg-kg q14) plus docetaxel (35 mg-m2 day 1.8.15 q 28) reported a detrimental effect of combination therapy[7]. The only targeted therapy approved by the Food and Drug Administration for PDA treatment is erlotinib. This drug produced a small advantage in first-line treatment and also demonstrated activity (4.1 mo in OS) in second-line treatment[8]. However, the combination of erlotinib with bevacizumab failed to improve patient outcomes[9].

The EGFR and VEGFR pathways play major roles in PDA carcinogenesis and have been investigated as potential targets for second-line treatment. Inhibition of MEK1/2 by selumetinib failed to improve OS in gemcitabine-refractory patients compared to capecitabine[10], most likely due to activation of the EGFR pathway. On the contrary, a phase II trial with a small sample size, demonstrated that the combination of erlotinib and selumetinib achieved better outcomes (7.3 mo OS)[11]. The EGFR inhibitor gefitinib failed to produce satisfactory results when used in combination with docetaxel using different schedules[12,13]. The JAK-STAT inhibitor ruxolitinib achieved promising outcomes in preclinical and phase II trials[14], but the subsequent phase III trial was terminated prematurely due to inefficacy. Instead encouraging results (median OS 9.8 mo) were reported with the use of olaparib, a poly (ADP-ribose) polymerase inhibitor, in BRCA1 and BRCA2 (BRCA1/2) mutated patients prior exposed to at least one line of therapy[15]. Reni et al[16] investigated the maintenance with sunitinib in advanced PDA not progressed after six months of first line therapy, reporting an interesting result: An high 2-year OS, 22.9% vs 7.1% with sunitinib and placebo respectively.

Recent studies have focused on the new and attractive field of immunotherapy, which has achieved excellent results in the treatment of other malignancies. A variety of strategies had been tested in the following therapeutic settings: Vaccines, immune checkpoint blockade, anti-cytotoxic T-lymphocytes-associate protein 4 inhibitors, anti-PD-1 and anti-PDL1 inhibitors, and oncolytic virotherapy[17]. Good outcomes have not been obtained, most likely due to the immune suppressive nature of the PDA microenvironment, which is characterized by desmoplastic reactions. Predictive biomarkers are not available but are actively being sought[17].

Extensive data on potential treatments for gemcitabine-refractory patients are available because gemcitabine was previously the most frequently used agent for PDA. The roles of oxaliplatin and irinotecan in PDA have been evaluated due to the effectiveness of these drugs for other gastrointestinal cancers. Based on the promising results of a phase II trial[18], three phase III randomized studies have investigated the efficacy of oxaliplatin-based regimens in gemcitabine-refractory patients. The CONKO-01 trial compared the efficacy of oxaliplatin, folinic acid (LLV), and 5-fluorouracil (5-FU) 24 h (OFF) with BSC. Although the patient cohort was small due to premature accrual closure, the study represents the first second-line trial demonstrating an advantage of chemotherapy over BSC (median OS 4.8 mo vs 2.3 mo). Patient randomization was terminated early because of the hesitation of the clinicians to administer BSC when a potentially active therapy was available[19].

Afterwards in the CONKO-003 trial the OFF arm was compared to an active control arm (5-FU). The results of this study confirmed OFF schedule efficacy. OS increased significantly in the experimental arm (5.9 mo vs 3.3 mo), and there was a low rate of adverse events[6]. These data are more reliable than those of the CONKO-01 trial because of the high number of randomized patients (168). Smaller, non-randomized studies reported similar results (approximately 5 mo in OS) for combination oxaliplatin-capecitabine (xelox)[20].

However, PANCREOX, which randomized 108 patients to oxaliplatin and 5-FU, the FOLFOX6m schedule, or 5-FU plus leucovorin, demonstrated a detrimental effect of FOLFOX6m on both OS and quality of life (median OS 6.1 mo vs 9.9 mo, P = 0.02), although the high OS in the 5-FU arm appears disputable[21].

Other schedules after progression to gemcitabine-based therapy have been investigated in non-randomized studies. The combination of oxaliplatin plus raltitrexed[22] or gemcitabine[23] led to OS of 5.2 and 6 mo, respectively. A recent small phase II study reported outstanding OS (10.4 mo) for the combination of oxaliplatin and docetaxel[24]. The use of docetaxel was suggested by the result of a previous retrospective trial that reported OS of 4.0 mo with docetaxel monotherapy[25]. By contrast, the combination of docetaxel with irinotecan yielded disappointing outcomes, with OS of 4.1 mo, comparable to the median OS for other schedules in this setting[26].

Limited experience with docetaxel[27], paclitaxel[28], and eribulin[29] monotherapies has not yielded satisfactory results.

Similar to oxaliplatin, irinotecan has been evaluated in association with other agents such as raltitrexed, resulting in OS of 6.5 mo[30]. Patients pre-treated with platinoid therapy frequently experienced peripheral neuropathy, limiting therapy options. Irinotecan monotherapy exhibited moderate activity and an acceptable safety profile as second-line treatment[31]. A subsequent multicentre phase II study was conducted to investigate the combination of irinotecan with fluoropyrimidine using the FOLFIRI schedule (irinotecan 180 mg/m2, leucovorin 200 mg/m2, 5-FU 400 mg/m2 bolus and 5-FU 600 mg/m2 for 22 h). This schedule was well tolerated and led to acceptable outcomes (OS 5 mo)[32].

Recent interesting data emerging from two relevant studies (PRODIGE 4, ACCORD 11) of FOLFIRINOX first-line therapy suggest an important impact of this schedule on OS; approximately 45% of patients underwent second-line therapy, despite the high rate of adverse events in the experimental arm compared to the gemcitabine control arm, including febrile neutropenia (5.4% vs 1.2%), neutropenia (45.7% vs 21%) and diarrhoea grade 3-4 (12.7% vs 1.8%)[33].

All available agents have been tested in PDA therapy in different combinations and schedules. However, as in other cancers, the sequence of treatments and the optimization of the few efficient agents are critical. Therefore, it is very important to define an algorithm based on PS, patient age, and comorbidities for the first line decision (Figure 1). 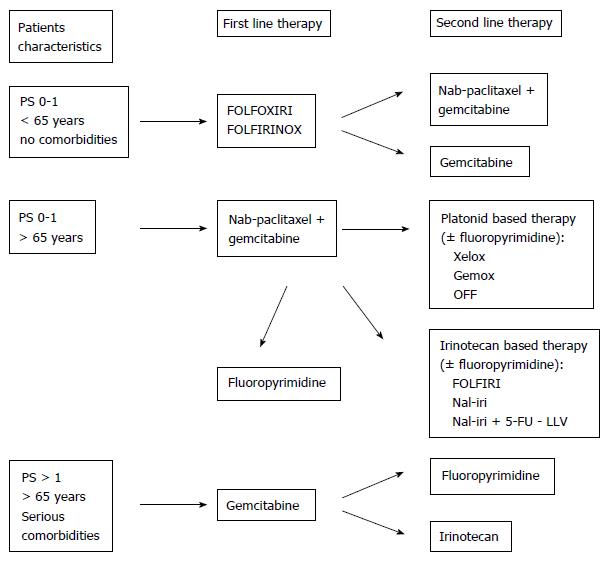 There are currently no studies assessing treatment progression following nab-paclitaxel. However, if the patient recovers from peripheral neurotoxicity, we suggest platinoid-based chemotherapy or irinotecan-based therapy. A recent post hoc analysis of the MPACT trial showed that second-line therapy is feasible and more beneficial in patients previously treated with an efficient first-line treatment, particularly nab-paclitaxel plus gemcitabine, than in patients treated with gemcitabine alone[46].

Improved outcomes may be obtained by treatment with all active agents (nab-paclitaxel, gemcitabine, irinotecan, oxaliplatin, fluoropyrimidine) during the entire patient history.

Many drugs have been investigated for PDA treatment, but outstanding OS results have only recently been obtained in the second-line setting. The median OS remains approximately 5 mo that is a good results in comparison with that achieved by BSC. Current targeted therapies have not demonstrated efficacy in phase III trial, and future studies must strengthen the efficacy of current chemotherapy agents. Drugs such as nal-iri and nab-paclitaxel represent the first real change in this landscape and may provide new hope for PDA treatment.