Positron emission tomography computed tomography (PET-CT) using 18-Fluoro-deoxyglucose (18FDG) is an imaging modality that reflects cellular glucose metabolism. Most cancers show an uptake of 18FDG and benign tumors do not usually behave in such a way. The authors report herein the case of a 38-year-old female patient with a past medical history of cervical intraepithelial neoplasia and pheochromocytoma, in whom a liver lesion had been detected with PET-CT. The tumor was laparoscopically resected and the diagnosis of inflammatory hepatic adenoma was confirmed. This is the first description of an inflammatory hepatic adenoma with an 18FDG up-take.

Core tip: In cancer therapy, the use of 18-Fluoro-deoxyglucose (18FDG) positron emission tomography computed tomography as a staging or prognostic tool, is increasing. This is also the case for primary or secondary liver cancer. In this paper, the authors report the first description of an inflammatory hepatic adenoma with 18FDG uptake.

Hepatocellular adenomas (HCAs) are rare benign hepatic tumors that are more frequent in women and have been associated with oral contraceptive use[1]. The risk of malignant transformation of HCAs is small but non-negligible[2]. The commonest complication of HCAs is bleeding, an occurrence which has been linked to multiple factors such as the size of the adenoma, pregnancy, visualization of lesional arteries, left lateral lobe location and exophytic growth. Due to these risks, recent guidelines have recommended the resection of adenomas that present: A diameter larger than 50 mm, signs of hepatocarcinoma or focal dysplasia, activated β-catenin mutation, high level of serum alfafoetoprotein, hepatocellular adenomas developing in male gender or hepatocellular adenomas developing in a glycogen storage disease[3]. The resection is regularly performed as laparoscopic hepatectomy[4]. Positron emission tomography computed tomography (PET-CT) using 18-Fluoro-deoxyglucose (18FDG) is an imaging modality that is based on an enhancement of glucose consumption, a distinguishing feature of most cancers that is in part related to the over-expression of GLUT-1 glucose transporters and increased hexokinase activity. The use of PET-CT in primary or secondary liver cancer is increasing[5,6]. As HCAs are benign lesions, they are not assumed to be 18FDG-avid, except in some rare cases. To the best of their knowledge, the authors described herein the first report of 18FDG uptake by an inflammatory HCA (I-HCA), and reviewed the literature for other reports of 18FDG uptake in other types of liver adenoma.

A 38-year-old female patient had a past medical history of cervical intraepithelial neoplasia treated with cervical conisation, and a pheochromocytoma that was laparoscopically resected in 2011. She was followed up with yearly magnetic resonance imaging (MRI) that demonstrated a segment 1 liver tumor whose size increased of 20 mm in two years. This 50-mm lesion bore the MRI features of HCA, showing a heterogeneous signal intensity on T-2 weighted images and low-signal intensity on T-1 weighted images. The lesion was slowly and gradually enhanced after injection of gadolinium without significant wash-out on portal phase (Figure 1). In addition, a left renal cyst was noticed, described as type 3 according to the Bosniak classification. An 18FDG PET-CT (Figure 2) was performed to further confirm the nature of the hepatic lesion and exclude extrahepatic metastases. The liver lesion appeared hypermetabolic with a standardized uptake value (SUVmax) of 9.3. A percutaneous biopsy was performed and immunohistology allowed the diagnosis of I-HCA. Blood carcinoembryonic antigen, carbohydrate antigen 19.9 and alphafoetoprotein were negative. A discussion in a multi-disciplinary oncological team meeting led to the decision of the resection of the hepatic lesion. A laparoscopic resection of hepatic segment 1 was performed, extended to segments 2 and 3 due to the location of the tumor at the junction between the inferior vena cava, the left and middle hepatic veins and the left branch of the portal vein. During the same anesthesia, the left kidney mass was resected through a lombotomy, following the preferences of the urologist. The surgical specimen was analyzed and showed slightly clarified hepatocytes scattered throughout the lesion, fibrous tracts with vascular structures within, probably arteries with thick walls (Figure 3). Some inflammatory components surrounded these arteries and there was no significant sinusoidal dilatation. At immunohistochemistry, serum amyloid A was negative and anti-C reactive protein antibodies showed a significant expression of the inflammatory protein around blood vessels, confirming I-HCA (Figure 4). Inflammatory cells were CD3 positive (Figure 5). The immediate post-operative state was excellent, without significant pain and fast oral feeding. The length of hospital stay was 5 d. The patient was seen again one month later for an evaluation visit and no particular problems were observed. 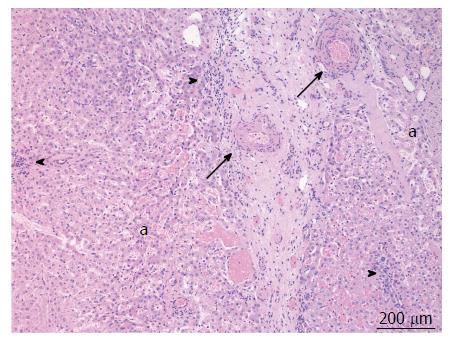 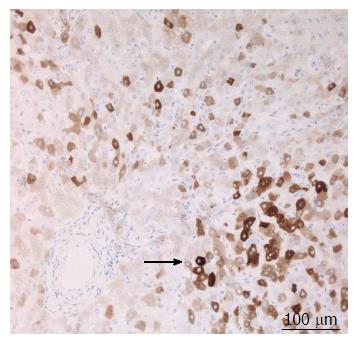 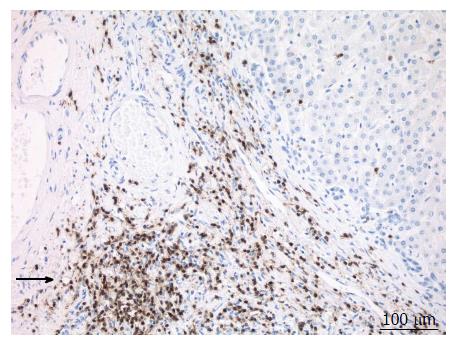 This report describes the occurrence of a 50-mm I-HCA that was highly avid for 18FDG at PET-CT. The exact nature of this I-HCA was confirmed by surgical resection. To the best of the authors’ knowledge, this is the first report of 18FDG uptake by an I-HCA. HCAs are classified into four types, according to their genetic and histologic features (Table 1): HNF1α inactivated HCA (H-HCA), β-catenin mutated HCA (β-HCA), I-HCA and unclassified HCA[7,8]. The actual risk of malignancy of all HCAs is evaluated at 4.2%[2,3]. The β-HCA subtype is associated with the highest risk of malignant transformation and must be resected (Table 1). After literature review, the authors found 22 other HCA cases with 18FDG uptake in PET-CT[9-19] (Table 2), and none of them was the inflammatory type. Eighteen of them have a description of the histological findings with steatosis. Twelve reported a final diagnosis, which was either HNF1α or hepatic adenomatosis.

The uptake of 18FDG results from the increased metabolism of the cell. The intracellular FDG accumulation is proportional to the amount of glucose utilization[20] and most cancers do have increased cellular activity. The differential diagnosis of benign 18FDG avid hepatic lesions might include focal steatosis, infectious, parasitic or inflammatory processes (e.g., hepatic abscess, cryptococcal infection, hepatic tuberculoma) and hepatic adenoma[21,22]. Focal fatty infiltration has been reported to be PET-avid[23]. In fact, as a response to fat accumulation, a subacute inflammatory hepatic reaction with infiltration of activated Kupffer cells may occur, resulting in a higher SUVmax than adjacent normal liver parenchyma. As said above, five cases of hepatic adenoma showed fatty changes but none of them were of the inflammatory type. Only one had a few inflammatory infiltrates. Maybe the fatty change itself was sufficient enough to induce a PET-avid response, without obvious inflammatory infiltrate in histological examination. It is also possible, as suggested by Nakashima et al[14], that the high expression of glucose transporters might be responsible for the increased uptake. Indeed, one study demonstrated that in H-HCA the LFABP gene ablation significantly increased the in-vitro expression of GLUT-2 but not that of GLUT-1[24]. Another study demonstrated that HNF1α-inactivated HCAs activate glycolysis due to a strong up-regulation of glucokinase[25]. These two components are features of most cancers (rise of GLUT-1 and hexokinase activity) with features of H-HCA (rise of GLUT-2 and glucokinase). However, due to the few reports published in literature, no conclusion can be made on the risk of cancer development in HCA with uptake of 18FDG. Prospective and large series are needed to confirm the role of PET-CT in HCA evaluation and prognosis.

A 5-cm liver tumor was diagnosed in a 38-year-old woman.

This tumor was asymptomatic and described at follow-up imaging after surgical resection of a pheochromocytoma.

To the authors’ knowledge, this case is the first report of a PET-CT FDG-avid I-HCA.

Hepatocellular adenomas are benign liver lesions whose imaging diagnosis could be uncertain.

PET-CT positivity is not necessary linked to cancerous degeneration in liver adenomas.

This paper reported a case of PET-avid hepatocellular adenomas and reviews related literature to show variety cause of PET-avid HCA.