Liver resection has become a safe operation, and its mortality rate is now almost zero, which is much lower than the rate seen a decade ago[1-3]. Liver resection is the best curative option for patients with certain types of liver cancer such as hepatocellular carcinoma[4,5] and metastatic liver cancer[6], as it is cost effective and results in a shorter period of disease-related suffering. To reduce the invasiveness of surgery, laparoscopic procedures have been widely adopted for various types of liver resection[2,7-9]. Preliminary clinical studies have demonstrated that compared with open surgery laparoscopic liver resection results in fewer surgical complications, less intraoperative bleeding, and shorter hospital stays whilst achieving similar oncological outcomes[2,10].

Although the mortality rates described by previous studies were similar, the reported post-liver resection morbidity rates varied markedly due to the use of different definitions for each complication. In fact, the overall morbidity rate of open liver surgery has been reported to range from 4.1% to 47.7%[2,11]. Dindo et al[12] attempted to unify the definitions of post-liver resection surgical complications by developing their own grading system (Table 1), which has been widely accepted according to surgical academic reports. However, a classification of the complications seen after hepatobiliary surgery produced by the International Study Group of Liver Surgery (ISGLS)[13] was incompatible with the definitions outlined in Clavien’s classification. For example, cases that involve surgical or radiological interventions performed under general anesthesia (categorized as IIIb under the Clavien-Dindo classification) are rarely seen in the clinical setting. Furthermore, patients who suffer organ failure usually exhibit multiple complications, and thus, it is difficult to identify a single cause of the organ failure.

Therefore, we reviewed the definitions of post-liver resection surgical complications and have developed a simple grading and classification system to allow academic reports to be compared.

Liver failure is the most serious complication after liver resection and can be life-threatening[14,15]. The etiologies of post-hepatectomy liver failure (PHLF) include a small remnant liver[16], vascular flow disturbance[17], bile duct obstruction[15], drug-induced injury[18], viral reactivation[19], and severe septic conditions[15]. In 2011, the ISGLS defined PHLF as a postoperative reduction in the ability of the liver to maintain its synthetic, excretory, and detoxifying functions, which is characterized by an increased international normalized ratio and concomitant hyperbilirubinemia on or after postoperative day 5[13]. Treatments for PHLF must be selected carefully based on the etiology of the condition. Since it was proposed, most reports have employed the ISGLS definitions of PHLF (Table 2). In addition to the latter definitions, our grading system also includes information about the management strategies that are typically employed to treat each PHLF grade (Table 2).

Bile leakage (BL) is a major complication of liver resection. The incidence of BL is reported to be 4.0% to 17%[20], and a previous meta-analysis did not find any difference in the incidence of BL between open and laparoscopic cases[21]. BL is defined as an increased bilirubin concentration in the drain or intra-abdominal fluid; i.e., a bilirubin concentration at least 3 times greater than the simultaneously measured serum bilirubin concentration[22]. Once BL develops, it can sometimes lead to complications and can become difficult to manage without interventional radiology (IVR). One of our representative Grade C cases is shown in Figure 1. BL is usually managed with extensive IVR, and reoperations are rarely required. The ISGLS has also developed a grading system for BL[22]. Although the different grades of PHLF are well defined based on clinical symptoms and the management strategies employed, the definitions of each BL grade are too subjective. Therefore, our grading system includes clinical examples (Table 3). 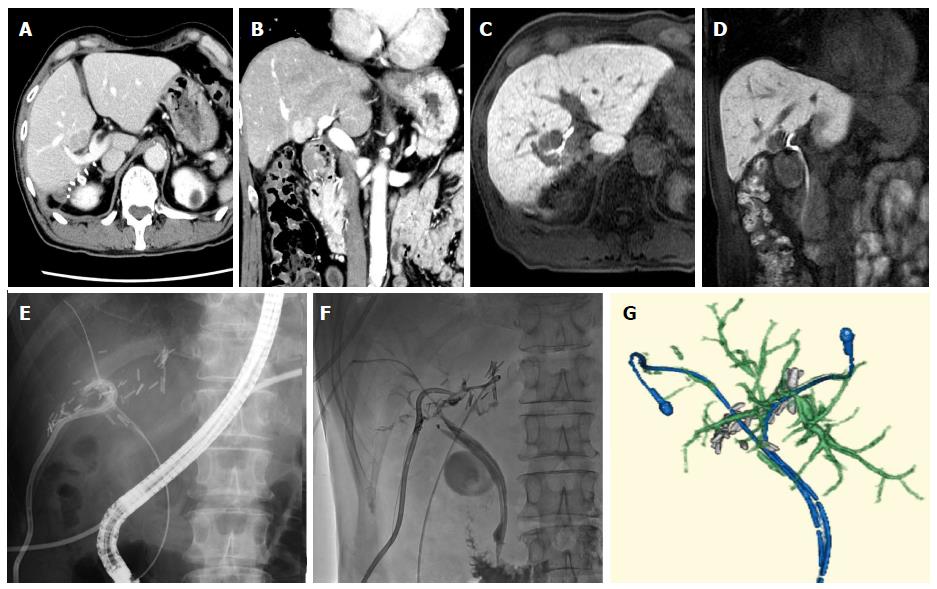 Figure 1 Representative grade C case in bile leakage. A 67-year-old man had hepatocellular carcinoma (diameter: 2 cm; A: Axial view; B: Coronal view) in segment S5 of his liver (located at the bifurcation of the bile duct in the hilar plate) (C: Axial view; D: Coronal view). The tumor was resected via enucleation; E: Bile leakage was detected and so endoscopic retrograde cholangiodrainage was performed together with percutaneous drainage of the resected pouch; F: Subsequently, stenosis of the left hepatic duct due to bile duct ischemia occurred. Percutaneous transhepatic cholangiodrainage was performed via the B3 duct; G: Three-dimensional reconstruction based on CT images obtained before the patient was discharged from hospital. CT: Computed tomography.
ACUTE RENAL FAILURE

Acute renal failure (ARF) is associated with various postoperative complications. Renal failure is closely associated with PHLF and can lead to hepatorenal syndrome (HRS). The International Ascites Club (IASC) defined HRS using the following criteria[23-25]: (1) cirrhosis and ascites are present; (2) the patient’s serum creatinine level is greater than 1.5 mg/dL (or 133 mmol/L); (3) no sustained improvement in the serum creatinine level (to a level of 1.5 mg/dL or less) is seen at least 48 h after diuretic withdrawal and volume expansion with albumin (recommended dose: 1 g/kg body weight per day up to a maximum of 100 g of albumin/d); (4) shock is absent; (5) the patient is not currently taking nor have they recently been taking nephrotoxic drugs; (6) parenchymal kidney disease, as indicated by proteinuria of greater than 500 mg/d, microhematuria ( > 50 red blood cells/high power field), and/or abnormal renal ultrasonography, is absent (Verna EC1, Wagener G, Renal interactions in liver dysfunction and failure).

On the other hand, post-liver resection ARF is still poorly defined. Therefore, we have proposed a grading system for post-liver resection ARF (Table 4). The management of ARF mainly involves dehydration and the use of diuretics[26]. Most cases of Grade A and Grade B ARF are reversible and manageable via the latter approach. We defined cases in which the patient could not pass urine without continuous diuretic use as Grade B. On the other hand, Grade C cases were defined as those in which the patient required hemodialysis.

Surgical site infections (SSI) are common after all types of surgery and are classified into superficial, deep incisional, and organ/space SSI. Although several classifications of SSI have been proposed[30], the definitions developed by the Centers for Disease Control and Prevention (CDC) are widely used internationally[31]. According to the CDC, SSI are infections that occur within 30 d of surgery or within one year if an implant is present[31]. In addition, one of the following criteria must be met: (1) purulent drainage from an incision (incisional infection) or from a drain below the fascia (deep infection); (2) a surgeon or attending physician diagnosing an SSI; (3) an infective organism being isolated from a culture of fluid or tissue obtained from the surgical wound (for incisional infections); (4) spontaneous dehiscence or a surgeon deliberately re-opening the wound in the presence of fever or local pain, unless subsequent cultures were negative, or an abscess being detected during direct examinations (for deep infections). However, the grading of SSI based on symptoms and the management strategy employed is difficult. Therefore, we proposed that SSI should be graded based on how long they take to cure (Table 7 for superficial SSI and wound dehiscence, Table 8 for deep and organ/space SSI). Using this new grading system, it is very easy and simple to grade SSI objectively.

Coagulation disorders are a common complication after liver resection[32,33]. Most coagulation and anti-coagulant factors are synthesized by the liver, and the ability to synthesize such factors rapidly deteriorates after liver resection in cirrhotic patients and those who experience marked hepatic volume loss[20]. In addition, most patients who are scheduled to undergo liver resection present with thrombocytopenia due to portal hypertension. Therefore, a prolonged prothrombin time, a prolonged thrombin time, elevated levels of fibrinogen degradation products, and a low platelet count are common after liver resection[34]. As we have mentioned in the ascites section, portal hypertension can occur after liver resection due to an increase in portal flow resistance[17]. Therefore, coagulation disorders should be divided into two different grades based on whether the patient displays normal or abnormal preoperative platelet levels (Table 9).

Postoperative pneumonia and respiratory disorder (PPN/RD) was rarely seen after liver resection recently except in the elderly cases[35,36]. Definition of the PPN/RD was shown in Table 10. Clinical sign of the PPN/RD is systemic inflammatory response syndrome with any radiological imaging findings[37]. Management will be taken by administrating susceptible anti-biotics with oxygen supply. Acute lung injury (ALI) is defined by PaO2/FiO2 ratios < 300 and acute respiratory distress syndrome (ARDS) is defined by PaO2/FiO2 ratios < 200[38]. In our grading, ALI is in Grade A and ARDS is in the grade B (Table 10). Our grading is not only defined PPN/RD after liver resection but also after other general surgery.

We thank Ms. Ayaka Saigo for her help with this article.