Reactivation of hepatitis B virus (HBV) during chemotherapy is a well known complication in patients with chronic hepatitis B and cancer. The clinical manifestations range from subclinical elevation of liver enzymes to severe, potentially fatal fulminant hepatitis. Reactivation can occur in a patient with previous inactive HBV infection; either an inactive carrier or a patient with resolved hepatitis. Everolimus is a mammalian target of rapamycin (mTOR) inhibitor approved in renal cell carcinoma, neuroendocrine tumours and breast cancer. mTOR inhibitors are a new generation of drugs for targeted treatment; therefore, little about their side effects is known. Here, we report a patient with renal cell carcinoma who experienced a flare of hepatitis B infection during treatment with everolimus. Clinicians should be aware of HBV reactivation in patients who are undergoing treatment with everolimus, and screening for hepatitis B infection and prophylactic antiviral treatment should be considered.

Reactivation of hepatitis B virus (HBV) during chemotherapy is a well known complication in patients with chronic hepatitis B and cancer. The clinical manifestations range from subclinical elevation of liver enzymes to severe, potentially fatal fulminant hepatitis[1]. Mammalian target of rapamycin (mTOR) inhibitors are a new generation of drugs for targeted treatment; however, little of their side-effects is known. As a result of their immunosuppressive properties, the mTOR inhibitors are associated with treatment-related infections. In Europe, the product information for everolimus warns patients about the risk of HBV reactivation, because this occurred in some patients taking everolimus[2]. Here, we report a case of renal cell carcinoma (RCC) in a patient who experienced a flare of hepatitis B during treatment with everolimus.

A 49-year-old man who had undergone partial nephrectomy in 2008 was diagnosed with RCC. He had been diagnosed as an inactive carrier of HBV more than 5 years previously. RCC progressed to lung and axillary lymph node metastasis in December, 2010. He was treated with bevacizumab 10 mg/kg every 2 wk, and interferon α 9 MU three times per week. He had partial remission in March, 2011 and continued treatment. He developed hypertension and did not want to continue bevacizumab and interferon in May, 2011. Computed tomography showed progression of lung metastasis in June 2011, and he started treatment with sunitinib 50 mg/d for 4 wk and 2 wk off. He had further progression in January, 2012 and was treated with everolimus, 10 mg/d. He had no further clinical and radiological progression. His liver enzymes were elevated in March, 2012 [aspartate aminotransferase (AST) 76 U/L, alanine aminotransferase (ALT) 115 U/L]. He continued everolimus treatment. One month later, liver enzyme levels continued to increase [AST 111 U/L, ALT 306 U/L, total bilirubin (TB)/direct bilirubin 0.39/0.1 mg/dL] and he was offered to continue everolimus with a dose reduction to 5 mg/d. At the end of May 2012, liver enzymes had increased to nearly 25-fold of the upper limits (AST 522 U/L, ALT 1038 U/L). Serological tests showed that the patient was positive for hepatitis B surface antigen. He was not using any other drugs that could have caused hepatitis reactivation. Treatment with everolimus was stopped immediately and he was referred to a gastroenterologist. He started treatment with an oral nucleoside analogue, tenofovir. Ten days later, he was submitted to another hospital with nausea, asthenia, and jaundice. Laboratory findings showed elevated AST (2014 U/L), ALT (1841 U/L), and TB (16.3 mg/dL). Prothrombin time was 14.8 s. HBV DNA level had markedly increased to 1.26 × 109 copies/mL. Hepatitis D virus DNA was negative. He continued treatment with tenofovir. Ultrasound imaging of the liver showed no metastatic disease. The liver enzyme levels decreased after 20 d and he was discharged from hospital.

Reactivation of hepatitis B is defined as the recurrence or an abrupt rise in HBV replication by at least an increase in serum HBV DNA levels of 1 log10, often with an increase in serum transaminase levels (at least threefold greater than the baseline, Figure 1). Reactivation can occur in a patient with a previous inactive HBV infection; either an inactive carrier or a patient with resolved hepatitis[3]. A recent annual nationwide survey confirmed that HBV reactivation related to immunosuppressive therapy is increasing in patients with malignant lymphoma, other haematological malignancies, solid tumours or rheumatological disease[1]. 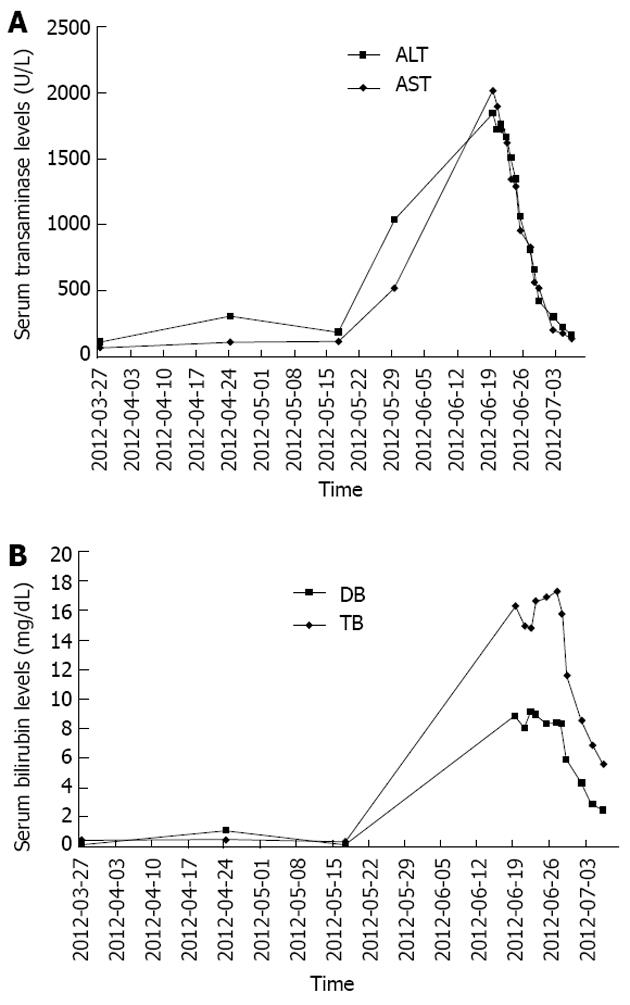 Everolimus is one of the newer targeted therapies approved for the management of RCC. Our clinical experience with this agent is limited. Data from clinical trials show that everolimus is associated with treatment-related infections. The European product information for everolimus states that some patients experience hepatitis B reactivation during treatment[2]. To our knowledge, no such case has been reported in the literature. Elevations of liver enzymes have also been reported during everolimus treatment, but grade 3/4 elevations of transaminase and bilirubin occurred in < 1% of patients[4]. Viral hepatitis should be considered in the differential diagnosis of patients with elevated liver enzymes, even if there is no history of viral infection.

Since everolimus and sirolimus (another mTOR inhibitor) are also used as immunosuppressive agents after liver transplantation[5,6], possible reactivation of hepatitis B in patients with chronic hepatitis should be monitored.

Previous studies have shown that the risk of HBV reactivation can be greatly reduced by the use of prophylactic nucleoside analogues in susceptible patients[13]. Lamivudine has proven efficacy and safety in preventing HBV reactivation related to chemotherapy. However, a major problem with prolonged usage of lamivudine is the possibility of viral breakthrough following the emergence of treatment-resistant HBV variants[14]. New generation oral nucleoside analogues, such as entecavir or tenofovir, exhibit high potency and low rates of resistance. These drugs are thought to be effective for treatment of HBV reactivation[1].