METHODS: From 2005 to 2011, 12 patients (9 men and 3 women, mean age 59 years, median 63 years, range 33-78 years) underwent radiological treatment for high-output PF associated with peripancreatic fluid collection. The percutaneous procedures were performed after at least 4 wk of unsuccessful conservative treatments. We chose either a one or two step procedure, depending on the size and characteristics of the fistula and the fluid collection (with an arbitrary cut-off of 2 cm). Initially, 2 to 6 pigtail drainages of variable size from 8.3 (8.3-Pig Duan Cook, Bloomington, Indiana, United States) to 14 Fr (Flexima, Boston Scientific, Natick, United States) were positioned inside the collection using a transgastric approach. In a second procedure, after 7-10 d, two or more endoprostheses (cystogastrostomic 8 Fr double-pigtail, Cook, Bloomington, Indiana, United States in 10 patients; covered Niti-S stent, TaeWoong Medical Co, Seoul, South Korea in 2 patients) were placed between the collection and the gastric lumen. In all cases the metal or plastic prostheses were removed within one year after positioning.

RESULTS: Four out of 12 high-output fistulas fistulas were external while 8/12 were internal. The origin of the fistulous tract was visualised by computer tomography (CT) imaging studies: in 11 patients it was at the body, and in 1 patient at the tail of the pancreas. Single or multiple drainages were positioned under CT guidance. The catheters were left in place for a varying period (0 to 40 d - median 10 and 25th-75th percentile 0-14). In one case external transgastric drainages were left in place for a prolonged time (40 d) due to the presence of vancomycin-resistant bacteria (Staphylococcus) and fluconazole-resistant fungi (Candida) in the drained fluid. In this latter case systemic and local antibiotic therapy was administered. In both single and two-step techniques, when infection was present, we carried out additional washing with antibiotics to improve the likelihood of the procedure’s success. In all cases the endoprostheses were left in situ for a few weeks and endoscopically removed after remission of collections, as ascertained by CT scan. Procedural success rate was 100% as the resolution of external PF was achieved in all cases. There were no peri-procedural complications in any of the patients. The minimum follow-up was 18 mo. In two cases the procedure was repeated after 1 year, due to the onset of new fluid collections and the development of pseudocysts. Indeed, this type of endoprosthesis is routinely employed for the treatment of pseudocysts. Endoscopy was adopted both for control of the positioning of the endoprosthesis in the stomach, and for its removal after resolution of the fistula and fluid collection. The resolution of the external fistula was assessed clinically and CT scan was employed to demonstrate the resolution of peripancreatic collections for both the internal and external fistulae.

CONCLUSION: The percutaneous placement of cistogastrostomic endoprostheses can be used for the treatment of PF that cannot be treated with other procedures.

Postoperative pancreatic fistula (PF) is a possible complication of acute or chronic pancreatitis, partial pancreatectomy, or trauma to the pancreatic duct during upper abdominal surgery, pancreatic biopsy, or blunt abdominal trauma. PF may lead to prolonged hospitalization, increased costs, and mortality. PFs occur in about 10% to 28% of patients who undergo pancreatic resection[1]. PFs may be internal or external, and therapeutic options for both can be conservative (medical), endoscopic, percutaneous (under radiological guidance), or surgical.

Closure of external PFs is mainly achieved by medical therapy. In selected patients who have failed with less invasive procedures, surgical treatment maybe provided, with good results, but also with significant mortality rates[1]. Improvements in both skill levels and in medical devices, have progressively increased the success rate of endoscopic methods[2,3]. Nonetheless, some patients must be excluded from these procedures, mainly for technical reasons. In such rare cases, for example when the pancreatic duct cannulation is difficult for anatomical reasons or because of the patient’s clinical condition, the percutaneous approach is possible and may be favored.

On the basis of twelve personal cases, we propose a percutaneous radiologically guided technique for treatment of PFs, which can be used when other procedures are not indicated or would be ineffective. This method seems to be extremely helpful in achieving a complete resolution.

From 2005 to 2011, 12 patients (9 men and 3 women, mean age 59 years, median 63 years, range 33-78 years) received radiological treatment for high-output PF associated with peripancreatic fluid collection. The percutaneous procedures were performed after at least 4 wk of inconclusive conservative treatments (total parenteral nutrition with nasojejunal tube and administration of somatostatin analogues). All patients underwent abdominal computed tomography scans in order to demonstrate the origin of the fistulous tract and to evaluate the fluid collection. In our series of patients the surgeon, in consultation with the endoscopist, considered cannulation of the pancreatic duct to be contraindicated and decided to try a percutaneous radiological approach.

All procedures were performed by an expert interventional radiologist. Depending on the dimensions of the fluid collection, we adopted two different possible procedures (Figure 1). 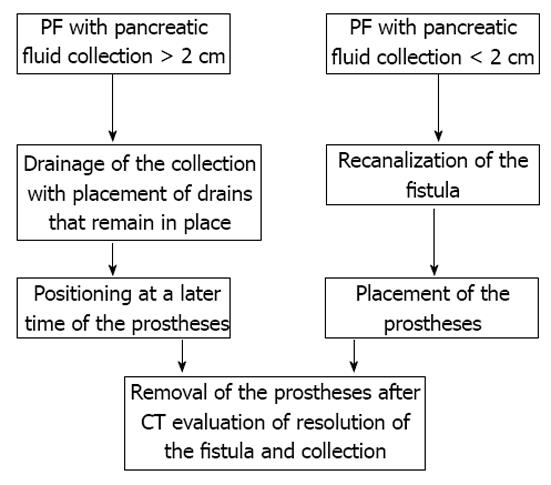 Figure 1 Flow chart of two-step (on the left) and one-step (on the right) procedures. PF: Pancreatic fistula; CT: Computer tomography.

Figure 2 Diagnostic enhanced computer tomography scan (A), and un-enhanced computer tomography scan scans (B, C) performed during interventional procedure. A: Patient developed a pancreatic fistula and abdominal fluid collection after surgery for pancreatic neoplasm; B, C: Percutaneous approach, was then adopted: images show trans-gastric puncture (B) and the access and placement of 2 drains in the collection(C).

The first step of the procedure was a trans-gastric CT-guided puncture of the collection using a 18 G Chiba needle (Figure 2B). Through this needle a rigid guide (extra stiff Amplaz 0.035 inch Cook, Bloomington, Indiana, United States) was inserted, and a sufficient number of drains introduced. Correct positioning was verified by CT scan. Then, the drainage was removed and the prostheses placed under fluoroscopic guidance (Figure 3).

Figure 4 The external fistula opens on the skin surface (A), a catheter has been positioned through the fistula (B) and two prostheses have then been placed through these two guides (C).

Then, under fluoroscopic guidance, the cannula was pushed into the gastric lumen, the mandrel removed, and a new guide/s inserted, as described in the literature[4].Thus, using a prosthesis, a by-pass is created between the origin of the fistula and the lumen of the stomach. The procedure (performed under local anesthesia associated with a mild analgo-sedation Remifentanil and Midazolam based) was carried out under endoscopic surveillance. Prosthesis positioning follow-up was guided by CT (Figure 3B and C). In all cases, the metal or plastic prostheses were removed within one year after positioning. Recently a new device (Niti-S stent covered, TaeWoong Medical Co., Seoul, South Korea) has been introduced into clinical practice consisting of a self-expandable, coated, removable Nitinol metal stent, spool-shaped, 2 cm long, narrower in the central portion (12 mm) and wider at the ends (29 mm) (Figure 3A). This device, positioned between the collection and the gastric lumen, does not clog simply because it is large. We employed this tool in the last two patients. It will probably replace the plastic prostheses in the treatment of pancreatic fistulas.

The patients’ characteristics are shown in Table 1. In all patients, one or more drains were positioned under CT guidance (Table 1). Four of the 12 fistulas were external while 8/12 were internal, all were high-output fistulas. External fistulas occurred in 2 patients with pancreatitis, and in 2 other patients post-surgical drainage. In all patients the CT examination showed a discontinuity of the main pancreatic duct, allowing us to localize the origin site of the fistula: this origin was at the body in 11 patients and at the tail of the pancreas in 1 patient. The catheters were left in place for 0 to 40 d (median 10 and 25th-75th percentile 0-14). The longest period was in a case showing the presence of vancomycin-resistant bacteria (Staphylococcus) and fluconazole-resistant fungi (Candida) in the drained fluid. In this case systemic and local (via catheter) antibiotic therapy was administered. The endoprostheses were left in situ for few weeks and endoscopically removed after remission of collections, demonstrated by CT scan.

The resolution of external PF was achieved in all cases, and there were no peri-procedural complications. In two cases the procedure was repeated after 1 year using new external drains, following the onset of pseudocyst and new fluid collections.

The percutaneous method we have described, seems to be extremely promising for achieving a complete resolution of PF under radiologic guidance.

Even though PF is a frequent complication of pancreatic resection, its management is still not standardized[3]. PFs may be internal or external and both result from leakage of pancreatic juice from a disrupted pancreatic duct. External PFs extend from the pancreas (or peripancreatic fluid collection) to the skin surface, and a pancreatic fluid collection is frequently associated with a fistula. On the basis of the amount of secretions, PFs are classified into high-output (> 200 mL per 24 h), and low-output (< 200 mL per 24 h) type[1].

The choice of treatment depends on the characteristics the patient and the fistula. The overall success rate of the medical approach is high, 68%-100% of cases[1], and in failed cases, endoscopic treatment has been suggested as a reasonable next step to achieve healing a PF within a few weeks[4]. Surgical treatment is indicated only for patients who have failed the less invasive attempts and has a success rate of about 90%-92%, but with a significant mortality rate of 6%-9%[1]. Endoscopic procedures include various drainage techniques, comprehensive cannulation of the injured pancreatic duct and stent positioning. The case studies reported in the literature, however, involve few patients, and success is dependent on the experience of physicians[2,5].

Some patients are not eligible for the above mentioned treatments, mainly due to technical limitations of endoscopic retrograde cholangio pancreatography, related to duodenal and pancreatic duct stricture or post-surgical anatomy, that make duct cannulation complex or impossible[6].

In these patients radiological treatment can be considered although not all cases are eligible, as with other minimally invasive methods. The interventional radiologist evaluates each case, and when the access is adequate, may decide to use the method described above, a procedure already well established in cases of pancreatic pseudocyst and characterized by low complication and mortality rates. The prostheses are left in position for a few weeks to allow the normal flow or egress of pancreatic juices into the gut, facilitating the closure of the fistula. In our experience, this technique allows the resolution of the fistula without significant complications. Obviously, the cases treated were few because this procedure is rarely necessary. However, we have described this technique because we believe that it can be a feasible option or may be used in addition to other treatments.

The pancreatic fistula (PF) is a possible complication, especially in pancreatic surgery, still associated with a significant mortality. In almost all cases, medical therapy leads to healing but problems exists in a few cases. These patients have different treatments options. The procedure described here is an additional alternative that does not exclude other therapeutic options.

Modern surgery of the pancreas is still burdened with complications, such as fistulas, and the challenge is to reduce resulting mortality. The minimally invasive procedures proposed in the literature are all based on only a few cases. The procedure described here fits into the puzzle of customized treatments.

The technique represents a further option within the framework of minimally invasive procedures of intractable fistulas in selected patients. This procedure does not preclude surgery or other treatments.