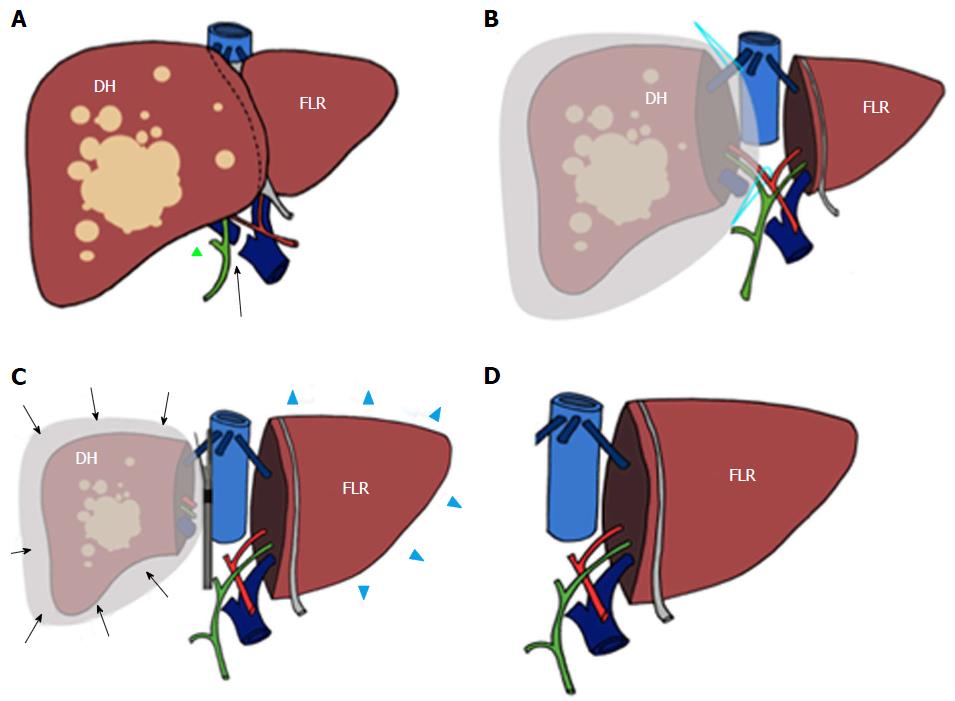 Figure 1 Scheme of trisectionectomy associating liver partition and portal vein ligation procedure. During surgical stage 1 the right portal vein is sectioned and sutured (arrow in A) after performing cholecystectomy (green triangle in A). Subsequently, the diseased hemiliver (DH) is sectioned from the future liver remnant (FLR) and wrapped with a bag (B). At the time of surgical stage 2 (C), hypertrophy of the (FLR) (blue arrowheads in D) and atrophy of the DH (arrows) have been obtained. Associating liver partition and portal vein ligation for staged hepatectomy procedure is then completed by removing the DH (D). 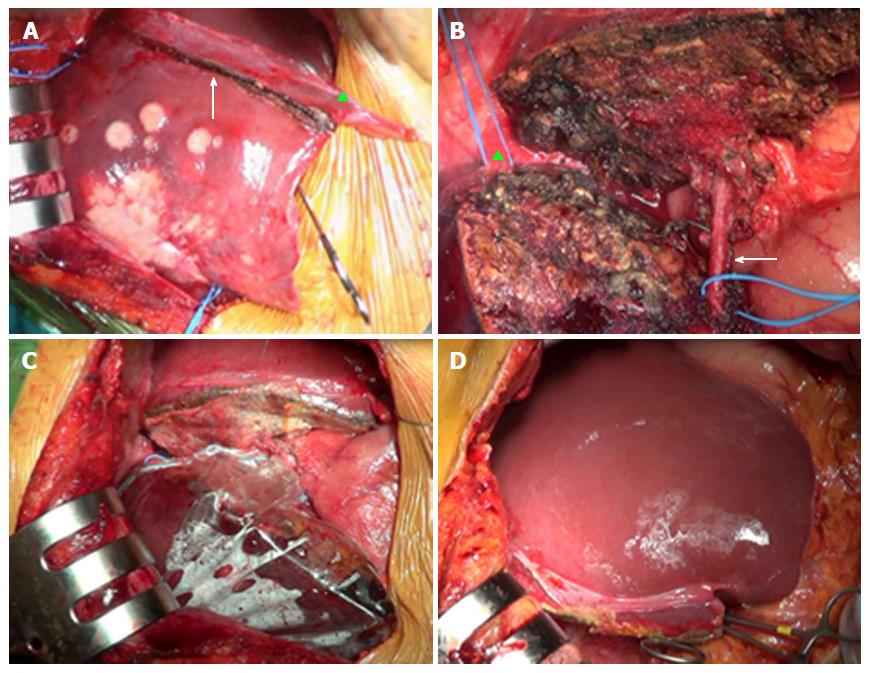 Figure 2 Surgical overview of the associating liver partition and portal vein ligation for staged hepatectomy procedure. A: Intraoperative findings during stage 1, with evidence of resection line (arrow) on the right side of ligamentum falciforme (green triangle); B: Resected liver with right hepatic vein (green triangle) and right hepatic artery (arrow) encircled by a vessel loop to simplify their identification during stage 2; C: After transection, diseased hemiliver is enveloped with a plastic bag; D: Pronounced hypertrophy of future liver remnant during intraoperative stage 2.

Figure 3 Radiologists should carefully report the number, size, and location of individual lesions, as well as their relationship with surgically relevant anatomic structures, including the hepatic artery, main portal branches, hepatic veins, and first- to second-order biliary branches. A: Preoperative assessment with computed tomography in a 64 male years old patient showing colorectal metastases on the right hepatic lobe (red arrow). Right trisectionectomy associating liver partition and portal vein ligation for staged hepatectomy was planned; B: One small satellite lesion was found on the left side of the middle hepatic vein (arrowhead), indicating the need for future liver remnant clean-up during stage 1; C: No vascular involvement was shown, as exemplified by patent main portal trunk and intrahepatic branches (green triangle), except for infiltration of the middle hepatic vein (double green triangle). Based on this finding, a wide free margin between the line of resection and the middle hepatic vein was obtained. 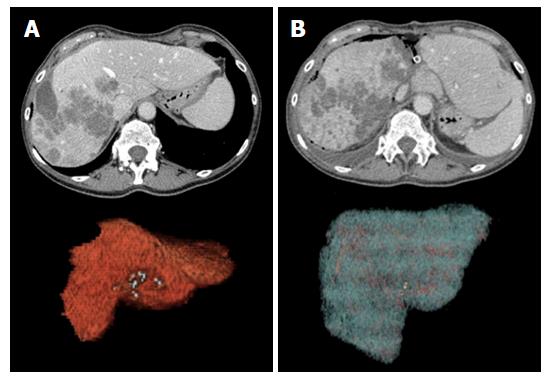 Figure 4 Evolution of the future liver remnant (liver segments 2 + 3) before (A) and after stage 1 surgery (B). Future liver remnant remnant almost doubled in volume (from 280 cm3 to 468 cm3), showing clear enlargement on 2D images and volume rendering reconstructions.

Figure 5 Normal findings on computed tomography after stage 1 surgery on transverse (A) and coronally-reformatted images (B), as well as volume rendering 3D reconstruction (C) (right trisectionectomy associating liver partition and portal vein ligation for staged hepatectomy). A thin rim of free fluid with air bubbles is visible along the surface of diseased hemiliver (right liver lobe), suggesting its accumulation within the plastic bag (green triangle on A and B). A similar finding can be appreciated along the line of transection. Mild periportal edema (yellow arrowhead in A), thin hypodense bands along the edges of surgical resection (arrows on both A and B) and drains (blue arrowheads) are visible. Main right portal branch was ligated and transected (thick arrow in C). Hepatic artery branches are patent (C), including right hepatic artery, which shows mild hypertophy (arrowhead), and left hepatic artery (thin arrow). 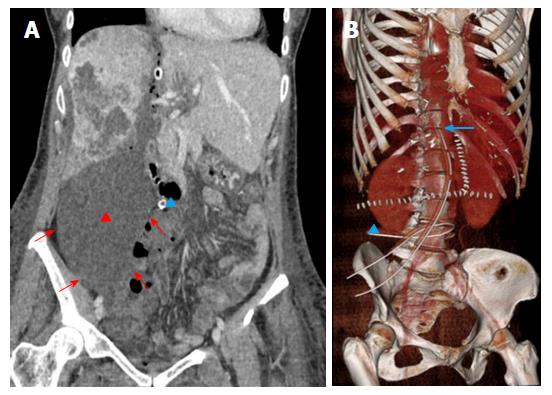 Figure 6 Biloma in a 49-year-old female patient who underwent associating liver partition and portal vein ligation for staged hepatectomy because of peripheral cholangiocarcinoma of the right liver lobe. A: Computed tomography was performed because of bile flowing from the right drainage (blue triangle). The examination confirmed a large fluid collection beneath the DH (red triangle), which distended the plastic bag (red arrows). Biloma was removed with the DH during stage 2 surgery, resolving the biliary leakage originating from right transection surface; B: Normal position of the two drains on volume rendering reconstruction. Left drain has a vertical course along the line of transection up to the inferior margin of the diaphragm (arrow). Right drain has an horizontal course beneath DH (triangle), with its his placed within the plastic bag, in order to drain collections. DH: Diseased hemiliver. 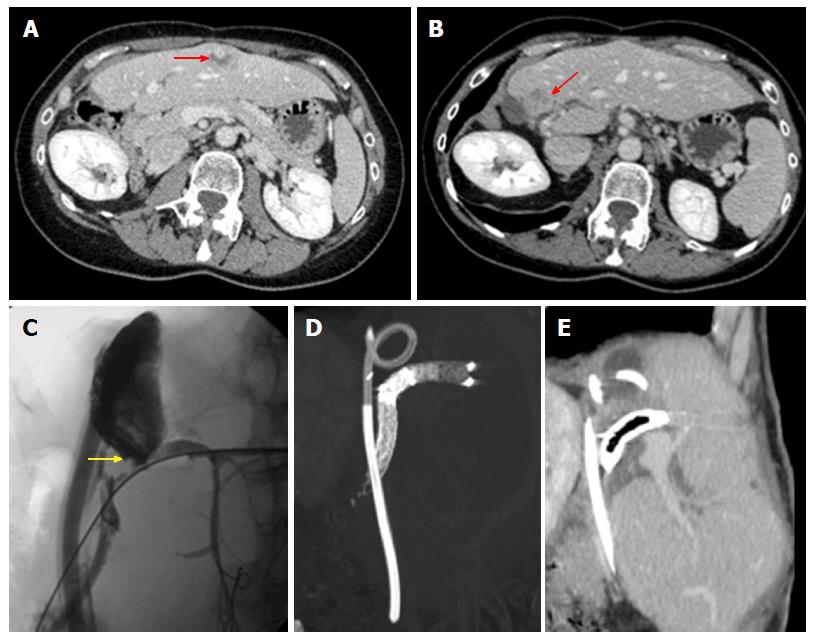 Figure 9 Recurrence appears with multidetector computed tomography and/or magnetic resonance imaging signs of the original tumor, though recurrence can manifest with pleomorphic, nonspecific appearance in our experience. A, B: Multifocal recurrent cholangiocarcinoma presenting 16 mo after right trisectionectomy associating liver partition and portal vein ligation for staged hepatectomy. Lesions showed atypical persistently hypovascular appearance on dynamic contrast-enhanced multidetector computed tomography; C-E: Wedge resection of recurrences was complicated by biliary leakage, as shown on percutaneous transhepatic cholangiography (arrow in C), treated by positioning a drainage within the biloma and a biliary stent graft, as shown on maximum intensity projection reconstruction in D and oblique sagittal reformation in E.