METHODS: Patients with cirrhosis (n = 43), and healthy volunteers (n = 40) were recruited to the study. Mononuclear cells were isolated and cultured from the peripheral blood of controls and cirrhosis patients. Fibroblast-like cells that appeared in cultures were analyzed for morphological features, enumerated by flow cytometry and confirmed by immunocytochemistry (ICC). Colony forming efficiency (CFE) of these cells was assessed and expressed as a percentage.

CONCLUSION: These results indicate the presence of circulating CD90+ CD73+ CD45- cells in patients with liver cirrhosis that have the potential to proliferate at a higher rate.

Cirrhosis of liver is a progressive disease characterized by replacement of liver parenchyma by fibrous tissue, parenchymal nodules and vascular distortion leading to major systemic complications and end stage liver disease[1]. Cirrhosis often progresses to hepatocellular carcinoma, the fifth most common cancer in the world and comprises more than 90% of human liver cancers[2,3]. Although alcohol and chronic viral hepatitis are the main causes of liver cirrhosis[4], cryptogenic cirrhosis is encountered in 5%-30% of cirrhotic patients[5]. Cirrhosis is an irreversible condition and liver transplantation is the only available treatment. Shortage of donor organs demands new strategies for treating end stage liver disease. Cell based therapy has emerged as a novel approach in treating many human diseases including chronic liver disease. Expansion of embryonic stem (ES) cells, existing hepatocytes from the liver, and progenitor cells from bone marrow are techniques currently under investigation for regeneration of hepatocytes. However, therapeutic use of hepatocytes and ES cells is limited due to inadequate proliferation of mature hepatocytes, ethical and tumorigenic issues of ES cells and the requirement for immuno suppression[6]. Recently, hematopoietic CD34+ cells mobilized from the bone marrow were demonstrated to have the potential to form hepatocyte-like cells and infusion of 1 × 106 - 2 × 108 CD34+ cells into the portal vein showed clinical improvement in patients with cirrhosis[7]. Although recent studies suggest greater potential of mesenchymal stem cells (MSCs)[8], there are very few reports of therapeutic use of MSCs for the treatment of chronic liver diseases including cirrhosis.

MSCs are non-hematopoietic and express CD90, CD73, and CD105 as their surface antigens[9]. Several studies have shown that MSCs possess the intrinsic ability to localize to injured tissues and actively participate in tissue repair. Transforming growth factor β family members and Wnt signaling were found to play important roles in MSCs-mediated tissue repair[10,11]. Although recruitment of various populations of hematopoetic progenitor cells has been reported in cirrhosis[12], there are very few reports indicating the role of circulating MSCs in the regeneration of hepatic tissue in cirrhosis. Recent data indicate the broader potential of MSCs for differentiation into mesoderm, neuroectoderm and endoderm characteristics under in vitro conditions[13]. The aim of the present study is to identify circulating CD90+ CD73+ CD45- cells (mesenchymal stem cell-like cells) in patients with cirrhosis and to evaluate their in vitro proliferating abilities.

Eighty three subjects from the Asian Institute of Gastroenterology, Hyderabad were recruited to the study. Participants, diagnosed for cirrhosis (n = 43, Male: 31) by standard clinical and imaging criteria, formed the study group. Healthy volunteers (n = 40, Male: 30) with no known pre-existing liver disease formed the control group. The study protocol was approved by the institutional review board, and all the subjects gave informed consent. Peripheral blood samples (10 mL in EDTA) were collected from all individuals for isolation of mononuclear cells (MNCs). Isolated MNCs were cultured and their proliferating abilities and colony forming potentials were evaluated in both groups.

Culture-derived adherent cells from cirrhosis, and controls were harvested using trypsin, diluted in complete medium and plated at 100 cells per T 25 flask. Cells were incubated for 14 d in DMEM supplemented with 10% FBS. After 14 d, the colonies were stained with 0.5% crystal violet in methanol for 5 min. The plates were washed and visible colonies were counted and colony forming efficiency (CFE) was calculated. The colonies that were less than 2 mm in diameter or faintly stained were excluded[15]. CFE was defined as the number of colonies divided by the number of cells seeded and expressed as percentage. The colonies formed were also stained with anti CD90 antibodies to check specificity.

The results were subjected to analysis of variance using SPSS version 13.0 (SPSS, Chicago, Ill) and expressed as mean ± SD. The Student t-test was used to determine the likelihood of a significant difference (P < 0.05) between the two groups.

The clinical and demographic characteristics of the subjects studied are shown in Table 1. Control group (n = 40; Male = 30, Female = 10; Age = 52.42 ± 8.7 years) were subjects with no known liver disease and the study group (cirrhosis patients) (n = 43; Male 31, Female = 12; Age = 60.4 ± 12.8 years) were individuals attending a hepatology clinic with clinical features suggestive of cirrhosis confirmed by abnormal liver function tests and ultrasonography. All the patients had esophageal varices suggesting portal hypertension. Cirrhosis in these patients was due to alcohol consumption, or cryptogenic. Significantly elevated levels (P < 0.01) of AST, ALT (2-3 times of upper normal limit) was observed in the cirrhosis patients as compared to control group. Cirrhosis patients also exhibited low albumin, raised globulins and INR. Imaging investigations revealed increased echogenicity, nodular liver, splenomegaly, and dilated portal vein ≥ 14 mm. Cirrhosis patients were categorized based on their CP score (Table 1). Control subjects showed no abnormality in either imaging or in laboratory findings.

The number of CD90+ CD73+ CD45- cells obtained from cirrhosis patients increased in the cultures (7.09%) compared to control cultures (0.48%) as detected by flow cytometry. Cultures from the control group showed a negligible number of cells expressing CD90+ CD73+ CD45- surface antigen while the expression of these antigens more than 5 times in the cultures of cirrhosis patients and was significant (P < 0.001) as shown in Table 1 and Figure 1. 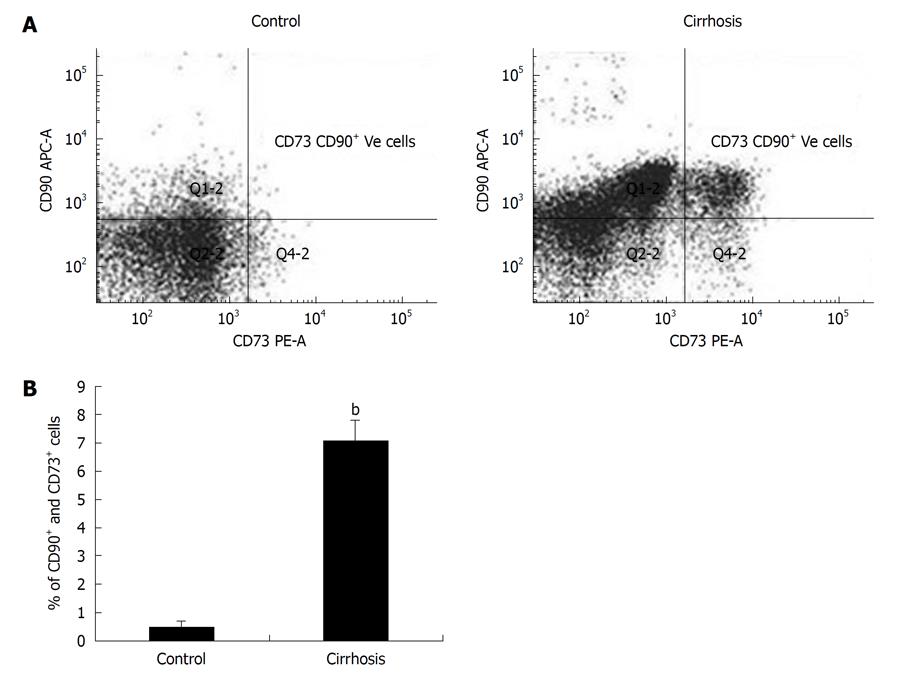 Adherent Cells were expanded in culture medium for 14 d in both cirrhosis, and control subjects. After 3-4 d, fibroblast-like cells (spindle shape with nucleus under phase contrast microscopy) appeared and increased in number in the cultures of cirrhosis patients (Figure 2), in contrast to control group cultures where the number of cells did not increase after 1 wk. 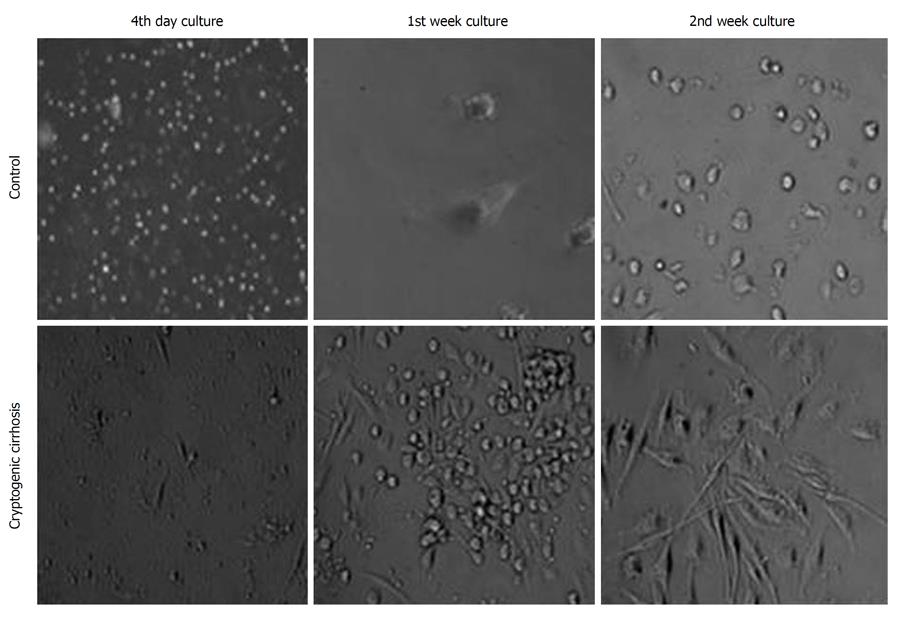 In addition to flow cytometry, ICC was performed to confirm the CD90 surface expression on cells cultured from cirrhosis patients. Cells stained strongly positive for CD90 in cirrhosis-derived cultured cells (Figure 3). CD90 expression was not observed in control cultures.

Figure 3 Immunocytochemistry of cells in cultures. The cells from control and cirrhosis cultures were immuno-stained with anti CD90 (APC) antibody, immunofluorescent images were captured at 400 × magnification. The cells showed the presence of CD90 (stained in red) and nuclei stained blue.
CD90+ CD73+ cell cultures from cirrhosis patients exhibited CFE

There was a significant increase in CFE of cells obtained from cirrhosis patients (12 times) as compared to control cell cultures (Figure 4). The cultures from the control group did not show CFE and no colonies were observed. The increase in the number of CD90+ CD73+ cells in culture and their CFE indicate that the proliferation rate was higher in cirrhosis patients compared to controls. 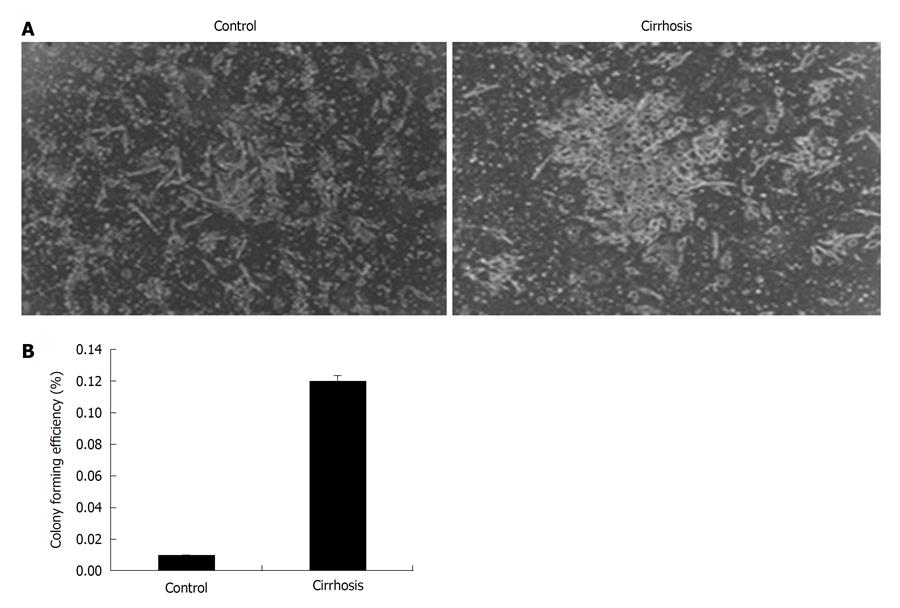 The objective of the present study was to identify the presence of circulating CD90+ CD73+ CD45- cells in cirrhosis patients and to evaluate their proliferating abilities. The results obtained demonstrate that (1) the number of CD90+ CD73+ CD45- cells increased in cultures of cirrhosis patients as compared to controls; and (2) their proliferation rate and CFE were enhanced suggesting that these cells may form a source for therapeutic applications.

The presence of CD90+ CD73+ CD45- cells in peripheral blood cultures from cirrhosis patients without pre-treatment with G-CSF suggests availability of these cells in the circulation of these patients. This observation is in accordance with an earlier finding that such cells are attracted from bone marrow to the site of injury for the purpose of regeneration[17,18]. It is reported that MSCs induce peripheral tolerance and migrate to injured tissues, where they can inhibit the release of pro-inflammatory cytokines and promote the survival of damaged cells[19]. Although circulating mesenchymal cells are reported to migrate to the site of injury, their homing properties and capacity to normalize the diseased tissue function need to be studied. The proliferating ability of CD90+ CD73+ CD45- cells obtained from cirrhosis patients was evident by the appearance of fibroblast-like cells by day 4 in culture (Figure 2) and not in controls. The significant (P < 0.001) increase in the number of CD90+ CD73+ CD45- cells in cultures from cirrhosis patients and their CFE indicate increased proliferation of CD90+ CD73+ CD45- in cirrhosis. The gold standard assay that is used to identify MSCs is the colony forming unit-fibroblast assay which, at a minimum, identifies adherent, spindle-shaped cells that proliferate to form colonies[20].

Cellular therapies, including stem cells, require that the source of cells is easily accessible, has the ability to expand under culture conditions and can demonstrate their transplantation ability. In this report, we are able to show that CD90+ CD73+ CD45- cells are present in the peripheral blood of cirrhosis patients, which is very easily accessible and that they are able to proliferate and form colonies under culture conditions. As per current knowledge, among the cell types involved in liver regeneration, mature hepatocytes and intra ductal progenitors find limited use in cellular therapy because of their lesser proliferating abilities[21]. In response to sustained hepatocytic necrosis upon severe injury, stem cells from bone marrow, possessing greater proliferating and differentiating capabilities, enter the liver through portal and periportal distribution as an intermediate cell population and mature into hepatocytes[22].

Bone marrow is a rich source of circulating stem cells for both hematopoietic and mesenchymal cells. Earlier studies demonstrated the use of CD34+ cells in cell-based therapy for cirrhosis and showed that infusion of 1 × 106 -

Though hematopoietic stem cells form the major source of cells for tissue regeneration, recent data suggest broader potential for MSCs[8]. A recent study reported a deficient proliferation of bone marrow-derived mesenchymal cells in patients with chronic hepatitis B viral infection and cirrhosis of the liver[23]. Hence, in this study, we have isolated and cultured peripheral blood MNCs from idiopathic cirrhosis patients. The data presented in this report reveal that circulating mesenchymal-like cells are present in cirrhotic patients and that they proliferate at a higher rate. This important feature of circulating mesenchymal-like cells in cirrhosis patients may allow us to proliferate these cells under controlled conditions and differentiate them into mature hepatocytes. Another important feature of circulating mesenchymal-like cells in cirrhosis is that since their proliferation rate is high, administration of G-CSF for 4-5 d may not be required. In conclusion, our preliminary results indicate that circulating CD90+ CD73+ CD45- cells may serve as another easily approachable, alternative cell source that can be used for autologous cell transplantation in cirrhosis patients, and forms a basis for future applications in the wider perspective. Further, these cells need to be evaluated for safety and efficacy using animal models.

Liver transplantation is the gold standard treatment for various end-stage hepatic diseases but it is hindered by the lack of donor organs and by complications associated with rejection and immune suppression. There is increasing evidence to suggest that circulating mesenchymal and hematopoietic stem cells are a transplantable cell source for liver diseases. The aim of this study was to identify circulating CD90+ CD73+ CD45- cells in cirrhotic patients and evaluate their in vitro proliferating abilities.