AIM: To elucidate whether CCK receptors exist in lung tissues and their precise cellular localization in the lung.

METHODS: CCK-AR and CCK-BR mRNA expression and cellular distribution in the rat lung were detected by highly sensitive method of in situ reverse transcription-polymerase chain reaction (RT-PCR) and conventional in situ hybridization.

CONCLUSION: CCK-AR and CCK-BR gene were present in pulmonary vascular endothelial cells, macrophages, bronchial epithelial cells and alveolar epithelial cells, which play an important role in mediating the regulatory actions of CCK-8 on these cells.

Cholecystokinin (CCK) is a gut-brain peptide that exerts a variety of physiological actions in the gastrointestinal tract and central nervous system (CNS) through cell surface CCK receptors[1]. CCK receptors have been pharmacologically classified into two subtypes CCK-A receptor (CCK-AR) and CCK-B receptor (CCK-BR) according to their affinity for the peptide agonists CCK and gastrin, which share the same COOH-terminal pentrapeptide amide sequence but differ in sulfation at the sixth (gastrin) and seventh (CCK) tyrosyl residues[2]. CCK-AR is highly selective to sulfated analogues of CCK and the antagonist L-364718, whereas CCK-BR has similarly high affinity to both sulfated and nonsulfated peptide analogues of CCK/gastrin peptides and the antagonist L-365260[2]. CCK-AR is found principally in the gastrointestinal tract and selective areas of the CNS, while CCK-BR is found principally in the CNS and selective areas of the gastrointestinal tract, on pancreatic acinar cells and parietal cells[3,4]. CCK binds to CCK-AR present on a variety of gastrointestinal target tissues including pancreatic acini, islets, gastric mucosa and gallbladder to induce pancreatic enzyme secretion, insulin secretion, release of pepsinogen and gallbladder contraction[5]. CCK-BR in the CNS regulates feeding, anxiety and memory, etc[3]. CCK-AR and CCK-BR are also expressed in the neoplastic cells such as pancreatic cancer cells[6,7], gastric cancer cells[8,9], colonic cancer cells[10] and small cell lung cancer cells[11-13] where they may stimulate cell growth. In addition, CCK-BR is also present on T lymphocytes[14,15] to regulate lymphocytes proliferation[16,17]. These data suggested that CCK receptors were widely distributed around various kinds of tissues and their presence provided the structural basis for CCK to exert a broad array of physiological action.

Our previous data demonstrated that CCK-8, as an intestinal neuropeptide, not only protected gastric mucosa against alcohol-induced injury[18-20], but also was a potent protective agent against acute lung injury by LPS[21,22]. It obviously reduced the pulmonary artery hypertention (PAH) and lessened the inflammatory lesion in lung tissues of endotoxin shock (ES) rats[21,22]. Moreover, CCK-8 could inhibit the reduction of endothelial-dependent relaxation of isolated pulmonary artery to acetylcholine (ACh) induced by LPS[23]. Stretton and Barnes reported that CCK-8 produced a concentration-dependent contractile response in guinea-pig trachea and this effect was antagonized by the CCK receptor antagonists dibutyryl cyclic guanosine monophosphate and L-364718[24]. These data indicated that there might be CCK receptors in the lung tissues to mediate the action of CCK-8. However, whether CCK receptors are present in lung tissues and their precise cellular localization remains unclear. In the present study, we detected the cellular localization of CCK receptors in the rats lung using highly sensitive method of in situ RT-PCR.

Healthy Sprague-Dawley rats (weighing 180-220 g BW) were anaesthetized with urethane (1 g/kg). Lung tissues were dissected from the rats. The inferior lobe of right lung was fixed in 4% paraformaldehyde for 1 h and embedded in paraffin for in situ hybridization and in situ RT-PCR.

The primers and probe of CCK receptor were designed according to Mostein's report[25]. The sequences of CCK-AR primers were 5'-CTCGCTCGCCCAGAACTCTACCAAGGAATCAAATTTGATGC-3' (sense) and 5'-CTGGTTCGGCCCATGGAGCAGAGGTGCTCATGTGGCTGTAG-3' (antisense). The sequences of CCK-BR primers were 5'-CTCGCTCGCCCAGAACTCTACCTAGGACTCCACTTTGA-3' (sense) and 5'-CTGGTTCGGCCCACGCACCACCCGCTTCTTAGCCAGCA-3' (antisense). The sequences of CCK-AR and CCK-BR probes were respectively 5'-CGGGGGCCGGGGACTTCTGCAAGTAACAGCCATCACTATCCTCATA-3' and 5'-AGCTACGCTGGTTACAGGCCGGCAGCCCCCGTT-3'. The oligonucleotide probes were labeled with alkaline phosphatase (Boehringer Mannheim). All the primers and probes were synthesized by Sangon Corporation (Shanghai).

The sections (5 μm) were baked and deparaffinized to water, and then treated with 0.2 mol/L HCl and EDTA. The slides were pretreated with 0.1% proteinase K at 37 °C for 12 min to prevent background staining and inactivate endogenous enzyme. Then the tissues were treated overnight in a Rnase-free DNAase solution (Boehringer Mannheim) at 37 °C. The in situ reverse trancription step was performed in 30 μL solution containing 2 μmol/L CCK-AR or CCK-BR primers and 1 U/mL AMV-RT at 42 °Cfor 1.5 h. Then the slides were overlain with 50 mL in situ PCR reaction mixture containing 1 × PCR buffer, 4.5 μmol/L MgCl2, 0.2 μmol/L dNTPs, 1 μmol/L each of primers, and 10 U Taq polymerase (Perkin Elmer). The PCR was performed at conditions of initial denaturation at 94 °C for 2 min, followed by 30 cycles of denaturation at 94 °C for 1.5 min, annealing at 55 °C for 1 min, and extension at 72 °C for 1 min. PCR-amplified products were detected with alkaline phosphatase (AP)-labeled CCK-AR and CCK-BR oligonucleotide probes (2 pmol/ml) at 37 °C for 24 h. The slides were then developed in NBT/BCIP solutions at room temperature for 48 h. To stop the color reaction, the slides were washed in distilled water and mounted with glycergel.

The procedure was carried out the same way as in situ RT-PCR, but without the RT-PCR steps.

RESULTS
The positive and negative controls of in situ RT-PCR

The rat brain sections expressed both CCK-AR and CCK-BR. The hybridization signal was present in the neuron. There was no positive signal in RNase-pretreated samples. Omission of AMV-RT, or Taq polymerase, or primers, or probes prevented specific staining (Figure 1, Table 1). 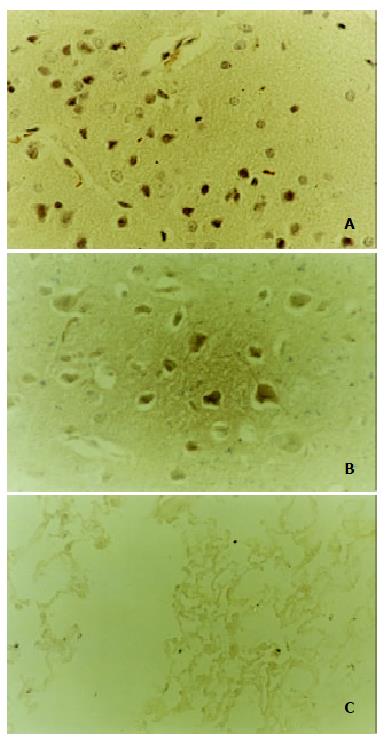 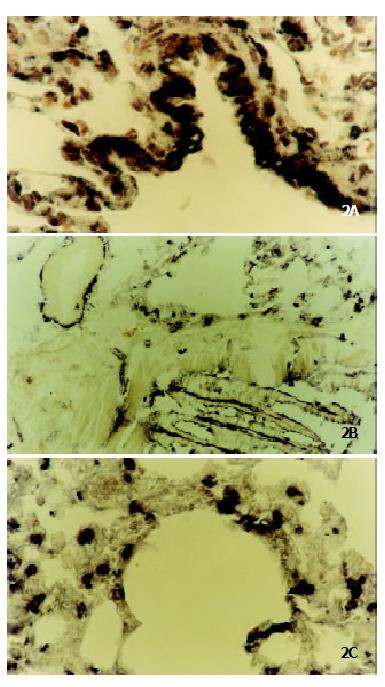 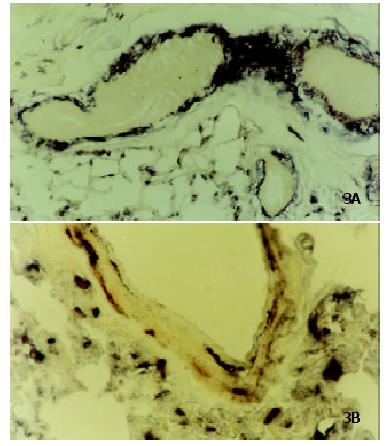 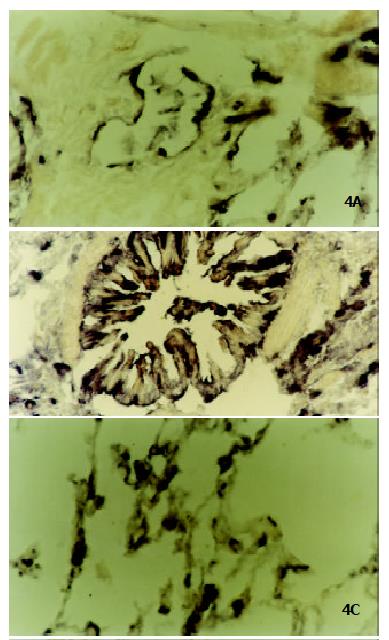 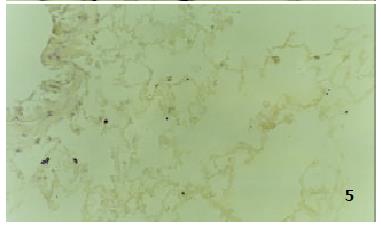 Figure 5 No positive signal of CCK-AR gene was detected in lung tissues by in situ hybridization (× 200).
DISCUSSION

In situ RT-PCR is a novel molecular biological technique that combines the high sensitivity of RT-PCR for generating a cDNA from small amounts of mRNA with cellular localization of in situ hybridization. The sensitivity of in situ hybridization is 10-20 copies per cell when detecting the single-copy and low-copy (less than 10 copies) target DNA or RNA in tissues, while using in situ RT-PCR could significantly enhance the sensitivity for detecting the target DNA or RNA[26]. In the present study, we detected the in situ expression of CCK receptors by two methods of in situ hybridization and in situ RT-PCR. By in situ hybridization, only little amount of CCK-BR gene staining was found in vascular endothelial cells and macrophages, whereas by in situ RT-PCR, both CCK-AR and CCK-BR mRNA expressions were detected in bronchial mucosal cells and alveolar epithelial cells other than endothelial cells and macrophages. Our results also demonstrated that the sensitivity of in situ RT-PCR was obviously higher than that of in situ hybridization. Large amounts of cDNA were amplified by specially designed target-specific primers and followed by hybridization with highly specific probes[27]. So the specific binding of nucleotide on the basis of base complementation was performed twice, which increased the specificity of in situ RT-PCR. High sensitivity and specificity made in situ RT-PCR a favorable technique to study the in situ expression and cellular distribution of target gene in tissues. To further ensure the specific results, we designed six negative controls: First, omission of AMV-RT prevented the positive staining, indicating that genome DNA was completely digested. Second, omission of Taq polymerase produced negative results, suggesting endogenous polymerase was inactive. Third, omission of primers produced weak positive reaction which was the results of little amounts of cDNA binding with specific probes, and it confirmed the specificity of the primers. Fourth, addition of RNase produced negative results, confirming that mRNA was detected during RT-PCR. Fifth, omission of specific probes and addition of nonspecific probes produced negative reaction, confirming the specificity of the probes. Sixth, addition of unlabeled specific probes prevented the positive staining, indicating that endogenous alkaline phosphatase was inactive.

Our present study also demonstrated existence of CCK-AR and CCK-BR gene expression in pulmonary macrophages. It is well known that activation of macrophages plays a critical role in inducing the inflammatory response[30]. Macrophages stimulated by LPS or other inflammatory factors produce and release large quantities of various proinflammatory cytokines including TNF-α, IL-1β, IL-6 etc. Overproduction of these cytokines can result in systemic inflammatory response syndrome (SIRS) and multiple organ dysfunction syndrome (MODS), which might lead to death[31]. So controlling the overactivation of macrophages may be an effective measure in preventing the generation and development of SIRS and MODS. In another study, we found that CCK-8 could inhibit LPS-induced TNF-α release and gene expression in rat pulmonary interstitial macrophages (PIMs) in vitro[32,33]. The study about its upstream signalling mechanisms demonstrated that CCK-8 inhibited LPS-induced NF-κB activity and IkB degradation in PIMs, which was abrogated by proglumide[33]. Furthermore, LPS-induced expression of LPS receptor CD14 on PIMs could be downregulated by CCK-8 in vitro[32]. These data suggested that CCK-8 might bind to CCK receptors on pulmonary macrophages to interfere with the activation of macrophages during inflammation. But the cellular signal transduction mechanisms through which CCK receptors mediated in macrophages were not fully clarified. Other than pulmonary macrophages, several functions of murine peritoneal macrophages were negatively modulated by CCK-8 including the production of superoxide anion, phagocytosis and mobility[34,35]. Therefore, CCK receptors on macrophages provide the structural basis for CCK-8 to regulate the functions and activation of macrophages, which may be beneficial to the control of inflammatory responses.

In summary, we successfully detected CCK-AR and CCK-BR mRNA expression in rats lung tissues and clarified their cellular localization using in situ RT-PCR. To our knowledge, this is the first report about the CCK receptors gene expression in lung tissues. CCK receptors present on pulmonary endothelial cells, macrophages, bronchial epithelial cells and alveolar epithelial cells play an important role in mediating effects of CCK-8 such as protecting endothelial cells against damages, inhibiting the overactivation of macrophage and regulating the pulmonary vascular tonus and bronchial tonus.