AIM: After transarterial chemoembolization (TACE), the residual cancer cells are under extensive hypoxic or even anoxic environment. Hypoxia can lead to adaptive responses. For example, angiogenesis will help these cells survive. In this study, we examined the effect of TACE on angiogenesis and expression of vascular endothelial growth factor (VEGF) and basic fibroblast growth factor (b-FGF) and to assess their relevance to Walker-256 transplanted hepatoma.

METHODS: Male Wistar rats were inoculated with Walker-256 tumor in the left lobe of liver. Angiography and transarterial chemoembolization were performed at d14 after transplantation. Sixty rats bearing walker-256 transplanted hepatoma were randomly divided into control group, arterial infusion group and TACE group. Each group consisted of twenty rats. Normal saline, 5-FU, 5-FU and lipiodol were infused through hepatic artery respectively. Two weeks after the infusion, staining of factor VIII, VEGF and b-FGF was performed by immunohistochemistry method in routine paraffin-embeded sections. Microvessel density (MVD) was counted in endothelial cells with positive factor VIII. Their expression levels were analyzed in conjunction with the pathologic features.

CONCLUSION: There has been little influence of lipiodol chemoembolization on the formation of tumor angiogenesis, but the development of neovascularization and expression of VEGF play important roles in establishment of collateral circulation and reconstruction of blood supply of residual cancer tissue.

Transarterial chemoembolization (TACE) has been widely practiced in the treatment of unresectable hepatocellular carcinoma (HCC)[1-5], but long-term TACE therapy was as yet unsatisfactory[6-8]. Histopathologic examination showed although TACE could induce significant necrosis, yet complete tumor necrosis was rare, the residual tumor cells remained viable in the peripheral region, which may play an important role in local recurrence or as a source of metastasis affecting the long-term efficacy of TACE[9-11].

Tissue in hypoxic environment is common in both experimental and human solid tumor[12]. Hypoxia cells have reduced metabolic rate, reduced transcription and translation, even cell cycle arrest. Hypoxia can inhibit cell division or even lead to cell death[13]. But body compensatory reaction can also lead to a wide range of responses including angiogenesis, anti-apoptosis gene expression and changes in metabolic rate at both systemic and cellular levels[14,15]. After TACE, the tumor cells are under extremely hypoxic or even anoxic environment. It is possible that some adaptive responses to hypoxia will help these cells survive, but to our knowledge, studies regarding these are very few.

Walker-256 transplanted hepatoma is a useful model for the study of cancer therapy[20,23,24]. In hepatic arteriography, the tumor is usually hypervascular and receives its blood supply almost exclusively from hepatic artery just as that seen in human HCC[23]. Our study was designed to observe the influence of TACE on the *expression of angiogenesis, VEGF and b-FGF and to assess their relevance to Walker-256 transplanted hepatoma.

MATERIALS AND METHODS
Walker-256 tumor inoculation into the rat livers

Fourteen days after transplantion, a second laparotomy was performed. A 0.6 mm polyethylene catheter was inserted into the gastroduodenal artery and fixed by a suture. The common hepatic artery and right hepatic artery were temporarily ligated during injection of the drugs. In this study, sixty rats were randomly divided into three groups, twenty rats each group (Table 1).

Fourteen days after TACE, hepatoma specimens were obtained and fixed in 10% formalin for 12 h, then embedded in paraffin according to routine procedures. The histological sections were stained with hematoxylin-eosin (HE) for observation under light microscopy and measurement of the extent of tumor necrosis.

Immunohistochemistry was performed in sections from a selected block of each specimen. 5-μm thick sections mounted on 3-aminopropyltrietoxysilane-coated slides were dewaxed in xylene and rehydrated at graded concentrations of alcohol. Endogenous peroxide was blocked with 0.6% H2O2 for 20 min. Then the sections were pretreated in a microwave oven in citrate buffer for 15 min at 95 °C. Thereafter, the slides were processed according to the standard methods with ABC kit. The primary antibody used was polyclonal antibody of von-Willebrand factor at dilution of 1:100, polyclonal antibodies to VEGF and b-FGF at dilution of 1:50. All these antibodies were from Santa Cruz Biotechnology; Santa Cruz, Calif USA. Diaminobenzine was used for the coloration development. Negative controls were generated by substituting the primary antibody with distilled water.

The tumors were frequently inhomogeneous in their microvessel density. For determination of MVD, the five most vascular areas within a section were chosen and counted under a light microscope with a 200-fold magnification as described by Weidner[25]. A brownstain structure clearly separated from the adjacent microvessels was regarded as a single countable microvessel. The average count was recorded as MVD for each case.

Determination of VEGF and b-FGF expression

The counting of VEGF and b-FGF immunoreactive cells was made by scanning and scoring of five high-power fields using 400 magnification. Positive VEGF and b-FGF were recognized as intensely stained in tumor cell cytoplasm.

The expression of VEGF was semi-quantitatively evaluated as follows. Those having positive staining less than 5% were regarded as -, between 5% and 15% as +, between 15% and 50% as 2+, and greater than 50% as 3+. The b-FGF immunostaining was evaluated by a qualitative method as follows. Positive staining less than 10% was regarded as negative, greater than 10% as positive.

Hematoxylin-eosin (H&E) stained sections of the liver specimens showed poorly-differentiated carcinomas, which were apparently spherical or ovoid in shape. The tumor cells were arranged irregularly with hyperchromatosis, polymorphism and numerous mitoses. The mass was sharply demarcated from the surrounding normal parenchyma, its capsule was thin and composed of collagen fibers caused by tumor compression. The tumor showed inhomogeneous hypervascularization consisting mainly of small arteries and capillaries. Satellite nodules or portal vein tumor thrombus could be seen in some rats.

In TACE group, examination of the sections showed extensive central necrosis of the tumor in all cases. The central necrosis enlarged to moderate (16/20) or severe degree (4/20). Intra-tumoral hemorrhage or bile stases were seen in some, but the tumor cells tended to remain viable at the periphery of the nodules 2 wk after embolization therapy. We also found thick fibrous capsules with chronic inflammatory and cells infiltration. Various degrees of degeneration and necrosis were seen in normal hepatic parenchyma adjacent to the tumor. In the control and AI groups, the interior of the tumor had many viable tumor cells with spotty and scattered necrosis, the capsules were thin and composed of collagen fibers. Tumor volume and tumor growth rate before and after therapy are listed in Table 2.

The von Willebrand Factor (Factor-VIII) antibody gave an intense staining of the vascular endothelial cells (Figure 1). A substantial inhomogeneity in microvessel counts was found in different areas in the same section. In TACE group, the positive factor VIII cells were found focusing in the newly formed tumor. The MVD of each group is shown in Table 3. 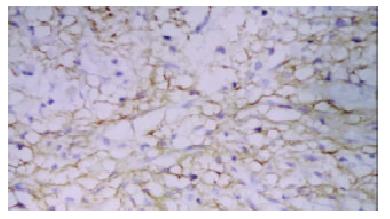 Immunohistochemical staining of VEGF showed strong immunoreactivity in tumor cells and vascular endothelial cells within the tumor tissues (Figure 2). In contrast, non-neoplastic hepatocytes showed weak staining. The staining of VEGF was inhomogeneous. In the sections after TACE, at the tumor nests, boundary of necrotic and non-necrotic area and pericapsular area, VEGF positive tumor cells were relatively easy seen. The expression of VEGF in each group is shown in Table 3. 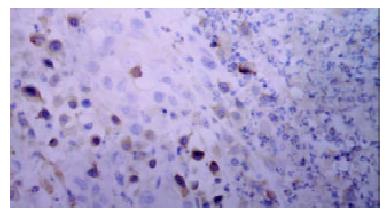 b-FGF protein expression and its correlation with MVD

Angiogenesis is an inherent property of tumor. It is important in its development and progression. Among many solid tumors, the degree of tumor angiogenesis was closely related to its biological behaviors, which reflect its ability for infiltration, recurrence and metastasis[26-30]. Intratumoral microvessel density (MVD) is commonly used to assess angiogenic activity. Defining and measuring MVD in the residual tumor cells after TACE might help judge the blood supply of residual tumor tissue and prognosticate the activity of these cells to a certain extent indirectly[31].

TACE could hardly abolish tumor blood supply. The possible causes included: incomplete embolization or partial recanalization of the artery, presence of intrahepatic porto-arterial shunt, formation of collateral circulation, and opening of potential communicating vessels[9,32,33]. The present study suggested that neovascularization and expression of VEGF might be another important factor. At the newly formed tumor nests, abundant factor VIII and positive VEGF cells could be found, and slight necrosis was seen in regions that had abundant neovasculature. These suggest that neovascularization plays an important role in the formation of collateral circulation, and relatively abundant blood supply will help tumor cells escape from the damage by TACE and increase the opportunity of survival.

Some authors considered that TACE might increase the chance of tumor recurrence or metastasis[20,34,35], which might be related to hypoxia caused by TACE and increased level of angiogenesis due to hypoxia[36-38]. The present study showed that MVD of TACE group was slightly higher than that of the control group and AI group, but no statistical difference was found, suggesting that TACE would not increase the level of tumor angiogenesis. Although the exact mechanism is currently unclear, we consider the possible explanation would be that the tumor cells were in an extreme hypoxia or even anoxia environment for a longer duration after TACE, which resulted in extensive necrosis and apoptosis of timorous and endothelial cells and decrease of secretion of angiogenic factor and weakening of the paracrine effect.

The intratumoral distribution of tumor neovasculature was inhomogeneous after embolization therapy. The newly formed blood vessels were less in the center of tumor but much more in the periphery and subcapsular area. This phenomenon might be related to the characteristics of tumor blood supply. Although blood supply of the tumor mainly came from hepatic artery, the peripheral area also received portal blood. There were potential collateral circulations both between the artery-portal veins and between the lobular arteries. After TACE, the portal blood supply increased with opening of collateral circulation, the blood supply of the peripheral region of the tumor restored more easily.

A balance between angiogenic and angiostatic factors regulates the angiogenesis. These factors may be produced either by tumor cells or host cells. The most commonly studied angiogenic factors were VEGF and b-FGF. VEGF could stimulate endothelia cells to proliferate, migrate, and alter their patterns of gene expression, increase microvascular hyperpermeability, extravasate plasma proteins into extravascular space and induce plasma-derived matrix[39,40]. VEGF played a key role in tumoral angiogenesis, it could induce neovascularization and was considered to be crucial in tumor biology[41,42]. b-FGF had synergistic effects with VEGF[43].

In the present study, the expression of VEGF was slightly higher in TACE group than in the control and AI groups, but no statistical difference was found. There was a significant correlation between MVD and VEGF expression. MVD counts in positive VEGF group were much higher than in negative VEGF group. At the newly formed tumor nests, the boundary of necrotic and non-necrotic area and the subcapsular area, positive VEGF tumor cells were more abundant and this was consistent with the distribution of neovasculature. Taken together, the results in the current study strongly suggested that VEGF played a key role in the formation of tumor neovasculature after TACE.

In conclusion, the influence of lipiodol chemoembolization on formation of tumor angiogenesis is relatively limited, but the development of neovascularization and expression of VEGF play important roles in establishing collateral circulation and reconstructing blood supply of residual cancer tissue.

Edited by Wu XN and WangXL