AIM: To observe the kinetics of D (-)-lactate alteration in both portal and systemic circulation systems, and its relationship with intestinal injury in rats subjected to acute intestinal ischemia-reperfusion.

Major trauma and shock may initiate a cascade of events leading to sepsis with subsequent multiple organ failure. Gut mucosal barrier dysfunction is assumed to play an important role in causing the septic process[1]. From our and other studies, it has been suggested that enteric organisms and/or their toxins might translocate across the intestinal mucosa, entering the systemic circulation via the lymphatic or portal systems and resulting in the development of remote organ damage in animals and patients with shock following hemorrhage, trauma, or burns[1-3].

The intestine is one of the most sensitive tissues to ischemia-reperfusion injury. Reperfusion of the intestine is often associated with increased mucosal permeability and ulceration. Mucosal injury has been assessed either morphologically or by measuring the permeability of the mucosal barrier to small or large solutes; however, there exists no reliable serum marker for the early diagnosis of acute intestinal insult in clinical practice.

D (-)-lactate is produced by indigenous bacteria found in the gastrointestinal tract, and mammals do not possess the enzyme systems to rapidly metabolize it[4]. Therefore, an increase in D (-)-lactate might reflect an efflux of bacteria and/or their products into circulation as a result of mucosal injury. Recently, a report was published showing that serum D (-)-lactate was increased in animal models of acute intestinal ischemia and simple obstruction[5]; yet, it remains unclear whether this process is associated with a significant dysfunction in mucosal barrier following reperfusion.

The present study was designed to determine the kinetics of plasma D (-)-lactate changes, and to examine whether D (-)-lactate levels are correlated to intestinal damage in rats caused by acute intestinal ischemia-reperfusion injury.

Adult male Sprague-Dawley rats purchased from Charles River Wiga GmbH (Sulzfeld, Germany) were used in this study. Following anesthesia (ketamine/xylazine: 112/15 mg/kg), the right femoral artery was cannulated under aseptic conditions using a polyethylene catheter connected to a blood pressure monitor. After a midline laparotomy was performed, the superior mesenteric artery (SMA) was isolated from the surrounding connective tissues near its aortic origin. The SMA was then occluded with an atraumatic clip applied to the root of the mesentery. After 75 min of ischemia, the arterial clip was removed, allowing reperfusion. Reperfusion was confirmed by the return of pulsations to the mesenteric vascular arcade[6]. The laparotomy incision was closed, and anesthetized animals were monitored during an additional 6 h of reperfusion.

Six to nine animals were sacrificed at each of following time points: before occlusion, at end of ischemia, and at 0.5 h, 2 h and 6 h after release of the clamp. Portal blood samples were obtained by portal vein puncture before the animals were sacrificed at each time point, and the collection was limited to once per animal to avoid potential contamination. Plasma was separated by centrifugation and stored at -30 °C until analysis.

Plasma D (-)-lactate levels were measured by an enzymatic spectrophotometric assay with slight modification using a centrifugal analyzer (Cobas-Fara)[7]. For analysis, the supernatant plasma without deproteinization was added to tubes and mixed with carbonate buffer containing 4.6 mmol/L of NAD+. The reaction was initiated by adding 50 μL of D-lactic dehydrogenase (D-LDH; Sigma Chemical Co., St. Louis, MO, United States) to each tube and the absorbance change at 340 nm was measured against the reagent blank tubes with 50 μL water instead of D-LDH. Serial concentrations of D-lactate (D-lactic acid; Sigma Chemical Co.), from 3.125 to 50 mg/L, were analyzed in order to prepare the standard curve.

The endotoxin content of plasma samples was assayed by the Limulus amebocyte lysate test with a kinetic modification of the test kit procedure[2]. The method has a detection limit of 0.75 ng/L in 1≥10 plasma dilution.

In a blind manner, a postmortem examination was performed together with a macropathological evaluation based on a pre-established four-grade scoring system[8]. For histological examination, tissue samples from small intestine were taken and fixed in 10% buffered formalin for analysis as light microscopic sections stained with hematoxylin-eosin.

Figure 1 Kinetics of plasma D (-)-lactate alteration in portal and systemic circulation systems. Six to nine animals were assessed for each time point. Data are expressed as x ± sx-. aP < 0.05 and bP < 0.01 vs baseline values.

The animals were found to have no abnormal changes in bowel functions before the induction of intestinal ischemia. SMA occlusion for 75 min caused marked intestinal damage, which was much worse upon reperfusion. The macropathological evaluation scores were 2.0 ± 0.2, 2.2 ± 0.2 and 2.7 ± 0.1 at 0.5, 2, and 6 h after reperfusion. The macropathological evaluation scores of intestine were significantly correlated to portal D (-)-lactate levels in animals at various time points (r = 0.415, P < 0.01; Figure 2). 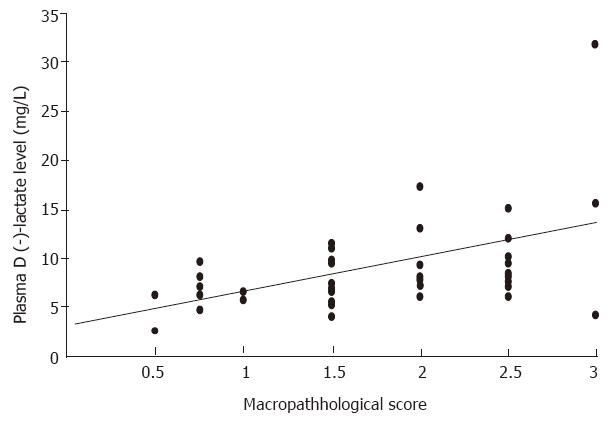 Figure 2 Correlation between the macropathological evaluation scores of intestine and the portal D (-)-lactate levels in animals subjected to intestinal ischemia-reperfusion injury.

The endotoxin concentration within portal vein rose remarkably in the control animals, being 9.5-fold over the baseline values at the end of 75-min ischemia (P < 0.05). It reached a maximum at 2 h after clamp release, and decreased gradually up to the end of the observation period (Figure 3).

In the present experiment, we observed that ischemia-reperfusion of the small bowel resulted in a significant elevation in D (-)-lactate levels in both portal and systemic blood. This was potentially associated with failure of the intestinal mucosal barrier leading to the subsequent escape of indigenous endotoxin/bacteria to the circulation systems. Our data also suggested that an early and sustained rise in systemic D (-)-lactate might occur during mesenteric ischemia, even without further reperfusion injury[5].

The normal gut epithelium provides an anatomical and physiological barrier to the toxic intestinal contents. Conditions which lead to mesenteric hypoperfusion, such as those seen in hemorrhage and other shock states, have been shown to cause breakdown of the intestinal mucosal barrier[1-3,9]. In this study, the status of the mucosal barrier was assessed quantitatively using a plasma marker, namely D (-)-lactate. D (-)-lactate is strictly a product of bacterial fermentation, and it is known to be produced by many species of bacteria found in the gut flora[4,5], while mammalian tissue does not produce D-lactic acid, which may not or only slowly be metabolized. D-lactic acid accumulating in the blood can generally be considered as a result of active bacterial metabolism due to systemic infections or some gastrointestinal disorders. In fact, D-lactate acidosis has been described in humans with short bowel syndrome, as well as bacterial infections[10]. More recently, in a clinical study, Murray et al[11]demonstrated that patients found to have mesenteric ischemia at laparotomy had significantly elevated D (-)-lactate levels in peripheral blood as compared with the patients with other acute or normal abdominal conditions. Thus, circulating D (-)-lactate could aid in diagnosing acute mesenteric ischemia[5]. From the current experiment, it is clearly revealed that marked elevation in plasma D (-)-lactate occurred during the occlusive episode, which had a tendency to further increase after release of the clamp and was correlated with a progressive disintegration in the histology of the small bowel in response to reperfusion injury. Therefore, plasma D (-)-lactate appears to be a useful marker reflecting gut barrier damage in the setting of acute ischemia-reperfusion insult.

The mechanisms by which intestinal ischemia-reperfusion leads to a sustained elevation in plasma D (-)-lactate are not entirely understood from this experiment; although, it is possible that acute intestinal insult might cause substantial mucosal injury and increase permeability, thereby inducing an efflux of bacteria and their metabolic products into the portal circulation. In this study, the pathological examination showed marked intestinal lesions during ischemia, which became worse upon reperfusion. Another possible explanation would be that an increased gut permeability might attribute to release of inflammatory mediators, particularly tumor necrosis factor, which is considered to be induced by gut-derived endotoxin/bacteria, as well as hypoxia. These mediators may directly damage the mucosal barrier function[6]. In addition, it has been reported that ischemia-reperfusion injury to the intestine is associated with overgrowth of the residing microbial flora, and normally low plasma D (-)-lactate levels could be elevated markedly as a result of increased release of D-lactate by bacterial proliferation concomitant to increased mucosal permeability. Our previous observation that the overgrowth of Gram-negative bacteria in the intestinal tract was associated with an increase in intraluminal bacterial products, such as endotoxin following hemorrhage and resuscitation[3], gives further support to this opinion. Finally, since D-lactate is not metabolized in the liver; persistent elevation of D-lactate level in both portal and systemic circulation systems following intestinal ischemia-reperfusion injury resulted in similar D (-)-lactate concentration in the peripheral and portal vein throughout the observation period. Therefore, our data might be of potential importance, serving as the experimental basis for the favorable clinical use of D (-)-lactate in the diagnosis of acute intestinal disorders related to ischemia-reperfusion injury.

In summary, these data suggest that acute intestinal ischemia is associated with failure of the mucosal barrier resulting in increased plasma D (-)-lactate levels in both portal and systemic blood, and it is also remarkably enhanced by the subsequent reperfusion. Plasma D (-)-lactate may be a useful marker of intestinal injury following both ischemia and reperfusion insult.

The authors express their gratitude to all colleagues who have been of considerable help in the realization of this study, in particular to Dr. Zhou Bao-Tong, Dr. S Bahrami, and Dr. G Schlag.