Hyperplastic polyps are considered non-neoplastic, whereas sessile serrated lesions (SSLs) are precursors of cancer via the ‘‘serrated neoplastic pathway’’. The clinical features of SSLs are tumor size (> 5 mm), location in the proximal colon, coverage with abundant mucus called the ‘‘mucus cap’’, indistinct borders, and a cloud-like surface. The features in magnifying narrow-band imaging are varicose microvascular vessels and expanded crypt openings. However, accurate diagnosis is often difficult.

To develop a diagnostic score system for SSLs.

We retrospectively reviewed consecutive patients who underwent endoscopic resection during colonoscopy at the Toyoshima endoscopy clinic. We collected data on serrated polyps diagnosed by endoscopic or pathological examination. The significant factors for the diagnosis of SSLs were assessed using logistic regression analysis. Each item that was significant in multivariate analysis was assigned 1 point, with the sum of these points defined as the endoscopic SSL diagnosis score. The optimal cut-off value of the endoscopic SSL diagnosis score was determined by receiver-operating characteristic curve analysis.

Among 1288 polyps that were endoscopically removed, we analyzed 232 diagnosed as serrated polyps by endoscopic or pathological examination. In the univariate analysis, the location (proximal colon), size (> 5 mm), mucus cap, indistinct borders, cloud-like surface, and varicose microvascular vessels were significantly associated with the diagnosis of SSLs. In the multivariate analysis, size (> 5 mm; P = 0.033), mucus cap (P = 0.005), and indistinct borders (P = 0.033) were independently associated with the diagnosis of SSLs. Size > 5 mm, mucus cap, and indistinct borders were assigned 1 point each and the sum of these points was defined as the endoscopic SSL diagnosis score. The receiver-operating characteristic curve analysis showed an optimal cut-off score of 3, which predicted pathological SSLs with 75% sensitivity, 80% specificity, and 78.4% accuracy. The pathological SSL rate for an endoscopic SSL diagnosis score of 3 was significantly higher than that for an endoscopic SSL diagnosis score of 0, 1, or 2 (P < 0.001).

Size > 5 mm, mucus cap, and indistinct borders were significant endoscopic features for the diagnosis of SSLs. Serrated polyps with these three features should be removed during colonoscopy.

Recent molecular biology studies have supported the classification of colorectal serrated lesions into hyperplastic polyps (HPs), sessile serrated lesions (SSLs), and traditional serrated adenomas (TSAs)[1]. HPs are considered non-neoplastic, whereas SSLs and TSAs are both precursors of cancer via the “serrated neoplastic pathway”, which is responsible for up to 20% of all sporadic colorectal cancers[2]. The features of serrated neoplastic pathways include high microsatellite instability and the potential for rapid conversion to malignancy[3,4]. This implies that all SSLs should be accurately diagnosed and endoscopically removed[5], whereas HPs do not need to be removed. Therefore, it is essential to differentiate SSLs from HPs.

SSLs typically occur in the proximal colon[6]. Endoscopically, SSLs usually measure > 5 mm, are frequently covered by mucus called ‘‘mucus cap’’, and have indistinct borders and a cloud-like surface[7]. The features of SSLs under magnifying narrow-band imaging (NBI) are varicose microvascular vessels and expanded crypt openings[8]. The feature of SSLs on chromoendoscopy is a type II open-shape pit pattern. In contrast, HPs commonly occur in the distal colon or rectum and are often ≤ 5 mm in size. However, differential diagnoses are often difficult[9]. We hypothesized that well-designed combination of endoscopic features might be useful for the diagnosis of SSLs. Therefore, the present study aimed to develop a diagnostic score system for SSLs.

This retrospective study was approved by the Ethical Review Committee of the Hattori Clinic on September 4, 2020 (approval No. S2009-U04). Written informed consent was obtained from all participants. All clinical investigations were conducted according to the ethical guidelines of the Declaration of Helsinki.

We retrospectively reviewed consecutive patients who underwent polypectomy or endoscopic mucosal resection during colonoscopy between July and September 2019 and between January and March 2020 at the Toyoshima Endoscopy Clinic. Colonoscopy was performed to evaluate symptoms such as hematochezia, rectal bleeding, abdominal symptoms, abnormal bowel habits, anemia, or positive fecal immunochemical test findings or for colorectal polyp surveillance. We used an electronic endoscopy reporting system (T-File System; STS Medic, Japan) that was integrated into the clinic’s patient record systems.

The colonoscopies were performed using an Elite CF290 endoscopy system (CV-290 and CLV-290, Olympus, Japan) with a 290 series colonoscope (CF-HQ290Z, CF-HQ290, or PCF-H290Z, Olympus, Japan) or a 260 series colonoscope (PCF-PQ260)[10]. The patients underwent colonoscopies while under conscious sedation with midazolam and/or pethidine hydrochloride. Pancolonic chromoendoscopy was performed by spraying 0.05% indigo carmine[10,11]. All polyps detected by white light imaging during colonoscopy were washed with water, and also assessed by NBI with and without magnification. The colonoscopies were performed by three expert endoscopists (Nishizawa T, Sakaguchi Y, and Toyoshima O).

Endoscopic diagnosis was performed based on the Workgroup on Serrated Polyps and Polyposis classification[12]. We removed lesions diagnosed as adenomas or clinically significant serrated polyps. A clinically significant serrated polyps was defined as any SSL, TSA, or HP measuring ≥ 1 cm anywhere in the colon or HP measuring ≥ 5 mm located proximal to the sigmoid colon[13-15]. We included polyps measuring 15 mm or more in diameter.

The location, size, morphology, and endoscopic diagnosis for each detected polyp were recorded. The location of the polyps was specified as the cecum; ascending, transverse, descending, or sigmoid colon; or rectum. The distal side from the splenic flexure was defined as the distal colon, while the proximal side to the splenic flexure was defined as the proximal colon. The polyp size was estimated by comparison with a closed snare or forceps. The morphology and presence of a mucus cap, indistinct borders, cloud-like surface, varicose microvascular vessels, and expanded crypt opening were also recorded. The mucus cap was defined as coverage with abundant mucus (Figure 1A). Indistinct borders were defined as vague demarcations of the lesion border (Figure 1B). A cloud-like surface appeared granular, nodular, or bumpy and like the surface of a cumulus cloud. Varicose microvascular vessels were defined as vessels thicker than meshed capillary vessels that meandered similar to varicose veins. Expanded crypt opening was defined as the heterogeneous expansion of nearby crypts.

Figure 1 Endoscopic findings regarding sessile serrated lesions. A: ‘‘Mucus cap’’ was defined as coverage with abundant mucus; and B: Indistinct borders were defined as vague demarcations of the lesion border.

The pathological ﬁndings were evaluated by hematoxylin and eosin staining and histological diagnoses were made by an expert gastrointestinal pathologist (H. W.). Serrated lesions were classified as HP, SSL, and TSA according to the World Health Organization classification[16,17]. We collected data on polyps with endoscopic or pathological diagnosis of serrated polyps.

A total of 629 patients underwent colonoscopies with polypectomy or endoscopic mucosal resection. Among 1288 polyps removed from these patients, we identified 232 polyps as endoscopically or pathologically diagnosed serrated polyps. A study flowchart of the included polyps was presented in Figure 2. 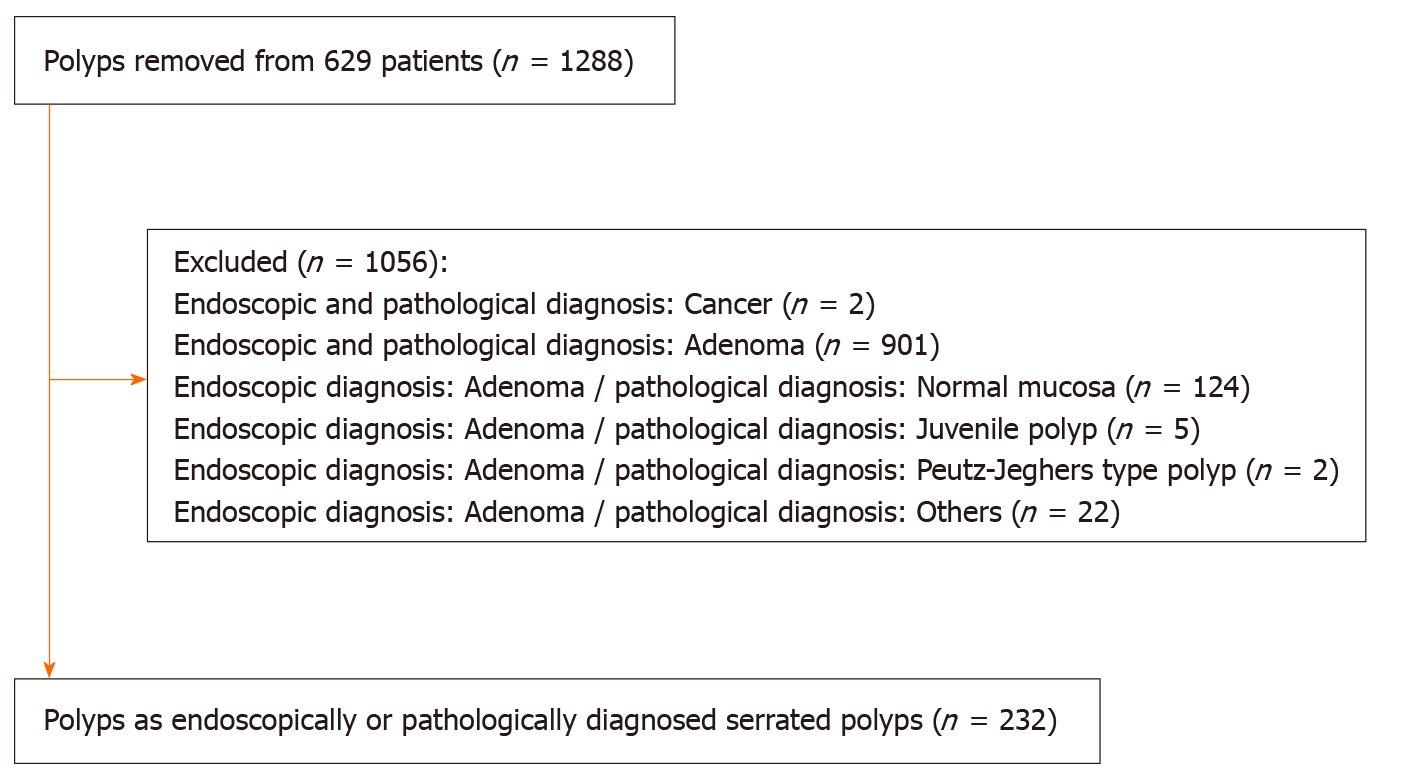 The characteristics of the polyps are shown in Table 1. The pathological diagnoses included 72 SSLs, 130 HPs, 1 TSA, 7 adenomas, 20 normal mucosa, and 2 others.

Table 2 shows the results of the univariate and multivariate analyses for the diagnosis of SSL. In the univariate analyses, the location (proximal colon), size > 5 mm, mucus cap, indistinct borders, cloud-like surface, and varicose microvascular vessels were significantly associated with the diagnosis of SSL. On the other hand, expanded crypts opening was not significant in the univariate analysis. In the multivariate analysis, size > 5 mm (P = 0.033), mucus cap (P = 0.005), and indistinct borders (P = 0.033) were independently associated with the diagnosis of SSL. Size > 5 mm, mucus cap, and indistinct borders were each assigned 1 point and the sum of the points was defined as the endoscopic SSL diagnosis score. The minimum and maximum endoscopic SSL diagnosis scores were 0 and 3, respectively. In the ROC curve analysis, the area under the curve was 0.806 and the optimal endoscopic SSL diagnosis score cut-off was 3 (Figure 3A), which corresponded to 75% sensitivity, 80% specificity, and 78.4% accuracy for the prediction of pathological SSL. The ROC curves of the three predictors (size, mucus cap, and indistinct borders) were presented in Figure 3B-D, respectively. 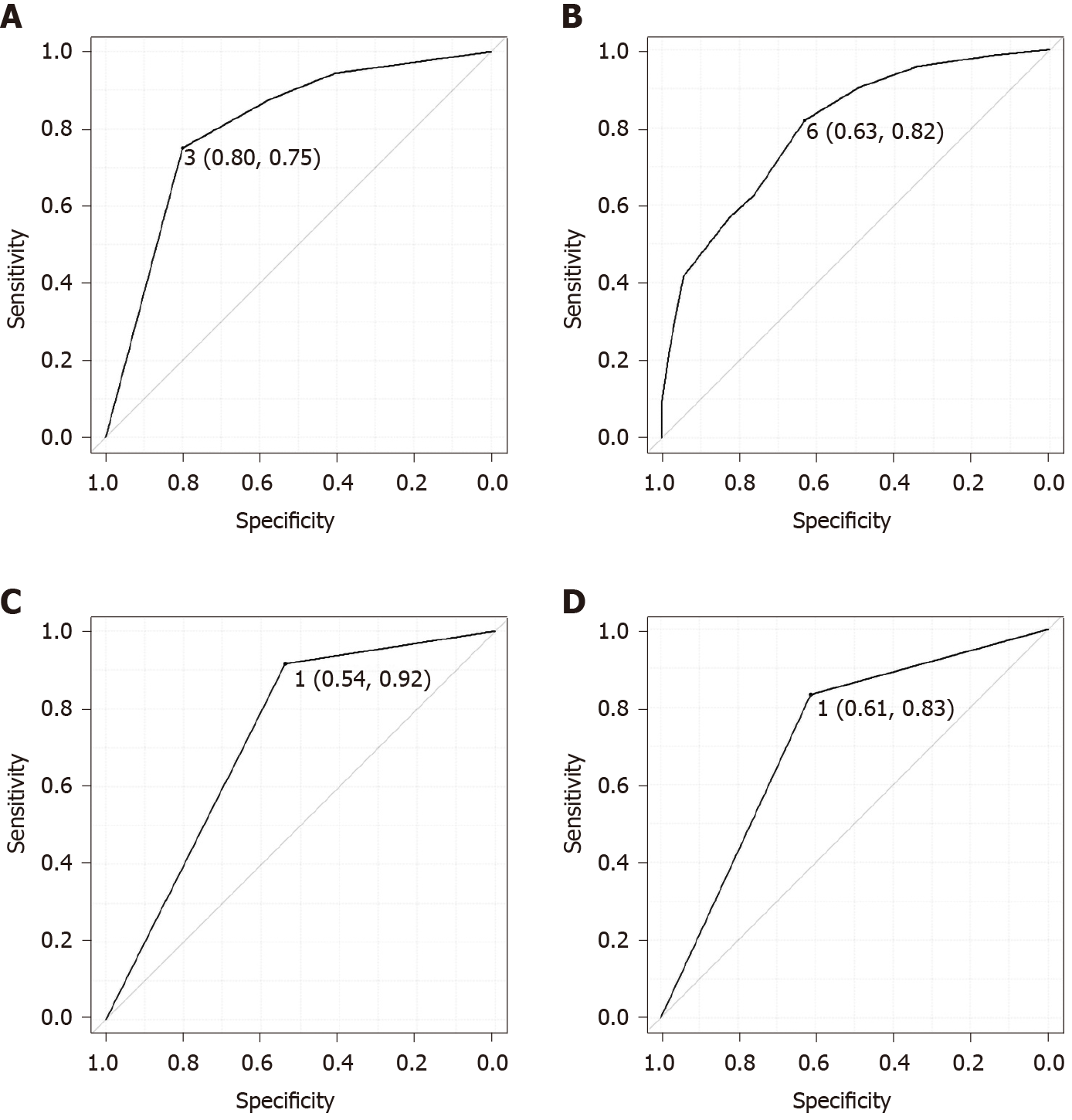 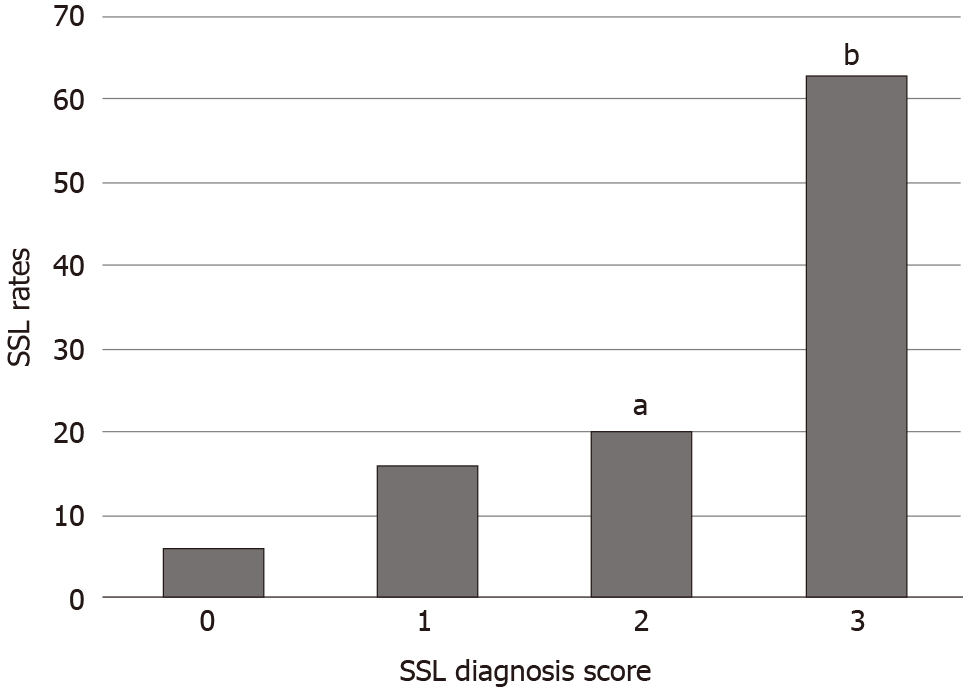 We found that size > 5 mm, mucus cap, and indistinct borders were independent predictors for SSLs. The combination of these three features in serrated polyps allowed the diagnosis of SSLs with 75% sensitivity, 80% specificity, and 78.4% accuracy.

Various studies have sought to clarify the features of SSLs. Hasegawa et al[18] investigated 107 SSLs to discriminate them from other serrated lesions, reporting that the mean lesion size of SSLs was larger than that of HP (14.2 vs 6.2 mm; P < 0.01). Moreover, SSL was preferentially located in the proximal rather than the distal colon (81.8% vs 18.2%), whereas HP was located less often in the proximal colon than in the distal colon.

Murakami et al[7] summarized the features of SSLs in their review report, indicating that SSLs were > 5 mm, frequently covered by a mucus cap, and more commonly located in the proximal colon. The features also included small dark spots and varicose microvascular vessels on magnifying NBI and type II open pit patterns on magnifying chromoendoscopy. The small dark spots are nearly synonymous with expanded crypt openings and these are considered to correspond to type II open pit patterns. This phenomenon is likely due to mucin overproduction, which could also lead to the mucus cap[19].

The results of our univariate analysis showed that proximal colon, size > 5 mm, mucus cap, indistinct borders, cloud-like surface, and varicose microvascular vessels were significant factors for the diagnosis of SSLs. Multivariate analysis revealed that size > 5 mm, mucus cap, and indistinct borders were independent predictors for SSLs in our clinical setting.

The endoscopic SSL diagnosis score consists of size (> 5 mm), mucus cap, and indistinct borders. The area under the curve in this study was 0.806. The optimal cut-off point was 3, which resulted in 75% sensitivity and 80% specificity. Our score is simple and does not require magnifying NBI. Thus, it may be useful in busy clinical settings or examinations with a scope without a magnifying function.

The present study has several limitations. First, this retrospective study was conducted at a single institution; however, the recording of medical data was well controlled. Second, our study did not perform magnifying chromoendoscopy. A follow-up study is needed to verify the validity of the endoscopic SSL diagnosis score.

In conclusion, size (> 5 mm), mucus cap, and indistinct borders were significant endoscopic features for the diagnosis of SSLs. Serrated polyps with these three features should be removed during colonoscopy.

The serrated neoplastic pathway is responsible for up to 20% of all sporadic colorectal cancers. Sessile serrated lesions (SSLs) should be accurately diagnosed and endoscopically removed.

Various findings have been proposed as features of SSLs. However, accurate diagnosis is often difficult.

This study developed a scoring system to predict the diagnosis of SSLs.

We retrospectively reviewed patients who underwent endoscopic resection at the Toyoshima Endoscopy Clinic. We collected data on 232 polyps that were endoscopically or pathologically diagnosed as serrated polyps. The significant factors for the diagnosis of SSLs were assessed using logistic regression analysis.

Size (> 5 mm), mucus cap, and indistinct borders were significant endoscopic features for the diagnosis of SSL. Serrated polyps with these three features should be removed during colonoscopy.

A follow-up study is needed to verify the validity of the endoscopic SSL diagnosis score.