Core tip: The efficacies of 7-d levofloxacin or moxifloxacin, -containing regimens are becoming less effective in recent years due to the increasing antibiotic resistance, which necessitates 10-d or 14-d regimens or bismuth containing regimen are needed to achieve sufficient eradication rates. gyrA mutation is the most sensitive marker for predicting successful eradication in using quinolone-containing therapies. Thus, analysis of gyrA mutation before treatments is recommended. Seven-day sitafloxacin-amoxicillin-vonoprazan triple therapy is the best choice for third-line treatment at present.

Helicobacter pylori (H. pylori) is closely related to gastric cancer, gastric ulcer, atrophic gastritis, mucosa-associated lymphoid tissue lymphoma, and H. pylori-associated dyspepsia. Thus, eradication of H. pylori is useful for treatment and prevention of these diseases[1-6]. In recent years, eradication of H. pylori has become difficult due to an increase in antibiotic resistance, thereafter selection of an efficient regimen has become increasingly important[1,7].

Vonoprazan, a novel potassium-competitive acid blocker which has a strong acid secretion inhibitory effect, has been available since 2015. The high efficacy of vonoprazan as first- and second-line H. pylori eradication therapy treatment has already been shown[10,11]. Thus, vonoprazan is expected to play a role in quinolone-containing rescue therapies.

In this article, we describe the current status of quinolone-containing rescue therapies.

STATUS OF QUINOLONE-CONTAINING RESCUE THERAPIES IN THE WORLD’S GUIDELINES

IMPORTANT ROLE OF GYRA MUTATION FOR RESISTANCE TO QUINOLONES

The most common mechanism of high-level fluoroquinolone resistance is due to mutation in one or more of the genes that encode the primary and secondary targets of these drugs, the type II topoisomerases (gyrA, gyrB, parC and parE)[17].

gyrB is unlikely to mutate and is thought to have little resistance[21,22], but some reports have reported resistance due to gyrB[23,24]. Since neither parC nor parE is found in the complete gene sequences of H. pylori, it is thought to be not involved in resistance[25,26].

EPIDEMIOLOGY OF RESISTANCE TO QUINOLONES IN H. PYLORI

The prevalence of primary resistance of H. pylori to levofloxacin has been reported to range from 11.0% to 62.2% in different countries (Figure 1)[21,27-35]. There is no relationship between geographic factor and the resistance to levofloxacin. These data suggested that acquisition of resistance is related to high consumption rate of quinolones. Thus, the prevalence of resistance rates should be taken into consideration in selecting quinolone-containing treatments as a rescue therapy. 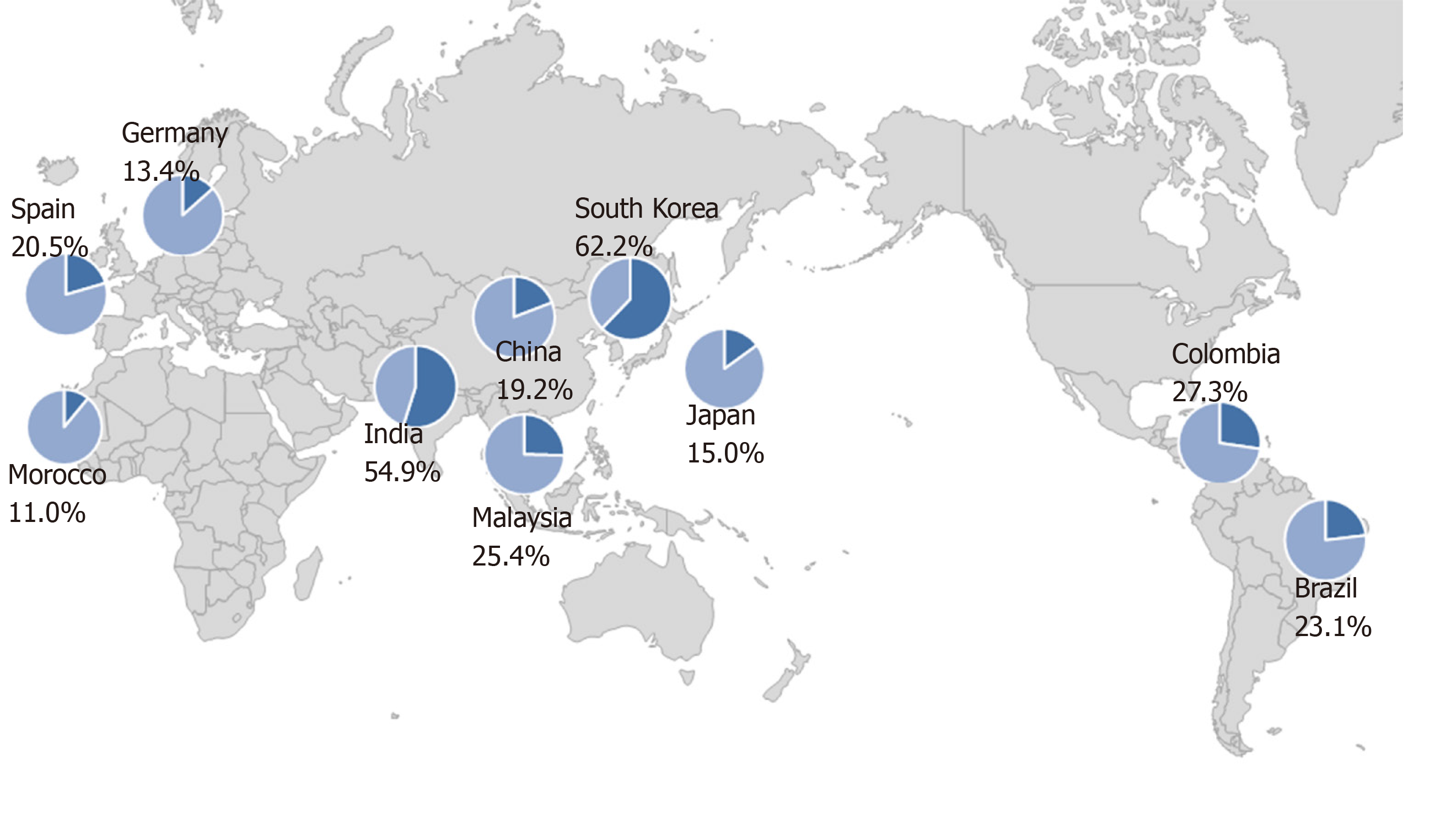 From these data, when levofloxacin-containing regimens are used as a rescue therapy, a drug sensitivity test or an analysis of gyrA mutation should be performed before treatment. In areas of high quinolones resistance, classical bismuth-containing quadruple therapy or fourth-generation fluoroquinolone, such as sitafloxacin, -containing regimen seems to be better choices. Modified sequential therapy containing levofloxacin or 10-d levofloxacin-tetracyclin-PPI-bismuth quadruple regimen could be an option as a third-line regimen.

Few reports are available on whether levofloxacin- or moxifloxacin-containing therapy is a better rescue therapy. As a first-line treatment, Rakici et al[82] performed randomized trial between levofloxacin-amoxicillin-lansoprazole triple therapy and moxifloxacin-amoxicillin-lansoprazole triple therapy, and there was no significant difference (92.0% vs 91.8%, respectively). The side effects observed in the two groups were similar.

In conclusion, levofloxacin- or moxifloxacin-containing therapies seem to be equally effective as second-line treatments; thus, either regimens can be used at present. In regions of high quinolones resistance, 14-d moxifloxacin-amoxicillin-PPI triple therapy is better choice than 7-d regimen. Few data are available on 10-d regimen, thus future research is needed to confirm its efficacy as a second-line therapy.

Regarding adverse events to sitafloxacin-containing regimens, severe side effects are rarely reported. Mild and transient adverse effects, such as diarrhea and soft stool, were reported by 24%-80% of patients who received treatments[68,86,87].

Wueppenhorst et al[88] showed that the levofloxacin/ciprofloxacin resistance occurred significantly more often in patients who had received quinolones-containing regimen when compared with patients who had not (44.5% vs 23.1%). We found that 20.8% of strains obtained double mutations in gyrA after eradication failure with stafloxacin-containing third-line treatment, which exhibited seven-fold increased MICs of sitafloxacin compared with pre-treatment. On the other hand, the MICs of sitafloxacin did not increase, when the location of the gyrA mutations did not change after treatment. Double mutations in gyrA also cause higher resistance to other fluoroquinolones[22]. If strains obtain new mutation in gyrA, quinolone-containing regimen will be less effective. Therefore, we recommend a more powerful regimen to be used, e.g., sitafloxacin-containing or extension of duration, and stronger inhibition of gastric acid secretion, when quinolone-containing regimen is used as a rescue treatment.