Spontaneous porto-systemic shunts (SPSS) are frequent in liver cirrhosis and their prevalence increases as liver function deteriorates, probably as a consequence of worsening portal hypertension, but without achieving an effective protection against cirrhosis' complications. Several types of SPSS have been described in the literature, each one associated with different clinical manifestations. In particular, recurrent or persistent hepatic encephalopathy is more frequent in patients with splenorenal shunt, while the presence of gastric varices and consequently the incidence of variceal bleeding is more common in gastrorenal shunt. In the advanced stage, the presence of large SPSS can lead to the so called “portosystemic shunt syndrome”, characterized by a progressive deterioration of hepatic function, hepatic encephalopathy and, sometimes, portal vein thrombosis. The detection of SPSS in patients with liver cirrhosis is recommended in order to prevent or treat recurrent hepatic encephalopathy or variceal bleeding.

Core tip: Liver cirrhosis is characterized by a progressive increase in portal hypertension and the consequent formation of porto-systemic shunts, that act as “release valves” to reduce the portal pressure, but also act as bypasses to normal liver flow. As the shunt becomes large enough, the complications appear including hepatic encephalopathy, variceal bleeding, portal vein thrombosis and the deterioration of liver function.

Portal hypertension is caused by an increase in resistance to portal outflow and by a growth in splanchnic blood flow[1,2]. Regional alterations in vasoreactivity (vasodilation and vasoconstriction), sinusoidal remodeling and capillarization, angiogenesis, venous thrombosis and vascular distortion, all play a certain role in the pathophysiology of portal hypertension and expansion of the collateral circulation. Patients with liver cirrhosis frequently develop a vast variety of spontaneous portal-systemic shunts (SPSS) as a complication of long-standing portal hypertension[3]. SPSS are communications between the portal vein and the systemic circulation than can open when portal pressure increases for the presence of liver cirrhosis[4]. These SPSS act as “release valves” to reduce the portal pressure, but also act as bypasses to normal liver flow. Frequently, SPSS represent an insufficient compensatory mechanism, not allowing for an adequate reduction of portal pressure, but decreasing hepatic portal-venous perfusion[3-5]. Numerous spontaneous portosystemic shunts have been described and named as shown in Table 1. SPSSs can be classified into left-sided and right-sided (central) shunts depending on their localization to the left or to the right of the spleno-porto-mesenteric confluence[5]. The most frequent right-side shunt is paraumbilical shunt (Figure 1), while the most common left-sided shunts are gastrorenal shunt and splenorenal shunt. The gastrorenal shunt occurs in 80%-85% of cirrhotic patients with gastric varices and it is a communication between left gastric vein and left renal vein (Figure 2)[6]. Less frequently, gastric varices could be sustained by a gastrorenal shunt. The splenorenal shunt consists in a direct communication between the splenic vein and the left renal vein (Figure 3) without passing through the submucosa of the gastrointestinal tract; in fact, it is not associated to gastric varices nor to bleeding risk. Gastric variceal bleeding is the most frequent complication of gastrorenal shunt[5-7], while hepatic encephalopathy and portal vein thrombosis, are frequently associated to splenorenal shunt. Moreover, SPSSs could be classified in large or small size according to its maximum diameter, with a cut-off of 8 mm; this value was chosen since it was the smallest size of a symptomatic shunt embolized reported in the literature[8,9]. A recent multicenter retrospective study[8] shown that the prevalence of SPSS in patients with liver cirrhosis increases as liver function deteriorates. The search for SPSSs allows to identify patients with a higher risk of worse outcomes, that would benefit from a more intensive care[8]. Until now, computed tomography (CT) scan represents the gold standard to detect SPSSs because it allows to trace the origin, course and outlet of the shunt with a reconstruction in 3D. Also, nuclear magnetic resonance imaging (MRI) can also provide the same information when interpreted by expert radiologists. The ultrasound examination, on the other hand, is not very specific and sensitive for the detection of SPSSs. For this reason, all cirrhotic patients should undergo at least once a year to CT or MRI scan for a better identification of the shunts. 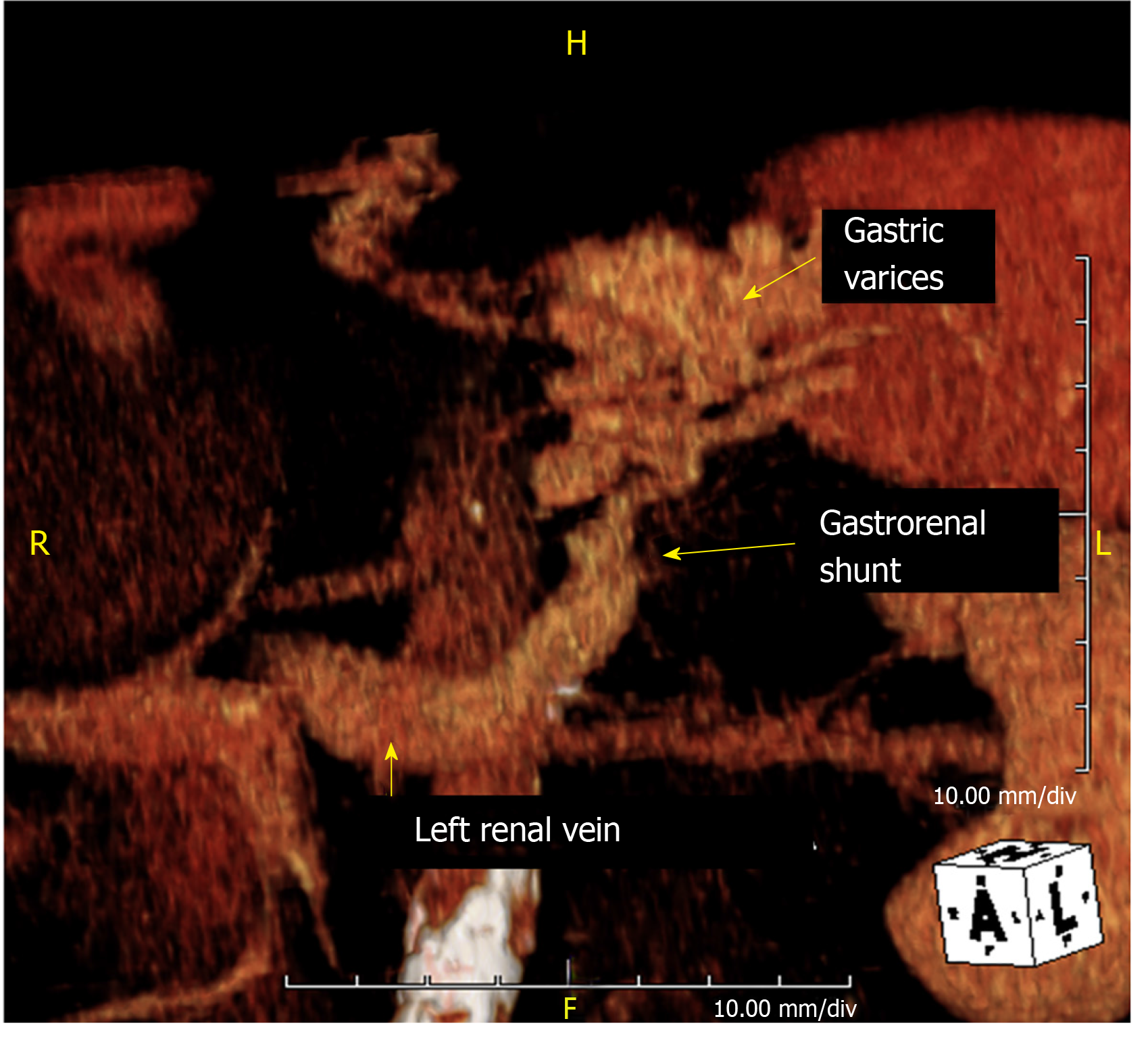 Another particular neurological alteration is the so called “cirrhosis-related Parkinsonism”, characterized by extrapyramidal and cerebellar symptoms at precise neurological examination[14]. Some patients develop a progressive hypokinetic-rigid syndrome with progressive ataxia, dystonia, choreoathetosis or spastic paraparesis with or without cognitive dysfunction. This chronic progressive form of HE is usually refractory to standard medical treatment and is frequently associated to the presence of SPSSs. Philips et al[15] demonstrated that in five of seven patients with hepatic Parkinsonism, the embolization of the shunt significantly improved neurological symptoms. A large shunt may cause HE even in the absence of liver cirrhosis; this type of encephalopathy is classified as type B HE[10-13].

The clinical importance of the shunts remains of great interest, as there is a discrepancy regarding the protective effect of SPSS from oesophageal variceal bleeding and the development of hepatic encephalopathy in cirrhotic patients[16-18]. Many cirrhotic patients continue to maintain an elevated portal pressure and suffer from EGV hemorrhage even in the presence of a SPSS. Compared to esophageal varices, gastric varices are more often found in patients with gastrorenal shunt, as already described[6,7]. With regards to the relation between SPSS and esophagogastric varices, the case-control study performed by Riggio et al[12] found that patients with chronic HE and large SPSS had less esophageal varices and portal-hypertensive gastropathy than patients without SPSS, suggesting that SPSS could have a protective role on gastrointestinal bleeding. Nevertheless, in former studies[5,16,17], presence of SPSS was not associated with lower risk of bleeding as compared to controls. Berzigotti et al[18] evaluated the relationship between SPSS detected by ultrasound and the presence of esophageal varices, concluding that the development of new SPSS was associated with a higher rate of varices formation and growth. In the study conducted by Simón-Talero et al[8], SPSS were associated with more gastroesophageal varices and GI bleeding only in patients with SPSS but preserved liver function (MELD 6-9 or Child-Pugh A), who showed higher HVPG values and more clinical significant portal hypertension (CSPH). In addition, the presence of SPSS in patients with CSPH was associated to higher rate of complications compared to patients without SPSS with CSPH. Thus, the finding of SPSS in patients with good liver function probably identifies a subgroup of patients with more advanced portal hypertension, who are more likely to develop complications and might have a worse prognosis. The main limitation of the MELD score is the lack of information about portal hypertension’s complications, thus a new score taking into account MELD and the presence of SPSSs could have a better prognostic value compared to MELD alone.

With the progression of portal hypertension, SPSS grow and shunt more portal blood into the systemic circulation. Very ‘‘large’’ portosystemic shunts (with or without varices) can take over the splanchnic (splenic and mesenteric) outflow and compete with the liver (hepatic sinusoids) as the natural outflow of the portal vein; in other words, the liver disease, portal hypertension and portosystemic shunt become an enclosed vicious cycle[19]. Once the cycle is complete, the portal vein becomes diminutive and flow within it becomes hepatofugal; the portal vein may even thrombose in the end-stage, resulting in the portosystemic shunt becoming the only outflow of the splanchnic (splenic and mesenteric) circulation. Portal vein diminution with or without thrombosis occurs with left-sided portosystemic shunts and not recannulated paraumbilical veins (right-sided or intrahepatic shunt). In splenic shunts (such as splenorenal and gastrorenal shunts), there is dilation of the splenic vein and diminution of the portal vein. Hypersplenism is also a feature of this syndrome composed of splenomegaly, thrombocytopenia, and in severe cases pancytopenia. As the shunting progresses, the liver atrophies, the portal vein thromboses, and both hepatic synthetic function and encephalopathy become debilitating and intractable[20].

The term “portosystemic shunt syndrome” (PSS) was coined by Kumamoto et al[21] to describe the gradual deterioration of hepatic function over five years in cirrhotic patients with SPSS. Subsequently, Saad et al[20] elaborated on this term further by describing a complete syndrome with specific clinical manifestations. In the Saad classification, three stages were described. In the early stage (A), the patient is asymptomatic with well-preserved hepatic function and large SPSS. In the late stage (B), the patient is symptomatic with recurrent/persistent HE and fairly-preserved hepatic function. The terminal/end stage (C) is characterized by hepatic failure and HE, ascites and jaundice. Thrombocytopenia is also frequently observed in patients with PSS.

The treatment of portosystemic shunt syndrome has become important and several interventional radiology procedures have become leading treatments for portal hypertension because of the extensive range of indications[15]. The main indications are: bleeding from gastric varices sustained by a gastrorenal shunt; recurrent HE due to the presence of a SPSS. With balloon-occluded retrograde transvenous obliteration (BRTO), a balloon catheter (with a diameter similar to the shunt’s size) is placed retrogradely in the gastrorenal shunt avoiding reflux into the inferior vena cava so that a sclerosant can be injected into the gastric varices for thrombus formation while the blood flow is cut off. Moreover, BRTO should be avoided when the contrast agent flows from the shunt into the portal vein under balloon-occluded retrograde venography, because there is a risk of portal thrombosis due to sclerosing agent migrated into the portal vein[15]. BRTO has been shown to be very effective in treating gastric varices and refractory HE associated with SPSS with low rebleeding rates (0%–9%)[22,23].

Different studies demonstrated that shunt-related hepatic encephalopathy due to the increased shunt blood flow can be dramatically improved by closing the shunts[15,26-29]. In some patients, with isolated oesophageal varices or type 1 gastro-oesophageal varices (GOV1), Transjugular Intrahepatic Porto-Systemic Shunt (TIPS) should be used to decompress the portal venous system, and avoids variceal bleeding. However, in presence of type 2 gastro-oesophageal varices (GOV2) or Isolated gastric varices (IGV), TIPS could not be efficient to reduce the bleeding risk and in these patients additional embolization of the shunt should be considered. Regarding gastric variceal bleeding, Gimm et al[28] demonstrated that BRTO provides better bleeding control, rebleeding-free survival and overall survival compared with transjugular intrahepatic porto-systemic shunt (TIPS).

Spontaneous portosystemic shunts have been associated with worse clinical outcomes in the pre liver transplantation (LT) setting, but little is known about the potential impact of SPSSs in post LT patients[30]. In a recent retrospective study[31], after comparing 326 patients without, small or large SPSSs, no statistical difference was found for overall patient survival and graft survival.

In summary, all cirrhotic patients should be studied with radiological imaging in order to detect the presence of porto-systemic shunt. In several cases, patients with large SPSS had a more impaired liver function and more frequent complications of portal hypertension[32] so these patients would probably benefit from a closer surveillance and more intensive therapy. Moreover, the identification of SPSS became crucial in selected cases, in which the embolization of large SPSS may be associated with improved survival and liver function, as well as preventing the recurrence of HE or variceal bleeding.