Esophageal cancer is one of the most poorly diagnosed and fatal cancers in the world. Although a series of studies on esophageal cancer have been reported, the molecular pathogenesis of the disease remains elusive.

To investigate comprehensively the molecular process of esophageal cancer.

This study not only revealed the potential regulatory factors involved in the development of esophageal cancer but also deepens our understanding of its underlying mechanism.

Core tip: Based on the esophageal cancer-associated RNA-seq in The Cancer Genome Atlas, we studied differentially expressed genes of esophageal cancer at various stages, constructed a protein-protein interaction network, obtained 14 dysfunctional modules, and screened Hub genes. We performed enrichment analysis to predict non-coding RNA and transcription factors as well as methylation analysis of the genes in the module. A series of regulatory factors was predicted to regulate to a certain degree the potential dysfunction mechanism of esophageal cancer, which provides new insight for future studies of esophageal cancer.

All esophageal cancer analyses in this study involving human participants were in accordance with the ethical standards of the Second Hospital of Jilin University and with the Declaration of Helsinki. A total of 40 esophageal cancer patients and healthy control volunteers, who matched for age and sex, were involved in this study. Informed consent was obtained from all participants. The esophageal cancer cell lines EC109 and KYSE70 were kindly provided by Laboratory in The Second Hospital of Jilin University. The cells were maintained in RPMI-1640 medium containing 10% fetal bovine serum.

The Cancer Genome Atlas (TCGA) is a joint project of the National Cancer Institute and the American Human Genome Research Institute. High-throughput genomic analysis technology is a useful tool for people to understand better cancer, and it improves their abilities to prevent, diagnose, and treat disease. We downloaded esophageal cancer RNA-Seq data from the TCGA database and screened non-coding RNA (ncRNA)-mRNA interaction pairs with a score ≥ 0.5 from RNA Associated Interaction Database v2.0[17], including 431937 interacting pairs involving 5431 ncRNAs. All human transcription factor target data were downloaded and used in the general database-Transcriptional Regulatory Relationships Unraveled by Sentence-based Text mining v2 database for transcriptional studies, including 2492 transcription factors and 9396 interaction pairs.

A protein-protein interaction system was constructed based on Search Tool for the Retrieval of Interacting Genes/Proteins database data (score > 500). The gene module of more than 30 nodes was screened throughout the network using the ClusterONE plug-in[18] of the Cytoscape software[19]. We use the Cytoscape plugin CytoHubba[20] to identify hub genes in the module subnet, while CytoHubba contains 12 methods for identifying hub genes. We obtained the top 10 genes and then screened the repeat genes in the 12 sets of genes for survival analysis.

The study of the functions and signal transduction pathways involved in genes contributes to our understanding of the molecular mechanisms of disease. Gene ontology function and Kyoto Encyclopedia of Genes and Genomes (KEGG) pathway enrichment analysis was performed using the R language Cluster profiler package[21]. The Cluster profiler is a bioconductor software package that provides statistical analysis of functional clustering of gene sets.

RESULTS
Identifying the expression of dysregulated molecules in esophageal cancer

Gene module analysis helps us to study the complex collaborative relationships between multiple genes. Based on the protein interaction data of the STING database, the interaction network of differentially expressed genes was constructed, and 14 functional barrier modules were explored. Using the 12 methods in Cyto-hubba, a total of 758 hub genes were identified in the interaction sub-network of the module genes, including the gene SH3GL2, which is continuously up-regulated in Module 8. Further, 23 hub genes shared by the top10 gene set in 12 methods were screened for survival analysis. The results show that GNGT2 in module 6 is the related gene (P = 0.014) (Figure 2A). A decrease in survival rate accompanied the high expression of GNGT2 gene, and the expression level of GNGT2 gene was negatively correlated with survival rate. Function and pathway are essential mediators of the physiological response of the disease. We performed GC enrichment analysis on 14 module genes (Figure 2B) and KEGG (Figure 2C). The main biological processes include positive regulation of protein transport, gastric acid secretion, and insulin-like growth factor receptor binding. The main signal transduction pathways involved are the p53 signal transduction, the epidermal growth factor signal transduction, and the epidermal growth factor receptor signal transduction pathways. These pathways play crucial roles in the dysfunctional module for the functions and pathways involved in multiple genes. 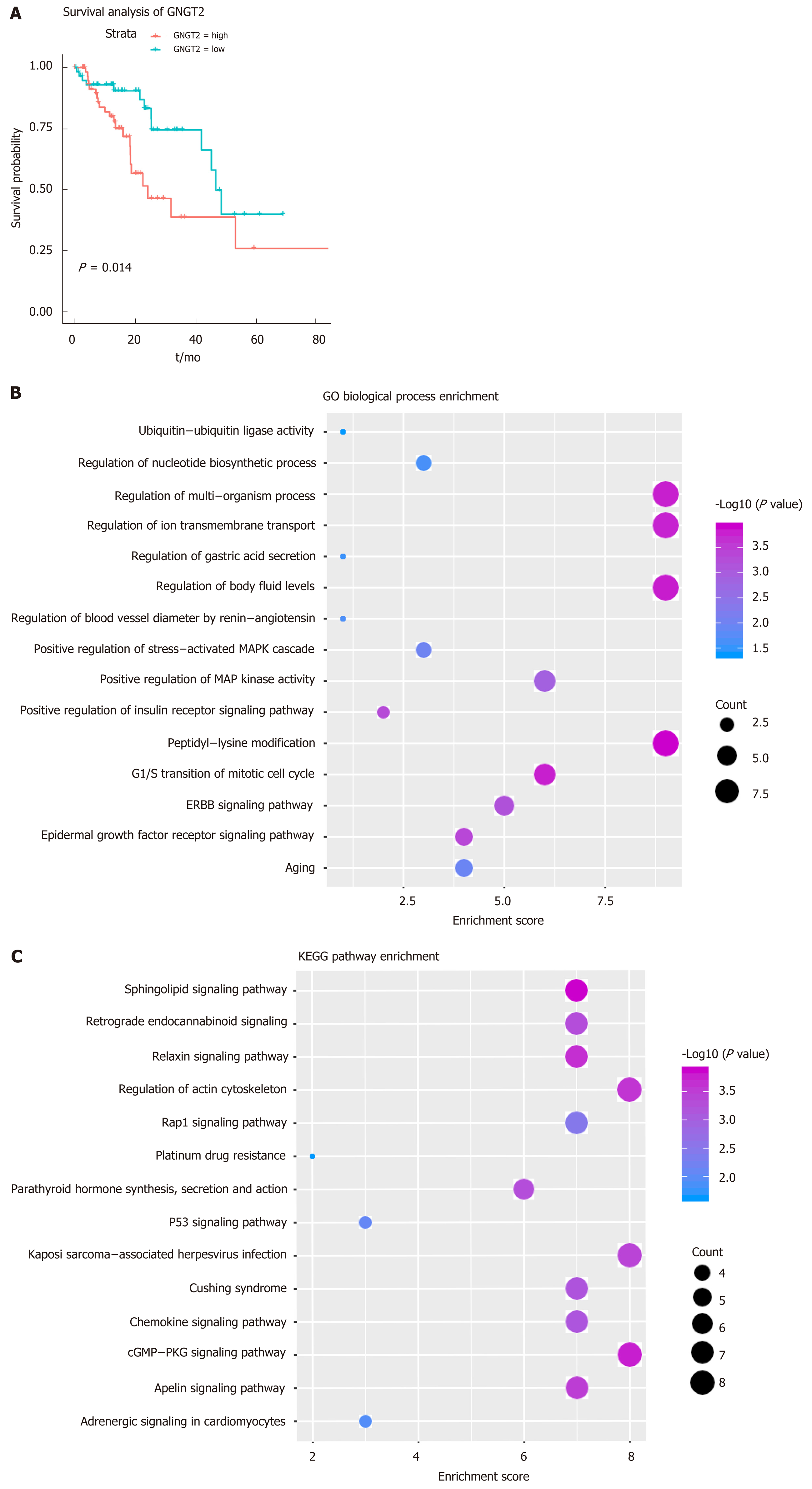 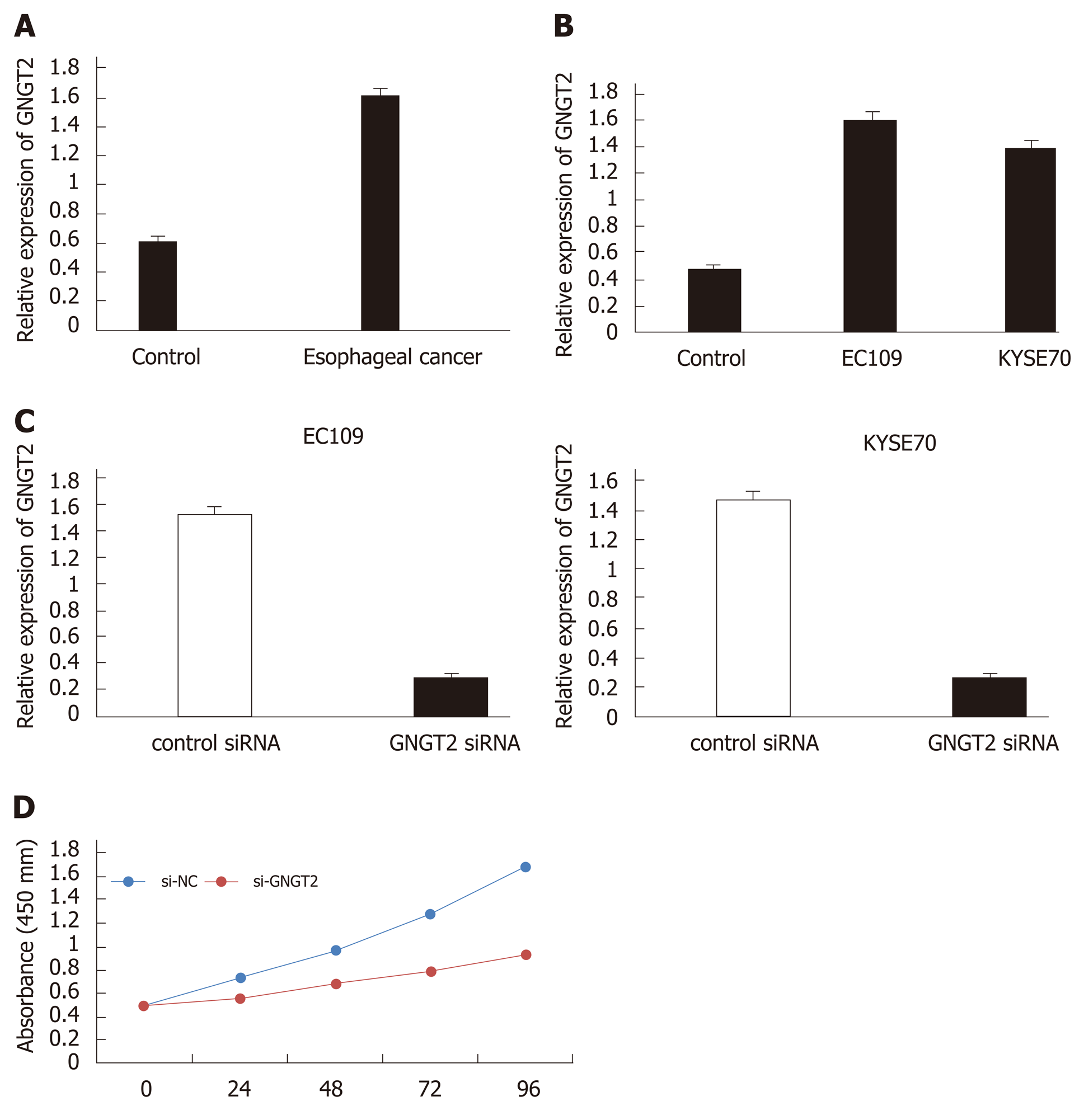 Esophageal cancer is one of the most deadly cancers, mainly because it is extremely aggressive and has a poor survival rate. Its 5-year survival rate is about 15%-25%[1]. The underlying cause of this disappointing low survival rate is that most patients have reached the late stage of disease at the time of detection. For patients with metastatic and unresectable disease, their chances of survival are limited[22]. In the present study, we collected RNA-Seq data from TCGA esophageal cancer and selected four stages of esophageal cancer disease samples and normal samples for differential analysis, and obtained four sets of time series differentially expressed genes. After screening, we found 13 common genes in four groups of DEGs. Komatsu et al[23] studied clinical biomarkers of pulmonary neuroendocrine tumors (LNET) and found that CPLX2 was strongly positive in 16.3% of the examination groups. Importantly, positive CPLX2 expression is associated with lymphatic invasion, pathological staging, and adverse disease-specific survival in LNET patients. It was concluded that CPLX2 is a novel clinical biomarker for LNET[23]. In the study of breast cancer diagnostic markers, Fu et al[24] found that changes in gene expression, such as DPEP1, may lead to cancer progression. DPEP1 has been identified as a prognostic gene for colorectal cancer (CRC). We found that DPEP1 is overexpressed in CRC. After knocking out the DPEP1 gene, cells (SW480 and HCT116) exhibited increased apoptosis and attenuated cell proliferation and cell invasion[25]. In the study of CRC, Eisenach[26] found that the expression of DPEP1 was increased in CRC tissues compared with normal mucosa. Zhang et al[27] also noted the DPEP1 gene in the study of pancreatic ductal adenocarcinoma and found that its gene expression was negatively correlated with histological grade and that lower expression of DPEP1 in tumors was associated with poor survival. Chen et al[28] analyzed the gastric cancer-associated Gene Expression Omnibus data and found that thrombospondin 4 (THBS4) was up-regulated in patients with recurrent gastric cancer and was positively correlated with the pathological stage and poor prognosis of gastric cancer. THBS4 stimulates the proliferation of gastric cancer cells. The breast-related gene explored by Huang et al[29] contains the gene THBS4, which is up-regulated in breast cancer. In the study of hepatocellular carcinoma, Su et al[30] found that knockdown of THBS4 inhibited migration and invasion of hepatocellular carcinoma cells as well as hemangiocarcinoma-induced angiogenesis. THBS4 as a target is very promising for the treatment of advanced liver cancer. Both of the above genes were present in the differential genes of the four stages of esophageal cancer in this study and were continuously down-regulated. Moreover, THBS4 was identified as a clinical biomarker gene and a therapeutic target gene in various cancers. Therefore, we can reasonably speculate that this gene plays an important role in the occurrence and development of esophageal cancer, providing a reasonable direction for further study of esophageal cancer.

The results of the methylation test showed that the SST gene was up-regulated extensively, which may be a key gene involved in methylation modification to regulate the progression of esophageal cancer. Jin et al[31] found that hypermethylation of the SST promoter is common and is associated with early tumor progression in Barrett's esophagus. The SH3GL2 gene is up-regulated. The gene is not only the common DEGs of the four-stage time series but also the Hub gene in module 6. It also may play an important role in the regulation of esophageal cancer by methylation modification. Ghosh et al[32] studied the effect of SH3GL2 methylation on the pathogenesis of head and neck squamous cell carcinoma, and abnormal SH3GL2 is an independent pathway for early developmental abnormalities of the head and neck.

Esophageal cancer is one of the most lethal malignant tumors in the world. In the past decades, although the treatment methods for esophageal cancer have improved, the overall efficacy is still poor.

Exploring the molecular process of esophageal cancer comprehensively and deeply.

Overall, our work describes in detail the role of multifactor-mediated dysfunction module in the whole process of esophageal cancer, identifying key genes for staging and related biological processes, which may help to identify potential molecular mechanisms and therapeutic targets for the deterioration of esophageal cancer.

This work not only helps us to reveal the potential regulatory factors involved in the development of disease but also deepen our understanding of its deterioration mechanism.